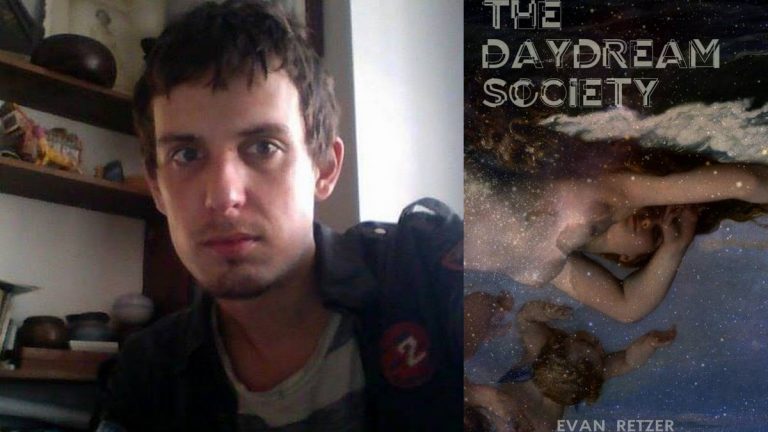 We recently had the chance to read and review Evan Retzer’s debut novel, The Daydream Society. It’s the kind of book that takes the interests of beat literature and puts a refreshing spin on them. Retzer was kind enough to join us for a few questions.

One of the major themes of The Daydream Society is how time may exist and the possibility of accessing voids in time. Is this an idea that has always interested you or did you begin thinking about it for this novel? How do you feel the drugs used by the characters in the story complicate this question of time?

The idea of our perception of time being non-static has intrigued me, probably since I first took psychedelic drugs; possibly earlier. I think it’s an important facet of the story that the characters’ awareness of their nonlinear storyline begins with the ingestion of Felix’s mystery drug—up until this point, they may have been drifting through time for who knows how long? Maybe it took the ingestion of Felix’s psychedelics to get them to realize how this was happening to them. Really, it’s an idea that’s been percolating in the human subconscious for several millennia, the idea that there’s a void, an emptiness, inside of ourselves and inside the things around us.

Various people have called that emptiness sunya, the holy spirit, truth… Essentially, if reality exists as a waveform, an active vibration, then what happens—and where are we—between each oscillation of this reality wave we’re on? And what if we could jump between the positive peaks of the wave; could we skip across entire moments of time? This thought was really central to the development of my novel as a concept. The first draft of The Daydream Society, once I began transcribing it to the computer from my notebooks, was saved as a file timelapse.doc. When you’re having experience of dreaming, of the memory loss that comes with dementia or just with ageing, when you’re having the experience of taking any kind of mood-altering substances, you tend to sort of lose gaps of time—those periods where you can’t quite remember what, if anything, you really did. These are the kinds of experiences and questions that can lead a person to wonder: maybe there’s something more to this going on, something more than just what seems to be happening on the surface.

The majority of this novel is based in New Orleans with ventures to Boston and Alabama. What is it about New Orlean that made you want to place Silas and his group there? I can imagine that the lack of a traditional timeline occurring in the book would make the writing process much different than for other books, in both positive and negative ways. How did you tackle creating the sequence in which the events would go?

Honestly, I want to say that the novel is pretty much located in places where I’ve been, but that answer is too easy. Why Silas and his friends are in New Orleans, really? It’s the grit and the raw ambivalence of the city that pulled me toward locating The Daydream Society there. It’s only in a place like New Orleans where this kind of lunacy can go down right under everyone’s noses, and still the reader can find it totally believable that no one around Silas is giving him even a second glance.

Since The Daydream Society follows a nonlinear narrative, the writing was easier in one sense—when I finished a scene, I was free to jump ahead (or behind) in the storyline to any other scene involved in the drama of Silas and company. Naturally, the trickiest aspect was keeping things lined up from a linear perspective; if you were able to follow it scene to scene before their memories got all jumbled. Here’s a fun trick for the reader: my novel actually can be reorganized and read in a way where events transpire one following the other in actual time. Throughout most of the narrative, anyway. Where this gets especially confusing is during the events directly surrounding what happens to Cyndi on November 7th, as the novel both begins and ends, really, on this date. An alternate perspective might be that the entire work actually occurs on November 7th; and Silas is sort of cycling back through his memories, trying with difficulty to piece together a linear progression of how and where things went wrong.

While reading The Daydream Society I noticed there was a lot of emphasis on the characters’ eyes. Is there something about eyes that fascinates you?

I suppose I have always kind of believed  that somewhere inside of everybody, there’s a kind, gentle person. A child. And maybe the eyes are the key to finding that person, like if I stared long enough into someone’s eyes, maybe I could really understand who they are, feel what it is to wake up in the morning and be them. To have to live their life. Even the most messed up person, you know, once stared blankly up at their mother with the child’s sort of innocent eyes…

There is a very evident tie between your novel and postmodernism. What is it about postmodernism that inspires you?

I feel inspired, honestly, by so many genres. But what I like about postmodernism in particular is its emphasis on the aesthetic of the art over even the storyline or content. Makes for an enjoyable read, especially while in a state of mind where what you notice first is the aesthetic, rather than the meaning, of a thing.

On a similar note, is there a specific work or author from that movement that influenced you?

In 2010, I was rereading William Burroughs’ Nova Express from a small rented room in Earl’s Court, when a hallucinatory idea hit me that every passage in the text was actually written about the functioning of the various parts of a single human body; each line, each idea was a metaphor for the state of the individual under the influence of, or withdrawal from, certain chemical intoxicants. Later, after rereading again and regaining an understanding that this is not, in fact, what Nova Express actually is, I thought, what if there were a book which was in it’s entirety a metaphor for chemical reaction in the body? This thought became the inspiration for the book within a book, Silas’ little black codex The Daydream Society.

I read that the character Marcel was created from a combination of two people you know. Are any of the other characters based on real people? More specifically, was the Timemaker based on someone in real life?

Many of them were; I was just discussing this with a friend tonight. The Timemaker was actually modelled after and originally inspired by a gentlemen from the Portland, Maine area who, despite or perhaps because of heavy creative modification on my part, shall remain anonymous. He was not Russian, and the tattoo on his forehead was something other than an ouroboros. He also had an Iraqi stripper girlfriend with a real loud sex voice, which the Timemaker does not. However, the Timemaker’s real life inspiration did introduce me to Swans, just as Nikoli does Silas in The Daydream Society!

The novel is framed, in a way, around the book that Silas carries around, also named The Daydream Society. Did you find it difficult (or maybe strange is a better word) to create a book within a book? Without spoiling how it all fits together, what do you feel this in-text book was able to offer to Silas?

The most difficult part about it is in trying to discuss it! Creating it was easy; it was: in this next scene, one of the characters flips to and reads from the book, which is demonstrated by writing out the page from which he is reading. The in-text book offers Silas the sort of center or sense of balance which his life is otherwise lacking during the events of the novel. Naturally, he later discovers how the trainhoppers he meets have been using the book to get around, and how he may use this to his own advantage.

So I know The Daydream Society was just released on December 2nd, but do you have any other projects in the works?

Nothing is organized to the point of being able to say it’s “in the works.” However, I will spill it to you that the next big project I am close to completing is a full length rendition of my short story Tsun Kyankse’s Cat. It’s sort of a second coming of Jesus as a depressed Mexican carpenter. During his battles with suicide, he makes friends with an unlikely hallucinatory companion: a monk’s spirit placed inside the body of a Burmese cat. In this work I’m addressing a question which has felt pressing to me for a long while:  what happens when you live on, long after you were supposed to die? Also, more playful sorts of questions, such as, can Jesus Christ kill himself? Or wouldn’t he just, sort of, rise again? To the cautious reader, I wouldn’t say this book is going to be sacrilegious so much as it is simply irreverent.

And, to wrap things up, what would your six-word novel be?

Beyond glossolalia — spirit bite shatters throughout.