Boomtown's recently appointed sustainability officer talks to us about how Boomtown is getting greener. 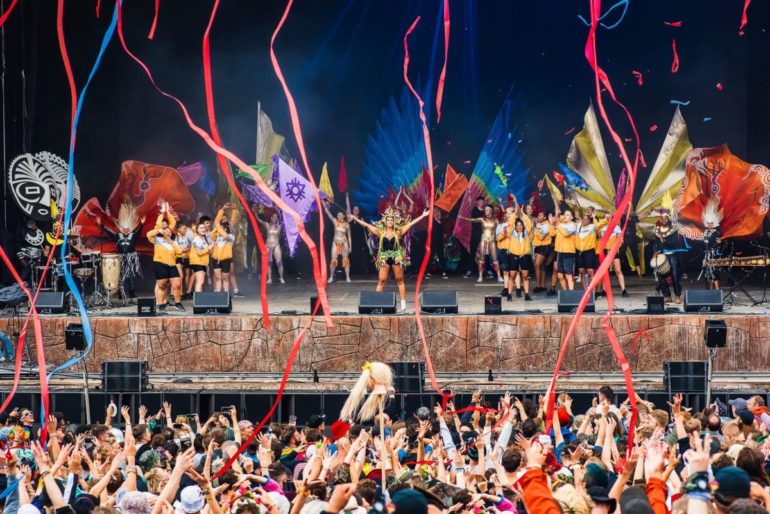 Environmentalism and festival culture are almost inextricably linked. At their heart, many festivals represent a utopian vision of society – balanced, vibrant, brimming with culture and free from prejudice. You would think then that sustainability would be an almost inherent side-effect of many festivals, but sadly this isn’t the case.

Every year, the joyous swell of Glastonbury is dragged back down to reality as the images of a trash-strewn wasteland of abandoned tents sweep across the internet. Granted, Glastonbury is one of the largest festivals in the world, but even smaller events are not safe from waste, traffic and land damage. In 2010, a report by The Guardian revealed that 500 UK festivals produced 84,000 tonnes of CO2 per year.

Even beyond tent abandonment, seemingly minor infractions can use a lot of problems when multiplied by a festival-sized crowd. Another report by The Telegraph spoke of the damage done to local wildlife (especially fish) when people decide to avoid the portaloos by sneaking off into the bushes to relieve themselves. Everything adds up, and with the festival scene growing faster than ever before, the sum total is getting dangerously big.

Anyone who attended Boomtown last year will know that it ended with a potent statement about the cost of irresponsible behaviour at festivals, and challenged everyone in the crowd to be better. Details of Chapter 11 have been revealed piece by piece, but one clear motivation running under everything has been a tight focus on sustainability, and this won’t be a one-time thematic outing, this is forever.

“This year’s theme is all built around consumerism and throwaway society – we can’t carry on consuming in the way that we are. It’s about acting now and making significant changes to protect our world and our future, and the hope is that as a festival we can inspire people to make positive change not only at Boomtown but in their lives at large.”

Emily has been on the sustainability team with Festival Republic since 2017, working with Download, Wireless, Latitude, Electric Picnic and a number of large scale festivals across the UK. “I’ve been working for Boomtown for 8 years working in production and project management roles. I started working as their Sustainability Coordinator in April 2018 focusing on reducing the festival’s environmental impact and working with everyone in the company addressing the key impacts and collectively coming up with innovative solutions to reduce them.”

“All festivals have a campsite waste issue, sadly we’re living in a throwaway society that is so obvious at festivals on the Monday morning. A big part of the issue is the fact that retailers are selling tents that aren’t made to last which leads to them being abandoned. We really want to raise awareness about  single use tents, encouraging festival goers to buy a more durable, lasting tent to reuse again and saving money in the long run. We’ll be launching a huge campaign this month, firstly just through our own resources at Boomtown but further ahead the plan is take this messaging industry-wide.”

Rather than being ring-fenced to specific events, the push to make festivals more responsible has resulted in the development of a consortium, with sustainability officers across the UK in constant communication. “We had a big roundtable meeting with about 20 different festival organisers to really tackle the campsite waste issue, and the upshot was that we need to have a unified message.” She recounts. “Last year we supported  the Drastic on Plastic pledge to reduce the use of plastic straws, and we’re following on from that – figuring out the best way to reach people in that target demographic. People just aren’t aware, there’s this big misconception that tents left on sites end up going to charity. That simply is not true, so that’s one example of something we need to educate people about in order to incite behavioural change.”

The long term waste reduction goal for the entire industry is a 50% drop in carbon footprint by 2025, and the plan is for that to encompass not only the UK but Europe as well. Looking specifically at Boomtown, they reached a 38% recycling rate last year, and they’ve set a target of 50% to align with the 2025 pledge, but Emily believes that they can hit that target within the next three years.

“We are introducing an Eco Camp in our most popular campsite in Downtown where we’ll have a number of initiatives to influence zero waste lifestyle at the festival and at home. These include – workshops, NiftyBins and The Festival Bin Investigators who will be helping campers live by the Eco Camp ethos.” Emily explains. “We’re joining forces with the Eco Warriors for our third year, to help reduce the impact the festival can have on the environment by sending a large team of enthusiastic volunteers around the campsites to engage with festival goers about the environmental initiatives at the festival, handing out recycling bags and encouraging people to pack their tents home on Monday morning using games and rewards throughout the show. Also to help stop the tide of plastic pollution, we’re also banning the sale of single use plastic bottles at the festival.”

One of the best things about Boomtown (one which we’ve very much aware of here at CV) is that it’s a narrative driven festival – its story permeates every level of its infrastructure, and as such it provides an ideal proving ground for environmental messaging. “You’ve got 60,000 people coming in and you’re trying to fundamentally change the current throw away culture we are all a part of, and there’s only so far you can go with radical policies, you have to lead with an educational approach, but there’s always an element of that which is just putting your faith in people to the right thing.”

This month, there will be a vast amount of campaigning to help ensure that when summer rolls around, people are in the right headspace, but the work isn’t just geared towards the attendees. Festivals need sites, and taking proper care of the sites means engaging with the people who actually live there.

“We’ve partnered with WinAcc, who are a local environmental charity, and every year we run a donation scheme on the tickets giving people to the option to donate to them when they purchase the ticket. We have a local community officer who lives in Winchester and has been with us for years, and we had a priority this year to prioritise local businesses and vendors, they all have to be within a 100 mile radius, so it all ties in to building and maintaining local support.”

Open communication and collective planning are both vital to this push, but Boomtown is a particularly interesting case because it presents a unique opportunity to refine the way the messaging reaches people. The work Emily and the rest of the team are doing is already catalysing a huge change in the industry. “We’re just starting on our journey to reduce our environmental impact. We’re all in this together, and we hope to share our learnings with our citizens along the way and make it easy for everyone to reduce their individual impacts too through our interactive initiatives at the festival.”