Three dragons, thousands of zombies, and millions of dollars in, and this is the way the show ends. Not with a bang, but with a whimper. 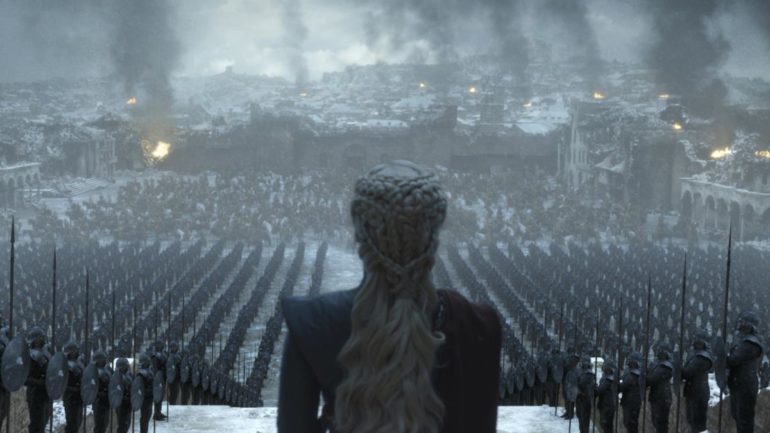 ‘…and now his watch has ended.’
– traditional saying of those who’ve just finished a TV show, or something

73 episodes – most an hour, some pushing an hour and a half – over three days’ sustained fantasy drama – all comes down to this. And for a show that was originally going to be billed as ‘The Sopranos in Middle-Earth’, it ends on a…remarkably uncomplicated note.

After last week’s atrocities, ‘The Iron Throne’ gives us the usual sobering look at the wreckage, including, yes, everyone’s favourite shorthand for ‘something bad happened’, a child’s body next to their dropped toy. This is step one in a series of narrative decisions which all seem to be retroactively justifying Daenerys going bad, which are all filmed at excruciating length and consist largely of people walking through rubble over sad string music.

This culminates with a ludicrously on-the-nose discussion between Jon and Tyrion that couldn’t be more clearly directed at the viewer. ‘Everywhere she goes, evil men die, and we cheer her for it’ – see? See, presumed viewer? Get what we’re saying? You got sucked in, didn’t you? We tricked you into rooting for a monster, how does that feel?

Notwithstanding that making evil men die applies to basically all the protagonists the show’s ever had, this isn’t as impressive a sleight of hand as the show seems to think. You could probably name a dozen shows in which the core concept is that the audience roots for a monster, with no trickery required. I’ve already named one, The Sopranos, in this review. Admittedly that isn’t quite fair, as The Sopranos had audiences gleefully cheering on a whole gang – literally a gang – of monsters, and because of that, by necessity it had to deal with the fact that there were degrees of monsterhood. James Gandolfini’s Tony Soprano was a cold-blooded killer, but had sympathetic qualities. Qualities such as ‘doesn’t burn down New Jersey, the fiefdom he’s hoping to run, given the chance’.

Game of Thrones doesn’t give us that complexity, a phrase which would be shocking to anyone who’d just started the first season. Daenerys is now uncomplicatedly evil – or, apparently, always has been – and that’s that. There is no particular reckoning with the fact that the rest of our protagonists threw their lot in with a mass-murderer, they simply note it, wash their hands of it and move on. It seems they must remain uncomplicatedly good, and nothing, not even killing their monarch in cold blood, can change that.

You may remember this as the whole reason Jaime Lannister’s character was so morally grey. Yes, he’d broken a vow and murdered his king, but he did this to prevent any number of deaths. There was a whole scene about it. It made us ask questions, like ‘does this outweigh the bad things we’ve seen him do?’, it wasn’t a ham-fisted way of proving that he was outright evil all along. The only questions raised here are more along the lines of ‘what? No. Why?’

What actually helps the audience swallow this whole plot dynamic is what comes next, when the remaining lords and ladies of Westeros convene to decide on a new ruler. This is done with a fairly lackadaisical attitude towards the realities of feudal politics. Sam, still ever-so-earnest and naive, suggests a true democracy, which sets the assembled nobility off laughing – but, for some reason, this brazen snobbery of the born-to-rule class doesn’t infuriate former slave Grey Worm, or ennobled commoners Gendry and Davos. Likewise, Sansa includes the deal-breaker stipulation that the North must remain independent, without prompting a peep from the representatives of the Iron Islands and Dorne, both fiercely independence-minded provinces of Westeros.

But these are petty concerns compared to Tyrion abruptly declaring that Bran – who’s had, at a generous guess, ten lines of dialogue this season – should be king. Admittedly, being able to see into the past and possess other living beings are incredible powers and would have any number of uses for a king, so it’s a shame Bran hasn’t done either recently. And, appropriately, these aren’t actually cited as reasons to put him on the throne. Per Tyrion, the reason is that Bran has the most interesting story, as if kingship is an audition for Big Brother.

(And speaking of Big Brother, there are of course downsides to a head of state who can spy on anyone at any time.)

The casual viewer will likely be wondering why the show bothered with all the groundwork of making Jon the secret Targaryen heir if they’re now going to jettison him in favour of someone who’s nowhere near the succession, and they’re completely right to. That development now seems like a curiosity, intended purely to add a taboo frisson to his relationship with Daenerys. Granted, he never wanted the throne, he’s been saying ‘I don’t want it’ like a speaking clock for the past six weeks, but that’s also Bran’s reaction, which bothers nobody.

Gendry, as Robert Baratheon’s legitimised son, also has a far stronger claim to the throne under the rules of dynastic politics as established, but I bring him up for another reason, because what the show’s given us seems to be proving, more than anything, that the long-dead Robert Baratheon was right all along. Yes, on their own the Dothraki would have been useless in a siege. Yes, it was fear and blood keeping the kingdoms in line (a maxim dangerously close to the Targaryens’ own ‘fire and blood’, which somehow didn’t make him a villain). And yes, as the narrative has it, he should have had Daenerys assassinated to prevent far greater bloodshed later.

Despite Gendry being reduced to an extra, Bran proves to be a fitting heir to Robert Baratheon by immediately noping out of attending small council meetings – leaving Tyrion and Bronn to crack wise about brothels, forever. Again, this is presented as an uncomplicated good rather than the realm’s executive body being at cross purposes. It bears more of a hallmarks of a sitcom, where Tyrion and Bronn provide feedlines that Brienne, Davos, and Sam roll their eyes at in exasperated fashion, than a serious drama. As the camera pans away, you can practically hear the laugh track.

(This is a curious point about showrunners David Benioff and D.B. Weiss. I haven’t held back about what I think of their tenure on Game of Thrones, yet they’re also responsible for a genuinely good episode of the comedy It’s Always Sunny In Philadelphia, ‘Flowers For Charlie’.)

George R.R. Martin has always been clear that the series will have a ‘bittersweet’ ending, and the remaining Starks being split up again would seem to fulfil that. After all, they’ve spent most of the last ten years trying to find their ways home, and their reunions were some of the clear highpoints of the recent seasons. Yet the final montage of them taking their respective places would seem, once again, to be portraying this as straightforwardly good.

For Sansa, becoming queen of an independent North, this at least makes sense. Arya, however, is sailing off on what may well be a suicide mission, and Jon appears to have immediately broken his renewed Night’s Watch vows to go off with the free folk and learn their ways. So, the latter two can at least make a claim to bittersweetness, even if the background music is trying to tell us otherwise. But Jon does at least get one last bright spot – finally giving Ghost a pat. To pet the dog is well-established shorthand for ‘good egg’, and Jon’s done it, three episodes late. Good for him.

(The CGI there is at least fairly seamless, unlike the earlier scene of cartoon peril Drogon nudging Daenerys’s body, where you just end up idly thinking ‘that’s clever, how do they do that?’)

The fates of the Starks seem to be harking after Lord of the Rings, and Sam Gamgee’s ‘well, I’m back’, even if that’s only applicable in two cases out of four. On the level they’ve ended up somewhere they can be happy with, it kind of works, but Rings’s point was that you can’t simply go home. Sam and Frodo ended up irrevocably changed for all their adventures, and not necessarily for the better. Yet here, all the events of Thrones are brushed off, as though they had no long-lasting consequences, and you can simply close the book. True to form, Sam presents the maester-approved hardback history of the events of the show, under the weird title ‘A Song Of Ice And Fire’, which somehow doesn’t even mention Tyrion. Again, laugh track.

Speaking of laugh tracks, the predictions I made in my review of the season premiere turn out to have been, at best, mixed. No, Jon, Daenerys, and Tyrion didn’t go out in a great act of self-sacrifice to beat the white walkers, and while the throne room did get wrecked up, that wasn’t snow covering the ground. (For the record, Daenerys’s vision quest in season 2 showed icicles on the furniture.) However, Daenerys did die, even if it wasn’t nearly so glorious. I absolutely called it on Westeros becoming Balkanised, even if it wasn’t as completely as might have been expected, and yes, it’s now Bran taking the lead on rebuilding the country. What’s that, three for two? I’m chalking that up as a win.

– For all that Jon, Sansa, and Arya’s final scenes discount the weight of everything that’s gone before, they are at least uplifting. Provided you don’t think about any of it too much.
– Ghost finally getting a pat, for being a good boy.

– The music and staging trying to present Daenerys’s opposition to chattel slavery as horrifying extremism.
– The sluggish pace, especially in the first half, of a 79-minute-long episode. I’ve always praised the production values, but they can’t sell a scene on their own.
– The seemingly arbitrary decision to put Bran on the throne, coupled with the fact that the bookies called this weeks ago. This is probably down to the extensive plot leaks, but still, am I missing something? Are the writers and the bookies crazy in exactly the same way?

READ NEXT: The Game of Thrones Finale Is Already IMDb’s Worst Ever Thrones Episode 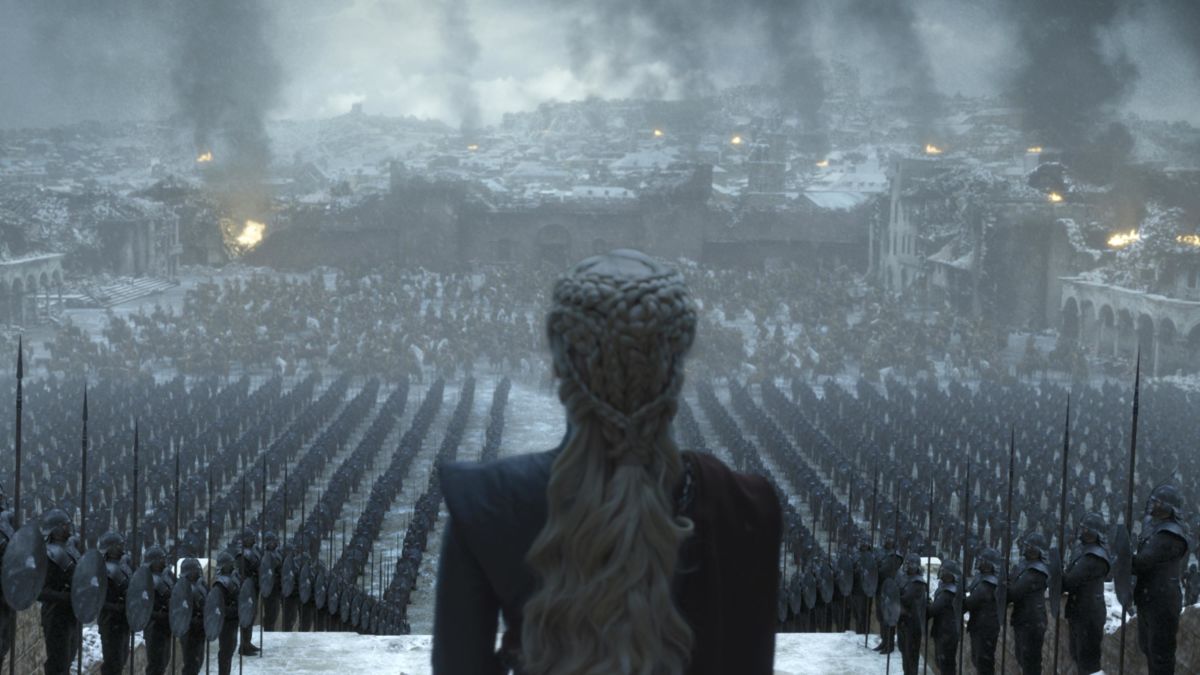 Verdict
Finales should leave you needing a moment to take it all in. All 'The Iron Throne' will leave you is either laughing, groaning, or wondering what's on the other side.
4
Cultured Vultures is a pop culture website established in 2013 covering all things gaming, movies, and more. We eat your words.
All The News On The Biggest Games