"I don't even have the energy to complain anymore. The ending sucked. That's it." 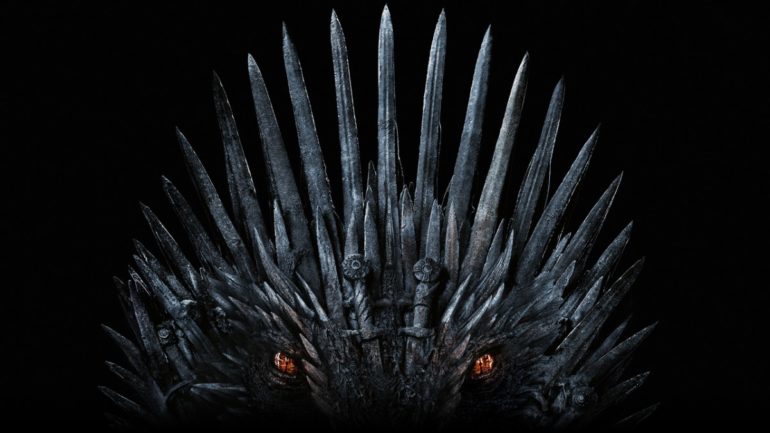 After ten years and eight seasons, it’s all come down to this: The Game of Thrones finale. The place on the throne has been decided, but what have the fans decided? Well, let’s just say it’s about as popular as Ramsay Bolton was.

The finale, which begins in the immediate aftermath of Daenery’s actions in episode 5, continues the downward slump started by ‘The Long Night‘ in Game of Thrones Season 8. Since The Night King was so easily dispatched of, the show’s poor writing and amnesiac characterisation has come under heavy scrutiny with both ‘The Last of the Starks‘ and ‘Bells‘ not going down to well on IMDb and Rotten Tomatoes. The former was the show’s worst ever reviewed episode on IMDb, but the finale, ‘The Iron Throne’ has already overtaken it.

A large amount of the written user reviews give the episode a possibly dramatic 1/10, a lot of them in disbelief that the leaks were actually true. As the credits rolled, Bran was the ruler of Westeros, Jon was sent to The Night’s Watch, Arya was going off on a grand adventure, and Sansa was the Queen in the North.

Sorry, but this season leaves a bitter taste in a avid fan’s mouth. In Breaking Bad, you could see Walter’s descent into a villain and he gets his due justice at the end. You can rewatch Breaking Bad and pick on the clear development. Not here in Game of Thrones.

Shame on you Dan and Dave.

Wow. Everything in this episode was so bad I’m actually still in shock. Every single scene in the entire episode was so forced. Not a single character did anything that even remotely made sense for their character.

I’ve tried to be reasonable and give episodes 3-5 ratings of 4 or 5 stars or so. But honestly I don’t think there is ANYTHING in this episode that warrants a score higher than 1/10.

I’ve been with this show from the very beginning. I watched in awe as Ned Stark was beheaded, the red wedding came to a bloody climax, Jon Snow was betrayed and stabbed to death for doing what he thought was right. None of that was ‘subverting my expectations.’ It was good, quality storytelling that stayed consistent with the progression of each character’s storyline and showed who the characters were and would do. In this last season, we’ve seen characters act out in ways that are completely inconsistent with how they’ve acted the entire series prior. We watched the story arcs of Jaime, the hound, and Dany all become completely null and void. We watched Jon Snow become a glorified extra, demanding the question why he was even brought back from the dead. We watched the night king become a B-movie villain. We watched the character assassinations of greats like Varys, Cersei, and Tyrion. We did not get one semblance of a satisfactory ending and there’s nothing you can say that will justify this lazily thrown together abomination that is game of thrones season 8. This show now officially has the worst ending of any show in the history of television and we’re right to be angry.

I’m certain I won’t be watching it again, thought the same when S8E3 came out, but I gave the show benefit of the doubt. Now I’m certain. There’s no fun rewatching it when you know how disappointing the ending will be. Thank you D&D. To the amazing actors and the rest of the crew: You did an amazing job. Those reviews aren’t for you.

And a final one from justinfernandez-38976, who kind of sums up my own feelings about how the show wrapped up:

I don’t even have the energy to complain anymore. The ending sucked. That’s it.

We will keep this updated as and when IMDb manage to sift through the thousands of reviews that are no doubt pouring in as we speak. The fans are certainly being outspoken: To the best of my memory, ‘The Bells’ only had half as many reviews at this time last week.

This is a “just for fun” comparison as they are two different shows, but Dexter’s finale, reviled as the worst ending in TV show history, is at a 4.7/10 on IMDb from 15,779 ratings. The past three episodes of Game of Thrones have historically waned significantly in the ratings on IMDb as the hours pass, so ‘The Iron Throne’ could even go on to “overtake” Dexter.

Over on Rotten Tomatoes, the fans are being similarly disappointed in ‘The Iron Throne’, dragging the overall reception for Season 8 down to anaudience score of 37%; RT does not allow individual episode reviews for whatever reason.

The critics have also been unkind to the finale, but not quite so much as ‘The Bells’ at this time of writing, though it is still “Rotten” with a meagre 57%. This quote from TV Line’s review kind of sums up the writing for these last few episodes as a whole:

Wow. Drogon understood more about the geopolitical power struggle and human weakness than I would’ve thought he did.

So, what did you think of the Game of Thrones finale? Is it getting unfairly hated or did it jump the shark before sailing into a hurricane?

At least Jon finally ended up showing Ghost some goddamn respect, is all I’m saying.

*we’ll update the rating down here whenever it is itself updated. 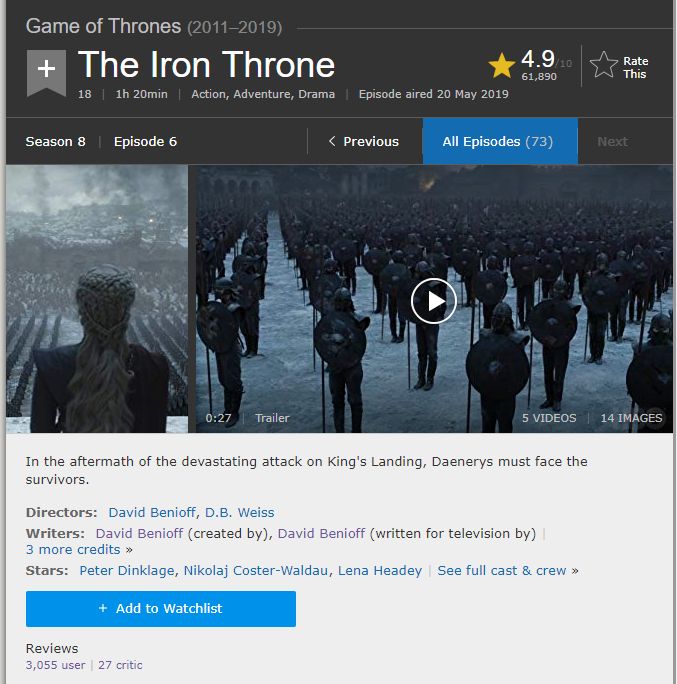 It’s closing in on Dexter. Ooft.