This is what we've waited for. This is it, boys, this is war. 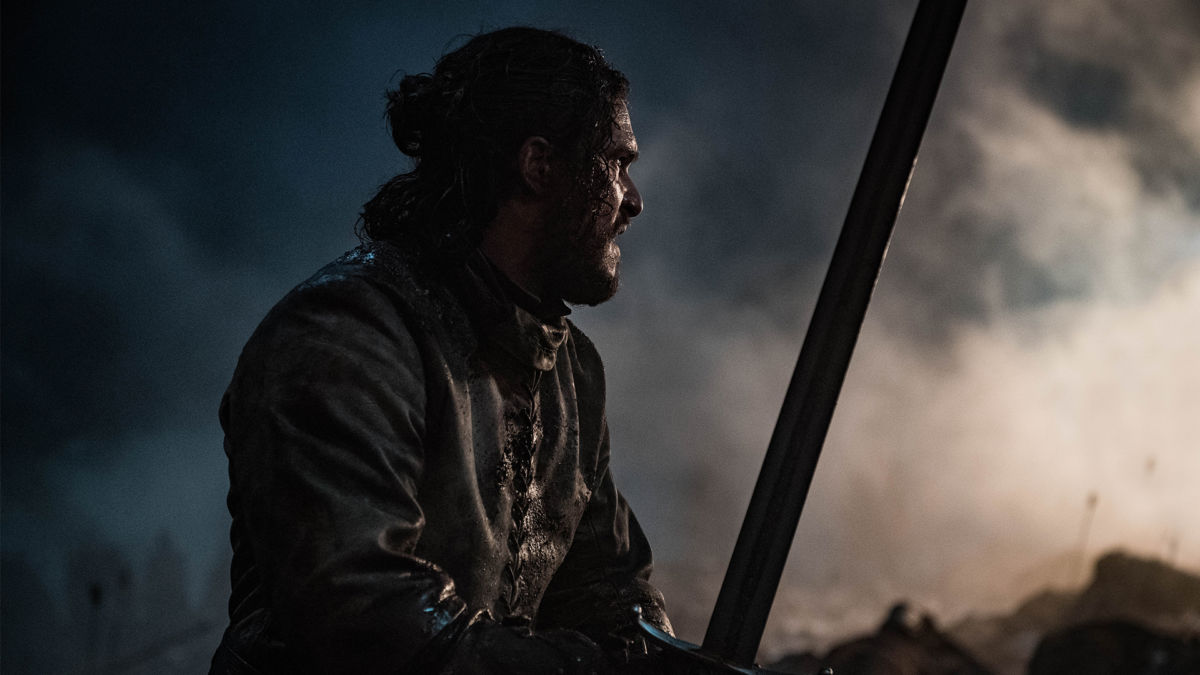 “Overhead, without any fuss, the stars were going out.”
– Arthur C. Clarke, ‘The Nine Billion Names Of God’

After last week tried to aim for ‘the calm before the storm’ and instead hit roughly on ‘medieval club 18-30 holiday’, this episode manages to set the tone more effectively in less than ten minutes, when the first charge reaches past all the ordinary battle tropes and grabs hold of outright horror instead. Melisandre sets everyone’s swords on fire, they’re all getting revved up, woo-hoo we might actually win this thing, and they go charging off, and then…those points of light winking out one by one, eaten by the darkness, hammers home the existential threat represented by the army of the dead better than any number of actors glowering from under blue latex.

There was a moment when my addled mind believed that this wouldn’t even be a battle in the standard sense – just our protagonists sending wave after wave of troops into the darkness, and none of them coming back. But then a few lucky stragglers came back into the light. Not many, of course, only a few shell-shocked horses and the one named character who’d gone out there, and then normal service resumed. Insofar, of course, as you can call the battle the entire season so far has been leading up to ‘normal service’.

The show’s history with major battles runs the gamut between the Battle of the Blackwater, a set-piece siege which made it clear what was going on where, and the Battle of the Bastards, where both sides lined up and then ran at each other. ‘The Long Night’, I’m happy to say, comes far closer to Blackwater in all but two respects. Firstly, when the battle gets up close and personal, it gets into the rapid-fire jump cuts beloved of seemingly all modern action scenes – annoying, but still able to communicate the living’s constant retreat under pressure. And secondly, there’s a giant.

This last isn’t just a ‘hey, look at that’. Quite apart from the battle itself, ‘The Long Night’ deserves some points for being the episode which finally remembers that Game of Thrones isn’t just dung-age misery, there’s a vein of fantasy running through it, low-key but definitely there. This has been notably absent from this season so far, so it’s a very welcome return. Melisandre wheels out the fire magic, the dragons are there in full effect, the opposing force is of course led by ice demons, and yes, there’s a giant knocking people aside like skittles.

The hype for ‘The Long Night’ proudly declared it to be a battle longer than Helm’s Deep in The Two Towers, but Game of Thrones’s advantage over Lord of the Rings was never length (though God knows it has that), it was the fantastical. And, to a lesser extent, the gritty sexuality. Even though it involved wizards and had a secondary front fought by living trees, Helm’s Deep was primarily two groups of humanoids fighting each other with swords and arrows. There were no giants and dragons there to break up the outline, and even with the orks’ overwhelming numerical advantage, they could never be quite as despair-inducing as an advancing zombie horde.

No, basically all of Thrones’s remaining fantastical elements are on prominent display in ‘The Long Night’, and that’s to the episode’s strength. The only letdown in that department is Bran’s ill-defined mind-powers – it’s not that he doesn’t use them, he does, he possesses a flock of ravens and has them fly about briefly. But then they get fried by Viserion, and apparently that’s enough to make him throw up his hands and give up, despite all the advantages they could have offered. No bird’s-eye-view, no real-time tactical advantage, he doesn’t even have one of them try and peck the white walkers’ eyes out in a desperate hail-Mary play.

There’s also a bit more siegecraft on display in ‘The Long Night’ than there was at Helm’s Deep, although it’s not all good. The lines of defence outside the castle walls, the stakes and the fire-trenches, that’s all fine, that makes sense. Helm’s Deep had one major defensive line, and suffered for it when that got blown up. What makes less sense, though, is Winterfell’s catapults being positioned directly behind their doomed cavalry, practically on the front lines, where they are duly and promptly overrun. To cite another battle sequence from Lord of the Rings, remember how Gondor put their catapults on their walls, rather than outside them?

The most obvious Lord of the Rings comparison, though, has to be the final battle outside the Black Gate. You’ve got the good guys being completely surrounded and at a steep numerical disadvantage, their backs to the wall and every swing of their swords seeming more hopeless – but crucially, you’ve got this all being a bizarre distraction from their secret plan to take out the main baddy and knock out the entire opposing army in one fell swoop. And, like Lord of the Rings, you’ve got an unlikely, diminutive figure being the most instrumental in making this happen.

In fact, despite Peter Dinklage coming up first in the credits, and Jon and Daenerys having the most obvious protagonist qualities, there’s a strong argument to be made that Arya’s the main character here. Tyrion gets relegated to the crypts, and Jon and Daenerys start off, and spend big chunks of the episode, cut off from everything else that’s going on. Arya, by contrast, is in the thick of the action throughout, gets the variety of both straight-up action and her stealth mission in the library (if ever a scene was made for a video game adaptation), and interacts with more people. She’d probably have made better use of a dragon, too.

The main criticism to be made of ‘The Long Night’ is nothing to do with the episode itself, but rather what it represents for the wider plot. The white walkers were always, always framed as the main antagonists, with the squabbling over the Iron Throne being a distraction. That first cold open of the Night’s Watch going out beyond the Wall, and getting jumped by the wights, that wasn’t just the show showing off its fantastical elements: that was foregrounding the most significant threat present, a threat to all living beings.

There’s a line in the first book where Jeor Mormont says ‘when dead men walk in the night, do you think it matters who sits the Iron Throne?’ – and if you have a counterargument, I’d like to hear it. While that one didn’t make it into the show, they did have Jon bluff his way into the wildling army by declaring he wanted to be on the side that fights for the living – leant even more significance by replacing a book line where he had a moan about being a bastard. Granted, this was a bluff, but it was also coming from the man who’s our nearest thing to a classic-model fantasy protagonist, and turned out to be the secret royal heir. When he says something, it’s meant to be significant.

Remember Daenerys’s vision-quest, when she saw the Red Keep shattered and full of snow? That, too, was clearly meant to foreground the grinding background threat of the white walkers – that they’d sweep all that way down South, and take out everyone, no matter what noble house they were fighting for. And now that weightiest of plotlines has been cut short with one thrust of a knife. Without that, whatever’s left runs the risk of feeling like a bit of a sideshow.

What I can’t help but take from the war against the dead being wrapped up quite so soon, is the idea that the Night King simply hasn’t tested as well as a villain as Cersei has. Given as he’s a taciturn, unspeaking creation of blue prosthetics, I can understand why – but still, poor old Lena Headley, eh? Is it really that much easier to hate her than the creatures the Hound describes, not inaccurately, as death itself?

– That first and last cavalry charge, the perfect visual metaphor of fighting against terrifying impersonal forces.
– The books have a great many characters wearing elaborate themed helmets (guess what the Hound’s is). This was largely ignored in the show, because the actors are meant to be acting rather than squawking out their lines from behind a metal faceplate. However, Jacob Anderson (Grey Worm) does a fine job here with his face almost entirely covered.
– While we’re on about performances, ditto Alfie Allen. He’s been stunning throughout, and his swansong is making it up with Bran before dying on his feet.
– Two dragons scrapping it out in midair. This, this is what we’ve been tuning in for.

– The catapults being in the silliest position possible without actually facing the wrong way and bombarding their own side.

Verdict
A good episode, but also the distinct underlying worry the show may have climaxed too soon.
8
Cultured Vultures is a pop culture website established in 2013 covering all things gaming, movies, and more. We eat your words.
All The News On The Biggest Games