Though filled with interesting ideas and mechanics, Outward is let down by poor combat, dated visuals, and performance issues. 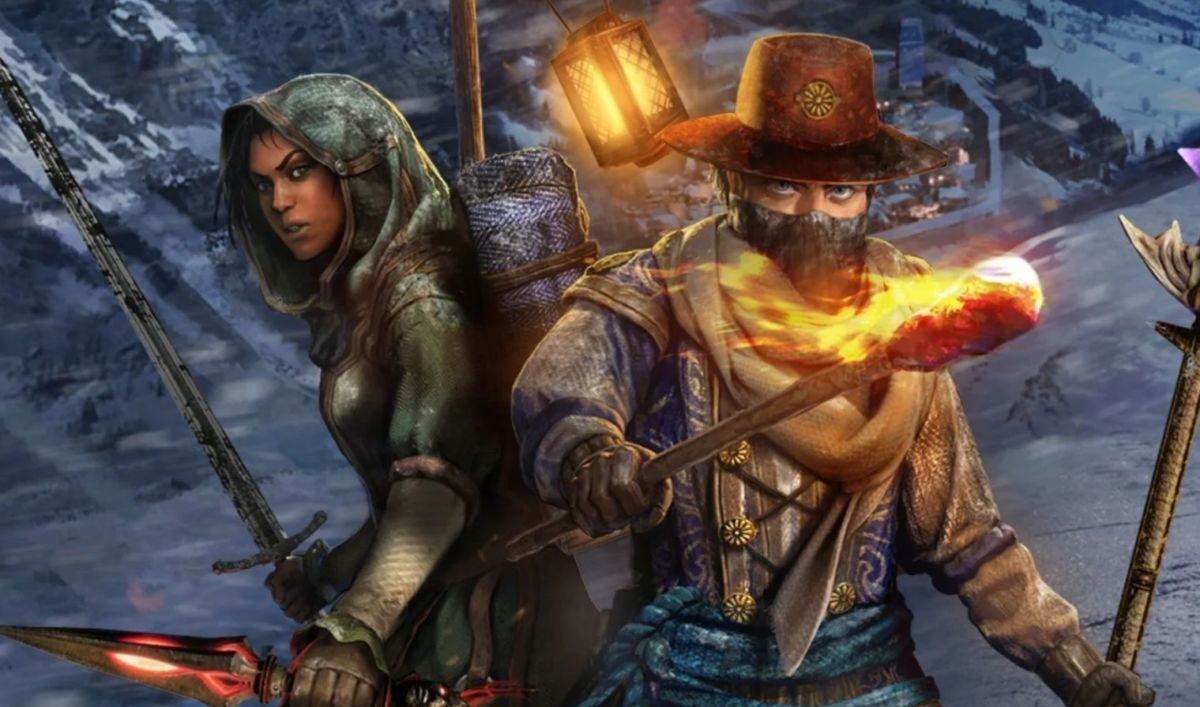 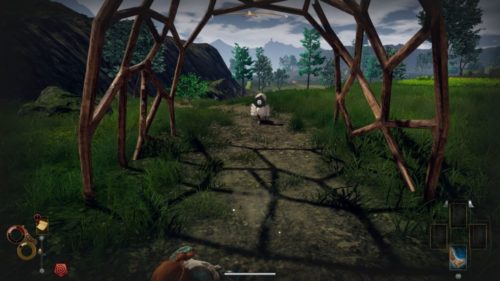 The opening moments of Outward give a good indicator of what you can expect. With little introduction, you are thrown into the world and set on your adventure. An accident at sea has had the unfortunate consequence of sinking a large sum of gold to the bottom of the ocean. It turns out that this cash was yours and was on its way over the water to pay for your home. Faced with angry villagers who were owed that money, you are given just five days to collect the necessary funds before you are thrown out into the wilderness and evicted from your house where you live.

Unlike traditional RPGs where you might expect the protagonist to be some heralded figure or long lost hero, the central character here is just a lowly villager. With no special abilities or powers, it is up to you to use whatever resources you can find to survive. The only tools given to help are a starting weapon, a flask to hold water, and a backpack. All three will prove to be important and the backpack in particular will set the basis for everything else you can acquire over the course of the game. 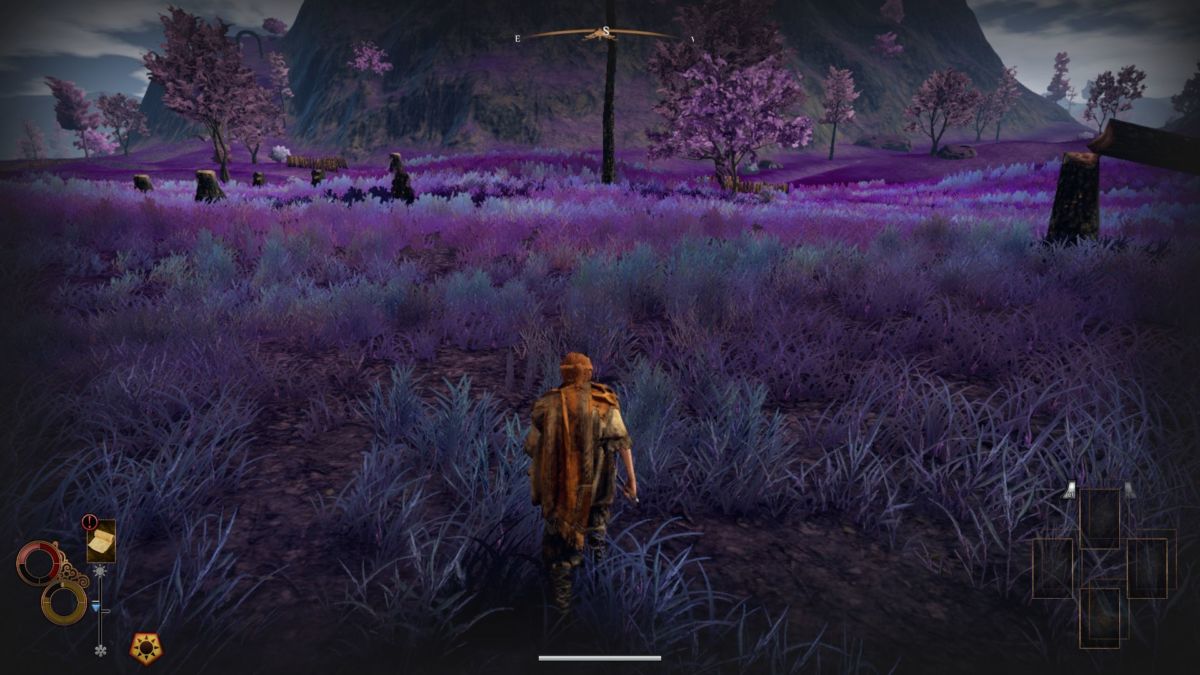 Earlier I used the word survive and essentially that is what Outward is all about. If you are one of those types who enjoys camping in the woods and being self sufficient in the great outdoors then this will likely be very much up your street. Those who don’t might not be prepared for just how hardcore the gameplay is compared to the likes of Fallout and The Witcher.

To put it bluntly, nothing is easy in this game. Things that you take for granted in other RPGs, like eating, take on a whole new difficulty. Not only do you have to scavenge food, but you also have to cook it just right before you can swallow it down to feel the positive effects. You’ll need to constantly keep an eye on your condition and ensure you have access to fresh drinking water and are free of any wounds, otherwise a nasty infection will take hold and make life even more miserable than it already is. Add to that the fact that there are no quest markers or fast travel options and it becomes obvious just how hard it is to do anything meaningful. A good portion of time will be spent just trying to survive. 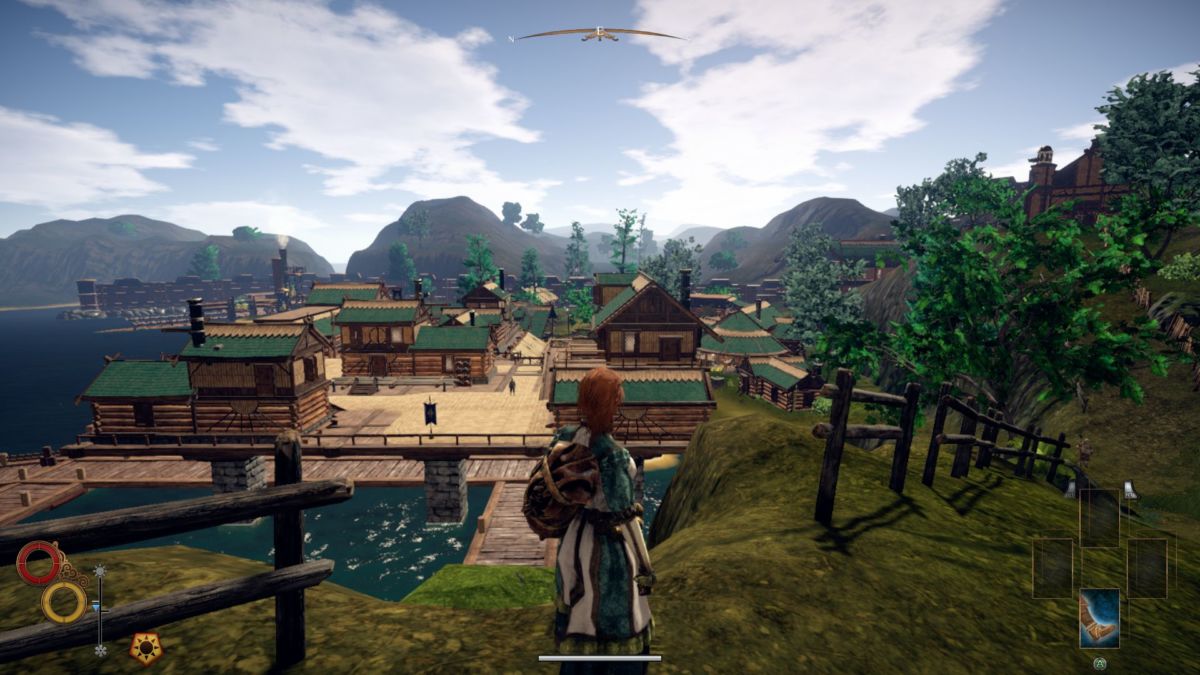 Part of the reason for this is that the developers were clearly trying to force the player to explore the world. The fact that you have to walk everywhere means that there are no shortcuts to bypass new areas. It is an interesting way to try to force exploration rather than simply rewarding players with better loot for heading away from the beaten path. It’s just a shame that much of the world feels very empty.

A few more NPCs to interact with wouldn’t have gone amiss, but this might well have messed with the core of the game. The main enemy is supposed to be the world itself rather than what is contained within it. Whether it is the freezing cold temperatures than threaten to turn you into a giant ice cube or the latest monster you encounter, everything plays into the theme of survival at any cost. A desolate world seems more in keeping with this idea than one populated with too many characters. Besides, there are plenty of caverns and dungeons to delve into, it is just you’ll not have many people watching you do so. 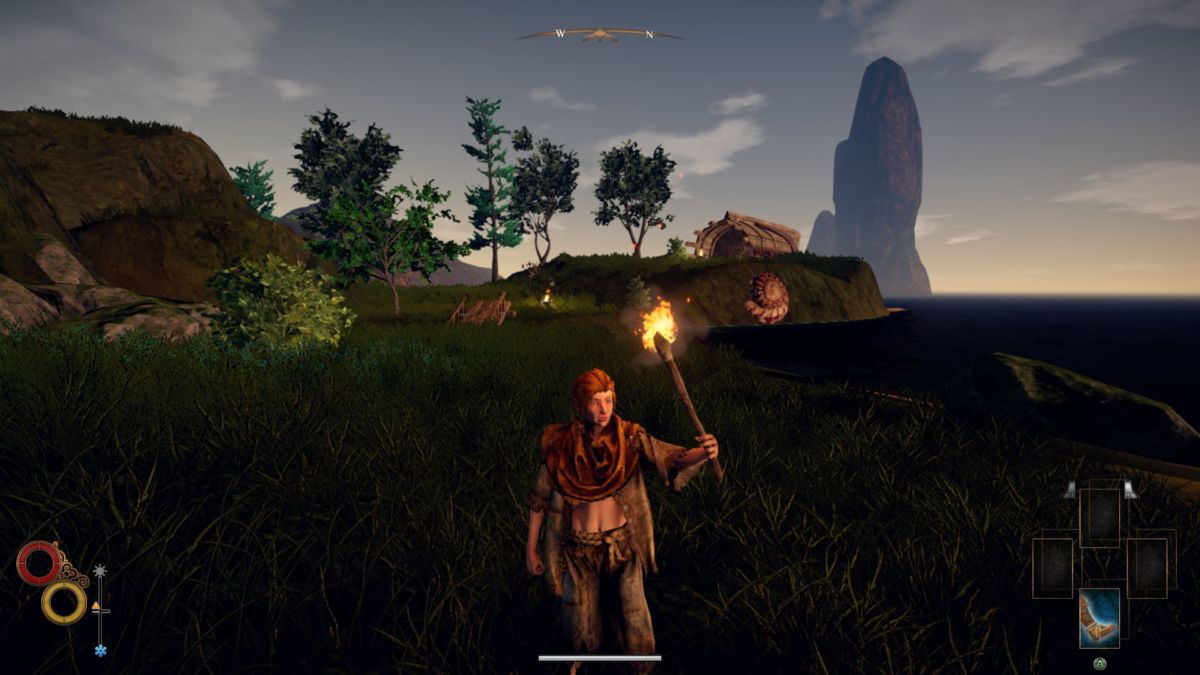 The lack of standard save points also plays into this theme. Getting defeated by an enemy doesn’t mean death and a quick restart to just before the fatal encounter. Instead, you face a variety of outcomes, all of them with the aim of trying to push you to come up with new strategies and learn from your mistakes. If bandits get the best of you in combat, they might strip you of all your possessions and leave you out in the middle of nowhere or hold you prisoner to random. It is left to the player to decide how to get over these hurdles and back to the task at hand.

As a mechanic, it certainly makes you invest more in the character and encourages experimentation with gameplay. Very few titles have really tried to do something similar and this is where Outward has its best moments. Without the ability to just try again decisions have far more weight. You actually have to put genuine thought into whether you tackle that enemy group or whether a particular path is worth the risk. Each time you fail you are given the chance to redeem yourself, even if only for a short time, and that feels far more gratifying than going back to an older save and having another go. 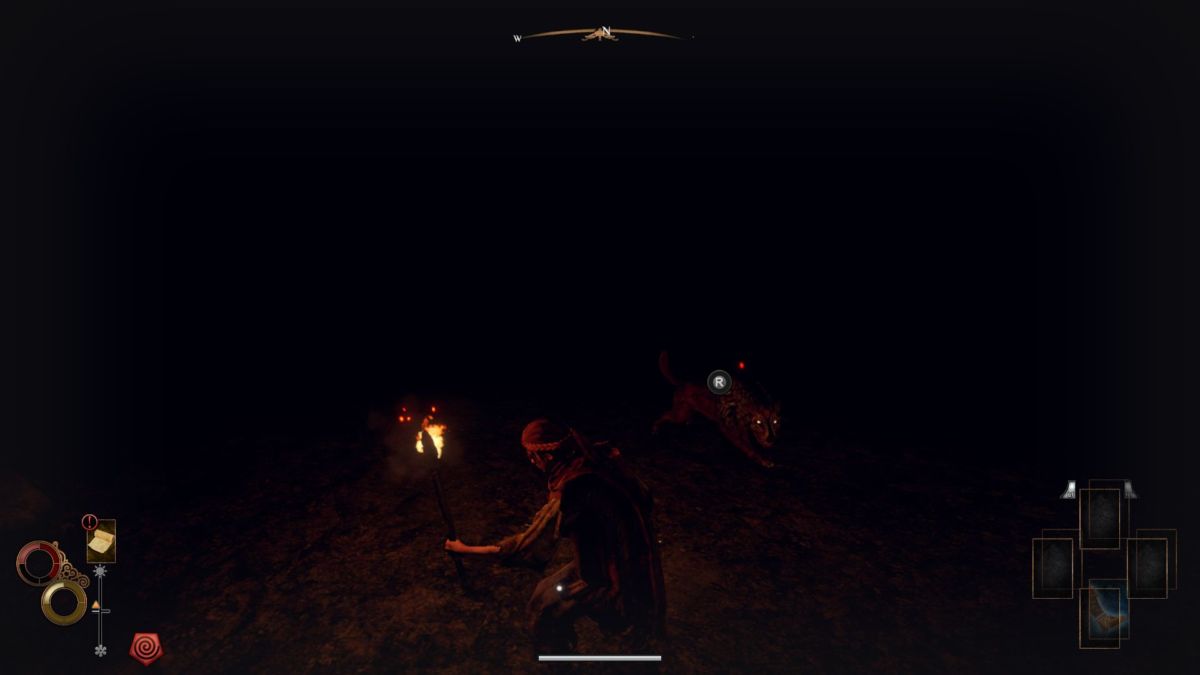 These instances are also something you will experience quite a lot because combat is just as unforgiving as the other elements of the game. In this case, though, it is not by design. While it takes very obvious inspiration from Dark Souls, it utterly fails to replicate the fluidity and feel of the swordplay from that series. Your stamina and the weight of what you are carrying has an effect on how fast you can move or attack, but it lacks the necessary feedback to allow you to master it properly. It just all seems very stiff, with battle encounters often devolving into circling opponents for what seems like an age. When you do defeat powerful enemies, you don’t feel much of a sense of accomplishment as the win will likely have come down to sheer luck.

Combined with the mediocre visuals and performance issues, it makes Outward feel like a dated experience. Character models are box-like and the environments render at a painfully slow rate. The load times are perhaps the worst offender, with the waiting often becoming unbearable. It all adds up to a game that wouldn’t seem out of place if it had released 10 years ago rather than in 2019. There are some notable exceptions in terms of design. The monsters have some pleasing designs and there is plenty of variety in terms of what you will encounter in different environments. The same is true for the soundscape, with each of the main locations having their own distinctive music. 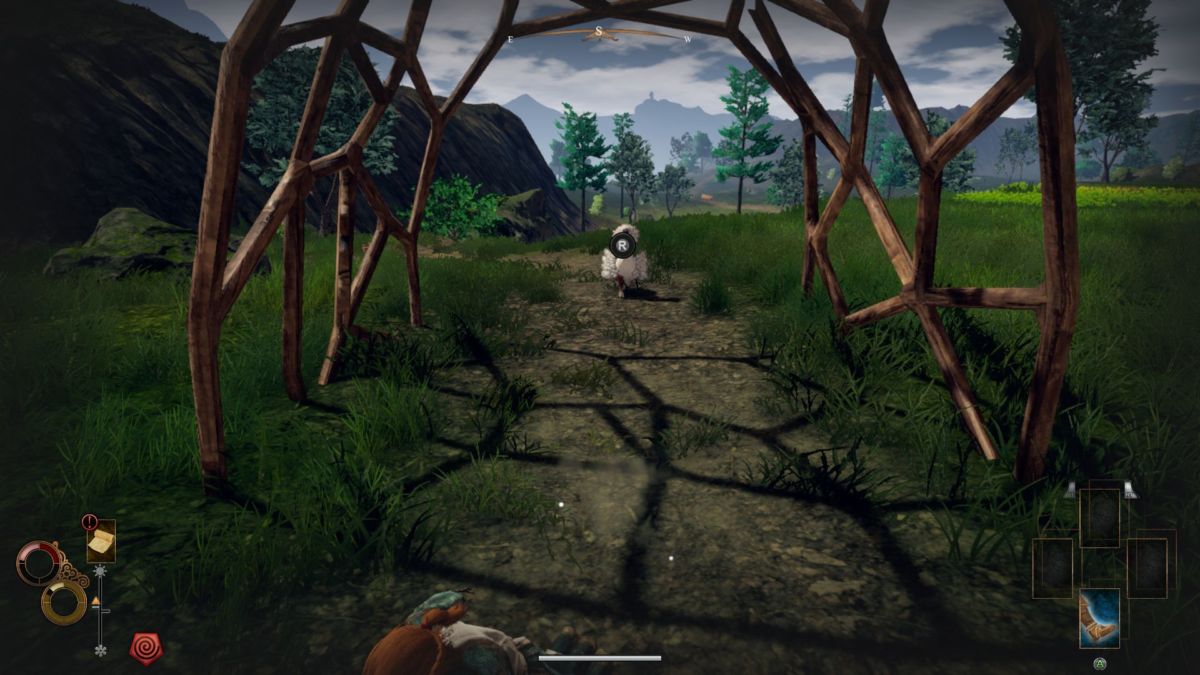 As I touched upon earlier, there isn’t much of a story to Outward. With no overarching narrative, you just play as a person trying to stay alive in this big old world. After some exploring you will come across three different factions. Each one has their own particular plot that you can take part in, although you might want to choose carefully. Once you align with one of these groups you are locked in for that playthrough and will have to restart with another character to go through the other quests. It is possible to get through each in around 20 hours if you want to do plenty of side quests and exploration at the same time. They intertwine with each other and there is some curious politics at play, though the narratives here all take something of a back seat, operating more as a framing device to prompt you into going to new places.

Perhaps the biggest positive that Outward does possess is the fact that it supports co-op multiplayer. You can adventure with a friend online or on the same hardware with split-screen. It’s a very nice addition, especially considering that RPGs like this are rarely made for more than one player, and works pretty well. The only downside is that the second player won’t get to save their progress, making them more like hired help to ease the difficulty rather than an equal companion.

Although it is hard to look past the shortcomings of Outward, there is something lurking beneath the problems that has the makings of a very special game. The permanence of your character and the way you are made to change the way you play after a defeat add something that other recent RPGs do not possess. You just have to be able to get past the issues to see it, which a lot of players may not have the time or inclination to do. Fans of the genre should definitely try it out, though, because the interesting mechanics definitely add something worth exploring even if the game can be occasionally frustrating.

Verdict
Though filled with interesting ideas and mechanics, Outward is let down by poor combat, dated visuals, and performance issues. Hardcore RPG fans are likely the only people who will want to delve into the nitty-gritty of this title.
6 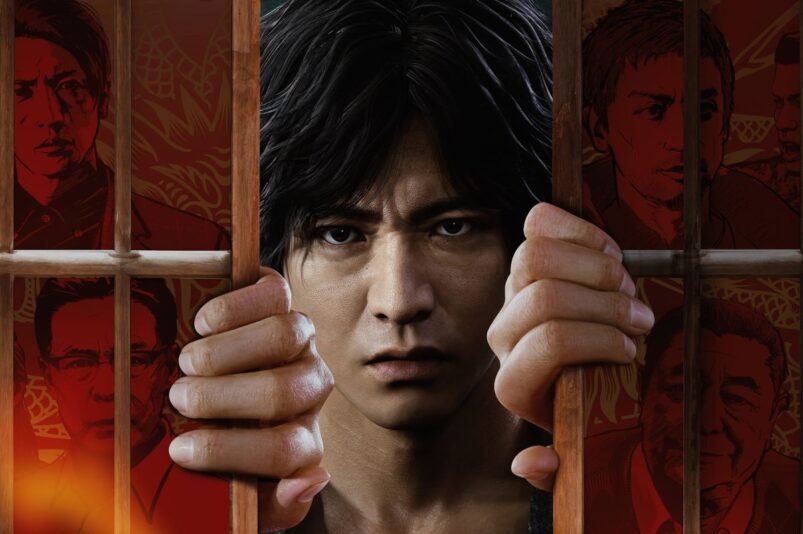