Halo Infinite Does Not Need A Battle Royale Mode

I don't want to hear the words "where are we droppin', Spartan?" 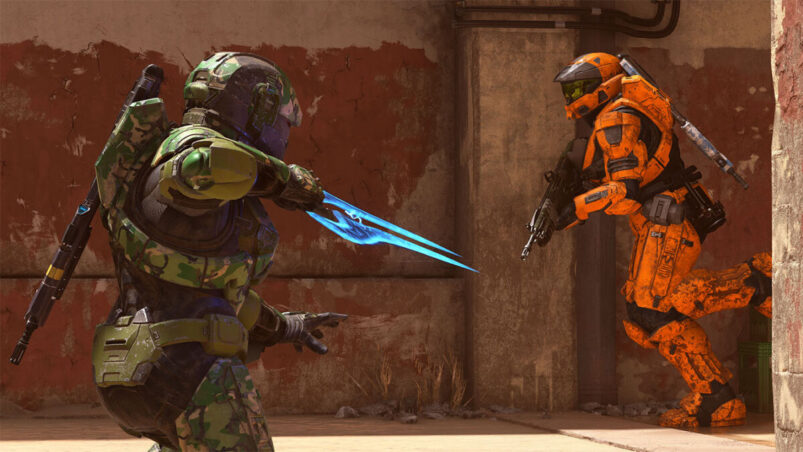 Ever since the announcement of Halo Infinite, it’s felt like discourse has surrounded whether or not the game’s multiplayer should support some kind of battle royale mode. To be fair, it feels like these days that any game that doesn’t come bundled with a battle royale of some kind will just lead to idiots on Twitter with football players or anime characters in their profile picture to proclaim “dead game” like they’re the arbiter of player metrics, but I digress.

Either way, Halo Infinite developers 343 Industries have spoken out in the past to say that there are no plans for a battle royale mode, while leaks for Halo Infinite have both confirmed and debunked the existence of a mode. We’re in Schrodinger’s Battle Royale, with 100 players who may or may not be hot-dropping into an adapted version of Halo 3’s Guardian map. We’re a month away from launch, and the answer seems to be just as unclear as it ever was.

While we don’t know if Halo Infinite will ever have a battle royale mode, the question remains about whether or not it should, and there’s enough reason to suggest that a Halo BR mode within Infinite would be excellent. The increased amount of movement options available in Infinite would make BR map traversal more fun than most games, and the core of Halo has always been about procuring weapons on the map and using them to dominate. Having those weapons be random spawns is another story entirely, but the point still stands.

However, I feel like Halo Infinite doesn’t really need a battle royale mode, for a number of reasons. Firstly, simply adding a battle royale mode just because all the cool kids are doing it doesn’t fit with Halo’s M.O. at all. This is a series that debuted with the brave subtitle of “Combat Evolved”, a self-imposed moniker that the original Halo more than lived up to.

Aside from the infamous Alien: Resurrection which also adopted the twin stick approach of first-person shooters, no FPS game by that point was offering campaigns or gameplay as a whole as strategic or as satisfying as Halo was. This is a trend that continued all the way through to Halo: Reach, before Bungie passed over the reins to 343 Industries. While Halo 4 and 5 were still good, they unfortunately didn’t hold a candle to older releases.

Combat Evolved has been a mantra that Halo has tried to live by during its entire inception, and it’s something that Halo Infinite is attempting to bring back. An open world approach to the campaign may not be the most novel thing in the world, but it’s an evolution of sorts for the overall franchise, while the approach to battle passes is an evolution for multiplayer gaming as a whole. What kind of evolution would adding a battle royale mode offer? From here, it would just look like hopping onto a trend way too late.

This is the other point as to why Halo Infinite should avoid battle royales: they seem to be losing their relevance. I’m not going as far as to suggest that Fortnite et al are dead games, because that’d be silly, but the actual battle royale formula, as it’s existed in game over the past few years, is no longer the gold star feature it once was. Fortnite themselves have acknowledged as much, adding features like Creative Mode, Party Royale and new modes like Imposters, a shameless cash-in on Among Us and the new, hot trend of social deduction games.

Seriously, if 343 Industries wanted to add a battle royale mode in some kind of attempt to chase clout, they’d be better served adding some kind of social deduction mode and calling it a day, because it feels like they’re more relevant than BR modes at the moment. Adding a battle royale to Halo Infinite seems pointless right now, especially when you could wait a few months for 343 to release Forge mode and have the community just make the mode anyway.

Again, I don’t want this to sound disparaging to the “idea” of a Halo battle royale in general. There’s potential there for it to be one of the better games on the market, but I just don’t think it should be anywhere near Halo Infinite. I don’t want to have the game’s population split between this one mode and the rest of the game, leaving some of the more experimental or weirder modes like Oddball, Infection or Grifball to be killed off because you can only find games playing TDM or BR. Make it a standalone game at least, have battle pass progression cross over too if you want, but keep it separate from the main Halo Infinite MP experience.

Regardless of this though, if 343 Industries reckon a BR mode would either be a) interesting, or b) would make the game more money, it’s likely they’d do it regardless. Not only do I not think Halo Infinite’s needs a battle royale mode, I personally just don’t want to see it. Halo, for me, remains the last vestige of multiplayer shooters who haven’t cashed in to ride the battle royale train, and I want to hope it’s because the series doesn’t want or need to chase trends. I don’t want to face the reality that it’s because there hasn’t been a new Halo game in years.