Halo Should’ve Made The Change To Open World Sooner

Bold statement about a game that isn't even out, but I stand by it. 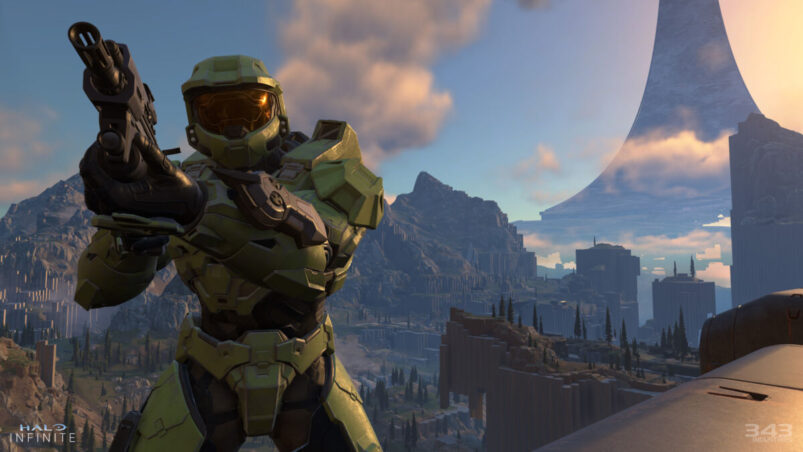 It’s fair to say that Halo Infinite has had somewhat of a tumultuous development. Scheduled to launch around Christmas 2020, the game was delayed due to a lacklustre gameplay preview. Infinite’s slowly been building up steam again with the wave of multiplayer technical tests, but after watching the campaign preview earlier this week, I have a lot of confidence in what I’m about to say: Halo should have made the switch to open world sooner.

The short gameplay presentation gave us a few minutes of Master Chief taking on the overwhelming odds of The Banished. Stranded upon the Zeta Halo ring with a few remnants of the UNSC, the Chief will have to work together with a new AI partner known as The Weapon to mount a guerrilla campaign against The Banished. Surrounded on all sides, the Chief’s got his work cut out for him.

Instead of playing out that narrative through a series of normal levels, like Halo has done for the past seven mainline games, Halo Infinite is adopting an open world formula, with players able to go wherever they want, discover bases, checkpoints, enemy outposts and collectibles at their own pace. I’m hoping we’ll still be able to find skulls in some weird and obscure places, but that’s besides the point. The fact is, this is a brand new way to play Halo and it’s been a long time coming.

There’s perhaps some irony to this sentiment, or at least I think there is. Earlier this month, Ubisoft released Far Cry 6, which was met with a lot of criticism over the fact that the open world formula of the game hasn’t really changed since Far Cry 3. Now, Halo Infinite is boldly showing off a gameplay style that closely resembles that of Far Cry, but it instead feels like somewhat of a revelation.

So, why is that? Simple: Halo has always been naturally suited towards open-ended chaos. Some of the best Halo highlights stem from massive battles or skirmishes, along with situations where players try to go about their mission in a way that perhaps the devs have foreseen. Why bother trying to shoot everything inside a building when you can try to ram a Ghost through the door and splatter everyone? Despite being a mostly linear shooter in its campaign with occasional open moments (Halo 3: ODST’s New Mombasa, the hub between the individual levels, springs to mind), Halo Infinite is the series’ first dive into a fully open world, and that’s exciting.

Unlike some single-player shooters on the market, Halo’s campaigns are chock full of moments powered by emergent gameplay. Instead of just clearing rooms by shooting everyone until they fall over, each fight is a chance for the physics, enemy AI or player creativity to coalesce into something undeniably fun. Sticking a plasma grenade to a brute is fun, but it’s more fun to watch his grunt subordinate accidentally throw it at the back of his head. Chucking that formula into a massive sandbox should only increase the amount of shenanigans players can get up to.

It feels like Infinite has the potential to be an unshackled version of Bungie’s original vision for the game, with larger scale combat and bonkers gameplay at the forefront. Sure, the game’s still a few weeks away, and there’s every possibility that the final version doesn’t live up to this lofty ideal, but going off the curated sections of campaign footage we’ve seen, Infinite looks more exciting than any Halo game has since Bungie still held the reins.

343 Industries even seem to recognise the potential that Infinite’s sandbox wields by giving the player more tools and abilities to interact with the environment and enemies you encounter. These can also be upgraded to further enhance the carnage you can create. Being able to lob fusion coils at grunts is one thing, but that grapple hook alone seems like it’s going to make or break the entire game. Just the clip of Chief bailing out of a Banshee, shooting down a second with a rocket launcher before grappling to the third to hijack it has made me want Halo Infinite more than any CGI trailer ever could.

The one drawback to all this is the fact that 343 have confirmed that Halo Infinite won’t launch with campaign co-op, which has typically been a franchise staple for all other releases. The lack of campaign co-op does sting, especially considering that emergent gameplay is only amplified by the inclusion of 3 other doofuses playing the game in their own way, but with it being promised during the second season at least, it’ll just give me another reason to play the campaign again when co-op drops.

The closer we get to Halo Infinite’s launch, the more exciting the game becomes, and that’s without talking about the multiplayer that’s providing its own spin on live service and battle passes that seem less consumer unfriendly. All in all, it seems like a good time to be a Halo fan. Let’s just hope this hype continues when the campaign actually drops.