"If you build it, it'd be cool." - You, playing Grand Tactician. 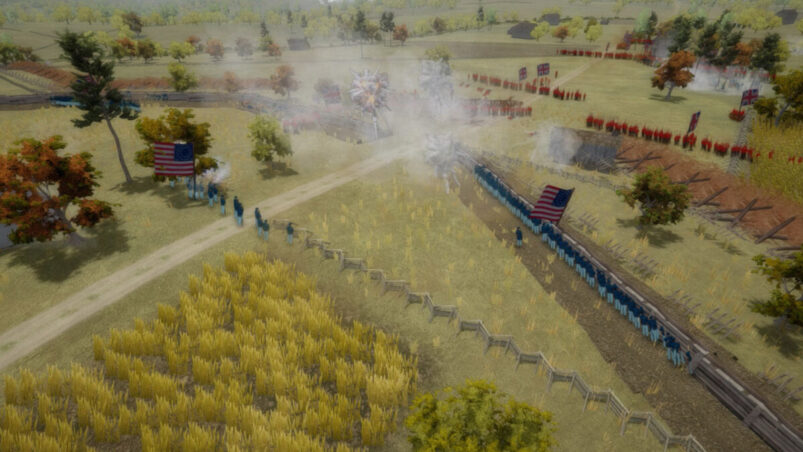 Unlike many grand strategy games, construction and infrastructure development in Grand Tactician: The Civil War (1861-65) is done through hands-off systems and incentives through policies and subsidies (see our policy guide). However, the player’s armies can construct a number of vital buildings that can make or break their overall war effort. To help players get acquainted with the engineering value of their army, here is a helpful guide to get you started.

Here are the three main constructibles in Grand Tactician:

And here’s everything you need to know about construction in Grand Tactician.

For an army to start building a constructible, select an army, hover over the construction tab, and then select the desired building. Then, hover the mouse over the strategic map within the army’s small engagement circle and find a location where the building icon will no longer glow red.

The army needs to stay next to the project until it’s finished for construction to progress, but players can move the original army away and bring any other army in range of the project to continue work. An army that has a leader and brigades with the engineering perk will increase the speed of construction, so it may be a good idea to have a dedicated engineer army moving around the map, building vital structures.

Going for maximum realism and immersion, the developers of Grand Tactician included an Orders Delay mechanic (can be toggled in the options menu), which simulates the time needed to deliver an order to an army in the field. By the Civil War the telegraph became a widely-used communication technology, which aided in the transmission of orders to army headquarters.

Telegraph stations in Grand Tactician greatly reduce the order delay when players send out their orders to their generals, making them valuable hubs for armies to camp around. As armies move deeper into enemy territory and infrastructure inevitably gets damaged, armies can be ordered to construct new telegraph stations, which will extend the player’s communication network and improve their army’s response time.

Arguably the most important structure, the supply depot acts as a logistics hub that sends supplies, ammunition, and provisions to nearby armies. The way it works is that the player’s economic production gets converted into resources that are automatically sent to a depot or another supply point, like a railroad bridge, and the depot then sends supplies where needed.

The larger an army is out in the field, the more supplies it will need. Depots, when constructed, start at level one and can be upgraded up to level three, which allow them to hold and send out more supplies at a time.

Upgrading a depot doesn’t require an army nearby as the depot’s own personnel expand the depot. It does take time for depots to be upgraded, so it’s important to keep them secure while the work is finished.

The final available constructible is the fort, a modest wood and earth base with a small garrison and some artillery. They are designed to act as roadblocks in areas where your own armies might not be able to operate in, such as a less important road or remote bridges and ferries that lead to vital cities and industries.

Unlike depots, forts can’t be upgraded and they take a long time to build. However, the long-term effect of putting down a well-placed fort can mean buying yourself a few extra days, weeks, or even months for the enemy to besiege and take the fort.

Though it’s possible to fully employ troops solely for manoeuvring and combat, the aforementioned structures can be either critical to the war effort or act as a force multiplier of sorts. Players would be wise to not underestimate the need for depots in particular, as they plan their way to victory in the US Civil War.