Ten huts and so on. 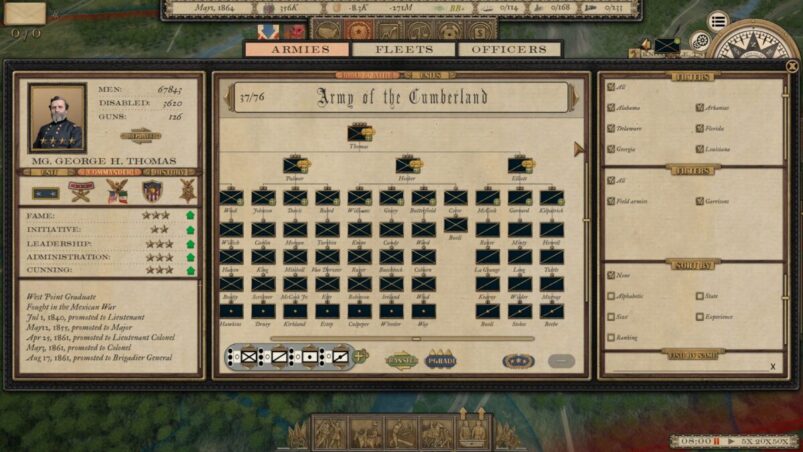 Grand Tactician: The Civil War (1861-65) sees players taking on the monumental task of leading an entire war effort as either the USA or the CSA to win the US Civil War. Players will spend most of their time either preparing and organizing their troops for battle or engaging in massive engagements. Army organization can get complicated and confusing, so here’s a primer to get aspiring generals started.

Here are the four main levels of organization in Grand Tactician:

At the outset of the Civil War the US and Confederate militaries hadn’t yet adopted the Napoleonic Corps system for their armies and, as a result, players will only have access to the lower three levels of organization. Once players enact the Military II policy (see our policy guide) their country will reform the military and unlock full organizational freedom.

Naval fleets operate independently and don’t have a complicated organizational system like the army.

And here’s everything you need to know about army organization in Grand Tactician.

The army is the highest level of organization for both the USA and CSA. Essentially, the army is a grouping of multiple corps that are meant to operate in coordination with each other in a selected theater.

The army HQ will have little tactical effect in battle, but a good leader with high fame (see our leader guide) and administration will improve national morale and processing of supplies. The Union Army of the Potomac and the Confederate Army of Northern Virginia are historical examples of such formations.

Corps are the main strategic maneuver units of the Civil War. They are basically self-contained mini-armies capable of fighting small battles by themselves and are composed of multiple specialist divisions.

Though specialization is mostly left to the combat divisions, corps can benefit from a general focus on infantry, cavalry or even artillery. The most common historical corps types of the Civil War were either standard infantry heavy corps or cavalry corps.

The division is a tactical specialist grouping of multiple brigades. Divisions work best when operating with other divisions from the same corps on the battlefield and are capable of pursuing limited tactical objectives.

This level of organization is where players will see the most specialization and variety as they can compose all sorts of formations for different tactical roles. Though divisions generally benefit from a measure of specialization, historically many divisions would have one primary type of brigade to make up the bulk, like infantry or cavalry, and a small additional force of another troop type for flexible support, like artillery (see our troop type guide).

The brigade is the main tactical combat unit in Grand Tactician. Some brigades can detach skirmishers, but ultimately brigades are the lowest level of organization and will act as the player’s practical fighting force.

Due to the size of armies in the Civil War, any one brigade is unlikely to make a significant impact on any given tactical situation. It’s always a good idea to use brigades together in a coordinated manner to maintain good morale and overwhelm local enemy resistance.

Army organization is one of those mini-games that players can easily sink hours into trying to come up with a force that best suits their needs and responds most effectively to threats. Now that players have an understanding of the four main levels of organization, they can let loose and create the army of their dreams.