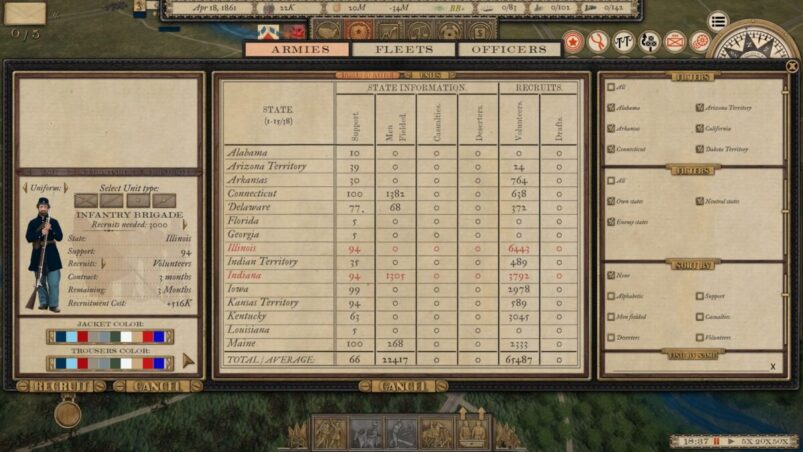 Armies of the American Civil War were composed of a variety of troop types to tackle different strategic and tactical situations. The prevailing doctrine of combined arms warfare was thought to be the optimal way of applying military resources for victory. To help players get an understanding of the available troop options, we composed a handy survey of all the major unit types in Grand Tactician: The Civil War (1861-65).

Here are the four main troop types in Grand Tactician:

And here’s everything you need to know about troops in Grand Tactician.

During the Civil War, infantry was the bread-and-butter of any army, doing all the fighting and most of the dying. It is the most common troop type and will provide an army the most amount of resilience and staying power, as well as a decent level of firepower, depending on the type of weapon they carry.

Aside from standing, marching, firing, bayonetting, and generally obeying orders, infantry brigades can detach skirmishers, small squads of sharpshooters and scouts, that can perform various reconnaissance, harassment, and screening tasks. Infantry can also build fortifications during battle that can range from hastily put together breastworks to sturdy trenches and parapets.

Infantry is generally the most flexible troop type on the battlefield, but brigades of infantry are generally quite slow and will take up most of the player’s manpower to have fully effective fighting units.

Contrary to the earlier Napoleonic and Crimean Wars where cavalry played a vital tactical role, involving impressive charges, by the US Civil War artillery and small arms, rifled weaponry became so deadly that cavalry shock tactics became costly. As such, one effective way of treating cavalry is as mounted infantry skirmishers meant for harassment and scouting.

Cavalry’s greatest strength is its mobility and speed, allowing brigades of horsemen to quickly reposition or exploit a weakness in the enemy formation. This also translates to the strategic map where dedicated corps of cavalry can move ahead of their infantry corps, gather intelligence, and even skirmish with larger formations of infantry if given plenty of good terrain to work with.

Cavalry can still engage in thunderous charges harkening back to ye olde tactics, which can be particularly effective against a crumbling or fleeing opponent, but this requires extreme precision and careful timing for maximum effect and minimal casualties.

The quintessential support unit and the weapon of the future, artillery is a critical troop type for any successful army. It gives divisions and corps great tactical flexibility in being able to hit enemy forces from afar with pinning bombardments or support a defence with deadly blasts of canisters.

Artillery comes in two forms: foot and horse. Foot artillery will make up the vast majority of the player’s support arm with the heaviest guns being found here, whereas horse artillery will be a specialist unit meant for rapid movements and surprise repositioning to hit a vulnerable enemy formation.

The Civil War was a big transition period for navies with the development of ironclad warships and the prevalence of steam-powered engines. In Grand Tactician there are a ton of warships of varying sizes, but players should primarily be aware of the two main operational areas of ships: river and sea.

River ships can only operate on large rivers, which can be useful on the especially large Mississippi river to blockade ports or support army movements. Seagoing ships need to stick to the open Atlantic Ocean and are great for blockading important trade ports or even escorting landing operations.

There are some ships that can go up rivers and also into the open ocean, but these ships are usually small or medium generalist ships that are meant to augment already established specialist fleets.

Despite not having a huge variety of troop types, those present in Grand Tactician are so well-defined and so critical to effectively winning the war that there are virtually limitless combinations and tactics to try. Now that players have an understanding of the general features of each troop type, the challenge is to find the right combination that fits into an effective military strategy.