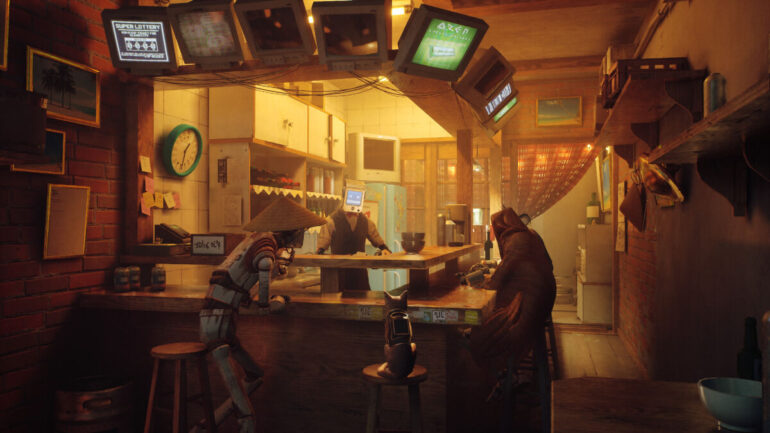 You know how cats have the most awesome lives ever? Think about it. They mull around the entire day, are treated like royalty, and sleep half the day away. Well, unless you’re the titular stray of BlueTwelve Studio’s cyberpunk cat adventure.

Stray puts players in the paws of a cat that meandered a little too far and found itself having to escape from a world of robots. While we could probably come up with a dozen reasons why the concept shouldn’t work as a game, it has absolutely enamored players. Including us. But what do you when you’ve completed the five-hour cat crusade? Why not sink your time into one of these 10 games like Stray?

They may not all let you meow and knock stuff off counters, but we can promise there’ll be animals. And some of them will be cute. Here are some of the games like Stray you should check out across PC, PS4, PS5, Xbox One, Xbox Series X & S, and Switch.

Some games just leave you wide-eyed and speechless, but not because they’re overly terrible or astonishingly good. It’s because they may seem like an innocent tale of a dog rescuing his crush, but really there’s some underlying horrors unraveling that would make Cruella de Vil blush. We won’t spoil anything about A Dog’s Life’s story, except that it’s far more bonkers than we expected. However, we will say, if you enjoyed Stray, you should get a kick out of kickin’ it like a pupper in Dog’s Life.

Dogs are often stereotyped as being a bit dopier than cats, and it shows in A Dog’s Life. For instance, Stray’s cat gets to duke it out with squirmy mutants with the help of an AI companion. Dog’s Life’s American Foxhound, Jake, gets to play urination minigames and think of quips while “collecting” scents.

Don’t get us wrong, Dog’s Life is a lot of fun for what it is, especially if you like to test your skills in various minigames.

Tokyo Jungle answers the question, “What happens if you transfer Solid Snake’s consciousness into a deer fawn?” In this very unique stealth adventure, players take control of a variety of different beasts, ranging from tiny Pomeranians to a Dilophosaurus, to fight for supremacy in a world without humans. After mankind became extinct, space opened up for a new dominant species, and everything from passive herbivores to ravenous carnivores has been vying to fill it.

Tokyo Jungle is an insane concept that boggles the mind, but you’re going to have fun with it. Unless the idea of fighting other animals and turning them into food upsets you, then you’re going to hate it. To survive in this animal-run world, you’ll need to master stealth mechanics, like hiding in a cardboard box – and no, we’re not kidding – and chow down on your fellow four-legged friends.

The game is strange, but you can’t hold that against it when that strangeness winds up being mostly entertaining.

We thought Stray would be the coolest cat-themed game for quite a long time. Then we remembered three years ago, Devolver Digital released Gato Roboto, a fast-paced Metroidvania that’s literally about a cat in a mech suit.

This stylistic and chaotic romp sends a battle-hardened kitten into a frantic firefight against animal-controlled robots and all manner of mechanical oddities. The old-school black-and-white color scheme can make it difficult to follow the action onscreen, but also serves to appeal to players that love the nostalgia of classic side-scrollers.

It parallels Stray in that both games feature cats and robots, but they couldn’t be any more different when it comes to gameplay. Still, if you love felines, you’re going to want to get lost in the antics of crafty little Gato Roboto.

Picture Dragon Quest, but remove everything and replace it all with feline characters and cat references. That’s ultimately Cat Quest. The Gentlebros did actually look to Dragon Quest for inspiration for this attractive dungeon crawler, and the team didn’t skimp when it came to cat-ifying the fantastical land of Felingard.

Beneath the overlay of cat fanaticism is a clever RPG with character progression and quite a bit of exploration across a detailed open world. Even the real-time combat is engaging enough to keep all the cutesy kitten talk from dulling down the experience.

Cat Quest is full of meows and purrs, but it is really a fully fleshed-out RPG underneath all the cat puns. The top-down perspective allowed The Gentlebros to experiment with a unique art style, and the result is something vibrant, flashy, and surprisingly full of content.

Take control of a custom-made anthropomorphic warrior and fight your way through a branching narrative revolving around the fabled “Tree of Life.” There’s quite a bit of customization in Biomutant which starts with a sizable character creation and ends with a robust crafting system that produces some of the game’s best weapons.

You’ll use these melee and ranged weapons to fight through mobs of baddies. Occasionally, you’ll set aside your weapons to complete a puzzle impeding your progress. It’s going to feel very familiar as many of Biomutant’s mechanics are borrowed from other open-world RPGs. What Biomutant does have over similar titles is its art style, which is quite unique, as well as Stray’s focus on an animal protagonist.

Experiment 101 put forth a valiant effort for its first release, and though Biomutant could be better, it could also be so much worse.

If you told us ENCODYA served as some inspiration for Stray, we wouldn’t be surprised. Both games feature a relatively hapless protagonist that needs the assistance of artificial intelligence to progress forward. Instead of a cat, in ENCODYA , you control nine-year-old Tina, who’s accompanied by her guardian SAM-53.

Tina and SAM-53’s adventure starts when the young girl receives a mission from her long-since-dead father. A grayness threatens the sanctity of the world, and only Tina has the means to put a stop to it. To accomplish her mission, she’ll traverse the cyberpunk world of Neo Berlin 2062 in this visually delightful point-and-click experience.

A lot of heart clearly went into the development of ENCODYA, resulting in a delightful adventure for a girl and her robot.

One of the worst things about animals playing a significant role in a game is that you spend most of the experience just waiting for something awful to happen to your four-legged companion. Never Alone sets up that fear right in the title, as if Upper One Games wanted to challenge fate by making such a bold declaration.

Nuna and Fox may not look like much, but they’re on a mission to save their people. A terrible blizzard has been relentless, and the unlikely heroes must set out to determine what’s causing it. Nuna is accompanied by her arctic fox, which can be AI or player-controlled. The two will have to work together to survive the fierce cold and evade other roadblocks.

Never Alone blends puzzles and platforms similar to games like Little Nightmares, keeping you on your toes with each conundrum Nuna can’t solve without your help.

Okami is a lot of things, but chief among them all is “beautiful.” A striking Japanese ink wash art style comes to life in this action-adventure. Players control Amaterasu, the goddess of the Sun. She’s in wolf form for this excursion, which has her going up against the eight-headed demon, Orochi.

If you haven’t guessed already, the game is steeped in Japanese folklore, and its artistic flair helps to bring many fables to life. Amaterasu sets out to complete quests as the magical Celestial Brush steps in to help the white wolf with combat. Different brush strokes do different things, putting Amaratsu on the offensive against waves of demons.

Okami is a classic linear adventure that brings a unique concept to the forefront and utilizes it very well, being a solid pick for those who want more games like Stray. The Celestial Brush and character progression allow multiple ways to play and succeed in bringing down the eight-headed fiend once and for all.

9. Night In the Woods

Night in the Woods was nominated for more than 20 awards across multiple gaming ceremonies, and there’s a very good reason for it. The game is near stellar, creating an experience that’s primarily focused on character development and story-based exploration. Though there’s plenty to do in Night in the Woods, expect to get lost in the characters and world as you slowly creep toward uncovering who, exactly, is in the woods.

You’re not going to be immersed in frantic combat or solving puzzles galore in Night in the Woods. Instead, you’ll go exploring, chat it up with the local residents, and get lost in the delightful world that Infinite Fall crafted.

Night in the Woods isn’t for everyone, but players that enjoy narrative-driven adventures and a well-crafted script will fall in love pretty quickly. If anything, it’s definitely a nice break from nonstop action and fast-paced gameplay.

Animals as detectives is a pretty common thing, so you probably won’t blink when you find that private eye Howard Lotor is a raccoon trying to unravel a mystery fit for a noir-style game. EggNut made sure that Backbone takes itself a little seriously, despite the world of anthropomorphs.

In Backbone, you’ll guide Lotor through a rich and diverse city, chatting it up with the local denizens. The more you engage in dialogue, the more you wind up learning more about Lotor. There is a very distinct theme of pain and loss tucked away, and Backbone does touch on many deep themes, making this a surprisingly mature quest to make a difference.

The best part of Backbone is absolutely its pool of characters, who help Lotor define himself and give life to the dystopian version of Vancouver. If you’re looking for more animal detective games like Stray, give Backbone a try.

READ NEXT: 10 Games Like Clash of Clans You Should Check Out