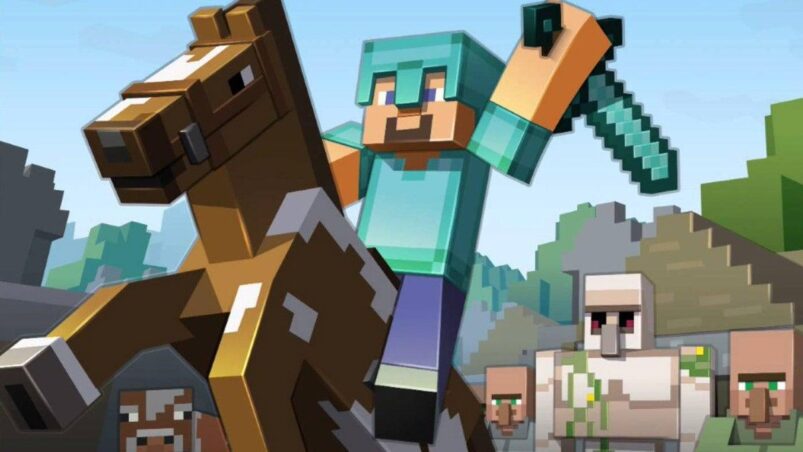 Minecraft is absolutely the game that will never die. But that doesn’t mean you can’t get a little tired of it here and there. Where do you turn when you’ve built every creation you can fathom, have won countless rounds of Hunger Games, and have bested the Ender Dragon more times than you can count? Having been in that position, that’s why we’re compiling this list of games like Minecraft. They may not have the gentle whimsy of the timeless classic, but these ten titles satisfy some itch within you that Minecraft used to scratch.

The world is your playground in this open world survival game. Unfortunately, that playground is full of bullies that want everything that you have. One way to counter your persistent opposition is to build a base to house all your goodies. Rust is all about survival, and, if you wish it to be, construction. Not unlike Minecraft’s Survival Mode, the more secure the structure you build, the more likely you are to see the sunrise.

Of course, Rust is a bit more adult than Minecraft, but it does share some similar mechanics as the blocky builder. For example, you can route electricity throughout your shack to power pressure pads. Rust’s system is a bit more elaborate, and you can use it to power machine gun turrets. Which are infinitely cooler than wooden rollercoasters.

Minecraft is a game of whimsy, exploration, and construction. Astroneer is very similar in some of its themes, though you do get to explore the deepest reaches of space. In this sandbox adventure, you’ll navigate alien planets, gather resources, and develop a custom base to survive in the vastness of space. You may not battle against skeletons and Creepers, but there are enough hazards and dangerous plant life that make survival somewhat difficult.

The 3D world of Astroneer is a little prettier and more dynamic than Minecraft, but the two games do share similar mechanics when it comes to building and powering your abode. Astroneer just has a bit more to offer in the way of different buildings and machinery that can be constructed.

When we think of games like Minecraft, it’s easy to get caught in the trap of only considering games that feature building. That’s only a portion of what the blocky world has to offer and paralleling Deep Rock Galactic to Steve’s adventure really highlights this. In Deep Rock Galactic, players take control of one of several character classes and set out into the depths of an alien planet. So, how is this anything like Minecraft? It’s all about the interactive environment.

Much like in Minecraft, Deep Rock Galactic has players mining for resources and breaking down the world around them. Each procedurally generated cave is an expansive environment with plenty to explore and destroy. Minecraft players may feel at home navigating the underground and farming resources, but then a touch of Left 4 Dead-like combat sneaks its way in to keep you on your toes.

Minecraft can be a rather simple game or one that tests the limits of your patience. Making it from one day to the next in Survival Mode isn’t easy, and that difficulty is reminiscent of another survival game – Don’t Starve. In Don’t Starve, players move through a strange hellscape evading monsters, gathering resources, and building a basecamp to survive from one day to the next. Sound familiar?

Though the art styles may differ completely, there are some similarities between Don’t Starve and Minecraft. The former may be more of a horror-themed experience looking to unsettle players with its unusual world full of creepy monsters, but the core mechanics of the two titles are close. Of course, you won’t be breaking bricks and digging through underground caves in Don’t Starve, but you will be farming for resources to keep you well-fed and strong enough to survive the elements.

The elements in Don’t Starve’s case being whatever ghastly beast you wander too close to.

Take the concept behind Minecraft and thrust it into the Dragon Quest universe, and you pretty much have Dragon Quest Builders 2. There are some striking similarities between the two games, largely the blocky aesthetic that makes up both worlds. Granted, that’s far from a bad thing. Players that love Dragon Quest can marry two wonderful universes into one vibrant and playful experience.

Dragon Quest Builders 2 does enhance the experience a bit with RPG elements, elaborate traversal methods, and a more eclectic assortment of enemies. However, it’s that core mechanic of building that’s sure to be reminiscent of Minecraft. If it’s a more elaborate building experience you’re looking for, Builders 2 should be able to provide it with deeper gameplay and roleplaying all intermingled with the fun of Minecraft.

You may be questioning how a game about building and a battle royale game have anything in common. Well, let’s not forget Fortnite’s roots. Before it became the poster child for battle royale gaming, Fortnite featured a mode called “Save the World,” which frequently charged players with protecting something of note. To succeed, you need to build a base strong enough to withstand waves upon waves of incoming enemies.

Farming resources and construction are a bit different between the two, with Fortnite focusing more on building a defensive base than anything fun and decorative. However, the building mechanic is surprisingly deep, so you can have some fun with the overall aesthetic of your base.

In this intergalactic survival game, players are sent off into the deepest reaches of space where hazards galore await. When the ship malfunctions, all they can do is step onto an alien world and do everything they can to survive. And that means building a suitable space to live and take shelter in. While Starbound is laid out completely different from Minecraft, the latter’s survival mode is not too unlike surviving in Starbound in that an expansive, fortified structure is the best way to survive from one day to the next.

Starbound’s 2D plane offers plenty of exploration and resource gathering, which culminate in building towering structures worth calling home until you can find a way off the extraterrestrial rock. With a few minor tweaks, Starbound could wind up being Minecraft in a 2D space. There’s a lot to see and do in Starbound, from investigating anomalies to running from the newest big baddie to hone in on your scent. This is a well-rounded experience sure to give you Minecraft vibes as you develop your getaway.

Take the gameplay of Starworld and remove the premise. Now, you have Terraria. The bulk of your time in Terraria will be spent thwarting a variety of bad guys, but amidst the open-world survival is a game of creation. Build yourself a home base to be proud of with the selection of resources available in this quirky adventure.

You can emphasize building in Terraria, and put more effort into it than others may. Why stop at one home when you can build an entire village? Games like Minecraft don’t always have to be so heavily focused on the build mechanics, as Terraria shows. It’s similar to Minecraft’s own survival mode. You didn’t have to go crazy building elaborate spaces to hide away in, but you would take the time anyway to do so. The same can pretty much be said about Terraria.

While the adventure in LEGO Worlds is a bit on the weirder side, it ultimately boils down to a LEGO-filled Minecraft. Your bricks are the landscape, and there’s no limit as to what you can create. Sure, you may not set out to recreate the entire country of Denmark, but a giant LEGO dinosaur is just as cool. Exploration, survival, and construction create a well-rounded experience that Minecraft fans will feel at home in.

Minecraft may get credit for its take on survival, adventure, and building, but it’s far from the first to dominate the market. Roblox was released in 2006, providing players with a varied and customizable experience built around the concept of allowing players to build their own world using a set collection of resources.

Like Minecraft, Roblox evolved over time to include different game modes. If players could dream it, it’s likely that they could recreate it in Roblox. There have even been iterations of Call of Duty created using Roblox assets. Minecraft hasn’t quite gotten to that level, but the two are relatively similar in just how varied the experience can get. Then again, you can always just simplify your time in-game and focus heavily on the building.

READ NEXT: 10 Games Like Apex Legends You Should Play