Home
Gaming
10 Games Like Terraria You Should Play
Gaming

Terraria fan? Check these out. 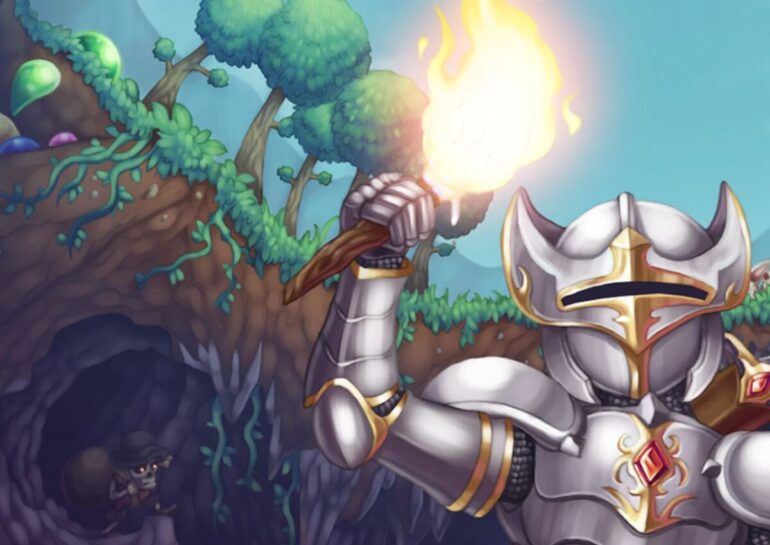 In 2020, Terraria’s developers, Re-Logic, launched the game’s last major content patch. The appropriately titled Journey’s End update concluded a near-decade of constant development which saw the game slip out of the massive shadow of Minecraft and grow into a juggernaut in its own right.

So what’s a Terraria fan to do now that developers Re-Logic are ready to move on to their next project? Lucky for you, there’s a whole world of incredible games that share Terraria’s spirit for exploration and emergent creativity. Here, we’ve rounded up some of the best games like Terraria you should be checking out.

Starbound is often referred to as “Terraria in space” due to how it looks, feels, and plays like Terraria. But while Terraria confines you to a single, randomly-generated map (huge as it may be), Starbound throws you into an adventure that crosses worlds.

Fans of Terraria will love the sheer variety in Starbound’s countless worlds. Each world’s geography is procedurally generated from more than a dozen types to ensure a unique experience every time you step foot on a new planet. Although no single planet in Starbound can compare to the sheer scale of a map in Terraria, there are so many different places to explore with their own wildlife and environmental challenges that you’ll never run out of things to do.

You’d be hard pressed to find any game anywhere that’s more similar to Terraria than Starbound. Those similarities should make transitioning to Starbound effortless for Terraria fans.

Scrapnaut is a straightforward survival game with a steampunk aesthetic and an emphasis on base building. Players explore a future world intent on choking the life out of you, but you’re not going to let it.

Use all of your wits and resourcefulness to carve out a haven for yourself in this cruel landscape. Grow and harvest crops, construct shelter and walls, you can even set up electricity and water systems for maximum comfort.

Monsters roam the land outside of your walls. Craft weapons and armor for a fighting chance at survival. Valuable materials and rare weapons key to your survival can only be found on a scavenging run, forcing players to leave the safety of their home bases and chance a run through the unpredictable dangers of the outside world.

Although it’s still in Steam Early Access, Scrapnaut shows a lot of promise. It doesn’t reinvent the wheel — a lot of the mechanics and systems should be instantly familiar to those who love survival sandbox games — but there’s a polish in its execution that makes for a gratifying gaming experience.

In Don’t Starve, players scavenge materials and craft gear and tools to survive in a dark fantasy world plucked out of a Tim Burton fever dream.

The island of Don’t Starve is cold and unforgiving, a place where even the shadows are out to drive you mad. Its bestiary of monsters and creepy crawlies — including a race of pig-men that will make your skin crawl — inject real fear into each moment away from the safety of your campfire. And the depressive monochrome and jigsaw-jagged edges make for a stark contrast to the vibrant, colorful maps of Terraria.

Despite looking almost nothing like Terraria, Don’t Starve has that same focus on creative problem-solving and exploration that will suck you in for hours at a time. Be sure to try out the excellent multiplayer coop that supports up to six players. That way, you and your friends can all lose sleep together.

Planet Centauri is a 2D sandbox survival-adventure game where players must build and protect a tribe of NPCs under threat from foreign invaders. The basic gameplay mechanics of any good open-world creative game are all here — gather materials, craft items, fight off baddies — but Planet Centauri’s main selling point is its monster taming.

The game is set in a planet filled with all sorts of wildlife that you can capture and then summon in battle, from the simple chicken to dinosaurs the size of buildings. There are currently more than 50 different monster types in Planet Centauri, with more being added in all the time.

The game is also moddable, and there are tons of community mods that add new features, monsters, and improved AI. If you’re familiar with LUA script, you can even start making your own mods.

Planet Centauri is in Early Access, so it’s still a bit rough around the edges, but it’s supported by a passionate dev team that releases updates almost every month. If you want Terraria with spellcrafting, narrative-driven city building, and a pinch of Pokémon, then look no further.

Space Engineers is a voxel-based multiplayer sandbox for those that prefer something a bit more rooted in reality. Its gameplay is driven by a powerful physics system that adds a level of realism to the world.

You can exploit a planet until its resources run dry, build a base on an alien planet, or construct custom spaceships and engage in starfights against rival factions controlled by other players or AI. In fact, sometimes all that freedom can be overwhelming — what should you do when you can do anything? Space Engineers offers no answers nor raison d’etre; just a simulated universe for you to exist in.

Space Engineers is as much a sim as it is a game for creativity. Its uncompromising dedication to physics realism will dissuade many coming into Space Engineers from Terraria, but if you stick with it and master the controls, there’s a satisfaction and sense of accomplishment that’s second to none.

We’ve talked about two games that take you on a journey through the stars. Subnautica takes you on a deep dive into the sea.

You’re the sole survivor after your spaceship crash lands on an alien planet, which puts you in an escape pod floating in the middle of the ocean. In keeping with survival-adventure tradition, you must explore the environment around you, collect raw materials, and craft items that will eventually allow you to call for help and go home.

Things start off innocuously. The waters around you are clear, the wildlife is harmless, and the view is absolutely incredible. But the further and further you explore away from your lander, the deeper and darker the waters get, and who knows what creatures lurk in wait for their next meal.

Subnautica is a more exploration-driven experience than many of the games on this list. It’s also a deep sea horror with expert pacing that will have your heart beating in jumps and starts throughout.

Grounded is a survival game where the player has been shrunk down to the size of a bug and thrown into their backyard. Up to four players can band together to survive in this oversized world where ants are the size of a triceratops. You must gather materials and fight to survive using an arsenal of makeshift weapons cobbled together from twigs and leaves.

There’s a story mode that delves into how and why the players find themselves in their bite-sized conundrum, though it’s currently still under development (the game is in early access). Of course, players will be spending the majority of their time in the sandbox survival mode, where the real challenge lies.

Grounded is a solid solo experience that’s elevated by some excellent multiplayer, so be sure to bring a few friends along for the ride.

Raft is a game about building floating fortresses of flotsam to conquer the high seas. You start with nothing but your raft, but you can pick up debris and wreckage from drowned ships to attach to your boat.

Things get crazy pretty quickly. Over time, you gather up enough floating debris to create some insane and intricate designs. We’re not just talking about huge boats; you can literally build a floating mansion out of wreckage and duct tape. Just don’t forget to throw together the tools you need to stay alive — what could be worse than dying of thirst in the middle of the ocean?

Raft isn’t afraid to take things slowly, making it a mostly relaxing experience with the occasional threat, like sharks or dive bombing birds, to get your heart pounding.

Factorio proves that the only thing more enjoyable than collecting items to craft into other items is building machines to do it all for you. This automation/management sim tasks players with crafting industrial automated monstrosities for the purpose of sucking a planet dry of its natural resources.

On a planet without human life, you’re free to dig, strip, and mine every inch of the surface without having to worry about the inconvenient consequences, like extreme pollution and climate change. Construct groundbreaking extractors to pull raw materials right out of the ground, then transport those materials via massive conveyor belts that stretch over kilometers of wildland where they feed into yet another machine, and so on.

Factorio will turn you into an obsessive for extreme machine efficiency. Prepare to spend weeks designing a facility only to scrap it because of a single, glaring inefficiency. You’ve been warned.

Rust is a shining example of what we can accomplish with limited resources when we just work together. A quick search on YouTube returns hundreds of genuinely jaw-dropping architectural creations built with sheet metal and brick.

Rust is also a horrifying window into the potential for depravity of individuals armed with anonymity. New players are regularly tortured, bullied, and humiliated for no discernible reason and to no benefit to the abuser. You can’t even go to sleep because you may wake up the next morning to find your doors and all your loot gone.

Rust’s dog-eat-dog post-apocalypse presents a compelling survival challenge best suited for those with nerves of steel (or psychopathic tendencies). Just be prepared to lose a bit of faith in your fellow man.

READ NEXT: 10 Games Like Stardew Valley You Should Check Out