Need to play more life away from life? 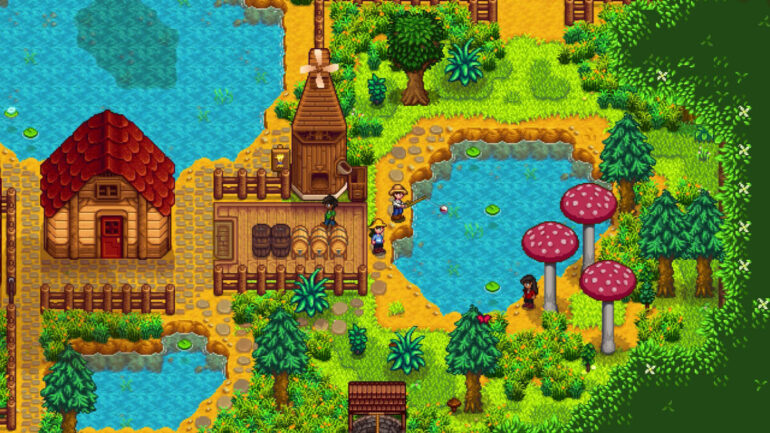 Heavily inspired by classic Harvest Moon, Stardew Valley invites players to the countryside for a bit of farming, fishing, and chit chat with the locals. If you’ve played it and are yearning for more, here’s a list of 10 games like Stardew Valley in no particular order.

Story of Seasons is developed by the team responsible for Harvest Moon up until 2014 when developers Marvelous left their publisher Natsume, which owns the Harvest Moon license.

The Story of Seasons series hits all the same notes as Stardew Valley. Just like in Valley, your character inherits a rundown old farm that they must turn into a successful business. You can grow crops, tend to livestock, interact with townsfolk, fall in love, and even start a family.

Seasons is set in a tamer, more cartoonish setting than Valley, and the childish atmosphere and visual style won’t be everyone’s cup of tea. Still, if you’re in search of a gaming experience that’s just like Stardew Valley, there’s nothing closer than Story of Seasons.

9. My Time At Portia 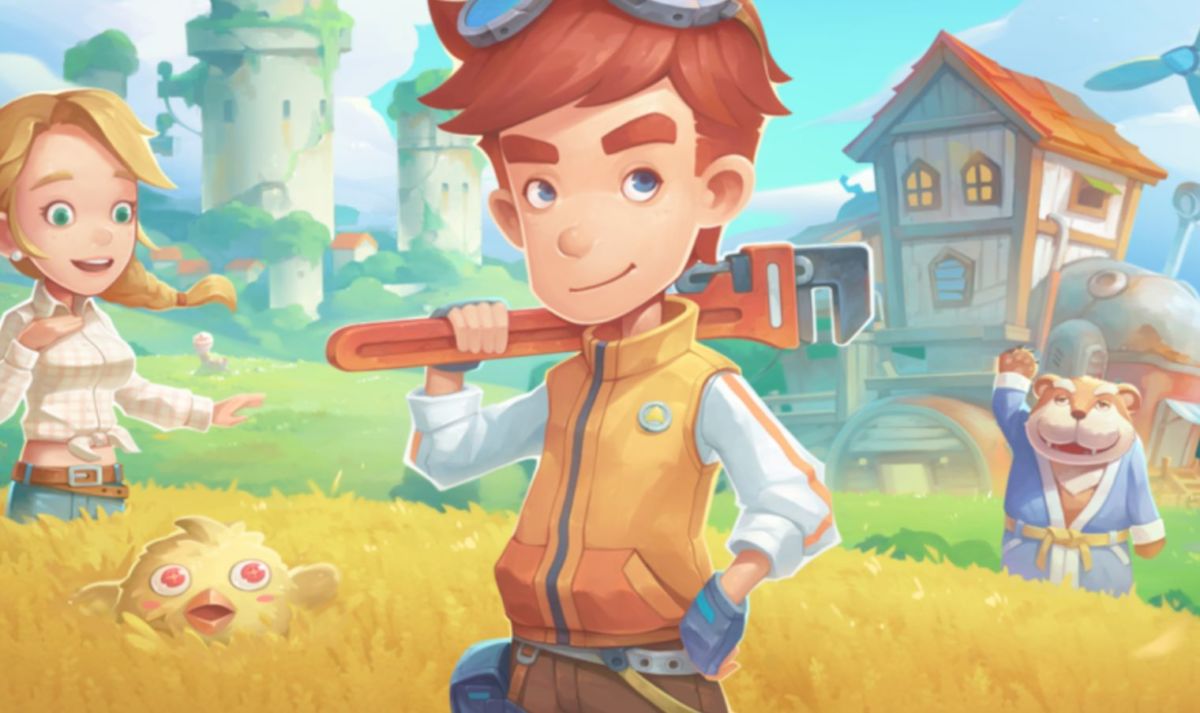 My Time At Portia has been described as a 3D version of Stardew Valley, but that’s not entirely true. While all the key elements are there for a great Harvest Moon clone, the added focus on crafting and town building makes you feel like your actions have a permanent effect on the people and environment around you; something that Valley only attempts once or twice.

You wouldn’t know it from the bright colors and stylized characters, but the game is set in a post-apocalypse. Knowing that mankind has to start from scratch gives a sort of grim context to all the construction work and monster hunting you do.

So while Valley offers a countryside escape from the hectic urban lifestyle, Portia is set in a world that’s hard at work rebuilding civilization, which means a great emphasis on construction and resource gathering, and less on socializing and casual farming.

Farm Together lets you do just what its name suggests. Groups of up to 16 players can join a session and manage a farm together.

Farm Together is a much more laid back experience than anything else on this list. With no fatigue system or primary objective, you’re never in a hurry to do anything. There are no fail states, either. Just grow your farm as big as you like and at your own pace.

Plants grow before your eyes instead of in daily increments, so there’s no way to skip ahead to the next day. This means you’ll have to wait several real-world minutes before the seed you plant is mature enough to harvest. Such time walls can be disconcerting — it’s a mechanic that’s rarely used outside of the free-to-play mobile games space — but if you’re willing to relinquish some control and take things slow, you’ll find a game that’s just as rewarding as any other on this list.

Moonlighter takes the classic hero’s tale and turns it on its head. You aren’t the gallant knight in shining armor off to save the day. Instead, you’re Will, an adventurous young shopkeep with aspirations for herodom.

Will spends his nights delving into dark dungeons styled after A Link to the Past’s underground labyrinths. And during the day, he sells whatever valuables he’s collected in his nightly forays to warriors and adventures that pass through his shop.

Both aspects of Will’s life are equally important in Moonlighter. Selling wares allows Will to buy the weapons and gear for his twilight excursions, and he must explore the randomly-generated dungeons to find materials and goods to sell in his shop.

Stardew Valley is arguably more about time management than harvesting crops: how many activities can you cram into a day before you drop from exhaustion? In Moonlighter, the challenge lies in managing the balance between Will’s thirst for adventure and the demands of his day job. That push and pull between Will’s two lives makes for a satisfyingly delicious gameplay loop that will have Stardew Valley fans hooked.

Kynseed is developed by a team that was involved with the Fable series. It boasts incredibly detailed pixel art and a unique mechanic where your family’s story is told across generations.

While other games on this list might allow your character to develop relationships and start a family, Kynseed takes that concept to a whole new level. Your characters age and eventually die, and when they do, the responsibility of managing your farmlands falls to their children, allowing for stories to carry on through multiple generations.

Funnily enough, cross-generational storytelling was one of the many features promised for (and famously left out of) the original Fable way back in the early aughties. It may have taken more than 15 years, but PixelCount is finally letting us see the potential of the mechanic for creating deep, emergent narratives.

In No Place Like Home, you play as a human Wall-E tasked with cleaning up Earth after mankind has left it behind for greener pastures. The protagonist navigates the world with a portable vacuum cleaner backpack that allows her to collect scrap metal and junk, which can be crafted into items and tools for farming and other activities.

Since the world is mostly abandoned, there’s less of an emphasis on socializing, though you will encounter the occasional NPC who’ll teach you skills or give you quests.

No Place Like Home is more action-survival than it is farming sim, which might dissuade those looking for a more traditional Stardew-esque experience. But if you’re down for something bold and new (and you don’t mind Early Access titles), you can get No Place Like Home for dirt cheap on Steam.

The premise is familiar: your grandparents have left you their home, but it’s a fixer-upper. After a bit of house cleaning, the house and the nearby farm are officially yours.

Variety is the name of the game; it feels like there are a million and one things you can do in Garden Paws, from farming to fishing, even opening up your own shop. You’ll have to try each of them at least once as there’s a surprising amount of depth to each of these career options, and you’re free to explore them at any time.

You can pick from a selection of super cute animals, and there are customization options so you can give your character a totally unique look. That customizability is important because the game supports real-time multiplayer with friends, which works quite well considering the game’s current Early Access state.

Littlewood begins after your character has defeated the evil wizard and saved the world. However, that epic battle has left you without any memory of who and where you are. But since you’re a hero, the people of Littlewood look to you to rebuild their town, and thus begins your quest to provide food and build structures to attract villagers to this lonely lot in the middle of the woods.

As word about Littlewood spreads throughout the continent of Salem, you’ll find more and more people are stopping by to say hello, including key figures from your forgotten past. And so the mystery of the protagonist slowly but surely unravels, which makes for a powerful driving force behind all the mining and farming and building.

Littlewood employs an interesting character development lifted right out of Runescape. Almost every activity in the game is tied to some skill bar. Every time you perform a task, you earn experience points that go toward leveling up that skill and allowing you to do it more efficiently.

Forager is a game about exploration, crafting, and, most of all, collecting.

Any Stardew Valley player will tell you there’s nothing more pleasing than that little pop sound that plays when you pick something up. It could be a wildflower or a rock; something about collecting things caters to a part of the brain that enjoys counting and owning. Now imagine someone built a game entirely around that sensation.

Forager combines idle game mechanics with the free roaming and farming of Stardew Valley and the automation management aspects of Factorio. With just your backpack and a pickaxe, collect the resources around you to build your tiny island into a massive automated monstrosity, with self-running farms and machines that produce materials by feeding materials into other machines.

Graveyard Keeper puts a macabre twist on the management and life simulator formula. Instead of growing crops and selling produce on the market, you’re in charge of a graveyard. Think Stardew Valley, but if you could only profit from dead bodies.

Tending to graves and burying corpses is simple work, but you’re not going to get rich just digging holes and dusting off gravestones. Fortunately, there’s always an opportunity to make money, even in the grave keeping business, all you have to do is break a few laws. You could sell meat to the local butcher, dump bodies into the river to save space, or harvest and sell organs to the right buyer.

Stardew Valley is available now for PC, PS4, Xbox One, and Switch.

READ NEXT: 50 Best Indie Games of All Time