Graveyard Keeper (PC) REVIEW – Not Quite A Keeper 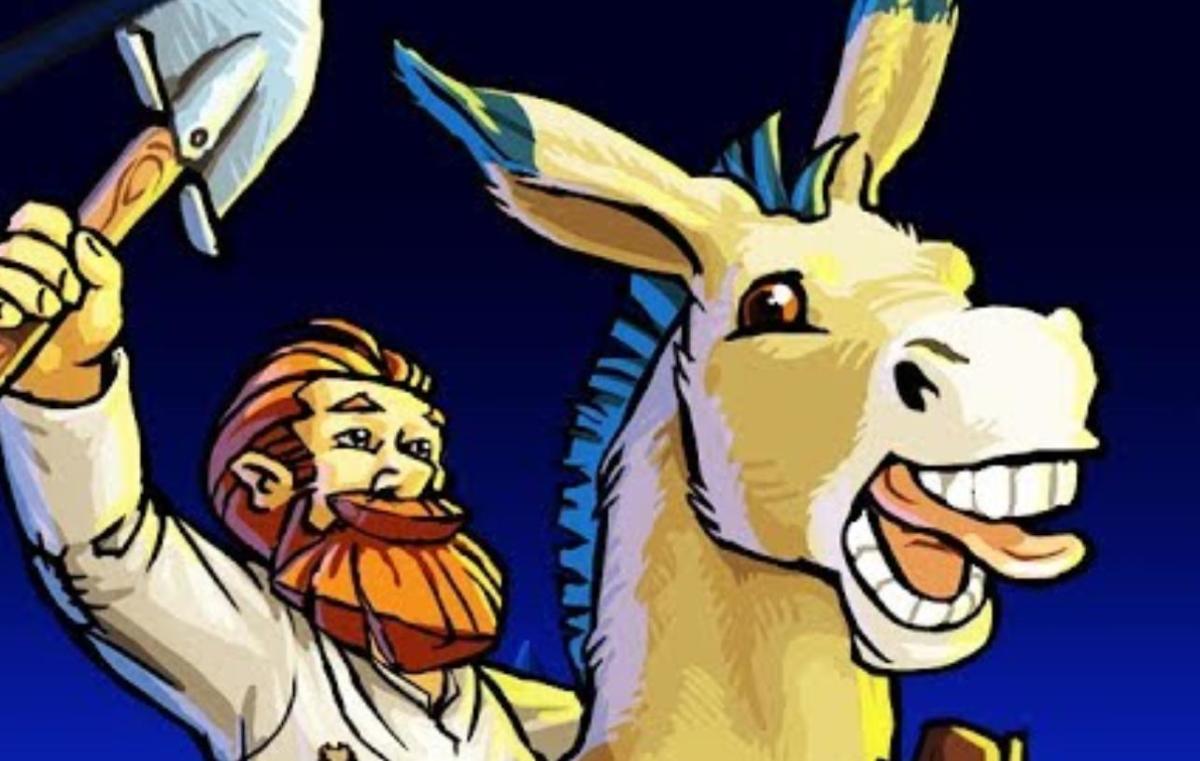 Graveyard Keeper is a game which hasn’t really been on my radar before now and I’ve no idea why. Typically, this is the sort of game that’s so far up my street it’s gone into the paper shop on the corner and bought a carton of Um Bongo. A building/management sim with a wicked sense of humour and retro visuals. Where do I sign up?

So let’s address the big, whacking great elephant in the middle of the dining room: Stardew Valley. I do fully believe that Graveyard Keeper, despite its looks and gameplay elements, is a fundamentally different game to Stardew Valley. It is obviously heavily inspired by Stardew as its DNA feels rather familiar, but at its heart it is a different beast, albeit a familiar one. Despite this, it feels hard not to compare the two titles. 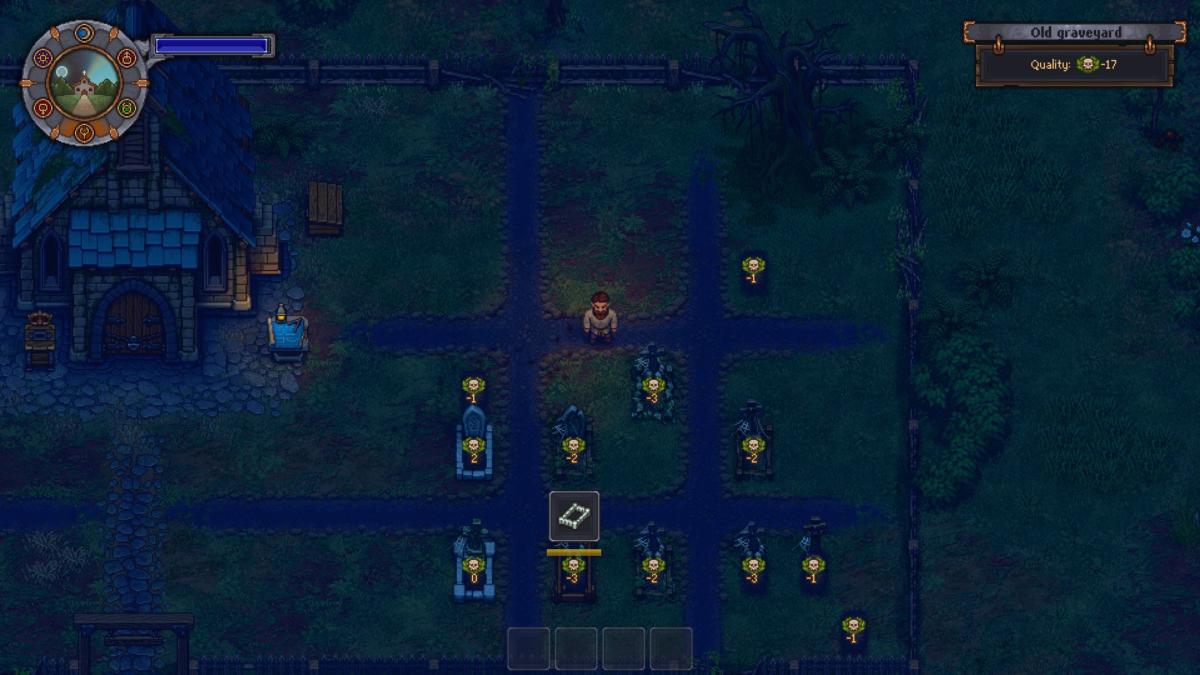 Graveyard Keeper looks amazing. It manages to add depth, colour and realism, all while remaining retro, toned-down and cartoon-y. The world manages to feel alien, yet familiar, and the game is bathed in a silly humour which makes it very endearing. Its sound is also great, and it’s these elements that make this game stand out against Stardew Valley.
However, its gameplay lets it down a little.

And that is disappointing because when you first get to grips with the game, it feels a lot sharper than Stardew. Pressing the F button will make the character ‘work’, be it digging, building of chopping a tree, keeping it held down and the character will automatically work on the next thing if it is close enough. It’s a minor addition to the game but it makes the process of working a lot easier. 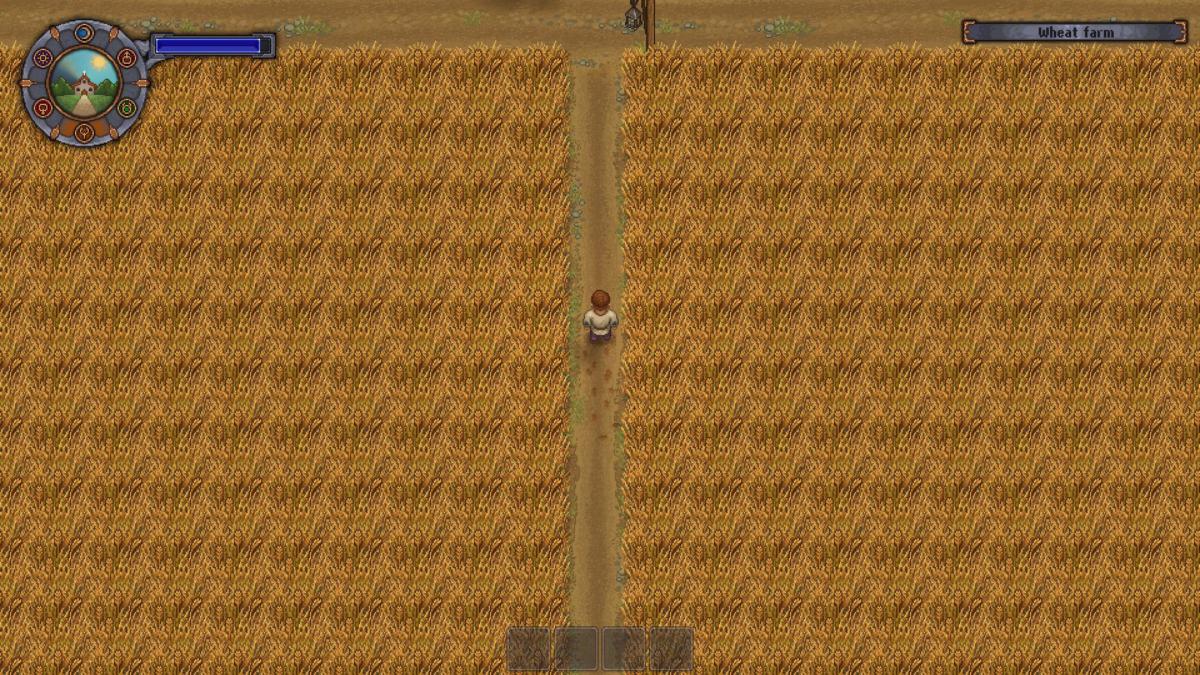 In its early going, Graveyard Keeper feels like a spiritual sequel to Stardew Valley,it doesn’t last. First of all, The actual keeping of the Graveyard feels a little too optional, and much of the work that you might want to do is locked behind experience walls. I totally understand this aspect of the game, but at the same time it’s frustrating to work on the graveyard in mere dribs and drabs.

Graveyard Keeper struggles with progression. If your game gives everything upfront then it leaves nothing to progress to, if it doesn’t give enough it can become a slog to work through. Graveyard Keeper is the latter. With much locked off when you start, it takes a lot of work to get experience to unlock new stuff. This wouldn’t be a bad thing, until you discover the direction of the game. 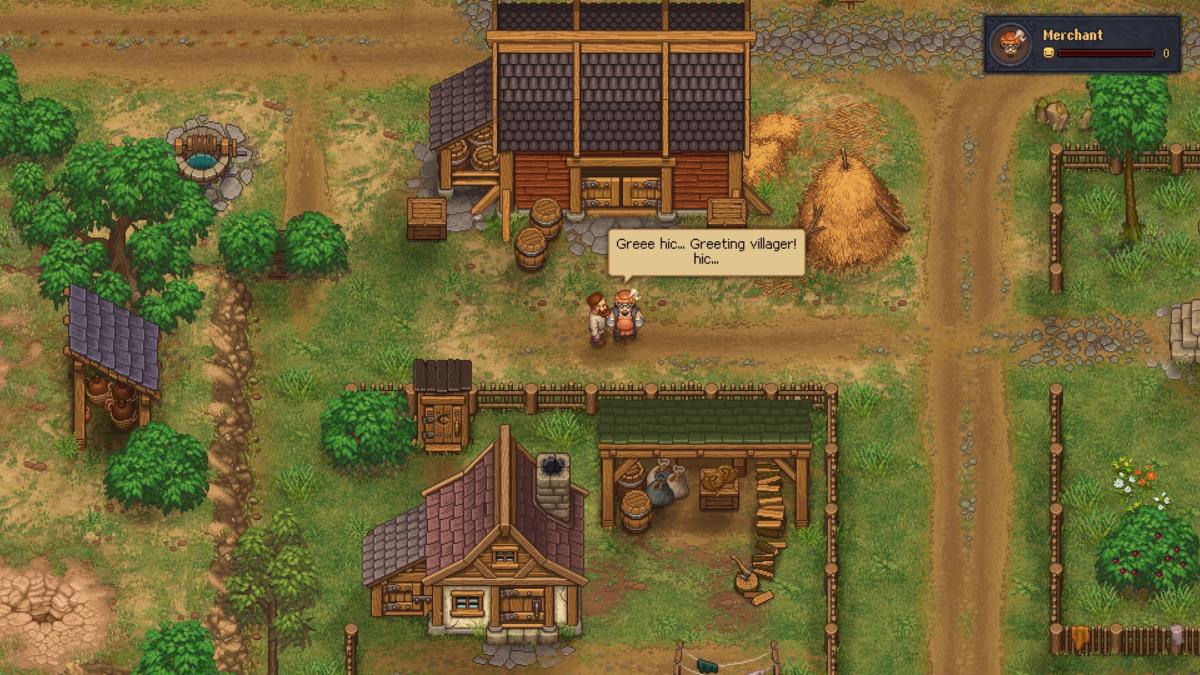 At the start, you’re given a few choice instructions and directions on what to do. Again this felt a little more modern than it did with Stardew, but after half hour or so, it leaves you to your own devices, which would be fine if it wasn’t so vague as to what to do next. At the beginning of the game, you can do very little apart from find ways to earn money, then with money you can buy stuff and either spend time figuring out what to do next, or, more likely, check a wiki.

While Stardew Valley isn’t technically as deep as Graveyard Keeper, it had a neat trick up its sleeve. It’s a farming game, and it gives you all you need to farm at the very start of the game. Plant seeds, watch them grow, harvest them, sell them, buy seeds and repeat. In theory, if all you wanted out of Stardew was farming, then it’s there for you from the off. The game is deeper than that, and you can delve into those aspects if you so wish, but you don’t have to. 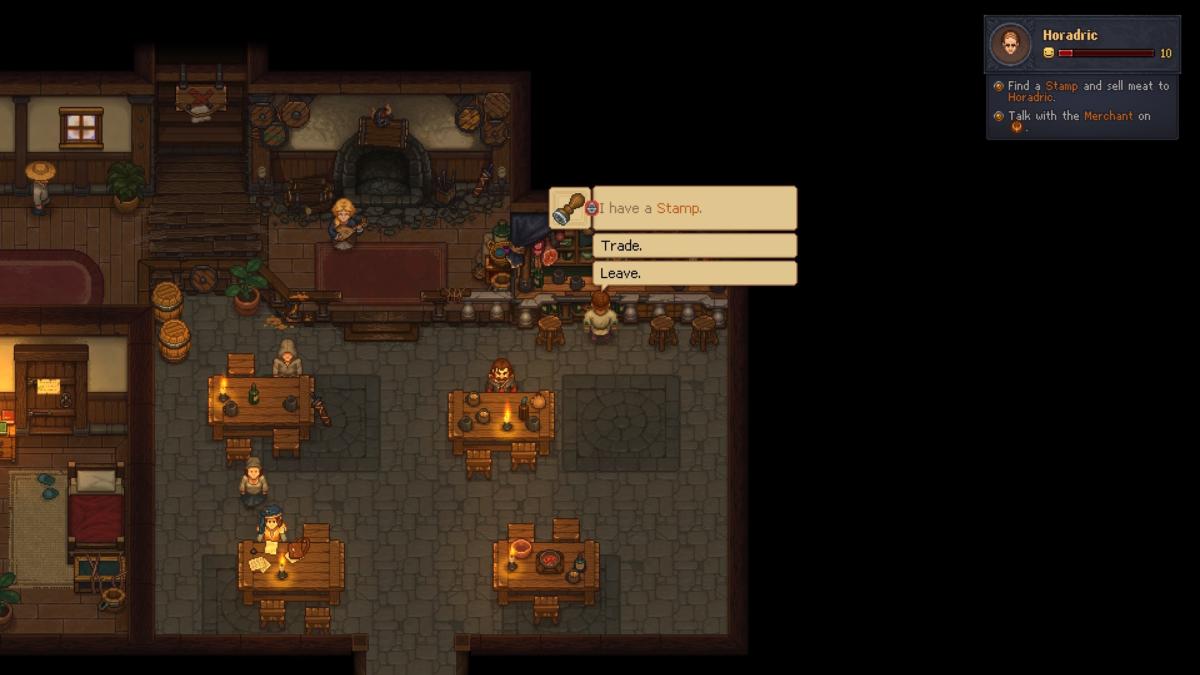 With Graveyard Keeper, you’re forced into those depths. There’s no ‘base game’ as such without unlocking the skills to do it, and to be honest it feels a little off-putting. Also, the game doesn’t hold you by the hand, which is good, as many games today are far too quick to spoon-feed you the gameplay. But here, it just feels all too vague to really enjoy.

The game feels a little ‘grindy’ at times, with you having to perform tasks you don’t really want to do in order to get to the next thing you do want to do. It feels like, I want to do Z, but I can’t do it until I rigidly do X and Y first. This is a standard rule of many video games, but some hide it better than others, and here it’s a little blatant and it leaves the game feeling rather linear.

These issues mixed with the grinding, stagnating progression and a limited inventory (and lots and lots of items) leaves the game feeling like a mixed bag. The visuals are lovely and the feel of the gameplay is intuitive and smooth. There’s some great humour and some features are a real improvement over Stardew Valley.

When I had to play Graveyard Keeper it felt more like work as opposed to play, and that isn’t a good thing. I have no doubt I shall return to this game at some point, I can see there is something there and the devs have already dropped patches to the game which may improve the core gameplay. Graveyard Keeper isn’t a bad game, but it has become bogged down with trying to be bigger and more in depth than games that have come before it and in doing so has is a little too confusing and spreads itself too thinly.

Verdict
A game trying to be deeper than its inspirations, but ends up digging a little too deep. Microtransactions: none
6