Wrigley the Worm is the greatest NPC in video game history. This is the hill we die on. 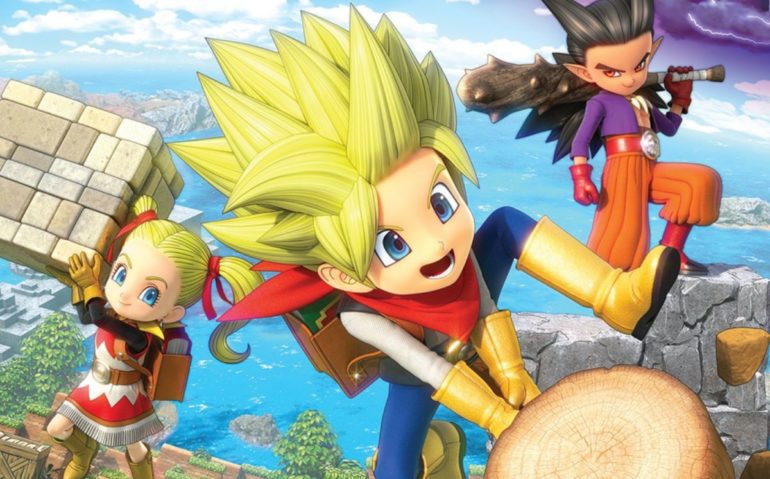 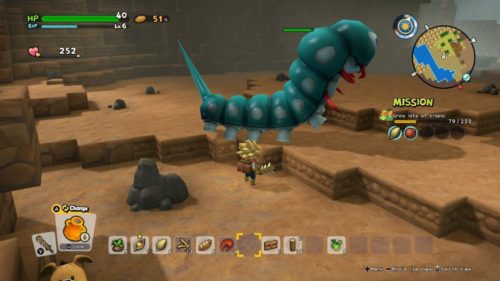 I nearly gave up on Dragon Quest Builders 2. I had spent around five hours plowing through endless text bubbles, forced pauses and glacial tutorials. Then I met Wrigley. He was cornered by a bunch of monsters, so I helped him out and now he helps me by making good soil for planting crops. Wrigley is an earthworm, an earthworm wearing a shirt and a straw hat. Wrigley is an earthworm who speaks with the heaviest country bumpkin accent I have heard in years. Wrigley is awesome.

Wrigley melted my desire to constantly optimize and push on, to rush towards the next tech increase. Wrigley made me open to what Dragon Quest Builders 2 had been trying to show me all along. That this game is more than just a survival/creation game of the Conan Exiles or Ark: Survival Evolved ilk. In contrast to those games, Dragon Quest Builders 2 is about talking to NPCs and making friends. Sure, you will still spend a lot of time exploring, crafting, cooking and, of course, building. However, compared to pretty much any other game in this genre, writing and character development is very much in the forefront.

Luckily, these parts are excellently executed. The writing is great and shows the characters’ different personalities and quirks. There are also a great number of characters to find and meet throughout the islands you are sent to explore. For a JRPG, this is nothing new, but compared to what is being offered in terms of story and characters in other survival games, it’s lightyears above and beyond anything I have ever laid my grubby hands on.

On a surface level, the gameplay is fairly simple and what you expect from these types of games. You explore the land, bring back resources, and develop your base. However, underneath all of this, there is a lot of great innovation on the formula. One of these is the room system: the size and what you put inside a room will determine its characteristics. Place a haystack and a chest inside a small room and it will become a barn. Put a number of bonfires and logs inside another and you have a kitchen. It might not sound like much, but it feeds greatly into how the AI functions and make use of the things inside of them. 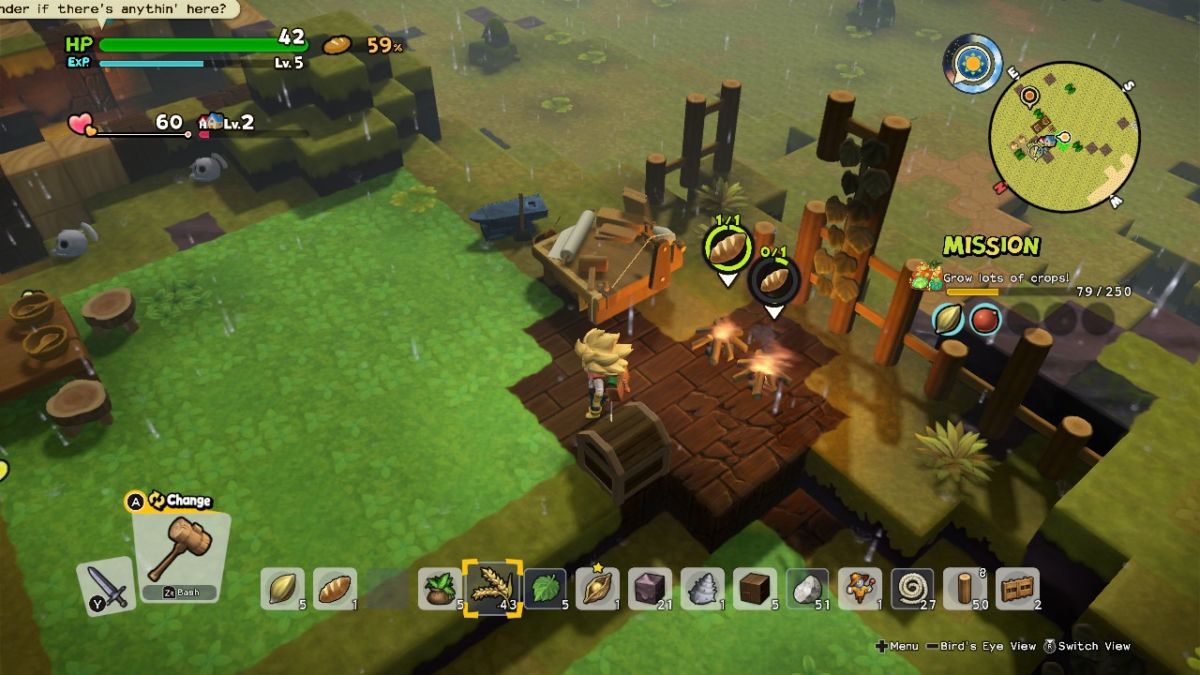 Speaking of which, having an AI who can actually act and help out with things at the base makes everything feel so much more alive. Being so used to — and tired of — having NPCs just stand around a designated station doing little besides providing some hidden stat buff, they feel practically alive here. In Dragon Quest Builders 2, the NPCs get up in the morning, eat breakfast, go to the bathroom and then help out with whatever they can do. The base is constantly full of movement and life and it goes a long way towards making things feel more important.

In the same way, they have also made creating decorations and completing small tasks a meaningful aspect of the game. Decorating rooms or helping with cooking and chores generates goodwill: small heart icons your settlers leave behind when they are happy. Collect enough goodwill and you can upgrade your base level, which grants you more recipes, settlers and make them more capable. This might seem like a small thing on paper, but it really goes a long way in making the people who live with you actually feel like they have real lives with wants and needs. 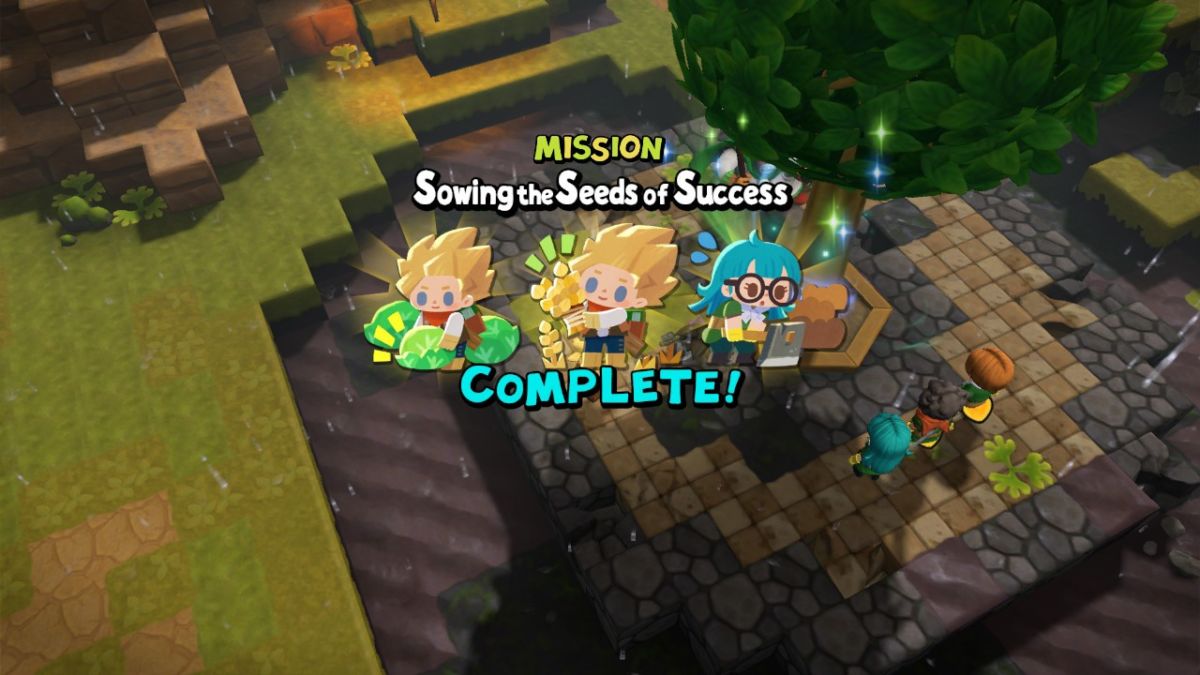 Dragon Quest Builders 2 might not be the most technically impressive game in the genre, but what it lacks in sheer fidelity it more than makes up for in charm. Everything is colored in bright pastels and all the monsters have that goofy Akria Toriyama look to them. Indeed, I could hardly keep my son away from the game during my review playthrough. The Switch version runs great and aside from having a bit of a long initial load, it runs great in both docked and handheld mode.

Another thing that sets this game apart from its peers is that it actually has a story to tell. It’s extremely telegraphed and predictable, but still has that irresistible Saturday morning cartoon vibe and charm. You enter a world where the bad guys rule the land so making new things is outlawed and seen as a sin. Being something called a Builder, this is somewhat problematic, and you start out your journey as a captive on a ship. 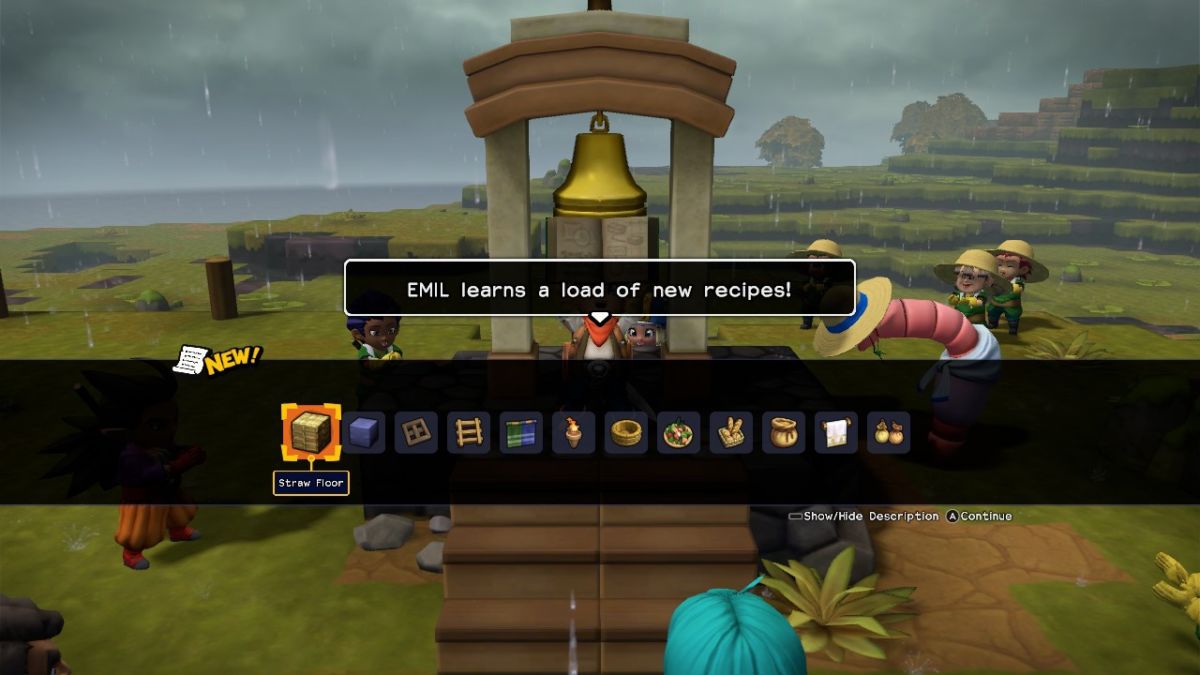 After a storm and some rough sea, you find yourself marooned on a deserted island with a red-eyed boy named Malroth, who has a penchant for destruction. It is on this island you get your first building tools and taste of the crafting systems. Since it is a rather barren place, you are soon tasked with finding things and people to bring back from the surrounding islands. Each island you visit is huge, full of mysteries, secrets, and quests to complete. I easily spent 10 hours of playtime on just the first island, so there is plenty of game to be enjoyed here.

The long hours might not always be a good thing, however. One of my few gripes with Dragon Quest Builders 2 is that it sometimes doles out things at a rather glacial pace. Having a rigid and thorough tutorial and onboarding system makes sense in a game that targets a younger audience, but it can sometimes be very grating to go through. Especially since it cannot be skipped in any way, so it is not for the impatient player. For as interested as my son is in the game, there is no way for him to actually play it for at least a couple of years, since the constant bombardment of texts and tutorials are well beyond a four-year-old. 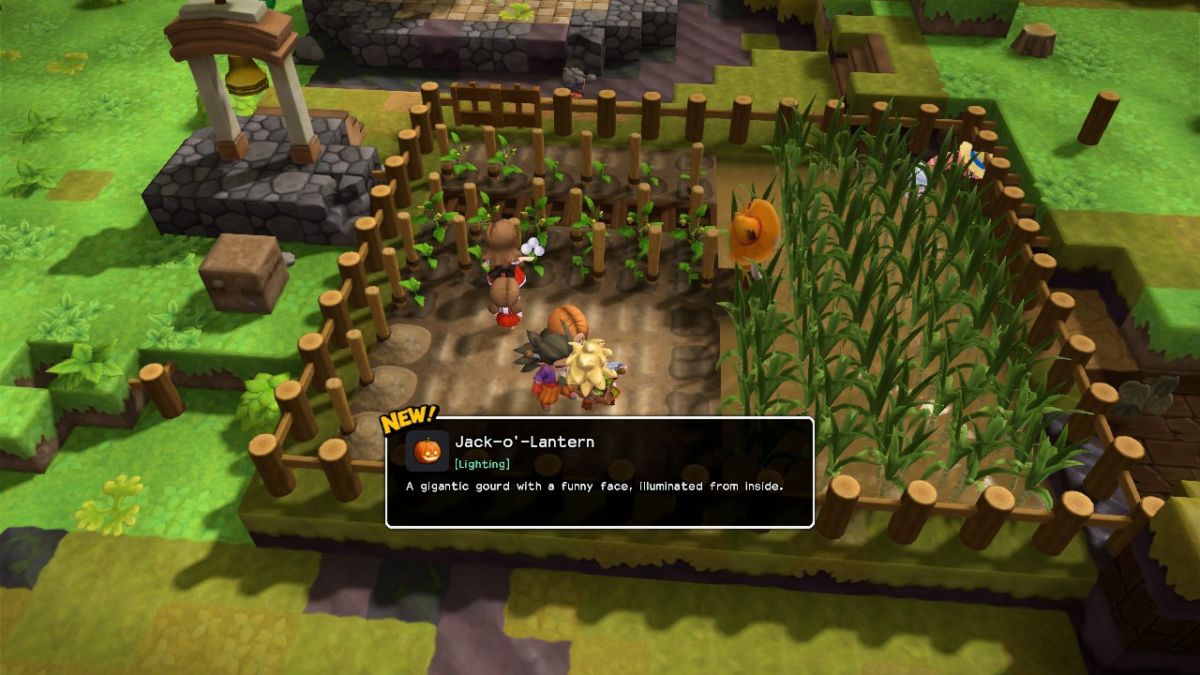 Additionally, the gameplay is very linear — you don’t have the ability to decide where to plot out your base, for instance. Furthermore, the bases usually have old ruins and structures already there, hinting at where to place things. Again, very good things for a newcomer to the genre who might not know what to do with all the tools, but it can feel very hand-holdy if you have any amount of experience with these games.

The combat can also feel a tad simple. Enemies telegraph their attacks very clearly and are usually easy to avoid. All you really need to do is keep out of the way and circle around an enemy. Together with your companions, even high-level fights tend to be a bit on the easy side.

Personally, these shortcomings didn’t end up overly impacting my enjoyment of the game overly much. The slow pace and relatively easy combat make for a great game to relax with, which fits the Switch perfectly. It’s perfect for the bed or balcony when you have a moment to wind down and just chill out with some pleasant building and quirky dialogue. 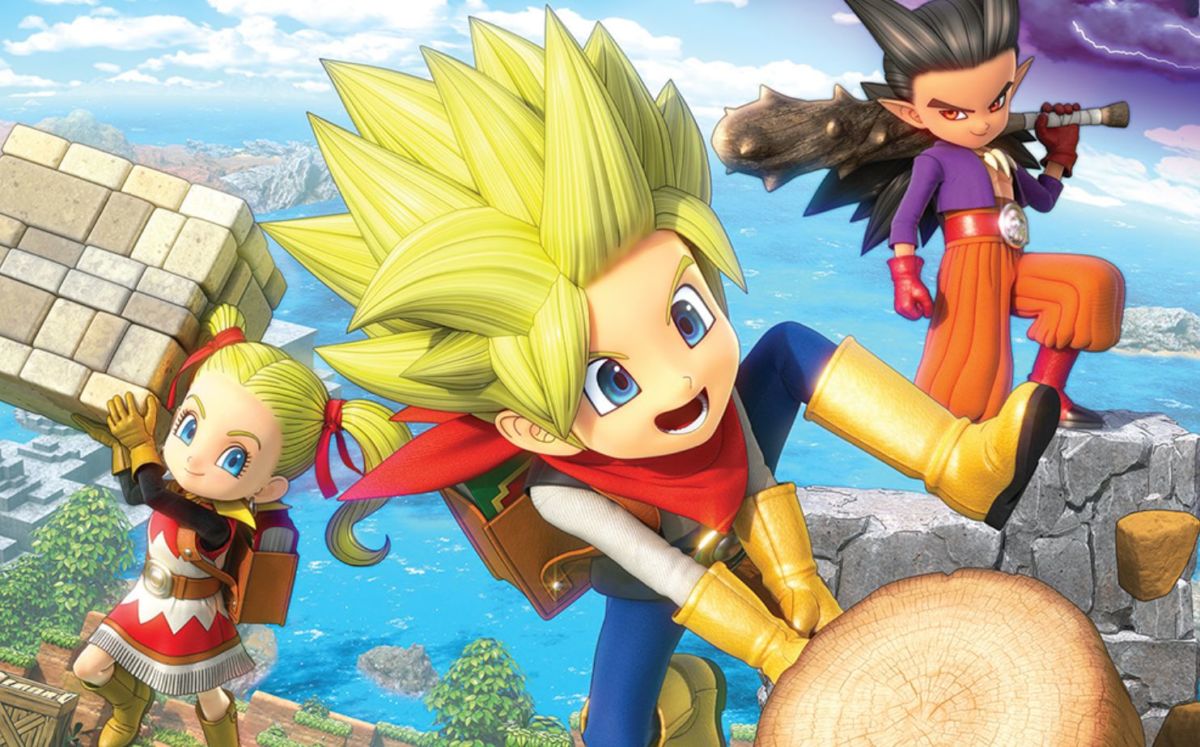 Verdict
Dragon Quest Builders 2 is a methodical adventure with a glacial pace that would have utterly destroyed a less well-crafted game. In this case, however, the strength of the visual design and the excellent writing is more than enough to gloss over those flaws.
8
Cultured Vultures is a pop culture website established in 2013 covering all things gaming, movies, and more. We eat your words.
All The News On The Biggest Games