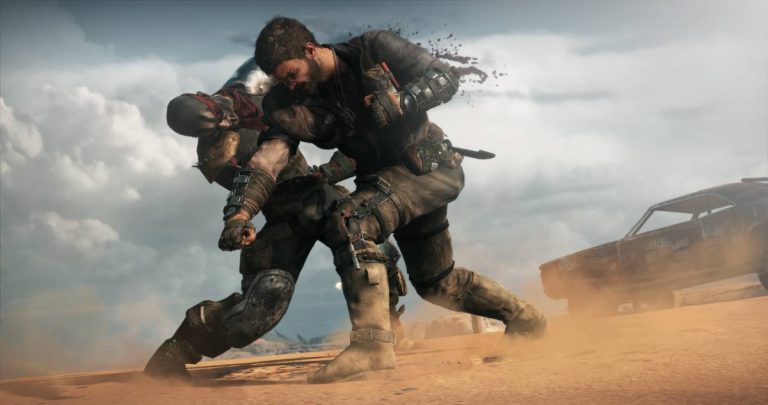 I have said it before, but it bears repeating: whoever decided that Mad Max should go head-to-head with Metal Gear Solid V: The Phantom Pain should consider a change in career. Not only will it doubtlessly have impacted its sales figures, it also means that it’s almost impossible not to compare the two when you’re playing through both in the same week. The better release is certainly not Avalanche Studios’ effort.

Having previously written a first impressions article on my early hours with Mad Max, I was anticipating to be giving this a much higher score than the one I ended up on.

A game centred around the travails of a gruff Australian by the name of Max should be pretty simple on paper. All he needs to do is drive around whilst taking names and kicking ass and you’re surely on the right path to satisfying series fans and neutrals alike. However, when said ass kicking is marred by dozens of little niggles, it’s a quicker immersion killer than realising Santa Claus isn’t real. Mad Max is overflowing with small problems that tarnish the overall picture. 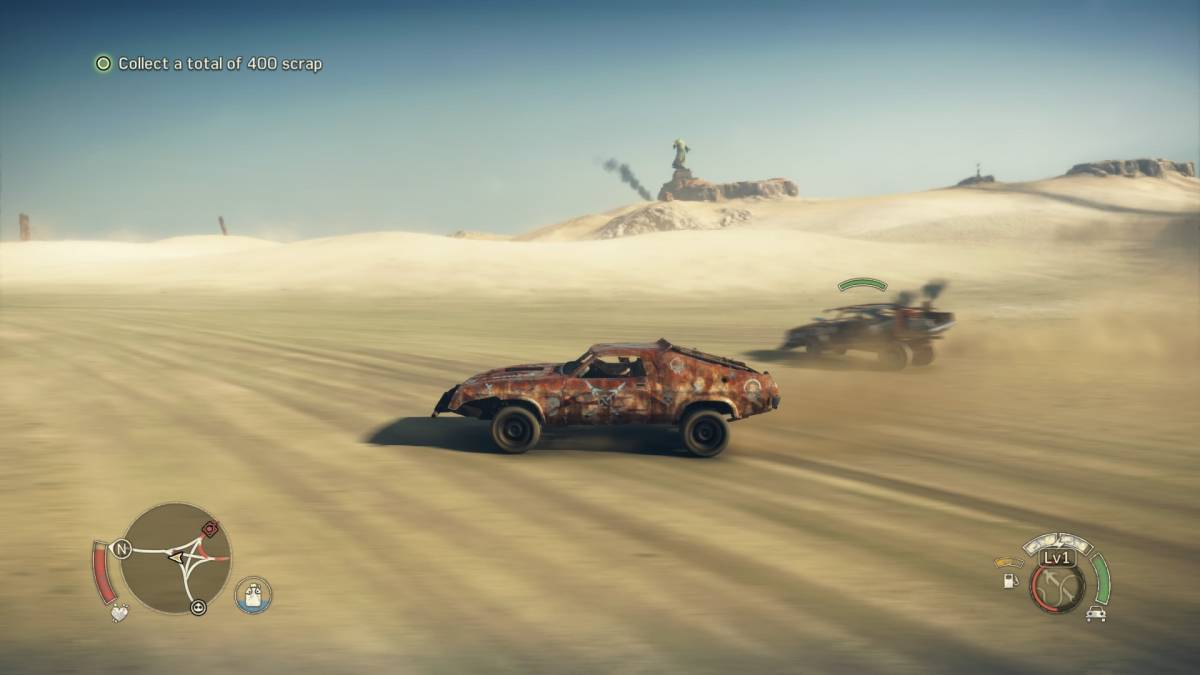 The plot of the game is straightforward: accumulate enough scrap and parts so that Max can escape the chaotic wasteland and move to somewhere more peaceful. Having been sent on a collision course with powerful faction leader Scabrous Scrotus (which must mean ‘scabby scrotum’), you team up with a Gollum-esque hunchback called Chumbucket. At a later stage, you will also be able to drive around with a dog who will hunt down mines for you, which is a neat touch.

From there, you are tasked with liberating outposts, demolishing signposts and taking down snipers in order to lower gang control in specific regions, as well as collecting the aforementioned scrap to build your car up. How you do that is up to you; one of Mad Max’s brightest lights is that it allows you to customise your vehicle with plenty of choices available to personalise it properly. As well as performance-boosting additions, you can also apply decals, change the body and spray paint it a different colour. Driving around and smashing into the naughty fuckers that make up the rest of the human race is immensely satisfying once you have upgraded enough.

Vehicular combat works well and offers an interesting dynamic between yourself and Chumbucket – he controls tools like the harpoon, which can be used to impale enemies and destroy towers, and you have control of the sniper rifle and shotgun, both limited in ammo. Long car chases are thrilling and challenging, making it feel like that much more of a win when you leave the scene with your enemies going up in flames.

In a move which has been ripped straight out of the Ubisoft playbook, Mad Max‘s open-world is filled with objectives to complete and grind your way through. There really isn’t a lot of variety here and although WB Games’ similar Shadow of Mordor is along the same lines, Mad Max pales in comparison, perhaps because there is a disconnect with Max himself.

One of the best things about the franchise is that its hero is a stoic, reserved character who has insanity bubbling beneath the surface. Seemingly as an antithesis to Tom Hardy’s depiction in Fury Road, the Max here is a chatterbox that does nothing but complain and look like Ethan from Heavy Rain. Although he is still likable, there is still the previously mentioned disconnect which makes every conquest feel far less meaningful than it potentially could. The fewer words said about Chumbucket’s constant squawking of repeated lines, the better.

Mad Max is a Frankenstein’s Monster of a video game, taking many decent ideas from different successful releases and seeing what sticks in a big, dusty open-world. With it lifting the combat from the Arkham series, the exploration elements from Assassin’s Creed and the sense of destruction from Far Cry, it doesn’t have much in the way of originality. However, if you’re going to try an ape the perfect combat from Rocksteady’s Batman series, you had better make sure you try to get somewhere near the same level of quality – Mad Max‘s system is infuriating beyond words.

Not only will Max go down with a severe case of glassjaw in about three hits, but the game seems to decide when and how it detects button presses on a whim. Parrying can be an absolute nightmare because if you are hit once, you’re likely to get caught in a maelstrom of blows and wind up at a continue screen before you know what’s going on. It’s maddening how precise you have to be when pressing the parry button and it doesn’t always work, even if you think you’ve timed it to perfection. Couple this with a camera that seems like it has a pint of whisky when it wakes up in the morning and you have a source of constant frustration. This does, however, make you feel that much more accomplished when you manage to get through a fight unscathed.

The biggest qualm to have with the game has to be just how fucking senseless the controls are, and that’s putting it gently. It goes against the norm for control schemes by swapping around what you think a command should be for the polar opposite. Clicking the left stick in brings up your objective, run is R2 and L2 is the feeblest jump seen since Malcolm in the Middle‘s Stevie entered the long jump – you have absolutely no use for it unless you want to move one inch out of the way of a speeding car. As for gun combat, I don’t even have enough expletives in my vocabulary to describe how backwards it is.

Mad Max does still have a lot going for it. In terms of feeling immersed in a world gone wrong as the last decent man alive, it does a damn fine job. This is helped by just how jaw-dropping the graphics can sometimes be – reaching a peak and marvelling at the horizon has to be one of my most memorable gaming experiences from this year. The amount of detail given to the backstory of the world you inhabit is also commendable, as well as the relics from civilisation being great little touches. These little flourishes go some way towards covering for the many niggles. 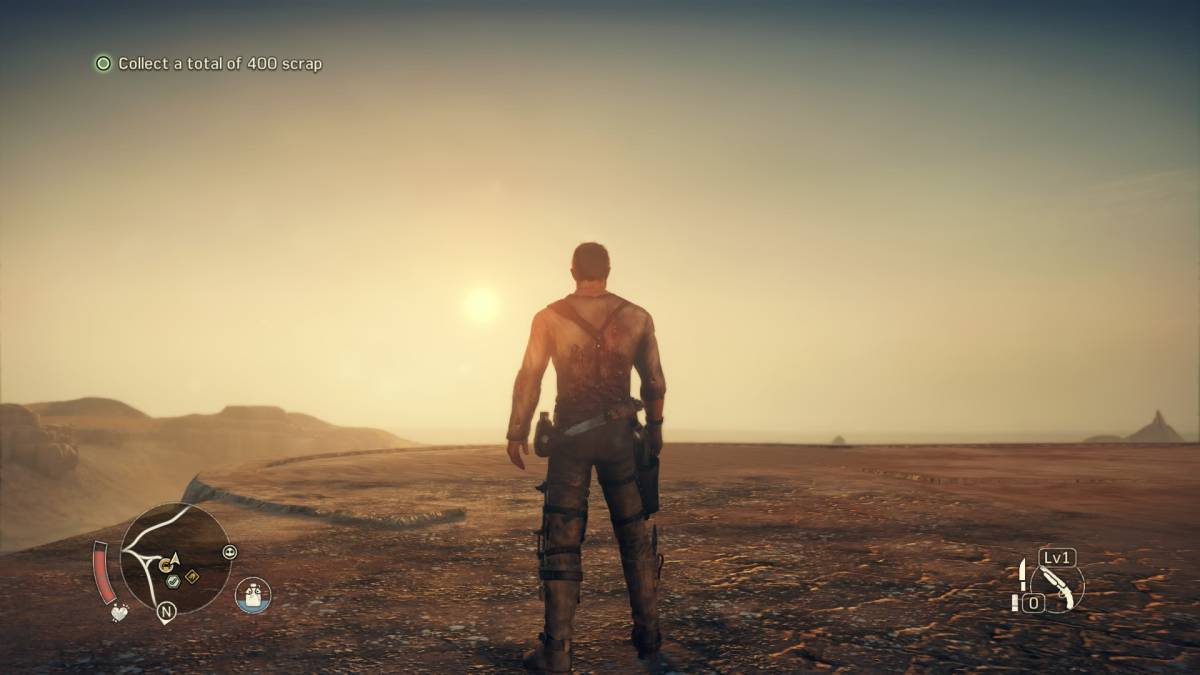 When compared to Kojima’s masterpiece, The Phantom Pain, all of the problems with Mad Max come into focus just that little bit clearer. Releasing them on the same day was suicidal from WB Games, meaning this is going to be overlooked until sales start to hit it, which is a shame. It has a lot to like, but ultimately a lot more which really takes away from the overall experience. If some of its rougher edges had been more refined, more people might not approach it as an afterthought in September’s release schedule.

Although critics have been quick to maul Mad Max, most notably Jim Sterling of the Jimquisition who gave it a 4 out of 10, it is not a bad game overall. It’s just one that tried to add too many store brand ingredients to a dish that doesn’t taste half as delicious as it should when it came out of the oven.

PROS
– You really feel like Max in a post-apocalyptic world
– It looks dang purty
– There’s a lot to see and do, giving you your money’s worth for hours and hours
– Vehicular combat is great
– The customisable vehicles is a nice addition

CONS
– Combat is wanky
– The camera is often atrocious
– The sidequests can be a serious grind, as well as parts of the main campaign
– Max is inherently unlikable
– Padded like a 12 year old girl’s bra