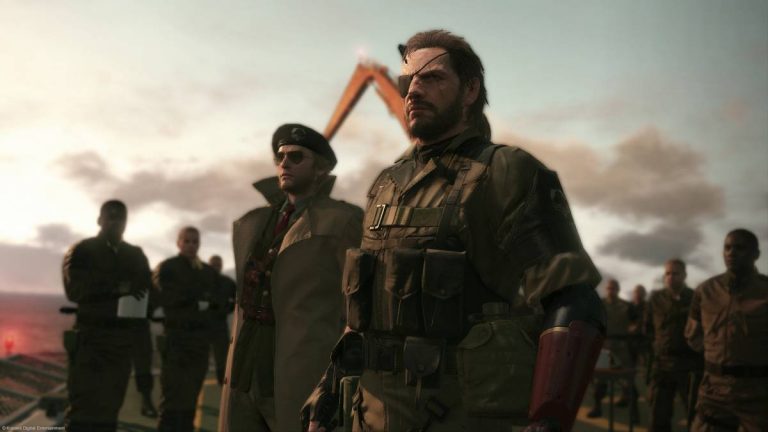 War has changed. How so? Well, now you can extract sheep from battlezones by strapping them to a fancy balloon and watching as they fly away into the sky. That’s how.

Metal Gear Solid V: The Phantom Pain is the culmination of thirty years of work from Hideo Kojima. From the early days of Metal Gear, which was released in 1987 for the MSX2, there is a noticeable incline in quality for the series in ideas, scope and design. The Phantom Pain

could very well be the best of all and probably Kojima’s finest work to date.

Set after the events of Ground Zeroes

, a questionably priced tech demo for what we have here, you assume control of a battered, world-weary Snake as he attempts to build his private army, Diamond Dogs, into one that will avenge the events at the end of the previous game. With allies by your side, Kaz and Ocelot and others that you find along the way, you are sent on a path of destruction towards Skull Face and the corrupt corporations that control developing countries.

Where previous MGS games have been mostly contained, linear experiences that are heavily narrative-driven, The Phantom Pain is more interested in telling a conflict through actual conflict rather than endless codec conversations and immersion-breaking cutscenes. Kojima has focused more on gameplay than narrative with The Phantom Pain, but hasn’t sacrificed weaving an intricate plot into the mix at the same time.

This works to create an experience unlike any other I have had during an open-world game, even when compared to this year’s The Witcher 3. When a series goes open-world, some of its imbued charm can get lost in the effort spent to make it as bug-less as possible, but MGS V has absolutely no trouble with that. Being someone that has played almost every open-world game released this year, it’s a relief to say that Kojima Productions took the game out of the corridors and facilities that it’s known for and the quality with it to create breathing, vibrant regions.

As you might anticipate with a game that has so many testosterone-pumping words in its title, Metal Gear Solid is all about combat. Being a series which has always tried to stifle your trigger finger and push you into cardboard boxes, it’s surprising to see how many approaches Snake can take here to get the job done. If you want to snipe an entire base of bad guys and leave undetected, that’s your call. Want to take them all out with a rocket launcher to the face? You can do that and not feel penalised for it. 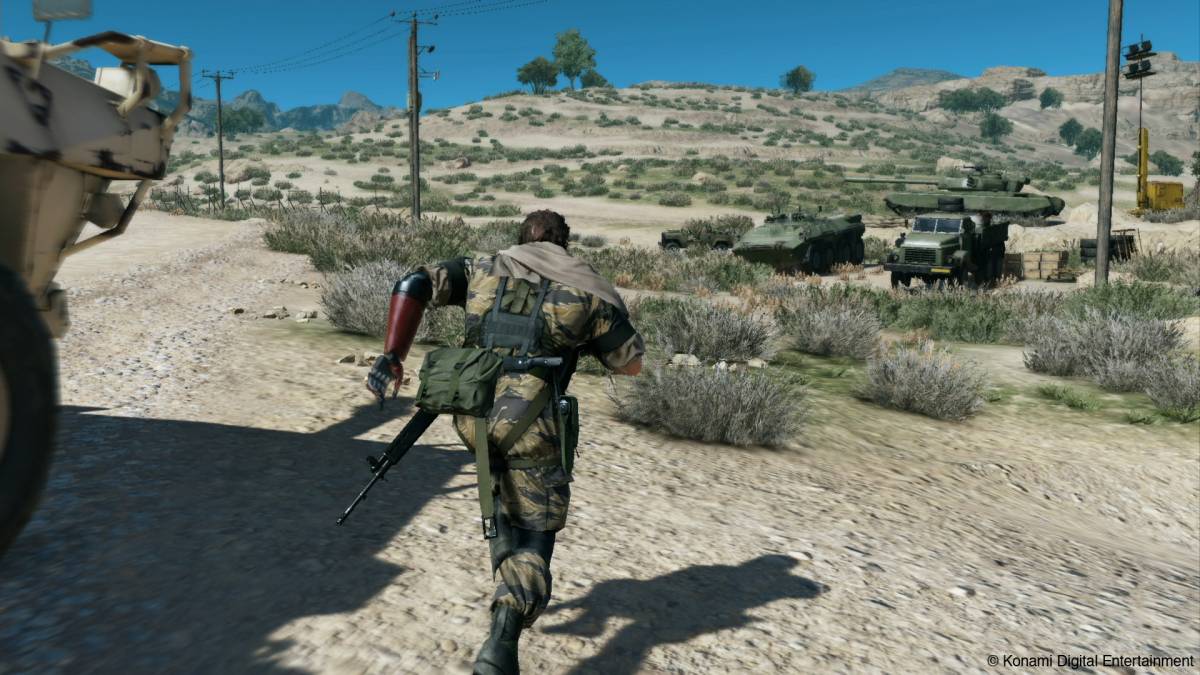 Something that remains consistent throughout the series is also how clumsy the controls can be and that’s sadly still the case here, although nothing that you can’t get used to after pulling a rocket launcher out on an enemy from two yards for the eighth time. The menu system is also quite confusing, even dozens of hours in, but these are really just minor quibbles.

Graphically, The Phantom Pain is right up there with some of the greatest looking games of the year; admirable considering how much more effort it must be when dealing with an open-world. Rainfall looks absolutely sumptuous and the environments in general are almost flawless. I was taken aback during the prologue sequence when I noticed that I could see the muscles in Snake’s back move as he crawled along the floor – the kind of attention to detail which Konami will miss if they decide to continue the series without Kojima.

[Tweet “”Graphically, The Phantom Pain is right up there with some of the greatest looking games of the year””]

Plenty of criticisms were given regarding MGS V‘s supporting character that walked around wearing only a bikini top, fishnet tights and a thong. Going by the name of ‘Quiet’, she is an expert sniper that can be your “buddy”: one of several NPCs you can take with you out on a mission to give you some back-up. There’s also a horse, a one-eyed Direwolf called D-Dog and specialised Walker Gear; all of these add a unique quality to every combat situation as each has their distinct traits and qualities, though you might find yourself attached to the horse more because it’s a quicker way of getting ride. Even though it’s probably what them naughty blighters at Kojima Productions were insinuating with her design, you cannot ride Quiet. 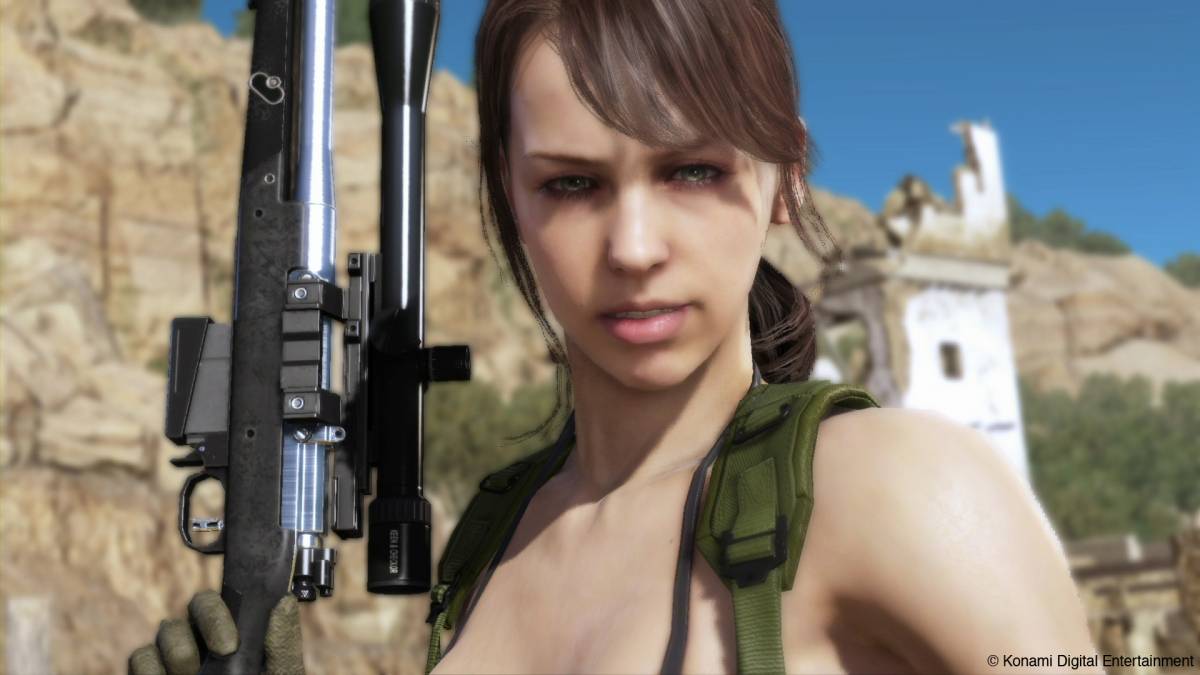 As mentioned, building your own private army plays a major part in The Phantom Pain and is a superbly satisfying cog in the overall engine of the game. After accumulating enough in-game currency, you can upgrade your resources to give you better weapons, attract more skilled volunteers to dispatch on special missions and also to increase the capabilities of your headquarters, Mother Base. This all combines to create an addictive and rewarding collectathon where you feel extremely satisfied to see your teams perform well and you unlock that slightly bigger rocket launcher. Microtransactions are available to fast-track some of your progress, but unless you’re really impatient, it isn’t compulsory – this is one of those rare instances where the much maligned business practice is handled fairly well.

Missions are handled expertly well throughout The Phantom Pain. Instead of throwing a hundred things at once at you to shoot your way through, you are given a lot of leeway in what it is you want to accomplish. If the story has left you breathless, you can take it down a notch and take on some side ops instead. These are all quite varied, ranging from hunting wild bears to saving prisoners from internment. 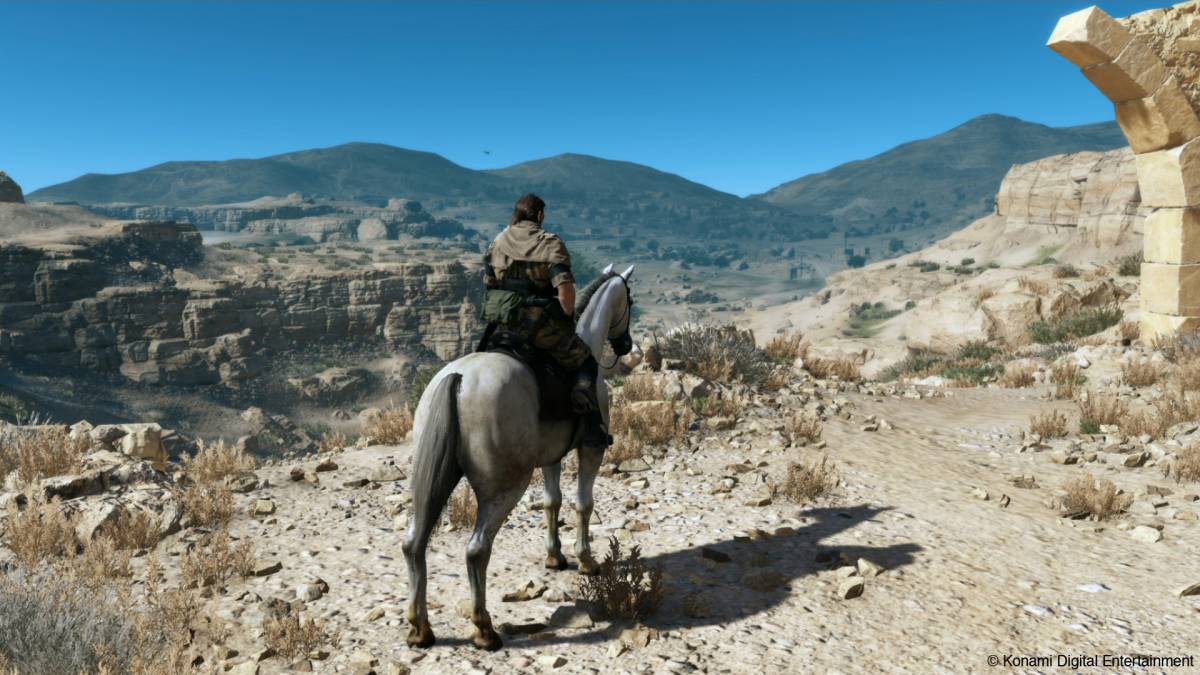 A lot was made of Kiefer Sutherland replacing David Hayter for the voice of Snake. Although he does have gravitas when he talks and the star power to go with it, he seldom actually does. Whether it’s because Sutherland cost too much money per line or not, it leads to some seriously strange sequences in which Snake doesn’t utter a word, almost making him look comically dumb. It was odd to replace Hayter for two final games after decades of solid work and Sutherland’s absence makes it seem even odder. Differentiating Kaz and Ocelot’s voice is also quite the challenge – Troy Baker doesn’t need every video game voiceover role ever.

My love for the series goes so deep that I was obsessive enough in my youth to download the Metal Gear Solid 2 soundtrack onto my MP3 player and listen to it religiously. Led by the masterful Harry Gregson-Williams, all of the scores for the MGS games have been wonderful and it’s the same here. ‘Quiet’s Theme’ in particular stands out as being haunting and strangely catchy at the same time. The music is stunning throughout, making all the motifs that much more ingrained in your mind long after you put the controller down.

As famed as MGS is, it’s most notoriously known for one thing: plots that are thicker than a bodybuilder’s thighs. Some decry it as indulgent storytelling, whereas people like myself just jump on for the ride into lunacy and never look back. The plot here is quite sparse compared to earlier games, striking a fine balance between keeping attention spans and not being too thin on the ground. To delve into more than I already have would be to spoil what’s a final hurrah from Hideo Kojima, though I will say that its ending leaves a lot to be desired, starting more chapters in the MGS canon than it closes. It is annoying that they roll credits before every mission, meaning you know exactly who will be involved and giving you a vague idea of how it will pan out.

Try as they might to hurry up the timer until self-implosion, Konami have to be applauded for investing in such a wildly ambitious, sensational game when it could have been too easy to leave it on ice. With Kojima’s much-publicised departure from the company, cracks within the company began to show, leading to a number of horror stories about their business practices and employee treatment. If it proves to be the last truly huge game that’s released under their lucrative banner before the CEO drives them out of the industry altogether, it’s a fitting farewell to those who grew up MGS, Castlevania, Silent Hill and more.

If you’re yet to experience Metal Gear Solid before now, you can still play through The Phantom Pain and keep your brain intact, but for the fullest experience, pick up the HD collection

and immerse yourself in its past first. The Phantom Pain is a game that will be talked about years from now as the centerpiece for one of the greatest series’ across any media and as a Hideo Kojima game through and through.