Fall Guys and the Joy of Failure

And why rolling a boulder up a hill isn't all bad. 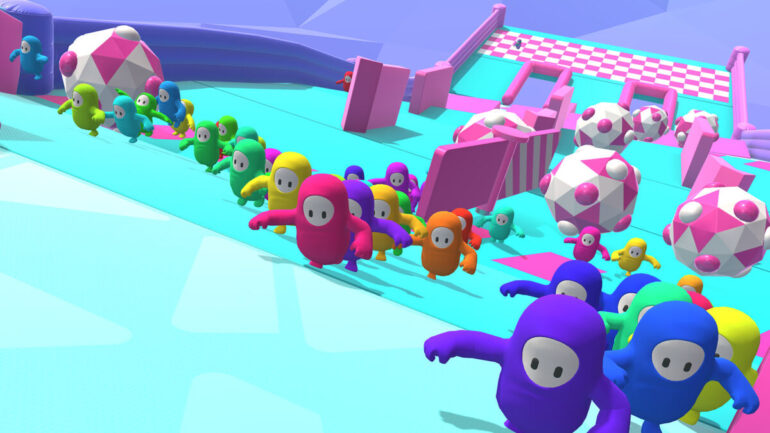 In Fall Guys: Ultimate Knockout, from Mediatonic and Devolver Digital, 60 players maneuver their jelly bean-shaped avatars through various obstacle courses and challenges, borrowing from game shows like Takeshi’s Castle and Double Dare. Some entire courses are made of see-saws, others are races where teams rush to push a giant ball towards the finish line. In all of them, failure is a frequent occurrence. This is by design, of course: Fall Guys is a Battle Royale game, designed to weed out players from round to round until only one little jelly bean stands victorious. But losing in Fall Guys isn’t a source of shame or frustration before hitting the button to go again — in Fall Guys, failure is where the fun comes from.

Unlike the previous stars of the genre (PlayerUnknown’s Battlegrounds, Fortnite, Apex Legends), Fall Guys doesn’t have any guns or combat in its gameplay. That’s not to say that it’s a non-violent game, though. In any round, your character is swiped by hammers, swatted by giant fans, rolled over by giant balls, and dropped off platforms ad infinitum— that’s what puts the “Fall” in the title. All of this is depicted with candy-coated colors and Looney Toons cartoon panache. This is what makes Fall Guys so exciting, and for some, so frustrating: to play Fall Guys is to not just accept, but embrace, the inevitability of failure.

Fall Guys accomplishes its fun in defeat in a few distinct ways, the first being the magic marker glow that coats every single object on-screen. The second is the feature that, after a player is eliminated, they have the choice to return to the lobby and start a new game, or they have the choice to stay on as a spectator to watch the chaos of the following rounds. Fall Guys doesn’t want you to spend all your time throwing yourself against its harsh, unforgiving rocks. It also wants you to watch other people throwing their bodies against the same rocks and admit that it’s funny.

For many other games, the loop of attempt and failure at this high a frequency can be frustrating, but Fall Guys asks us to find joy in the routine of failure. It might call to mind French philosopher Albert Camus’ 1955 essay “The Myth of Sisyphus,” which is about the absurdity of modern life and the repetitive nature of human existence: “The workman of today works every day in his life at the same tasks, and this fate is no less absurd. But it is tragic only at the rare moments when it becomes conscious.” Monotony and repetition can drive you mad, says Camus, but only if you let it. On the flipside, there’s a sense of purpose and absurd security that comes from getting in the flow state of repetition. Join a game. Fall off a rotating platform. Join another game. Fall through disappearing blocks. Join another game. Your team loses an egg-collecting mini-game in a landslide defeat.

And so on, until the end of time.

Through the lens of Camus, we might see Fall Guys as a meditation on the absurdity of any human endeavor, and how the frustrations of our existence aren’t necessarily anyone’s fault, but just a consequence of being born/choosing to play this game instead of Apex Legends. You’re here, and as long as you’re playing, you may as well do something with your time. Whether you win is immaterial, because winning is the destination. The majority of life is a journey, and in Fall Guys, that journey leads straight down.

Camus’ essay takes its name from the Sisyphus of Greek mythology, who is doomed to roll a stone up a hill every day only for it to roll down the hill at the day’s end, leading Sisyphus to try the whole futile enterprise again tomorrow. But for the existential dread of Sisyphus’ position, you can’t say he has nothing to do. He has a purpose and it seems insurmountable, but it’s his. And in Fall Guys, even if you manage to roll your little pill-person up that hill and reach the summit, the moment you boot up your next game, you are right back down at the bottom of that hill. And you get to play again! What a sense of purpose! In his essay, Camus summarizes his notion of self-determined purpose as such: “The struggle itself towards the heights is enough to fill a man’s heart. One must imagine Sisyphus happy.” In Fall Guys, this is especially true, because Sisyphus is wearing a funny pigeon costume.

While Camus might view Fall Guys as emblematic of life’s absurdity, J. Jack Halberstram’s The Queer Art of Failure, published in 2011, gives us another lens for the joy in wiping out in Fall Guys: Failure is, get this, actually good.

As anyone who’s ever played Dungeon World will tell you, failure is how you gain experience. When you do something and it doesn’t work, you now know, “Okay, this is not a successful thing to do.” The very phrase ‘Trial and Error’ tells us that experimentation leads to unsuccessful outcomes, but by rooting out these dead-ends we can slowly progress towards success. The problem is, modern society, and video games, want you to know failure is bad. Getting fired is frowned upon, and going bankrupt is majorly stigmatized. The words ‘GAME OVER,’ in huge font, accompanied by upsetting music, are meant to impress upon players how badly they have just screwed up, and that next time You Must Not Mess Up Again, Hero, Everyone’s Depending On You!

Again, Fall Guys jettisons all that. Failure isn’t just inevitable, it’s hilarious. Rube Goldberg machines of environmental hazards can knock players halfway across the map and out of bounds, and it’s glorious to behold. As Halberstam says, “Being taken seriously means missing out on the chance to be frivolous, promiscuous, and irrelevant.” Once we free ourselves from the need to be purely and entirely successful, and successful in a way that’s been approved by existing systems of power (e.g., not challenging a status quo), we are able to discover what we want ourselves to be, and we can explore our senses of self through failure. Do these pronouns work for me? Does this fashion sense make me feel fulfilled? No? Great! Now I know who I’m not.

The luxury of being, as Halberstam says, “frivolous, promiscuous, and irrelevant” gives our senses of self and our definitions of success malleability. While Fall Guys doesn’t give your avatar much room to be promiscuous (unless these jelly bean people are what you’re into, in which case, hey, love is love), but it absolutely revels in the realms of the frivolous and irrelevant. Fall Guys is not the epic combat of other Battle Royales, it doesn’t have lore or deep character backgrounds. It has silly costumes and mile-a-minute gameplay that hinges on the unwieldy physics of its world and the inherent comedy of bodies moving beyond their control.

And from this silliness comes growth. You do learn in Fall Guys. You learn strategies like hanging back and letting someone else be the first player to rush into a possibly fake door. You learn to watch your timing as you jump over a pinwheel-like obstacle. And you learn to let go of your gamer’s pride, because no matter what you do, a Fall Guy is going to Fall. As Halberstam says, “Rather than searching for ways around death and disappointment, the queer art of failure involves the acceptance of the finite, the embrace, of the absurd, the silly, and the hopelessly goofy. Rather than resisting endings and limits, let us instead revel in and cleave to all of our own inevitable fantastic failures.” That might as well be the design doc for Fall Guys.

Since you can’t rule out the high chance of failure in every round, you might as well embrace it. No one starts a game wanting to lose, but you know it’s a distinct possibility. Not only that, but when defeat descends, it’s funny and harmless, and it leaves the player with their dignity because everything about this Willy Wonka-looking world is so absurd, what’s the big deal that you didn’t jump on the tile with the correct picture of fruit? Another equally silly round is about to begin anyway. Just let go, let yourself look silly as you careen across the screen dressed as a cactus, and enjoy the glorious mess. You might learn something.

READ NEXT: Fall Guys’ Fall Ball Can, Quite Frankly, Burn