Fall Guys: Ultimate Knockout is a ridiculously good time and one of the standout titles of 2020. 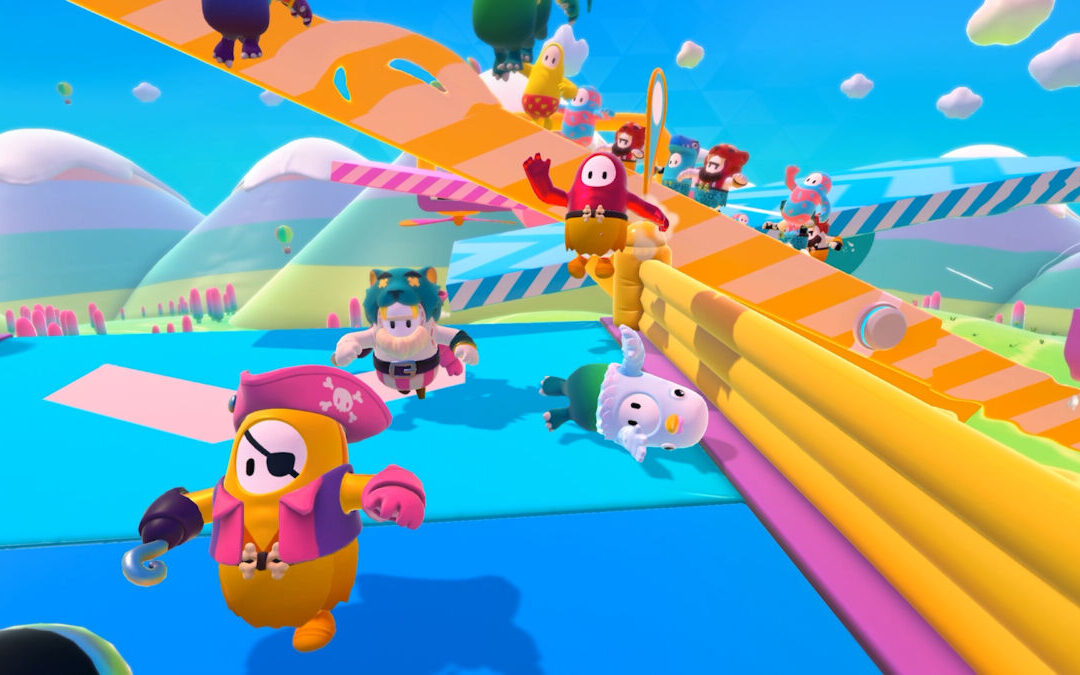 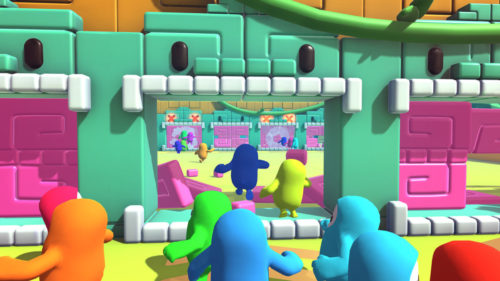 The timer counts down from three as I move my analog stick to sweep to my left and eye up the competition. A hotdog, a wolf, a pineapple. A veritable who’s who of Jelly Bean-people, all vying to navigate the wacky obstacle course ahead and qualify by any wobbly means necessary.

I’m in a full pigeon costume, controller gripped in hand and teeth-clenched, ready in mind, body and soul to make it to the next stage of the sugar rush version of Hunger Games.

This, of course, is Fall Guys: Ultimate Knockout – the latest gaming sensation to take over damn near every streaming platform in the past week. It recently accumulated a modest 2+ million players on Steam, as well as over 23+ million hours streamed on Twitch alone. It’s fair to say that people are quickly falling for Fall Guys and, frankly, it’s hard not to.

The premise of Fall Guys: Ultimate Knockout is simple enough: be the last Fall Guy standing and win the coveted crown. To do this, though, you must qualify through a number of solo and team based rounds to make it to the final. Sixty will start but only one Fall Guy can remain.

The courses are a frantic and frenetic mix of Takeshi’s Castle meets Total Wipeout, all blended into weird, wonderful and colourful Willy Wonka-style creations. In terms of controls, you run around with the analog stick while pressing X to jump, square to dive (after a jump, which, if used smartly can be an absolute saving grace) and R2 to grab. Grabbing, likewise to diving, can be used to tactically hamper another player or to grab items in certain rounds, as well as pulling yourself up to slightly higher platforms.

Like other ‘last man standing’ type games, Fall Guys also boasts a number of unlockables, costumes and ‘theatricals’ (effectively cute taunts by pressing a direction on the D-pad), achieved by earning in-game currency. The currency is earned by simply playing the game but also dictated by your personal performance throughout matches. There is also an option for microtransactions to purchase larger amounts of the currency but this is, of course, up to your own judgement. It’s also worth mentioning here that the costumes are entirely cosmetic and, wish as hard as you might, being a Raptor will offer you no advantages.

It’s a random selection of levels every time you play, so you’ll never have quite the same experience in two consecutive games. The levels can be categorised as on one three types: Race, Survival, or Team, with a Final Round to see out proceedings.

Microtransactions in Fall Guys take the form of Kudos packs, which can also be earned in-game. Prices start at £3.99/$4.99 and go all the way up to £39.99/$49.99. Kudos can be used to purchase costumes in the Item Shop. Crowns, another currency, can only be earned from winning a match or through season progress.

You’ll kick off with a Race level and may start with Dizzy Heights, which sees you navigating spinning platforms, bumpers and giant rolling balls, or See Saw, where, as the name implies, you need to cross a plethora of giant see-saws at the same time as 59 other players.

Survival Modes are just that – survive until a prerequisite amount of other Fall Guys have been eliminated. This may come in the form of Perfect Match, a memory-based game where you must avoid panic and recall where specific fruits are on the stages before a singular fruit appears on the screens around you. Failure to do so and going completely blank and weeping to yourself (as I often do) will result in you plummeting to the slime and heading back to the menu screen. There’s also Jump Club, where you must hop over (and stay under) two differently sized and paced beams that will otherwise yeet you straight off the platform and into the pink ooze below.

Lastly comes the Team Games, which present an altogether different beast. You will be randomly assigned to one of three or four teams (Blue, Red, Yellow and Green respectively) and have to work together to earn the most points or finish first, depending on the game at hand. This is something of an uphill battle, however, as with a game as frequently hectic as Fall Guys, it’s basically impossible to coordinate or form any semblance of strategy.

What you will usually find is that you and your colour coordinated cohorts will be dashing madly about the level, each doing your own thing until the timer expires and you find yourself surprised that you somehow qualified or disheartened that you understandably got eliminated. There is no inbetween.

The biggest offender for this is Fall Ball. We’ve already made our feelings clear on this round in a separate article but, in my experience, I have only won once in six games. I can’t put my finger on why I have struggled so much with this particular game, but seeing this one appear on screen at the random round selection screen always warrants a sigh. Witnessing any number of teammates wobble at two large footballs like toddlers pursuing a balloon quickly becomes a source of shame. Also, there’s something about having Pineapple Fall Guys on the team that you can never quite trust – I’m yet to encounter one that hasn’t somehow sabotaged the entire team’s efforts.

Other team games may see you fare better, with Hoopsey Daisy demanding your team dive through as many moving hoops as possible, and others like Egg Scramble and Hoarders seeing you charge out to collect as many eggs or balls back to you sector as you can before the time ticks down to zero.

It’s fair to say that so much of your success in Fall Guys: Ultimate Knockout comes down to luck. Sure, skill is a part of it, but plenty is based on the actions of your rival players as well as the next obstacle. In the two times I was able to grab the crown and stand tall as the victorious Fall Guy, I’d be dishonest if I had it down to my ability. In Fall Mountain, one of three possible finales you can experience, you must race to the top of the titular mountain, passing many hurdles and obstructions before literally jumping at and grabbing onto the giant crown. The only reason I won was because the other players ahead of me jumped and missed it.

This didn’t matter to me. The sheer euphoria I felt seeing my feathered avatar on that winners podium managed to dwarf the joy I felt with any Fortnite or Warzone royale victory before it. I think the luck element may just be why Fall Guys feels infinitely more addictive that any other ‘last man standing’ style game out there. It helps the appeal of the game tremendously because you don’t need to be Ninja or have some impossible level of streamer skill to stand a chance at winning, which is also why you’ll find yourself having ‘just one more game’ again and again and again.

My only major niggle with Fall Guys comes when playing with friends. Even though you will ultimately be racing against them, it can be difficult to identify where exactly they are on the level outside of a small white arrow above them. You can make player tags visible but, with all the kamikazeing bodies on screen at any given time, it doesn’t make it any easier to spot them.

Additionally, there can be some issues finding lobbies, but with Fall Guys still being in relative infancy at the time of writing (paired with its unprecedented success), this is entirely understandable. Hopefully they’ll also be able to put in place measures that stop some players from cheating going forward – here’s looking at you, random person who managed to stand on the edge of the level and breeze through to the next round in a game of Roll Out. I see you and I will have my vengeance.

Fall Guys: Ultimate Knockout is a fun, frustrating, colourful and addictive blast that separates itself from other last man standing games like Call of Duty: Warzone and Fortnite: Battle Royale — and all for the better. It’s as silly as it is compelling and you’ll have to tear yourself away to stop playing. Sure, being trampled by tens of other Bean-people can be tiresome as you watch the number of other Fall Guys who qualify in the top-right corner rack up but, honestly, the chaos is all part of the appeal. 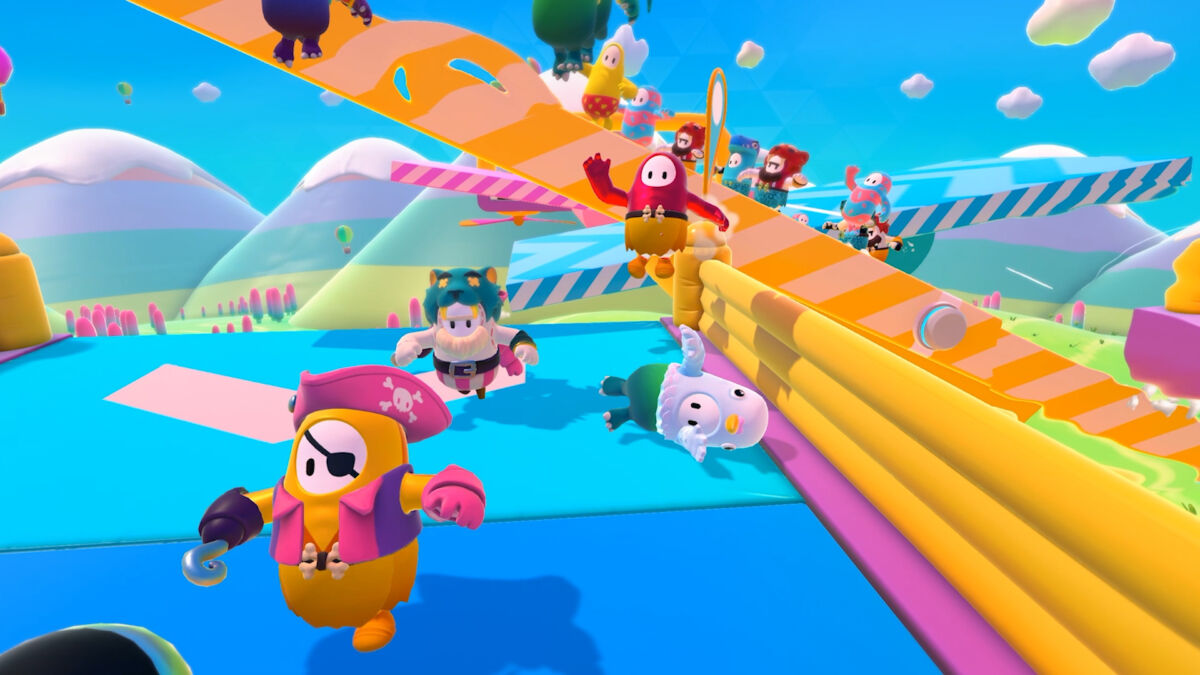 Verdict
One or two nitpicks aside, Fall Guys: Ultimate Knockout is a ridiculously good time and one of the standout titles of 2020.
8.5