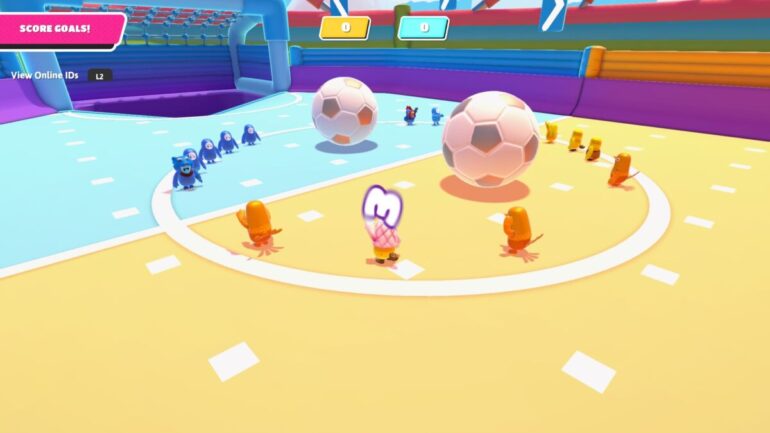 You probably know all about Fall Guys’ beloved brand of masochism by now, it reaching millions of players in a little under a week and being the talk of the town on places like Twitch. We need to talk about Fall Ball, though.

Fall Guys is a collection of mini-games that take the form of a game show with players being eliminated each round until only one stands tall. Well, tall-ish. These are beans we’re talking about. The mini-games are certainly varied, ranging from running across tilting platforms to strategically dashing across a hidden path with many more in-between and more still to come. It’s unlikely that you will encounter the same mini-games over and over within the same, likely pain-filled session.

They’re almost all fun in their own way — even the finicky nature of grabbing tails has its merits. Fall Ball, though, Fall Ball can burn.

A bean-based stand-in for Rocket League, Fall Ball asks two teams to try and score more goals than the other by leaping and jumping into giant balls. Sounds simple, and it really is, but Fall Ball has the potential to cause the most stress out of everything else in the game.

The first thing going against Fall Ball is that it’s a team game. I’m not one of those people who are asking for team games to be removed as they can actually be a huge amount of fun and spice things up, but Fall Ball feels like it’s the mini-game that comes down to how good your teammates are the most out of all of them.

And it’s clear that not a lot of Fall Guys players have played Rocket League, because there is just absolute chaos each round. I’ve watched my teammates happily trundle along, nudging the ball into our own goal without a care in the world. I’ve also seen the opposite team somehow have like four of their players at our goalmouth, basically suggesting the ball go into the goal through good vibes only. Meanwhile, my team can be found spinning in circles and constantly just eating shit.

Fall Ball also seems as dependent on luck as it does skill. There are so many different places the ball can travel to as the physics seem a tad wonky, you not often feeling like you’ve connected with it in a satisfying way. So many rounds of Fall Ball later and I still feel like it’s quite inconsistent, like there’s a missing heft to hitting the ball.

In Rocket League, you can easily catch up to a loose ball and get it back on track, but as the beans in Fall Guys are 90% gelatin and understandably not all that athletic, you just watch and withhold the screams as they plod along to handle an unfortunate ricochet. Spoiler alert: their tiny legs are not up to it.

Don’t get me wrong, Fall Ball has its moments of joy (evidenced by Manchester City’s Sergio Aguero) and, yes, not all mini-games in the game are supposed to be “fair”, but Fall Ball is a wacky roulette that can undo a great run, leading to totally helpless heartbreak over what could have been, and there’s sometimes nothing you can do about it.

Having said all that, though, I’m an Everton fan so I should probably be used to utter disappointment on a football pitch by now.

READ NEXT: Fortnite Has Way, Way Too Many Ads & Brand Deals