Once again it's time for us to revisit Boomtown, and this time things have taken a strange turn. 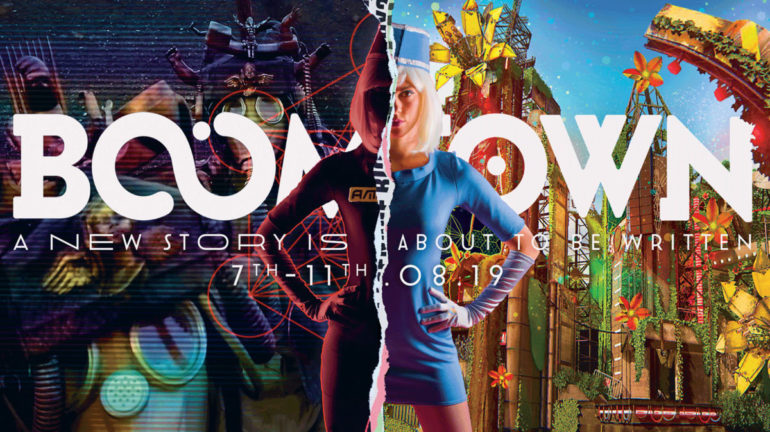 There are few things in this world more daunting than the reset button. It has to be clearly labelled, made difficult to reach and surrounding by scary red warning symbols, and pushing it is not something you do lightly. The denizens of Boomtown didn’t really get a say in the matter.

Last year, Bang Hai Industries had their machinations laid bare as their AI creation AMI revealed that they had hoodwinked the entire town – orchestrating a revolution in order to enact a corporate level takeover of the UK’s maddest city, and then utilising a market crash to rebrand it in their own image. Now BHI is in tatters, the slate has been wiped clean and AMI has started to spread her influence across Boomtown, learning as she grows.

Cultured Vultures started reporting on Boomtown just before the bogus revolution in 2016, to the point now when I’ve come to expect some level of contact shortly before the event. This year though things were eerily quiet for too long. I’d almost given up when all of a sudden I received an email from within the city, and then four more.

One was addressed from the office of one Gordon Romance, CEO of a tech startup called OneCor. A second email came from a lifestyle guru calling himself Mr. Bliss. The third was an invite to an event at the Villa Avarice, which was swiftly followed by a prospectus from an academy called Ivory Towers. The last, most perplexing message came via Twitter, an account called ISawTheLastTree. The message itself just said “Gaze upon her works”, and led me to examining a string of similarly cryptic messages from the same account. At this point I was so over encumbered with invitations I felt as though I was about to short circuit, and then my laptop did.

Less than a day after the message from ISawTheLastTree, my email account locked, and every url I typed in sent me to the same webpage, which was completely black, save for a logo in the top corner; the infamous insignia of the underground hackers of Boomtown. Eventually, the page revealed a short message “Com3 and s33 th3 truth, d3sp3rado”. The hackers had never contacted me directly before, so I decided to throw caution to the wind and venture back to the city, mere days ahead of the festival to see what had been going on.

I decided to start with the Daily Rag. The newspaper had always been a faithful locus of the town’s mindset in the past, so I figured I could pick their brains about what had been going on the in past 12 months and maybe get some insider information about all these new movers and shakers trying to stake their claim on the city. The walk through Paradise Heights didn’t give much away about drastic changes, it was as affluent as ever, seemingly unaffected by the departure of BHI.

I arrived in the offices of the Daily Rag to a maelstrom of chaos as they all bustled around, muscling for desk space in the cramped room. After being redirected between four different people (all named Sandra, which seems impossible), I finally found myself sat in front of Rob Boggins, the editor-in-chief of the Rag.

“We’ve been trying to get you in a room for four years, finally the prodigal son returns.” He said, somewhat sarcastically, while chewing the tip of his pencil.

I explained the influx of contact to him, and he didn’t seem in the least bit surprised. He informed me of the stories coming out of the mysterious Area 404, the organisational shake-up happening in Boomtown’s police department and the abject chaos gripping the Job Centre. Fascinating stuff all, but what was at the centre of it all? What was causing all this?

“I don’t have any straight answers for you, all the big players seem to be co-conspiring, it’s like they know something we don’t.” He sighed. “Some advise: I wouldn’t waste any time on Mr. Bliss or Gordon Romance, they’ll only try and use you as a source of endorsement. Just follow your instincts, like you’ve always done, and see where they lead you.”

After this brief meeting, I was unceremoniously bundled out. As I was leaving, a dishevelled looking figure hidden under a heavy coat brushed past me. On the coat, a circle made out of numbers was repeatedly scrawled. I got just enough time to sneakily snap a picture and copy the numbers down – 4363747135. I’ve looked at it several times since but can’t figure out a pattern. That was just the tip of the iceberg though, the real stuff kicked off after I left.

On the advice of a few locals I made my way down through Metropolis, bound for the Relic, the structure that stands on the wrecked foundations of Bang Hai’s old obelisk. I didn’t make it that far though. Metropolis had changed drastically, the turn-of-the-century regalia was almost impossible to trace beneath all the new OneCore branded facades which had been erected. The bizarre start-up had taken up residence in a big way, and it didn’t take long for one of them to recognise me and insist on taking me to HQ for an impromptu audience with Gordon Romance.

There are a few different ways I could describe Romance’s office to clear the picture up for you but I think one thing tells you everything you need to know – eight beanbags. Eight. Fucking. Beanbags. Just to be difficult I sat across three of them waiting for Romance to uncouple himself from his headset long enough to address me. Something tells me the 45-minute call was all posturing – I was being reprimanded for ignoring his email.

“Mr. Davies!” He finally said. “You’re a hard man to reach, plenty of time for old money and fake revolutionaries but none for me? I’m hurt” Something about his demeanour made me feel vaguely unwell.

“Where to begin? We’ve been very busy over the past year developing solutions for a new, progressive Boomtown. We have brand ambassadors across all social media platforms and our R&D team are working on things which nobody else in the world is doing. I can show you, if you’ll indulge me.”

I reluctantly accepted, and was frog marched into a room designed to showcase the Colonetics brand. After a lengthy introductory video, I was them shown a series of ‘Biome samples’ taken out of a cryogenic freezer, in a demonstration of what appeared to be the art of extracting faecal samples from overachievers and selling them to everyone else. I snuck out the back door while Romance refilled his cucumber water.

Further downtown I found my way to the remains of the old Bang Hai Tower, but remains is absolutely the wrong term. The building was alive with plants, a strange mutation of the sky-gardens of Singapore and the mutated gardens from the film Annihilation, at once captivating and disturbing. On the central screen, AMI flashed in and out of focus, seemingly in a state of semi-stasis. While I was busy craning my neck, someone slipped a note into my hand and vanished before I could spot them, although it was fairly self-evident who it was. It read “Follow th3 wir3s, find the batt3ry.”

Sector 6 was all the way on the other side of town, so the mere act of trekking over revealed its own clues. The same three or four mysterious graff tags were plastered all over Dissorder Alley, which itself was crawling with Boomtown Bobbies, seemingly awaiting a riot of epic proportion. I crossed back through Paradise Heights as well, and saw a group of Mr. Bliss’s recruits meditating, and even a few students of Ivory Academy handing out literature. I kept my head down so I wouldn’t get spotted.

I would dearly love to tell you what has happened to Sector 6 (now referred to as the Nucleus by locals) but honestly, I have no idea, I never made it that far. Once I got within the inner limits of Area 404, I spotted a sickly orange glow creeping up over the horizon. In heading towards it I noticed that I was completely alone, right up until I got to the edge of the hillside, when I was tackled to the ground by someone in a gas-mask and makeshift body armour.

“It’s not safe!” They mumbled.

Despite my protests they dragged me to a nearby tree and frantically ordered me to leave and get as far away as I could. Before leaving though I pressed the mysterious stranger for more information.

“Something sinister is growing in there, there’s dark matter seeping into the groundwater. You should go, we don’t belong here anymore.”

Before I could respond, the cryptic messenger had run off, leaving me sat on the edges of the Psy Forest, none the wiser to what all this meant. I’ve been investigating the inner workings of Boomtown for four years, and every time there was always a sense of orchestration, some master planning underpinning everything. This time, that sense was gone, and in its place was something more pure, and yet insidious. While various upstarts have emerged, parts of the town have given way to nature, and somewhere beneath the earth something is stirring. Mere days from now, Boomtown will once again come alive with revellers. What comes next, I suppose, is up to them. See you in the city.