Enemies to lovers in a bakery? Yes, please. 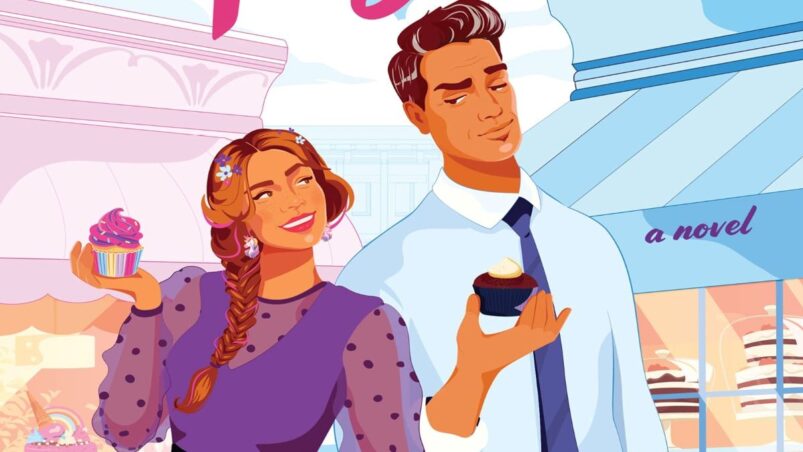 The weather in the UK might be a bit rubbish right now – August, we would like some sun please – and a lot of people aren’t going to make it to a beach this year anyway. But that doesn’t mean that we can’t still curl up with a beach-appropriate read and pretend that it’s still summer. Right? Right? In other years, Lucy Parker’s latest romance, Battle Royal, would be the perfect book to throw in your suitcase for your holiday. Luckily, you don’t need the sand or the sea to enjoy this absolutely delicious, rather grown-up romance.

Sylvie Fairchild made her name when she appeared on the popular baking show, Operation Cake. Everyone loved her, except for resident mean judge Dominic De Vere. When Sylvie was voted off following a unicorn related disaster, she and her best friend opened a bakery in London – Sugar Fair – which just happens to sit right across the road from Dominic De Vere’s super fancy bakery. Four years later, Sylvie is invited to be a judge on Operation Cake, much to Dominic’s disgust. And Sugar Fair is up for a contract to make the cake at the hottest royal wedding of the year, as is De Vere’s bakery. Sparks are going to fly – and they do.

Everything about Battle Royal seems, on first appearance, to be very light and frothy. The candy-jewel tones of the front cover, battling bakeries, Operation Cake – it all seems very light-hearted. And in many ways, it is a light-hearted story. Sylvie has a wicked sense of humour, sharp and whip-smart. Dominic holds his own with his quips and put-downs, and the supporting cast of characters are a riot too; Mabel, Sylvie’s assistant, and Pet, Dominic’s little sister, are particular highlights. There is so much talk of cakes and chocolate and sweets that you might go into a sugar coma just reading some of Parker’s sumptuous descriptions. Whatever is in the Midnight Elixir drink, I want to try it.

But there is also a serious weight to this story that makes it more than just a light-hearted beach read. Enemies to lovers is a fun trope, and Parker really enjoys herself with it here in the first few chapters of the book. Paul Hollywood has nothing on how mean Dominic can be to the contestants on the show, but Sylvie always stood up to him and he’s never forgotten it. Parker really knows how to create conflict that is both delightful to read and difficult to predict.

She is also really great at characters with depth, and it is those depths that make this such a compelling read, far beyond the fun of Operation Cake or a royal wedding. Dominic is genuinely a bit of an ass, and although it’s sort of a persona for the cameras, we soon learn that he is a man nursing some very deep and painful scars, which make him difficult to get close to. His relationship with his sister is difficult and strained, but not for lack of trying on both their parts. They just struggle to speak to one another in the ways that they want to. It feels very real, in a way that leading men in stories like this can sometimes not feel particularly real.

Sylvie is dealing with her own issues; she manages them a lot better than Dominic does, and knows how to surround herself with friends, but she is lonely too, alienated in a world where family is lauded as the most important thing. It’s a very millennial thing, to feel this sense of isolation when the world is moving fast around you, and my heart ached for Sylvie. It really did.

READ NEXT: The Best Kindle Unlimited Books You Should Read