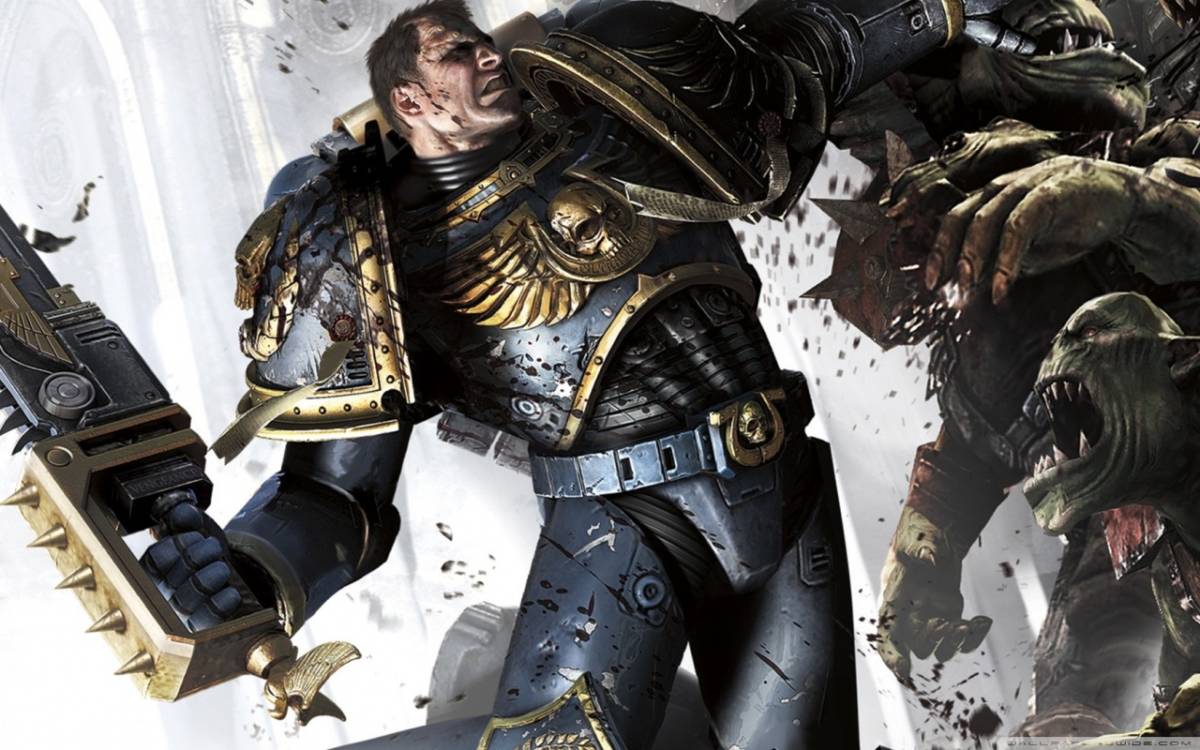 For many years, Games Workshop held tight to its license and there were very few video game adaptations of their universes. Recently, they have gone through some restructuring and after this the floodgates were opened. Now it seems there is a new Warhammer game coming out every week and finding good ones, let alone the best ones, can be a hassle.

Here is a list of the best Warhammer 40K games that have been released so far. The list is in no particular order and features both new and older titles.

Leading up to its release, Dawn of War II was watched by concerned eyes. It seemed to seriously reduce the number of units available and focus more on heroes than army composition. By the time Relic was finished with DoW I, it had seen almost all the factions represented and some of the most massive units grace the battlefields. Strategy nerds were dry heaving and muttering obscenities about Warcraft 3 when Relic Entertainment presented their vision for the next game. The concern that DoW would dumb down the gameplay and let the strategy suffer was palpable at the time.

Time proved Relic Entertainment right, however. DoW II offers a tight campaign with plenty of strategic choices, such as positioning and load outs for your troops. It also fits the Warhammer fiction better, as single Space Marines should be able to defeat armies single-handedly. The most hardcore of hardcore fans still dismissed it and that in part led to the Frankenstein’s monster of game design we saw in DoW 3. With loot drops, upgradeable units and a surprisingly captivating story DoW II is a classic we can come back to over and over again. The expansions are not as wide ranging as those for DoW I but are still pretty great.

In the grimdark year of 1998, there was only Warhammer XCOM, and something about a guy named Freeman. Chaos Gate is one of those games that I remember fondly from my childhood, it was brutally hard and did not hold your hand in any way. As with all childhood games, you have to be cautious, so it is not only the rosy light of nostalgia that makes you remember them. Chaos Gate, however, is a strategy game that passes such tests. For the longest time it was a real pain to get it running on modern machines and you needed a Virtual Machine with Win98 to get it going. Nowadays, it is available on GOG and should be pretty easy to set up.

As mentioned above, it is a tactical strategy game in the vein of XCOM. By modern standards, the controls and UI are a bit clunky and the graphics are, well, 1998 graphics that hold up ok in images but don’t animate that well. The strength of Chaos Gate is its attention to detail: you can equip all kinds of ammo, grenades and Power Fists on your Space Marines, Terminators or your vehicles. This, together with destructible environments, lends itself to gameplay that promotes experimentation. Misses can hit other units behind or beside your target and exotic weapons like vortex grenades are as deadly as they are unpredictable.

If you can stand the cobwebs, Chaos Gate is a really fun and unforgiving game. I still have nightmares about those damn Khorne Berzerkers 20 years later.

Panzer Korps goes to the Armageddon system. In the rulebooks and 40k lore, Armageddon is a bit of a punching bag. Having suffered Chaos invasions and rebellions in the past, now it is the Greenskins that want a piece of the pie. Playing very similarly to the game Panzer Korps, you take control of the Imperial Guard stationed in the system to try and stem the green tide. To help even the odds, you gain access to both Adeptus Astartes and Adeptus Titanicus and some of the later battles are just massive and will really give your veteran troops something to chew on.

Armageddon might look like a simple time but manages to be a fairly deep wargame while not falling into the ditch of requiring players to read tomes of rules or watch hours of YouTube before having any fun. I am looking at you, Paradox, and you, Graviteam Tactics.

Unlike Panzer Korps that came before it, Armageddon has a story to tell between missions and you get to make some decisions on where to go next from time to time. The story isn’t perfect, but it does its job well enough to keep you motivated and touches on some themes seldom seen in Warhammer today, like how corrupt the Empire is and so on. Armageddon really explores the Warhammer license with hundreds of units at your disposal, from cavalry that does little besides getting moved down to massive Titans that stomp around the battlefield. It also has a really good iPad port for those of you who like a good strategy game on the go.

Ironically, this Warhammer 40,000 space strategy romp is one of the best age of sail strategy games I have ever played. It’s all about turning around for broadsides, crossing the T and burning fuel to get up to ramming speed. This doesn’t diminish its appeal, on the contrary, by keeping it simple and on one plane, Battlefleet Gothic becomes a memorable game.

Taking place in the Gothic sector, you must foil the plans of main Chaos mischief maker Abaddon the Despoiler and his ambitions on yet another Dark Crusade. Apart from the forces of Chaos, you also get to fire your cannons at Ork pirates, Eldars and the occasional heretic in the story mode. Additionally, there is also a decent mini campaign mode for almost all factions, which doesn’t have any story but randomly generates missions for you.

Your crew gain experience and you can outfit your colossal ships with new gear as you finish missions and it has that slow plodding gravity you want 40K battles to have. The only negative thing to say about Gothic is that the battle size can feel too restrictive at times and you seldom get the chance to field a big fleet.

Space Marine is a surprisingly well made and fun action game in the vein of Gears of War. You control a captain of the titular order as you fight to rid a planet of the green menace. Space Marine features a robust shooting mechanic married with a fast and brutal melee system that really makes you feel like one of the invincible Sons of The Emperor. It is a game that does a great job of illustrating the universe that the Warhammer games inhabit, like the scale of its weapons and how massive the Space Marines really are compared to regular humans. As you hack, shoot and maul your way through the hordes of the Greenskins, you get to play with Plasma Cannons, Thunder Hammers, Heavy Bolters and Chainswords so there is a lot of variation and fun to be had with the weapons as well.

The story is for the most part pretty standard, although as it is narrated by Mark Strong, it has a certain gravity that most 40K games lack. It also does something that is very rare for Warhammer these days: it shows you how bad the Empire is. Back in the day, it was pretty clear that the Space Marines and the Empire were to be taken as satire, criticizing fascism, religion and militarism. As Warhammer gained popularity though, those themes became pushed further and further back in favor of just pure action. Space Marine at least has enough twists and an ending that nods towards this mostly forgotten origin.

Great action and voicework together with a decent story and, at the time, active and fun multiplayer makes Space Marine a must on this list. I only hope Relic Entertainment have a chance to do a sequel one of these days.

Do you like to turn down the tempo a smidge and focus a bit more on strategy and tactics in your Warhammer 40,000 action games? Then you should definitely check out Space Hulk: Deathwing.

Playing as terminators, you are on a mission to cleanse a gigantic ship that has been lost in the warp since the days of the Great Crusade. To help you out in this endeavor, you have access to all the goodies you expect when battling the fearsome Genestealers that infest the derelict ship: Thunder Hammers, Autocannons and psychic abilities are all at your disposal in the campaign. Everything in Space Hulk: Deathwing has a certain weight to it; stomping around on groaning metal walkways, punching through brick walls or turning on the heat with a Plasma Cannon just feels great.

Co-op is where Space Hulk really shines through, playing like an improved Left 4 Dead, the dark corridors and gothic cathedrals will be bathed in fire from your Heavy Bolters and Plasma Canons. A few technical blemishes aside, like dodgy AI, this game is an excellent choice if you like playing with friends.

Being a bit of a granddaddy of Warhammer PC games, Final Liberation’s take on strategy still holds up surprisingly well. Using the Warhammer Epic license, you control much larger forces and gain access to some of the biggest machines that have ever been created in Warhammer 40000, massive Titans will duke it out across a battlefield full of Earthshakers, Baneblades, Ultramarines and other military hardware.

Graphically, it doesn’t have much to offer anymore but since it was made before 3D, it’s still looking decent for such an old game. The biggest hurdle is the UI and it will take some getting used to today. If you can tolerate a bit of the old design though, you will have a great entry into the pantheon of Warhammer strategy games and pretty much the only Epic 40,000 game out there.

Featuring 90s FMV and an awesome soundtrack, Final Liberation is a game well worth revisiting if you can get your hands on it.

One To Avoid: Warhammer 40,000: Eternal Crusade

It really shows that this was saved from the ruins of an unreleased MMORPG. The combat is incredibly sluggish and none of the weapons or vehicles feel any good at all. The most frustrating thing is that it evokes Space Marine but while that one was snappy, fast and brutal, Eternal Crusade feels like you are trudging through mud and shooting peashooters all the time.

Even if it is free, Eternal Crusade is not worth your bandwidth and I see it as a duty to steer anyone who comes seeking a grim and dark future to play games in away from this pile of sadness and disappointment.