25 Years Ago, Lisa Needed Braces And The Simpsons Tackled Unions 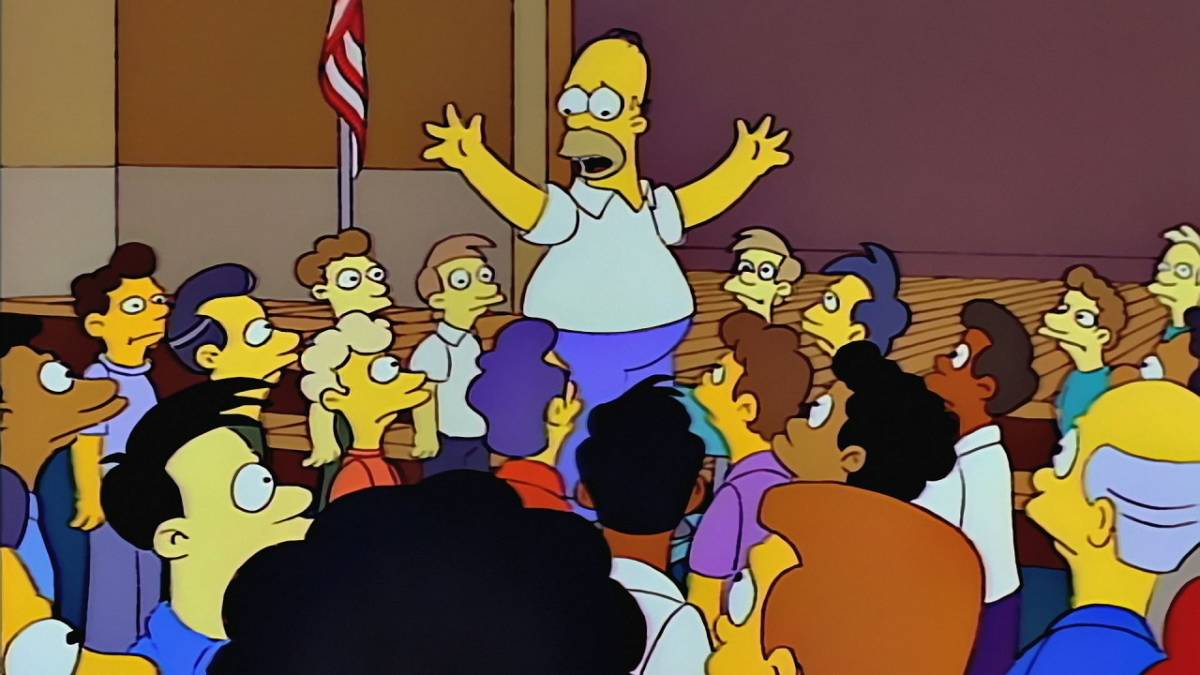 This weekend will mark 25 years since those granulated clouds parted, and we were gifted with ‘Last Exit to Springfield’, one of the greatest episodes of The Simpsons.

Beginning with a killer McBain sketch that time has only made funnier (“Swank! Ten times more addictive than marijuana!”), the episode features such a high-carat amount of cultural references that it still stands out, even after 29 seasons of the show.

This gem of a journey into Springfield is located at the heart of a particularly rich seam of comedy gold known as Season 4 of The Simpsons. Veteran writer Bill Oakley, who had just joined the writing team for that season, has bluntly recounted the team’s lofty goal as being “to copy” the previous batch of episodes. It was a noble goal, with the writer having earnestly pointed out that the previous season “was the best season of any TV show of all time”.

Oakley and the spruced-up writing team somehow managed to equal the quality of the show’s third season by perfecting the formula of a simple family dilemma (Lisa’s need for braces, and Mr Burn’s plan to strip his employees of their dental health benefits), which is then trimmed of all fat and studded with signposts to high and low culture.

With the episode’s title also being an homage to Hubert Selby Jr.’s ‘Last Exit to Brooklyn’, the episode pulled a comedic backflip that prime-era The Simpsons excelled at; producing a side-splitting episode from inspiration as deeply disturbing at the ‘Strike’ chapter of Selby Jr.’s novel.

Union membership get a battering and then a redemptive filter on ‘Last Exit to Springfield’, as the feckless Springfield members of the International Brotherhood of Jazz Dancers, Pastry Chefs and Nuclear Technicians almost trade away their dental plan for a keg of beer. Only Homer’s self-interest (“I’ll have to pay for Lisa’s braces!”) changes things, thanks to the famous “Lisa needs braces / dental plan!” mantra (more on that later).

If you come across this episode as a rerun today, at a time when both UK and US union membership is at an all-time low, the representation of all these characters being unionized (as a matter of course) may jar with the workplaces many of us work in of today. With the union-muzzling Janus vs AFSCME now looming in Trump’s America (“the biggest labor case of the century” according to the Washington Post), this episode offers a cultural perspective on how the working world of the west really has shifted.

But all’s fair game in comedy; considering Homer got his plant job with almost zero qualifications, the fish-out-of-water possibilities of making him labour figurehead was too promising. When US conservative outlets like the National Review wheel out dingers in 2018 like “there are few bigger bullies in everyday American life than the union boss”, it’s tempting to think Homer was all set to perpetuate this caricature.

What’s ultimately endearing about the episode is how Homer intends to cash in on this role (“Mmm, organized crime”), but never gets a chance to. The references soon go into overdrive, as the show quickly introduces us to Don Homer, a Corleone-like figure who appreciates a “nice-a donut” in return for his power and influence. But this episode has too squishy a heart to really drop him in the dirt.

The freestyling we see when Homer is actually forced to perform in the role is the show at its absolute best. The Simpsons has successfully mined Homer’s attitude towards his own sexuality many times over the years (most notably in ‘Homer’s Phobia’), but this early example of him misunderstanding Mr Burns’s intentions is textbook confusion comedy. Even without the running interior monologue, the tiny ‘Hmm!’ of disappointment that Burns lets loose works perfectly in both legitimizing Homer’s misunderstanding, and in portraying Burns’s misguided perception of him as a “master tactician”.

It’s tempting to look at that short but hilarious exchange as The Simpsons writers referencing the homosexual themes of Harry in Last Exit to Brooklyn, but wisely steering clear of the horrific aspects of abuse and violence that permeated that character in the novel. With a light touch, the episode pulls uplifting comedy out of the hat, regardless of the source.

Meanwhile, we can see where the writers were determined to repeat the winning aspects of the previous season. One of the strongest episodes of Season 3 was ‘Burns Verkaufen der Kraftwerk’, the episode that most people know as the one where the Germans buy the power plant. This features one of the best sequences in the show’s history, where Homer prances through the fantastical Land of Chocolate. Given the praise the show got for that scene, Lisa’s psychedelic trip though the Yellow Submarine landscape (it’s decidedly purple here to avoid litigation) was a great example of the show could spread its wings even further into the surreal.

Funnily enough, rumour has it the writers had previously considered having the German investors in that particular episode be Japanese, or ‘those sandal-wearing goldfish tenders’ as Burns Sr. maligns them. The clear and persistent American fear of of being economically out-powered centers around the Japanese in this early 90s episode, with Germany playing the threat in the previous season. The current economic boogeyman, the Chinese, would clearly play that role today, as the country seemingly sleepwalks into a trade war with opponents, both real and imagined.

What allows ‘Last Exit to Springfield’ to shine brighter than competing episodes is how it nails references both contemporary and classic. While we have the clear Selby references, we also have a room full of monkeys being castigated for not getting Dickens quite right (“It was the best of times, it was the blurst of times?!”), while Burn’s grotesque cockatoo touches on both ‘Citizen Kane’ and ‘The Island of Doctor Moreau’.

Winningly, they don’t stop there. The show persists in machine-gunning (à la McBain) the popular likes of Tim Burton’s Batman (“The mirror!”), Ghostbusters (those fireman poles), and Star Trek II: The Wrath of Khan (which itself pinches the ‘From Hell’s Heart…’ quote from ‘Moby Dick’.). The final reference to The Grinch That Stole Christmas tops things off as a wholesome but insidiously catchy song redeems the union, and brings things back to the status quo.

Even with all that, a single aspect of this episode has seemingly floated above all the rest. If the episode has to stand out for one thing, in as few words as possible, it has to be the ‘Lisa Needs Braces / Dental Plan’ mantra. In an era when memes are now a real part of the culture wars, this circular soundbite still has a way to lodge itself in the brain. If you ever come across someone under 50 who doesn’t like (for some reason) the classic episodes of The Simpsons, they’ll still likely have heard of this. How’s that for viral?

That said, don’t waste any time melting your brain with the 10 hour versions of it on YouTube. Instead, put aside 23 minutes, and turn them into gold with this 25 year old slice of comedic genius.

If you’re truly not satisfied, this writer will trade you this delicious doorstop for your kind forgiveness.