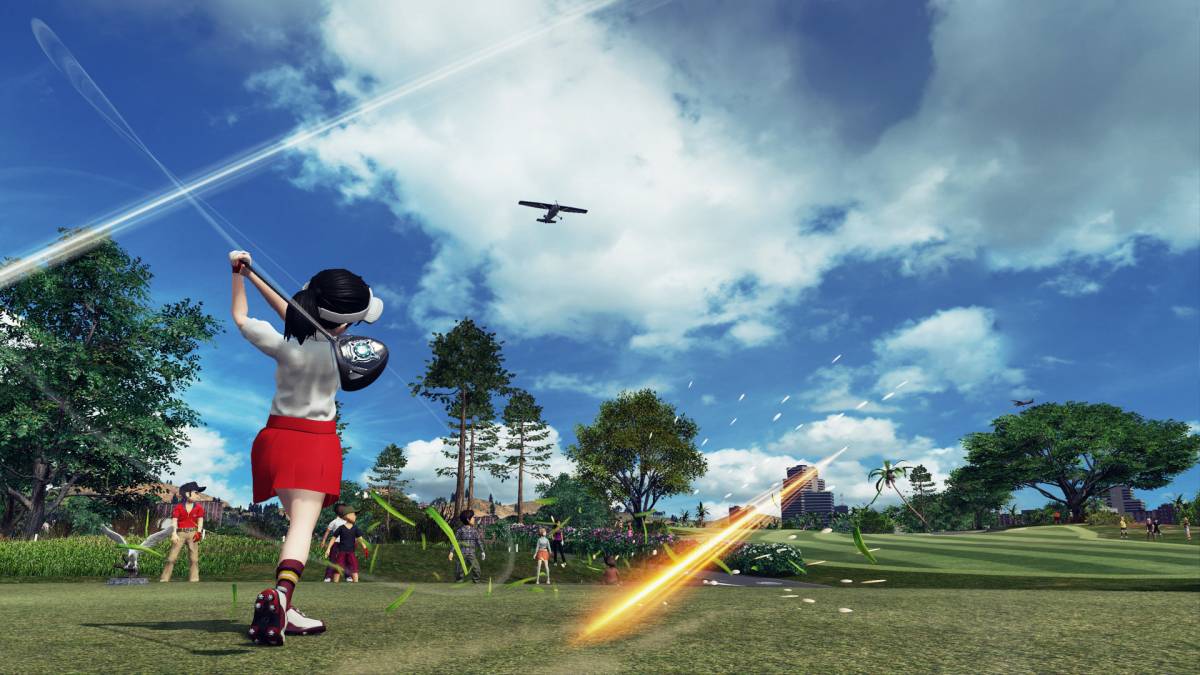 The Everybody’s Golf franchise has been a PlayStation mainstay ever since those halcyon days of the PS1, where people were more interested in counting polygons than frames per second. It was a simpler time, and one that Everybody’s Golf, or Hot Shots Golf in those distant foreign lands, had a big part of. One or more iterations of the game have appeared on every PlayStation console since its debut. Even the Vita got in on the action, shockingly.

I can’t speak for every household, but Casa Del Bates had a strong affinity for the Everybody’s Golf series. Oftentimes, Papa Bates would be playing the big boy version on PS2, while Pre-Adolescent Youngling Bates could be found clutching his PSP, getting hyped for that one specific time he nailed a hole-in-one. It was, and still might very well be, my crowning achievement in life.

But now it’s 2017, and Young Man Beardface Bates has a copy of Everybody’s Golf for the PS4, and this wave of nostalgia washes over me like a familiar breeze. Is the series still just as good as it was, or has this latest just hooked the ball out of bounds and scored itself a double bogey? 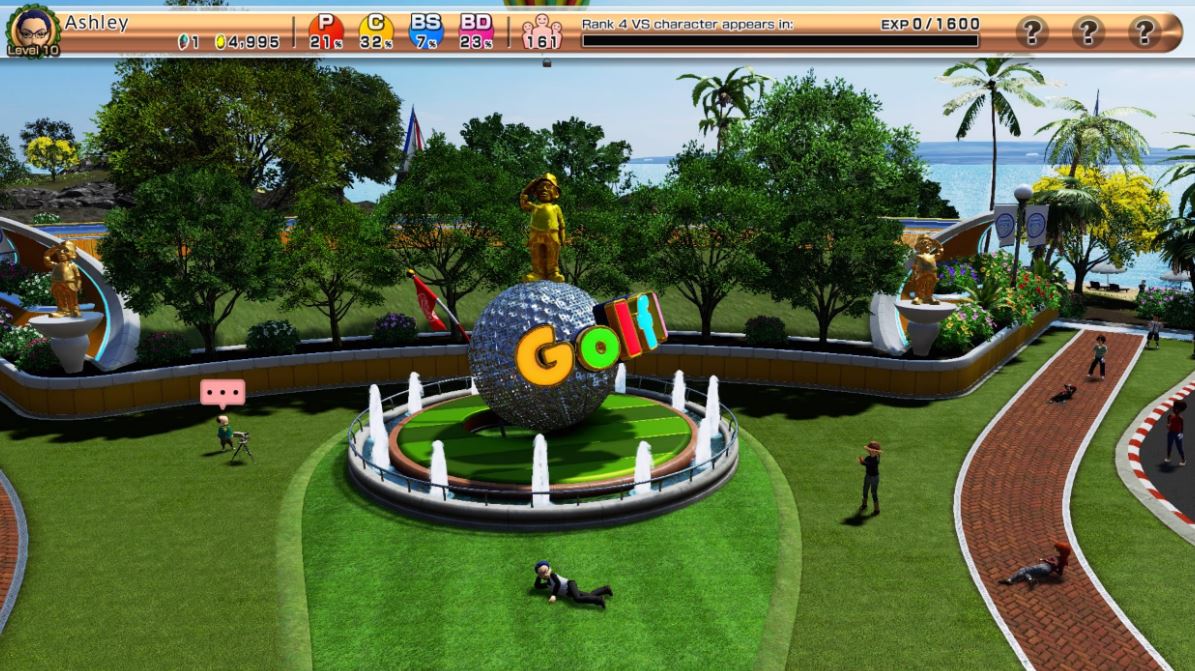 At its core, Everybody’s Golf still retains the same simple gameplay that made the game such an accessible hit in the first place. This is for everybody, after all. You press X to start your swing, press it again to set your power and one last time to determine how well you strike the ball. The last hit is the most crucial, as your timing will determine whether or not you’re going 300 yards down the fairway or 150 yards right into the window of a nearby condo. It’s the simplest system in the world, and it still works. Even after your 100th perfect tee shot, there’s still that sense of satisfaction that comes with it. It never gets old.

While those are the basics, more advanced players will be able to use the D-Pad to curve the ball around obstacles, or to apply backspin when they want to nail a close approach. Players can also utilise power shots to add a few yards of extra distance, which is especially useful on those long par 5s or short par 4s where you can make it to the green in one.

As it’s the same gameplay, long time players may get frustrated by the game’s insistence to hold your hand in the first couple of hours. It’s an understandable decision; by being called Everybody’s Golf, Clap Hanz Limited had to design the game to cater for both veterans and new time players. Still, you can’t help but feel like the game is being condescending when it’s telling you to do power shots despite you already mastering them. 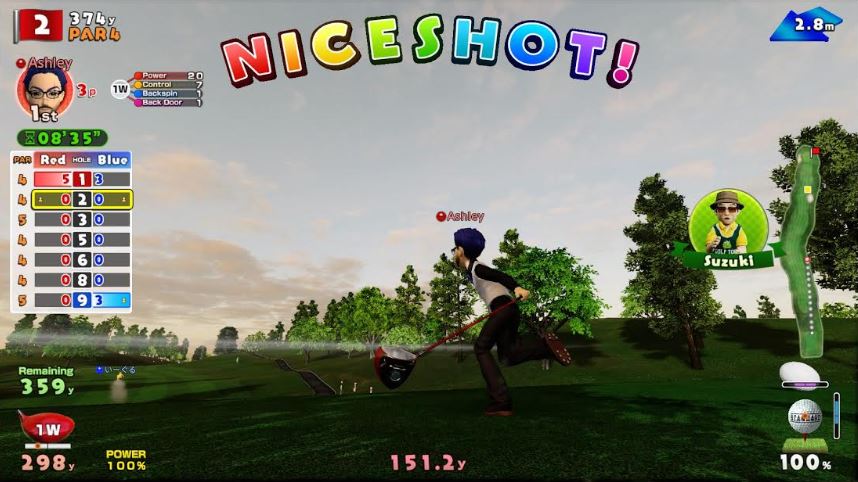 The gimmick for this version is the ability to level up your club individually. Most clubs are ranked on 4 stats: power, control, backspin and backdoor. The first 3 are fairly self-explanatory, as they determine your distance, accuracy and backspin, and can be levelled up by hitting long shots, close approaches and using backspin respectively. The backdoor ability governs the likelihood that the ball will sink when it circles the lip of the cup. Your putter can only gain EXP for it’s backdoor ability, and it’s useful for sinking long putts that might otherwise miss entirely.

The character creation tool is welcome one, and one that truly embodies that “Everybody” mantra. You want to be a suave blue haired anime husbando? You sure can. You want to cross-dress on the fairway? You can do that too. You want to wear a nurse’s outfit, just because? Of course you can. From freak to fashionista, all needs are catered for.

More clothing and customisation options are unlocked as you play through the tour mode, which consists of 9-18 hole stroke play games on courses that become increasingly harder as you progress, followed by VS battles against special opponents. Beating these players in either stroke or match play unlocks their gear and advances you further. Rinse and repeat until you become a golfing god. 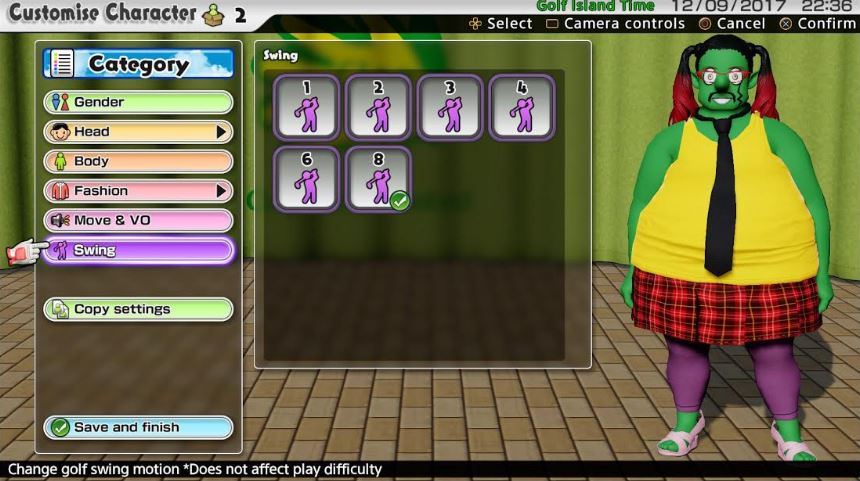 Events can be played in Serious Mode, which increases the skill of the AI but doubles your bonuses if you win. If it’s your first time trying a course, it’s not recommended to play this mode. They will consistently perform respectably whilst you’re sat at the tee, twatting the ball and hoping for the best.

Despite only having 5 courses available on launch, the amount of variables available for each course practically ensures a different challenge and ultimately a different round of golf every time you play. Your first go of the front 9 of course 2 could be an evening round on the long tees, accompanied by calm winds and the player friendly Mega Cups. Your second try, however, could be a stormy morning affair, with Tiny Cups and Mirror Mode enabled. Two completely different ways to play the same nine holes.

The online modes are where Everybody’s Golf displays a lot more of the cheeky personality that the series is known for. The Free Course mode allows dozens of players to share the same 9-hole course at the same time, which inevitably creates an entertaining backdrop unlike any other golf game available right now. 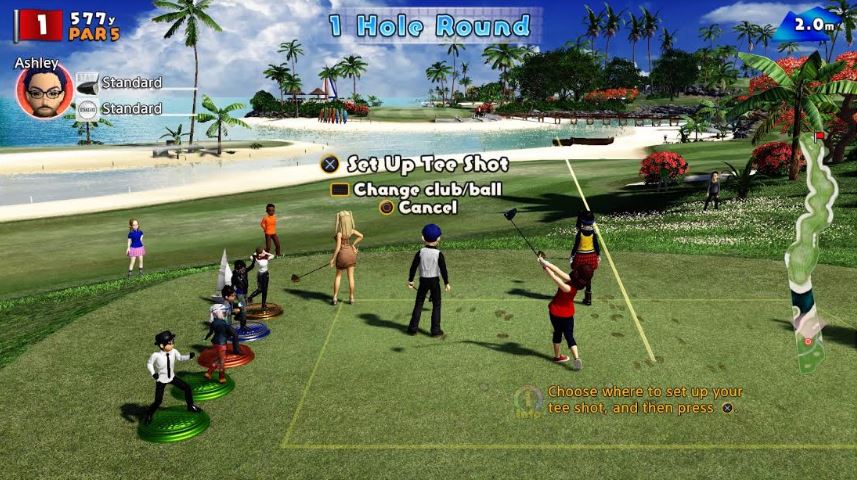 You could be lining up a birdie putt on the 18th hole, whilst 3 other players are applauding and cheering you on. Meanwhile, 2 others are sat by a nearby pond indulging in a spot of fishing whilst behind you, 3 other players have engaged in a golf cart demolition derby. Cleverly, none of this interferes with your game either. No need to worry about some troll punting your golf ball every time you land on the green.

This free course aspect comes into play with the game’s other online mode, Turf War. 20 players, 10 per team, are given 10 minutes to battle for control of a handful of holes by shooting low scores. The lower the score, the more points tour team earns on that hole. Whichever team has the most points wins the hole, and the team with the most holes wins the match.

There’s something to be said about witnessing the chaos of 15-20 players making a mad dash for the first hole and teeing off at once. It’s an innovative spin on the golf format that becomes surprisingly tense during the final minutes, as you race to finish your particular hole in time, though it’s equally frustrating when you’re playing a perfect round and half your team keep shanking their tee shots into the forest.

The issue with these modes is there is no real incentive to engage with these modes. Coins are good, sure, but they don’t equal progression.Whilst the fact they aren’t mandatory is good news for the unsociable, there’s no integration with the Tour Mode either. There shouldn’t be many reasons why completing a nine hole round in Free Course, or winning a game of Turf War doesn’t net you the valuable EXP required to reach the next level.

Sure, Clap Hanz might be trying to avoid players farming EXP on the easy course, with Mega Cups added for good measure, and instead want to encourage players to try new things. That’s respectable, absolutely, but as things stand right now, these modes exist purely as a novelty, and one that’ll wear off very quickly.

Ultimately, Everybody’s Golf is the same charming and rewarding golf experience it always has been, with enough simplicity to cater for beginners and enough depth for players who decide to master the game. Whilst the single player Tour Mode has a lot offer, the online options need bolstering further if the game is to truly succeed.

Verdict
It was the undisputed ruler of the golfing genre, and that crown remains unchallenged, but Everybody's Golf is one of few games that could benefit from better online integration.
7.5
Cultured Vultures is a pop culture website established in 2013 covering all things gaming, movies, and more. We eat your words.
All The News On Your Favourite Games