What Makes Resident Evil So Special?

Spooky, kooky, and altogether ooky, Resident Evil may well be the most beloved horror game ever. 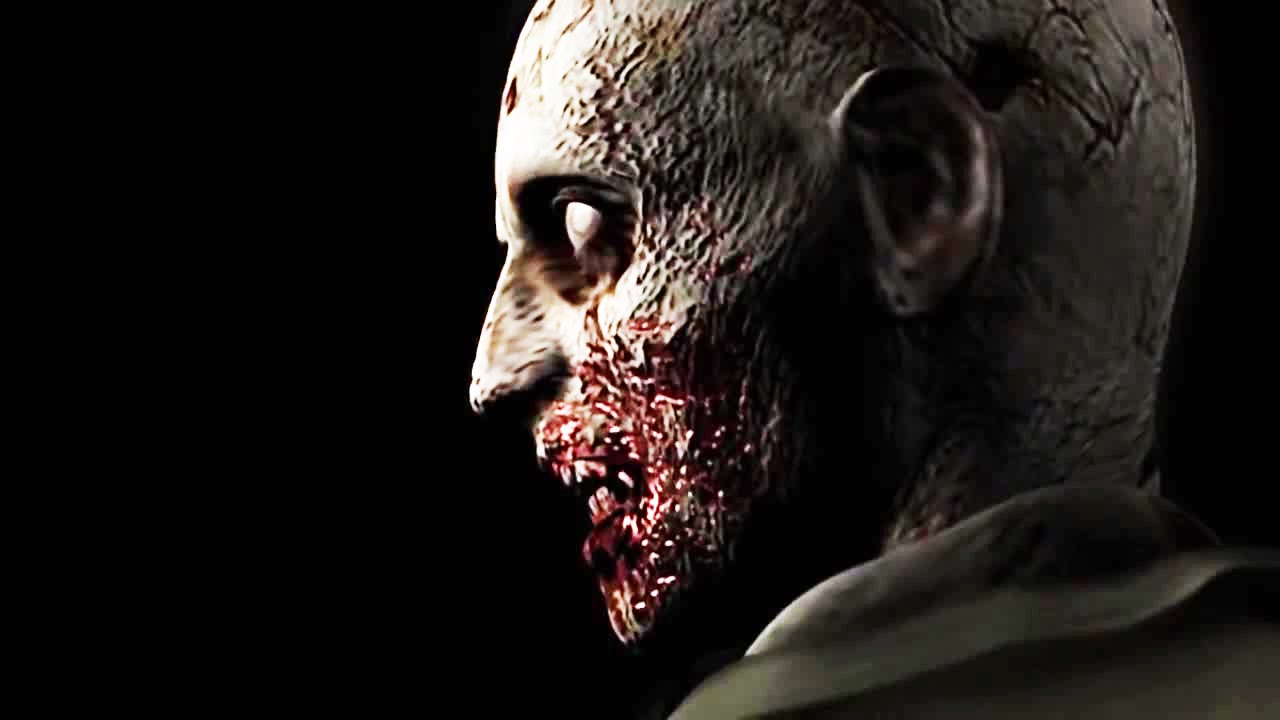 Resident Evil is beloved enough a franchise to still be going strong through five generations of consoles – and even that undersells it. Where most film adaptations of video games are released, underwhelm, and are forgotten about, Resi is a long-runner at the cinema too, with the first film released in 2002 and a reboot scheduled for later this year.

So what is it that makes Resident Evil quite so special? In a word, cheese. And I’m not talking about mild cheddar here. I am talking Stilton, that’s gone off, and which is delivering an atonal, floridly-worded soliloquy about taking over the world.

The first Resident Evil game – or ‘Biohazard’, in its ancestral homeland – quickly became infamous for its legendarily clunky voice acting. A line as simple as “don’t open that door!” could be rendered jarring and overwrought under Resi’s gentle care. Team bear Barry Burton got more than his fair share of these, including the immortal “Jill sandwich” line, mocked so thoroughly that the voice actor is now incredibly reluctant to comment on the role.

The actors, to be fair, clearly weren’t to blame. You can only work with what one is given, and presented with a script where every line is either stating the obvious or babbling out something silly, both worded in ways no living human would really speak, the performances they turned out were no less than appropriate.

But in terms of sheer clunk, the voice acting paled in comparison to the actual controls, usually described as tank-like, where you had to turn your character around before setting them off moving. This was alongside a fixed (and often awkwardly placed) camera, meaning that it was something of a struggle simply to move around and fight the zombies – that is, to play the game.

And the recurrent puzzle segments seemed to be layered onto an otherwise atmospheric game very clumsily. They weren’t much evolved beyond the old point-and-click games (which, to be fair, were a recent thing back then) where you had to interact with everything within arm’s reach to be sure you’d found everything important, and mostly boiled down to matching tab A to slot A – use the sword key to open the sword door, put the octagonal thing in the octagonal slot, play the sheet music to open the piano door.

(You can contrast this with the more mad-libs style of puzzles of Resi’s survival horror sibling Silent Hill – decipher three codes to open the box, inside is a human hair, use that to create a makeshift fishing line, and on like that.)

Compounding both these sides of the gameplay was the inventory system, with a hard limit of eight items – which may seem unbelievable compared to inventories of today, when you can simply pick things up until your character’s back gives out. This meant that doing anything involved a lot of backtracking. But – but that’s simple enough, right? Not in the world of Resident Evil, where going through a door involves cutting away to an animation of a door opening while it floats in an eerie black void.

This absurd, debatably-gameplay was laid against serious, gritty storylines involving secret conspiracies between state authorities and private companies, and thoroughly unethical biological experiments. With this backdrop, Resident Evil could quite easily have been bleak and no-nonsense throughout. Instead, as we have seen, there was tons of nonsense.

Much of the story unfolded through little notes you’d find dotted about – which is at least a cut above straight-out exposition, but the delivery perhaps wasn’t what they intended. The recurrent trope of someone being bitten by a zombie, and slowly degenerating into one themselves is usually harrowing viewing. In note form, as their diary ticks off entries like ‘Itchy. Tasty.’ it becomes unintentionally comic, the kind of laugh you could never get from something that’s actually trying to be funny.

Of course Resident Evil made much of the humble zombie, but that’s merely scratching the surface of its menagerie of enemies. There were giant spiders, evil plants, naked guys, bad monkeys, swarms of leeches, Spanish people, lake beasts, and bees – all of which had been made very, very bloodthirsty by Bad Science. Again, it was grappling with material which could flip from freaky to funny seemingly without even realising it.

The same formula covered the second and third games, which saw the zombie outbreak spread into Raccoon City, the most put-upon city in fictional America since Gotham itself. Beyond that, though – well, all the same seeds were there, but after that the developers were starting to tinker around the edges.

The more action-focused Resident Evil 4 wore its influences on its sleeve. Released in the time of Peter Jackson’s Lord of the Rings and the War on Terror, it literally had you battling cave trolls and calling in the brave men and women of the US Air Force for help. And all this was in aid of the singularly video-gameish plotline of rescuing the President’s daughter.

By now, some of the creakier elements of gameplay had been forced to make some concessions to the passage of time. Going through a door no longer meant a five-second cutscene every single time. The inventory, while still limited in a Tetrisish fit-them-all-in way, might as well have been a cargo ship compared to the older games. And while people might say the previous games’ fixed camera angles had a certain appeal, 4’s status as fan-favourite standout surely has a lot to do with instituting a conventional over-the-shoulder camera perspective.

But this was a double-edged sword. 4’s heady draught led to Resident Evils 5 and 6 transmogrifying into straight-up, gung-ho shooters – and to the formerly everymannish Chris Redfield character becoming an action hero with biceps like watermelons. These weren’t the best entries in the franchise, having thrown the survival horror stuff aside with great force.

However, it was at this point that recurring villain Albert Wesker really came into his own. Originally he’d simply been the team traitor – now he would become a full-fledged Bond villain, monologuing about his plan to destroy the world and dabbling in recreational use of the T-virus to give himself superpowers. If Resident Evil was going to do straight action games, it was at least doing it on its own terms.

Resident Evil 7 – or rather Resident Evil 7: Biohazard, a revival of the franchise’s original Japanese moniker – was never described as a reboot, but was a lot closer to being one than the myriad reboots which boil down to ‘we’re doing it again’. It brought the games back to their survival horror roots, and put the player back in a creepy mansion, alone, once more.

By this era, you got the sense that the developers were actively, consciously leaning into the franchise’s beloved cheesiness. Hapless new protagonist Ethan Winters would be stabbed, maimed, and get gloopy stuff all over him – yet still found the time to offer up b-movie one-liners. And, later on when the plot got heavy, they followed up on all the grandiose world-spanning stuff from the previous games.

Resident Evil 7 was hailed as a return to form – and, as we’ve seen, it was – so Resident Evil 8 (known as Village) was more of the same. By now, though, the audience were being treated to some affectionate winks. The whole affair was constructed similarly to 4 – not identical, but not different enough that anyone who’d played 4 wouldn’t notice a few parallels.

In reference to a particularly notorious moment from the more action-y 5th game, one villain snidely dismissed Chris Redfield as a “boulder-punching asshole“. And the Duke, 8’s roving shopkeeper, would occasionally imitate the endlessly quotable merchant from 4, knowingly attributing the words to “an old friend”.

Plus, Capcom can pretend otherwise all they want, but they knew exactly what they were doing by filling the promos with a nine-foot-tall sexy vampire lady. A game full of dessicated corpses being blown apart isn’t traditionally the place for soft-focus cheesecake, but the women of Resi have traditionally been able to unlock slightly saucier alternate costumes, so it’s not like this was a first offence.

Now, some might say this is how any franchise might evolve, throwing in the occasional barb at its own more mockable moments from times past, it doesn’t necessarily mean they think that’s their main charm. And perhaps not. What’s more of a giveaway is the extensively upgraded remakes of the first, second, and third games, which had all the opportunity in the world to refine some of the cringier parts. Instead, for the most part, they leant into them.

The first game’s live-action intro gave way to an equally hammily acted CG version. Even the “Jill sandwich” line, which it would have been so easy to remove, and which, remember, literally caused the actor to disavow the role, made a slightly modified appearance. The graphics might have been polished to the nines, but the dialogue was just like the old days, which should tell you something about what Capcom thought was more important to preserve. Now Resident Evil could have all the cheese it could ever want, simply by recycling its own past glories.

The issue with putting Resident Evil’s charm down to being cheesy is that the word has never been the most well-defined. The Oxford English Dictionary gives a scattershot definition of ‘cheesy’ as meaning both ‘hackneyed and obviously sentimental’ – and ‘exaggerated and likely to be insincere’. This second definition seems to be limited to the mythical ‘cheesy grin’, since most uses of the word are to describe things which are, before anything else, sincere – perhaps desperately so.

And this is certainly how it applies to Resident Evil. It wheels out all the tropes – haunted house, middle of the night, stuck and paranoid, horrible monsters, underlying conspiracies? Yep, every one, and trots them out with a completely straight face. If you broke it down into parts, you could reassemble basically every slasher film ever made. Call it cheesy, call it campy, call it kitsch – what it also is, is tried and tested.

The most famously hackneyed story beginning is “it was a dark and stormy night…” and sure enough, any Resident Evil novelisations could begin with exactly those words. Despite being a string of horror cliches sellotaped together, it’s this sheer sincerity that makes it all work. It reminds us that, all joking aside, being stuck in a scary mansion would be pretty eerie even before the zombies come at you. It has atmosphere like few other games, and while the newer titles’ first-person viewpoint might be trickling worryingly towards being a straight shooter, it makes the whole experience that much more visceral and intense.

Naturally, it’s a delicate balancing act when a game is trying to take itself seriously in the face of the door cutscenes and the evil plants and the boulder-punching. But Resident Evil is still, after a good 25 years, managing to pull that off. As game franchises go, it might be half a punchline, but it’s also seen more well-respected franchises like Metal Gear Solid and Silent Hill live and die, while it shambles on – groaning, smelling slightly, and downright loveable for it.