Where To Watch The IT Crowd

Strange things happen down in the basement of Deynholm Industries. 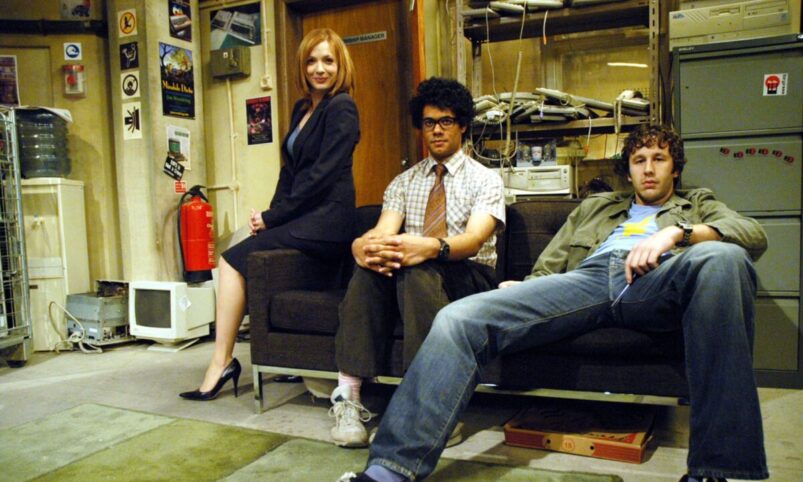 The IT Crowd already has the feel of a retro throwback, covering various touchstones of the Internet 2.0 era, like websites that work out your life expectancy, or memes going viral by email (rather than on one of the five main content-aggregator websites, as it would be today). But what will never go out of style is its three distinct flavours of computer-geek misfit – ‘slightly dysfunctional’, ‘very dysfunctional’, and ‘doesn’t actually know a thing about computers’. Here’s where to watch The IT Crowd in the UK and US.

The IT Crowd Synopsis

“Have you tried turning it off and on again? God, I’m sick of saying that.”

The IT Crowd has three seasons. On paper, our protagonists are the IT department of Deynholm Industries, a non-specific very big company. But since the actual work usually boils down to telling slick corporate types to turn it off and on again, they have to find all sorts of other things to fill their days – like working out how a fire could start in a SeaParks, or what’s behind that red door, or, really, whatever takes their fancy that day. At its core it’s Seinfeld-style comedy about nothing.

If there’s any real narrative throughline to it, it’s new hire Jen (Katherine Parkinson) as a fish out of water. Initially dazzled by Deynholm Industries’ fancy skyscraper and half-mad CEO, she finds herself packed off to run their IT department and ends up down in the basement with social cripples Moss (Richard Ayoade) and Roy (Chris O’Dowd). But despite making a big deal of being their one normal person, it doesn’t take long before Jen adapts to this new ecosystem, with the group becoming more like a family than any of their various above-ground pretensions.

Despite this pedestrian-seeming backdrop, the joy of it is in how quickly things can get out of hand. A casual white lie or a simple phone upgrade will end up spinning out of control and causing more chaos than you might possibly have imagined.

Watch The IT Crowd In The UK

The IT Crowd is available to stream in the UK for free on All4.

You can also buy physical copies on DVD from Amazon. There’s no Blu-ray version at this time.

Watch The IT Crowd In The US

The IT Crowd is available to stream in the US on Netflix or Amazon Prime.

You can also buy physical copies on DVD from Amazon.