Trauma and Triumph in God Forbid by AA Medina 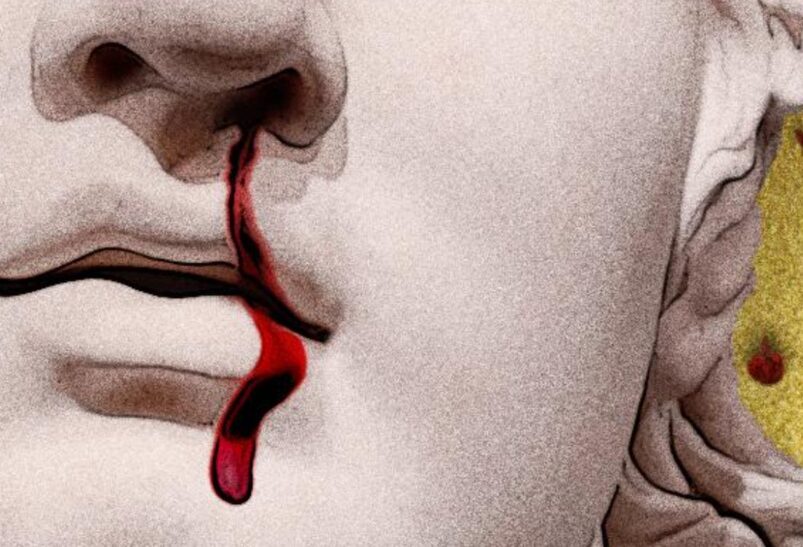 I’d been most familiar with AA Medina as the owner and editor of Aphotic Realm, though he’s also been an author in his own right. When going into God Forbid, I expected it to be a collection of horror stories, especially considering that the foreword was done by the horror author Steve Stred. However, the stories range from horror, to science fiction, to realism, and even a couple short film scripts.

Trauma is a theme familiar to horror, but Medina explores it even in the non-horror works in this collection. For example, the story “Blueberry Pancakes” is a realist story about a woman who develops an aversion to the titular food due to her violent husband making them for her as an “apology” every time he beats her. Part of her journey to severing herself from him for good becomes learning to enjoy the pancakes again when it’s served to her at a bed and breakfast after she escapes.

“Sorry For Your Loss”, the first story in the collection, compares to “Blueberry Pancakes”. It’s about a man so traumatized by finding his wife cheating on him and leaving that he attempts suicide. During this, he inadvertently summons a demon who, in exchange for his soul and a place to live, promises to solve all his problems. Despite the demon’s help, he finds himself annoyed by it as it commits wanton murders in his home. This story is an excellent balance of psychological horror, dark comedy, and the possibly supernatural. “Every Night” is in a similar vein. A man has been haunted by horrible images and sounds every single night since the woman he loves left.When he forces himself to confront them directly, he comes to a frightening realization.

The theme of trauma is strong in both the short film scripts as well. In “Hagraven,” a couple is woken up in the middle of the night to find a mysterious old woman stealing their baby. Their attempts to stop her don’t work and they never see the child again. Much of the story is focused on the fall out of the event. The couple attempts to cope, and often fails in doing so. At the end, when the father seems to have finally re-centered himself, the wound is opened up yet again. In “Jack’s Lunch,” an old man goes to a deli to have a sandwich. While he tries to eat, the Reaper haunts him, forcing him to see a dead friend from his past and his deceased wife. The old man struggles alone with what may be a dying hallucination as the staff of the deli look on.

“Traditions” is another story where trauma and the failure to deal with it comes to an extreme head. A man and his wife have been in an extremely tumultuous marriage that’s resulted in both their children becoming alienated from them and the couple hating each other. While at a cabin for Christmas, the man can’t wait to give his wife a surprise to make up for everything he’s done. Before he has the chance, she reveals she has her own horrible surprise for him.

While all the stories have a dark bent to them, the science fiction stories all have a sense of triumph in the face of absolute horrors. The characters in these stories face traumatic and extreme events, but often overcome them through a mix of luck, intuition, and quick thinking. The settings themselves are also shown to have profoundly corrosive effects on the human psyche. “8-Bit Rebellion,” which closes out the collection, is a cyberpunk story set in a future where every person has a chip embedded in their brain which makes the world black and white to them. The bland, joyless world people are forced to live in, along with overworking in unfulfilling jobs, has made suicide the most common form of death. The protagonist’s best friend ends his own life, which leads him to go to a bar and get blackout drunk. Soon after, he discovers that he’s suddenly able to see more obscure colors, and he stumbles on a plan to overthrow the system by restoring color to everyone’s sight. It’s a well-trodden path, but one Medina delivers well.

In “The Cupbearers,” a group of scientists and soldiers on a spaceship discover a strange flower on an alien planet that seems to be genetically identical to a human. When it comes to life and attacks the crew of the ship, the last remaining survivors find a way to prevent the flower from getting to Earth in one last suicidal bid. This story is a great mix of science fiction and horror and delivers the theme of trauma in a fascinating way. The flower causes its victims to become a member of a hive mind, depersonalized and stripped of all emotion. They shut down and become a mindless force victimizing their former colleagues.

“Salvage” is a steampunk re-telling of Pinocchio. Gepetto discovers a child soldier who’s been mortally wounded in the midst of a violent war. Believing the boy deserves to be remembered, he takes him home and builds an iron replica of the boy. He wants to make sure the boy’s life had meaning despite the pointless carnage of the war. His determination ensures that, despite all that the boy has been through, he’ll continue to live on in more ways than one.

God Forbid is a great collection which shows Medina as an author with a wide range. Even as he comes back to the same themes, he explores them in unique and engaging ways each time. This is the sort of book that makes me excited about the possibilities of contemporary short fiction much in the same way the short stories of authors like Jeremy Robert Johnson.