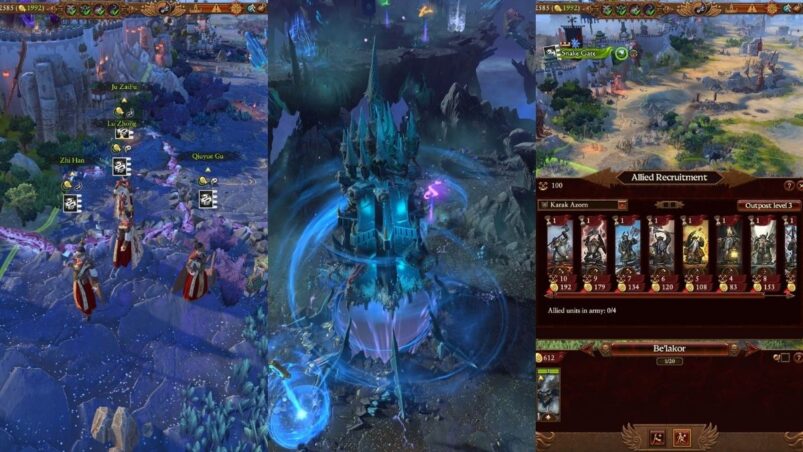 Total War: Warhammer 3 is a wide-open, yet dangerous playground that will challenge players’ abilities to think on the fly and make the best decisions under threat of invasion, surprise attack, and the corruption of Chaos. For beginners in particular, Warhammer may be overwhelming with its multitude of varied factions, powerful magic system, and the complicated web of diplomatic relations. Let’s help you get started with a few Total War: Warhammer 3 tips to get you on your feet.

The long-term health and survival of most empires is a robust economy with well-developed infrastructure. All settlements can build up to at least three tiers or five for most province capitals and large cities.

To quickly build settlements up to their highest level for the maximum level of construction flexibility, players will need to grow their population surplus to accommodate settlement expansion. Activate commandments and build structures that increase the province’s growth level as early as possible, so that later you can transition to more economically profitable buildings.

Use Heroes to Increase Income

Though not at all factions may benefit from the following tip, several factions like Kislev and Grand Cathay have Heroes that include a passive income-boosting ability when they’re present in a province. It can be quite profitable to place these Heroes in your most lucrative province to further boost its profitability. This economic tactic is more useful to do in the middle phase of the campaign when the gains from these small increases have a greater impact.

Regardless of the difficulty, but especially on higher levels, when an AI faction goes to war with the player, they’ll typically send armies to the least defended settlements, which could even be deep in your heartland leading to wild goose chases that may delay your moves of expansion. To help stall the AI, but also strengthen your faction with armies across your entire faction, consider building garrisons everywhere. Even if the AI starts besieging settlements with garrisons, they’ll usually be reluctant to attack right away, buying the player time to put together a relief army to relieve the hemmed in defence forces.

Throughout any campaign, it’s highly likely that players will have so many magical items and ancillaries looted that they won’t know what to do with them all. While you could leave them gathering dust in storage a more useful application of unused items is to either fuse or salvage them.

In the character item selection panel, you can select two items of the same rarity and fuse them to create one item of the next level of rarity above. Alternatively, if you need a bit of extra cash, you can sell as many items and ancillaries to get a small cash infusion if you’re in a tight spot, economically.

Warhammer 3’s diplomacy system has been reworked to make allies more useful and to provide more options for players to actively utilize their comrades in a coordinated effort. Once you sign a defensive or military alliance with a faction, in the allegiance panel of that faction in the diplomacy screen, players can see if they can build an outpost in a province capital of that particular ally.

Outposts cost money to build, will grant a small garrison for that settlement and will allow the owner of the outpost to recruit units from the ally. AI allies will also tend to build their own outposts in your territory, which will help with territorial protection.

Alongside the growing hordes of daemonic enemies, the greatest threat to the player’s faction will be the spread of Chaos corruption, which gets kicked into overdrive when rifts into the Realms of Chaos start popping up everywhere. Provinces that contain a rift will suffer a massive increase in corruption and high levels of Chaos corruption will lead to various annoying and debilitating effects on public order, army replenishment, and population growth. These rifts will also see Chaos armies and characters spawn and start rampaging across your land.

The only way to halt this process is to physically send armies into the rifts to close them and stop the spread of corruption. Be wary, however, as you will need to defeat a Chaos army to close the rift, and these armies grow in strength the longer the campaign goes on.

Grand Cathay makes its debut appearance in the Warhammer franchise and one of its dominant features is Harmony. Cathayan infrastructure, characters, and units are all associated with either a Yin or Yang rating with units affecting only the battlefield and not the strategic landscape.

The Cathayan economy will benefit from a focus on Yin or Yang if the player chooses to focus one direction or the other, however, the economy as a whole will suffer due to this imbalance. When Yin and Yang is balanced out across the empire, the player will enjoy the greatest boon to their economy with significant increases to income, growth, and diplomatic relations, so it’s a good idea to make sure the you balance out the Yin and Yang ratings at all times.

Invest in Your Caravans

Another major Cathayan mechanic is the caravan dispatch system, where players can send expeditions down the Ivory Road to the Western powers of the Old World to earn a serious profit. These caravans may get attacked by rampaging Ogre bands in the Mountatins of Mourn or even attacked by Chaos forces once the make their to the Southern portions of the map.

It is wise then to ensure that every caravan is maximally protected and prepared for the dangerous road ahead, as well as setup to earn the player the greatest amount of money. When choosing a caravan master for the expedition, carefully consider their trait, as it will define their starting escort army, consider any items you want to give the caravan leader, and make sure to make character level up choices to improve the character’s combat performance and army benefit.

The ranged meta is still alive and well in Warhammer 3 in that ranged units of all kinds, archers, crossbowmen, musketeers, magic javelineers, artillery, and everything in between will typically cause far more damage than even some of the best elite infantry or cavalry. As such, if your faction allows, consider leaving 60-75% of your armies to ranged units with rest of the army slots taken up by Heroes and a small, but study line of infantry.

Use A Chequerboard Formation

Piggybacking off the previous tip, deploying your army in a chequerboard formation with multiple rows of troops with gaps in-between each unit will optimize the blocking ability of your front ranks, while leaving gaps for ranged units to shoot into close-quarters combat. This formation is also useful in maximizing the army’s protection against devastating vortex, wind, or line spells that can hit multiple units at a time if placed well.

Speaking of magic, along with ranged troops, magic may be your faction’s most powerful weapon depending on the specific lores of magic they have access to. A useful tactic to optimize the damage of vortex, bombardment, and wind spells is to find ways to force enemy units to clump together in a tight moshpit around a single target. Once they’re engaged, start dropping heavy damage spells on the densest concentration of enemy units and watch the kill count go up.

Auto-resolve is not your friend in Warhammer 3’s campaign and it is even more punishing on higher difficulties to the point that even seemingly easy engagements can leave your armies unfairly battered and bruised. As such, to both avoid the punishing auto-resolve, but also to get practice microing units and getting at least some control experience for multiplayer, make sure to play most battles manually, especially if it means keeping your troops combat effective. Really only consider auto-resolving if it’s a simple cleanup battle with 90-100% odds in your favor.

After battle is won and the enemy is on the run, unless you were fighting daemons or undead, there will likely be enemy units running for the hill. If possible try to shoot or run down these fleeing units as there are a multitude of benefits for doing so.

Firstly, when units get reduced to about 10-15% of their size after a fight they will be eliminated from the campaign map. Second, many factions, like Kislev and Nurgle, have post-battle captive options that may scale with the number of captives you obtain during the rout phase. In this post-victory phase, fast-moving units, especially cavalry can be incredibly useful to wrack up prisoner numbers and ensure the enemy army fully loses units.

In the Realm of Chaos campaign, players will be expected to enter the domains of each Chaos God to claim the souls of their greatest champions to open a path to the Forge of Souls and claim the Bear-God Ursun’s soul. Throughout the campaign, the intensity and strength of enemies faced will go up, meaning some realms may get exponentially more difficult to traverse the longer you wait. Tzeentch’s armies can become incredibly dangerous with their reliance on ranged and explosive damage from flamers, while Khorne’s hosts of bloodthirsty Chaos Warriors and powerful Bloodletter daemons will run over most infantry you may throw at them.

As such, we recommend considering Khorne or Tzeentch’s realms first as these may be the most challenging in the latter stages of a campaign. There’s an argument to be made that entering Slaanesh’s realm first with the intent of accepting the Dark Prince’s gifts rather than hunting for the champion’s soul is a valid approach. However, if you’re solely intending to play the objective Tzeentch’s and Khorne’s realms are good starting locations to keep their challenge levels down to a minimum.

READ NEXT: 20 Best Sci-Fi Strategy Games of All Time