Fade To Silence (PC) REVIEW – Over My Dead Body

Fade to Silence suffers from major flaws that prevent it from being truly enjoyable. 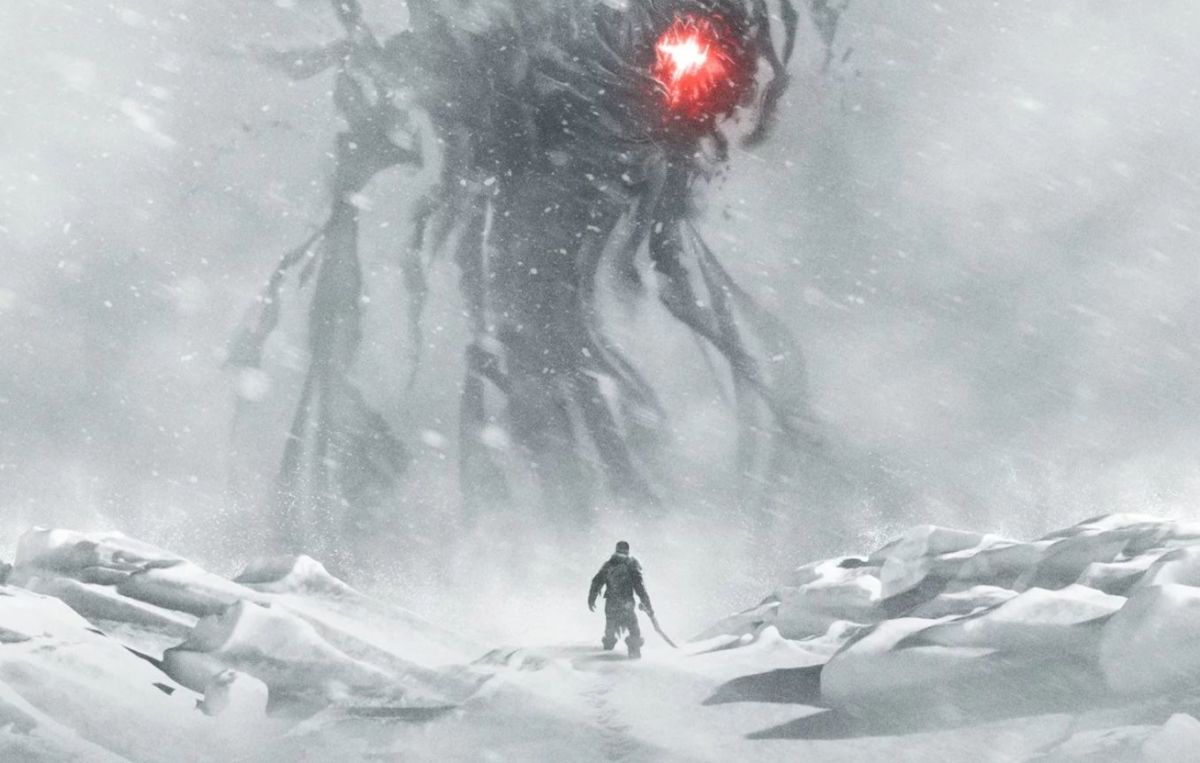 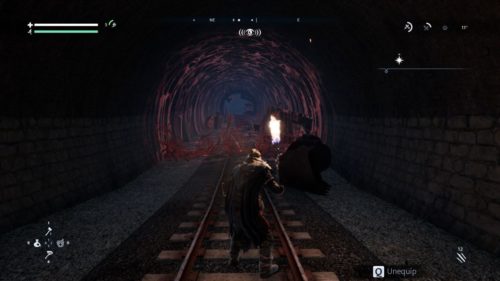 Open world survival games get a bad rap nowadays. It does get a bit tiresome when every other game on the market has you chopping down trees and scavenging for food to manage your hunger meter, but every now and then, a fresh take on the genre comes along as a reminder why those tired features were fun in the first place. At first glance, Fade to Silence seems to fall into this category, but while the premise is compelling and the survival aspects are well executed, the core combat mechanics make it a nightmare to slog through.

The game opens with little exposition and throws you into the thick of it from the beginning. A sinister figure hovers, monologuing over a dead body in the center of a ritualistic effigy on the floor. It mocks Ash, the fallen hero, taunting him before diving into his body like a ghost. Ash gasps, life returning to his body as one of the seven candles around the effigy is snuffed out. These candles represent Ash’s lives, leaving you with six total at the beginning of the game. 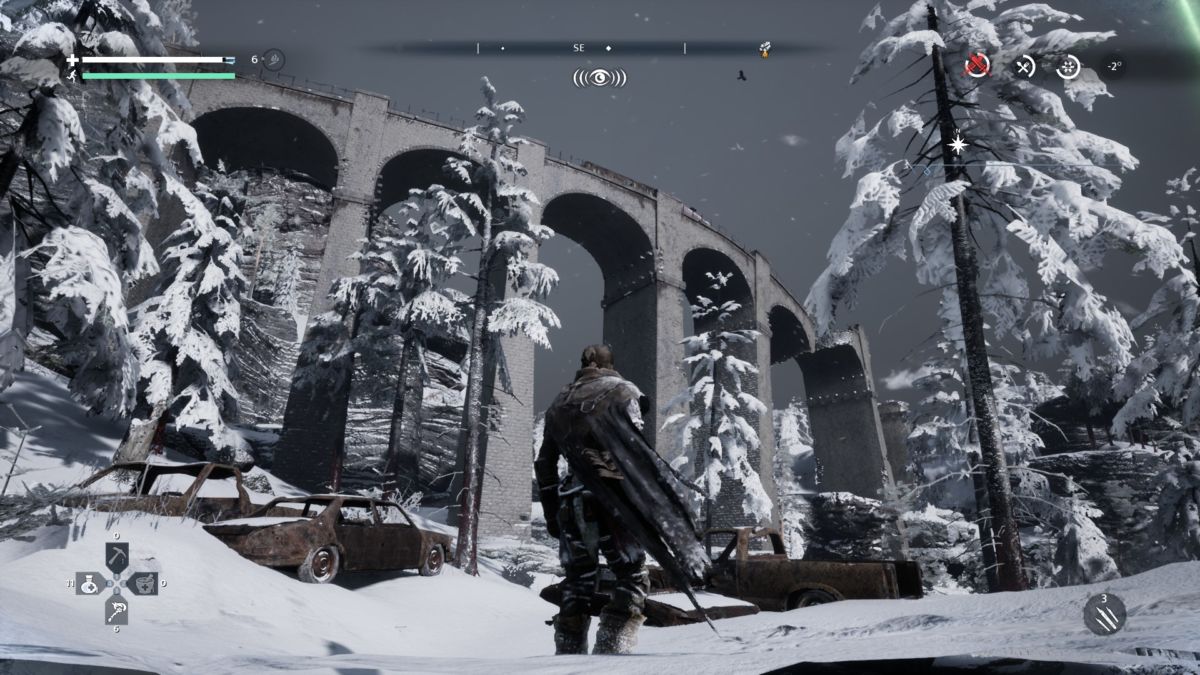 Ash stumbles out of the temple and into the burning remains of his camp, which is currently under attack by the Blight. The Blight is the red, vine-like corruption spreading throughout the world. It’s intent on using its army of monsters to snuff out any traces of life left, and it’s driven by the same Inner Voice that is riding along in Ash’s body. Ash fights off the attack, but the camp is devastated, and he and his daughter must start from scratch. From here, the game opens up for you to explore as you wish.

Exploration is far and beyond the best aspect of this game. The frozen, post-apocalyptic environment is depressingly beautiful. The snow effects are some of the best on offer outside of a major AAA title, and every location, from tiny, burnt-out shacks to sprawling, infested train stations, is handcrafted and begging to be explored (and looted). The largest structures convert to outposts after you clear them out, and from there you can launch dog sled expeditions to even further locales. 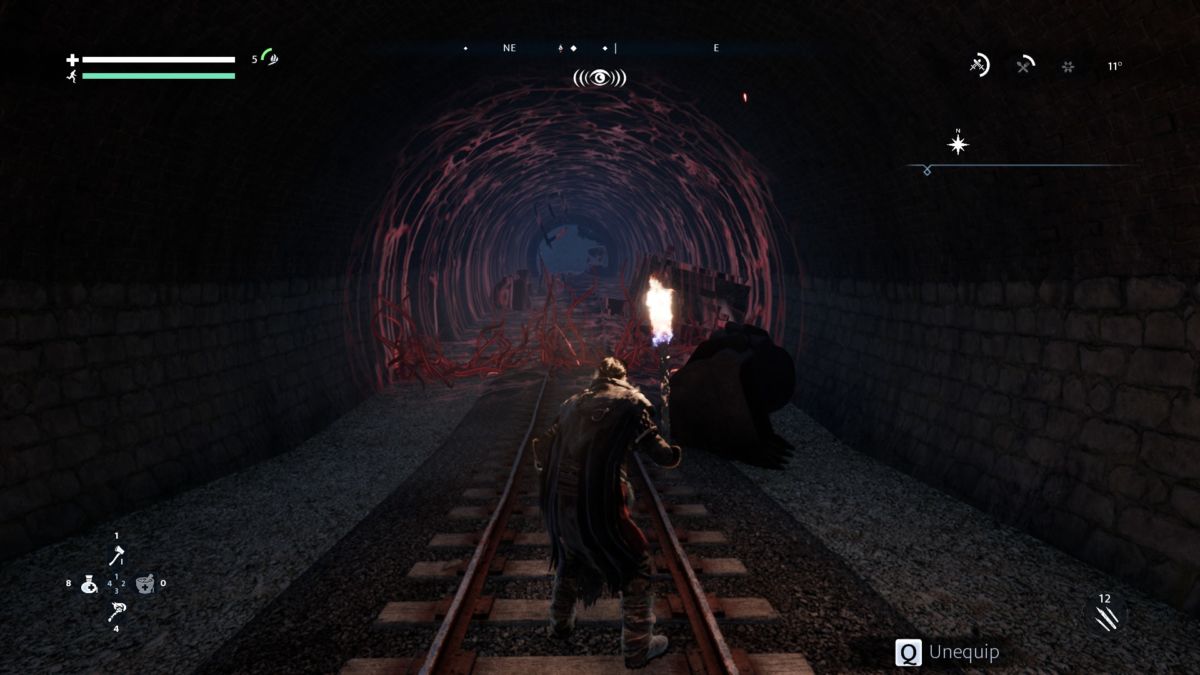 There is a barebones base building feature in which you can build a few different specialized huts with scrap and salvage from your scavenging. An open space in front of your camp becomes a construction site for important buildings like a sledding kennel for your dogs, woodcutter and butcher huts to process tainted resources, and workshops like the forge to create more advanced tools. Besides the functional buildings, you can also build walls and, at higher levels, some defensive emplacements like a ballista to help fend off periodic waves of monsters. You can’t build anything yourself, though. The only way to do so is to assign one of your followers, who will then take on the task over a number of in game hours. Or they may lose interest and revert back to hunting or harvesting or sleeping instead, leaving you to return hours later to an important building that hasn’t progressed at all. The game would have been served much better by scrapping the base building entirely and instead using a simpler upgrade tree.

While out collecting supplies and fending off monsters, you’ll encounter survivors out in the world that you can invite to your camp. These followers aren’t randomly generated, soulless automatons, either. Each one is actually an interesting character, with unique personalities and skills that prove essential to rebuilding and defending the camp. Unfortunately, the well-written characters are buried under awful voice acting and stilted dialogue. It was a good decision to forego randomly generated followers, but it’s difficult to care for characters when you can’t even listen to them speak without cringing. 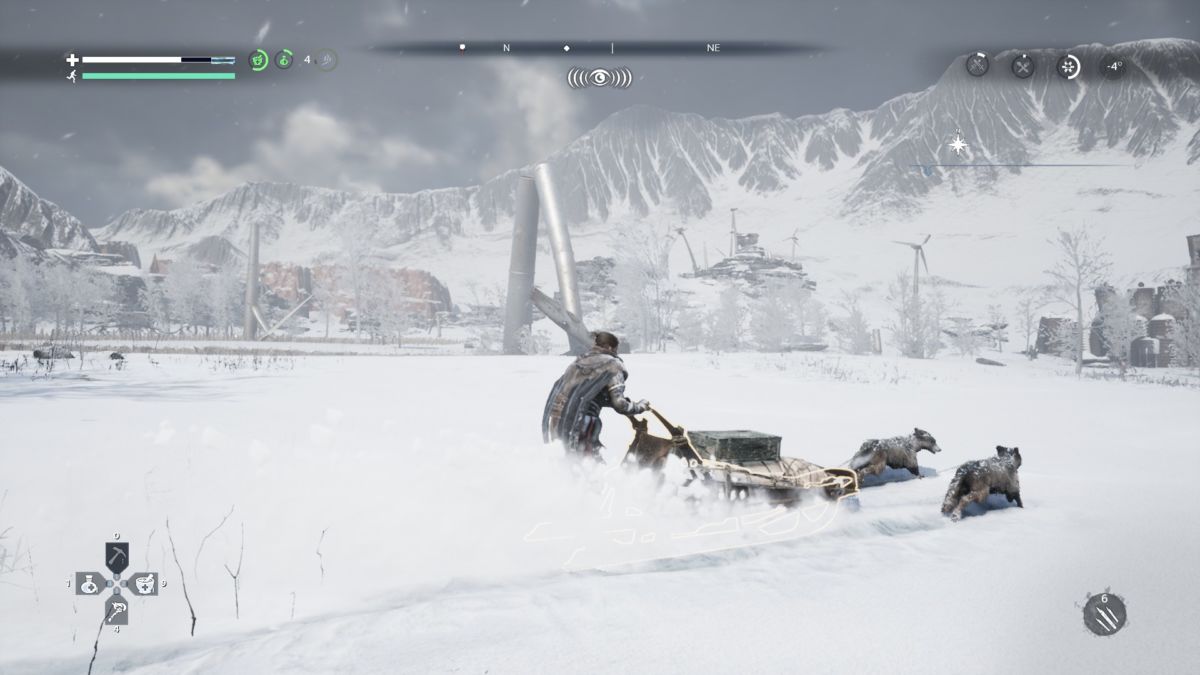 READ NEXT: 10 Best PS4 Survival Games You Should Play

There’s also very little interaction with them. There’s a short dialogue tree when you first meet each follower, but the options you choose don’t seem to have much effect, and they always end in the binary choice of “join my camp or go away”. They will drop comments in reply to your orders while wandering around camp, but that’s the extent of their conversationalism. You can tell by the personalities on display in their limited interactions that these followers would make interesting companions, if they weren’t for the most part hidden behind bad voice acting and blank stares.

There is one glowing exception to the bad voice acting plague, however, and fortunately it’s the voice you hear the most throughout the game. The Inner Voice, that wispy demon possessing Ash’s body, is a constant thorn in your side. Taking on the role of an antagonistic narrator, the Inner Voice has a discouraging remark or frustrating taunt for your every action, delivered in a creepy, demonic voice. Freezing to death in a blizzard, searching desperately for shelter? He’ll gently encourage you to lie down and dream of a warm campfire. Combing through an abandoned park for scraps of food? He’ll regale you with glee about forcing the campers to turn to cannibalism in the face of starvation. He has a bit of range, too, from sadistic mockery to sarcasm to pure hate and rage when you manage to succeed in spite of his admonishment. His constant prodding almost inspires you to work even harder to survive. The Inner Voice is a villain you love to hate, and he provides some much needed flavor to an otherwise flat, boring cast. 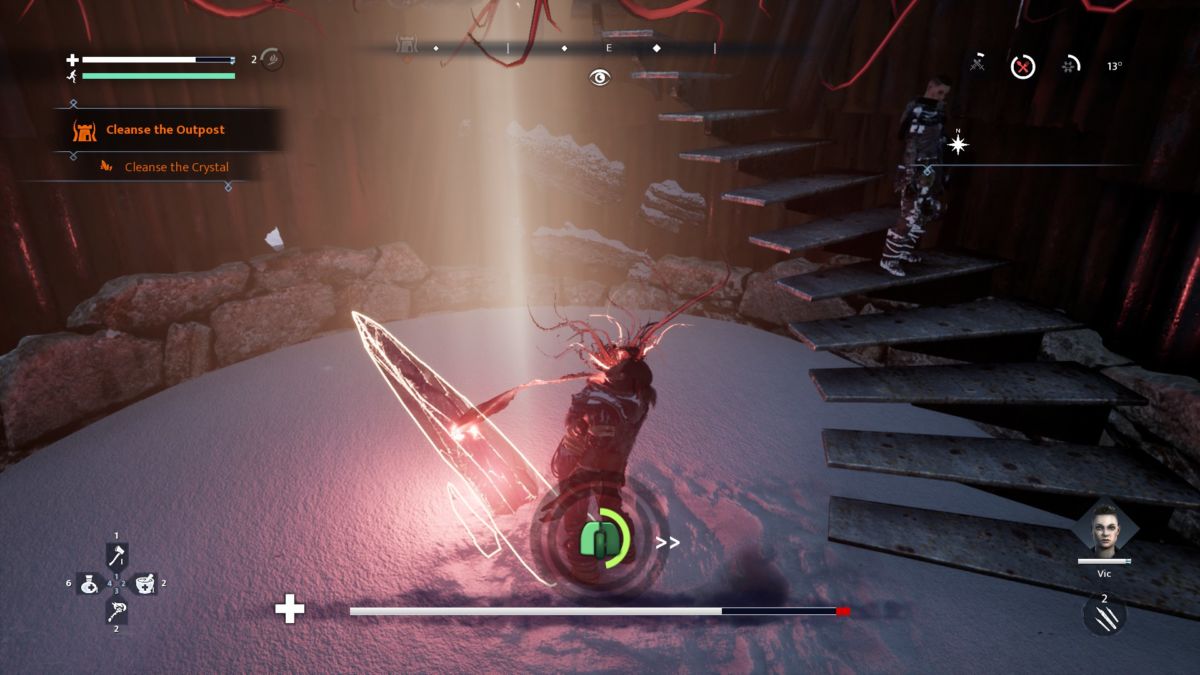 The Blight commanded by the Inner Voice is an ominous corruption spreading through the world. Its presence is felt in every aspect of the world. All but a precious few trees are tainted with Blight and unusable. Enemies drop eldritch essence, which can be combined with mutated plants like blightbane and bloodhaw that appeared with the Blight to make potions. Strange portals are spread throughout the environment, through which Ash can pull eldritch essence and other magical oddities after a brief interaction with the Inner Voice. Blight nests are spread throughout each area, rewarding essence and other ingredients upon their destruction. The most ominous manifestation of the Blight is the enormous, moon-like orb that hovers omnipresently over the map. Occasionally, it will drift into Ash’s path and rain down exploding Blight nodules like a gross meteor shower.

Fade to Silence really does have an intriguing world to explore. Dwindling resources incentivize you to always push further and further away from camp, and behind every corner is a unique new area. The world opens up even more when you unlock the dog sled, which allows you to travel greater distances for longer periods and is a joy to drive, even if it is a glitchy mess. Fortunately, the developers were kind enough to offer an easy hotkey to pick up and place the sled back on solid ground when it inevitably clips through the environment for the twentieth time. 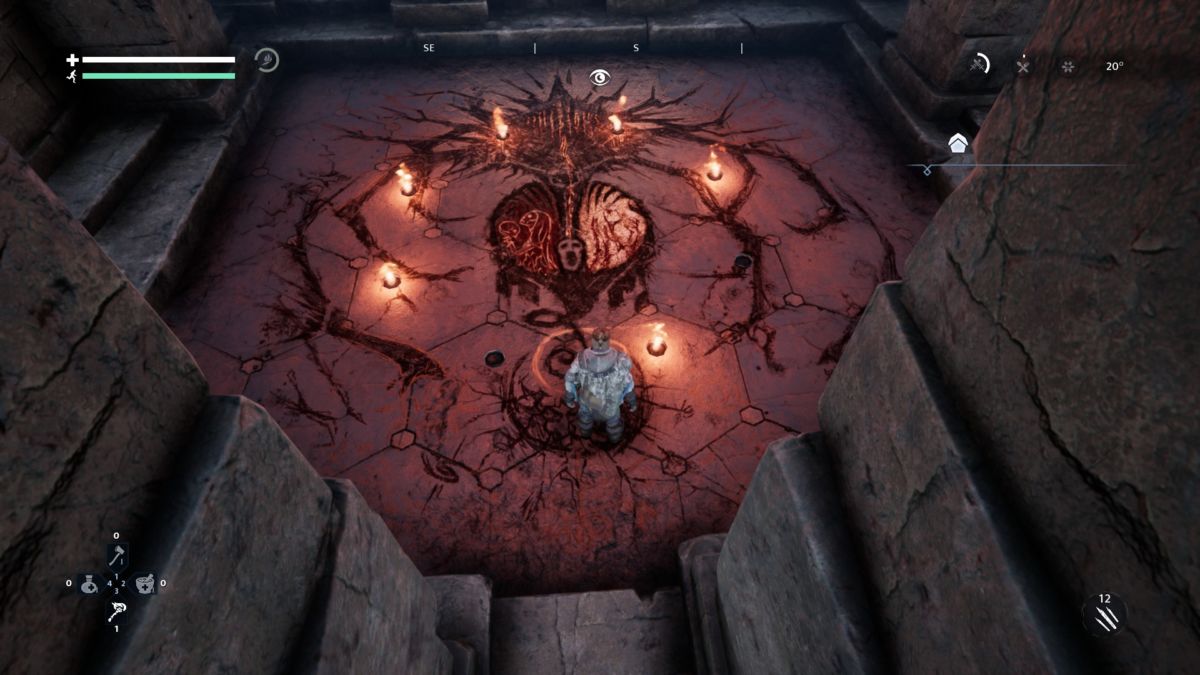 Despite how fun exploring the world is, there is a major roadblock that hamstrings the fun at every opportunity, and that is the game’s terrible combat system. It’s a simple and familiar premise. A stamina bar, light attacks, heavy attacks, dodges and parries, and, well, that’s it. You can throw a bow in there, too, if you’re feeling creative, but it’s better suited for hunting. That simple system would be acceptable, if it wasn’t executed so poorly. Hit registration is off, parry timing is a crapshoot, and one out of every three arrows will shoot approximately ninety degrees away from where you’re aiming. Even the basic enemies require one or two full stamina bars worth of attacks to finally bring down, if they haven’t arbitrarily decided to stun lock you instead. On more than one occasion, I found myself being hit with a knockdown attack, then another knockdown attack before I could recover, repeatedly until I died, a frustrating waste of one of my limited lives.

It really is a shame, because butting heads with the combat system gets in the way of enjoying the game’s rich world. Nothing is worse than being ripped out of your immersion every few minutes and forced to engage with a jarringly flawed, broken feature. You’re left dreading every combat encounter, not because it’s scary or difficult, but because it’s just tedious. This is amplified by the fact that you only have six lives before your progress is wiped. Some gameplay perks can be acquired that carry over to a new playthrough, but they are a pittance compared to the time invested to get them. There is an exploration mode that reduces difficulty, but you shouldn’t have to neuter a game’s combat in order to enjoy it. There’s also a co-op mode in which a friend can assume the role of one of your followers, but that takes a follower away from your camp, where they would be better utilized constructing buildings or processing resources, neither of which the player can do themselves.

If it wasn’t for the hellish combination of a deeply flawed, sometimes broken combat system and permadeath mechanics, Fade to Silence could be one of the strongest survival titles on the market, despite minor but pervasive glitches. The game desperately needs to revamp some core aspects before it can really shine, but there’s a great deal of potential under the surface.

Verdict
Fade to Silence suffers from major flaws that prevent it from being truly enjoyable. Significant redesigns are needed to bring this game up to snuff.
4