Lu Bu demands that you play this game. 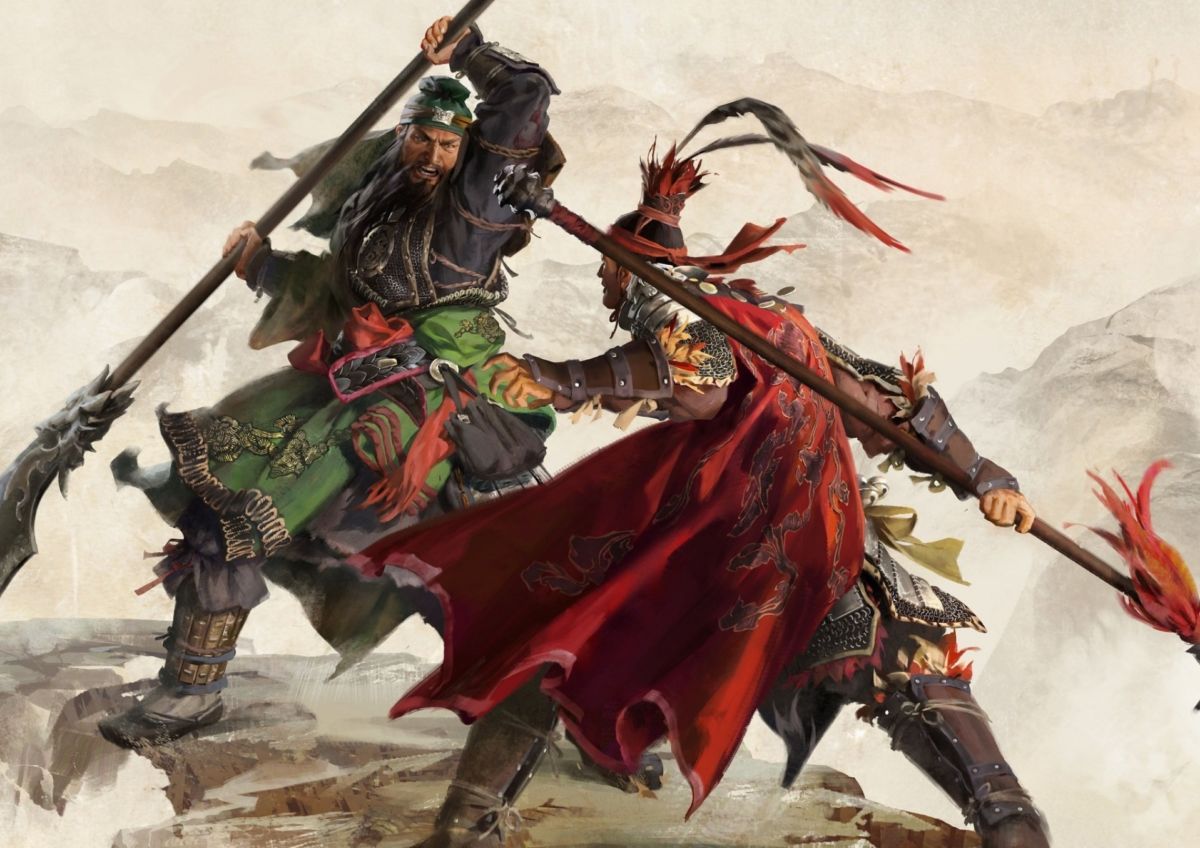 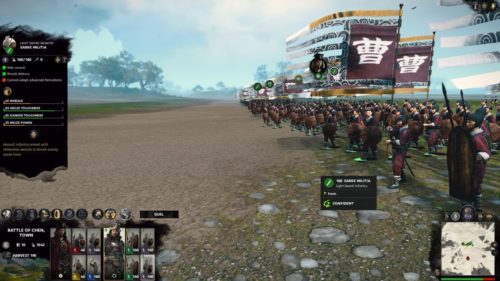 The city was burning, its gates smashed and dead defenders littered the streets. I had won. An old foe who had been a thorn in my side since the beginning of my unification of China was finally vanquished. All was well, except that one of my Generals and his retinue had paid a very steep butcher’s bill for the victory.

He was none too happy about it and it sowed the seed that would prove to be my undoing. After a few more battles, his dissatisfaction had grown so much that he left my service. I lost one of my best fighters and a good portion of my best soldiers went with him. This was when I knew that I loved Total War: Three Kingdoms. 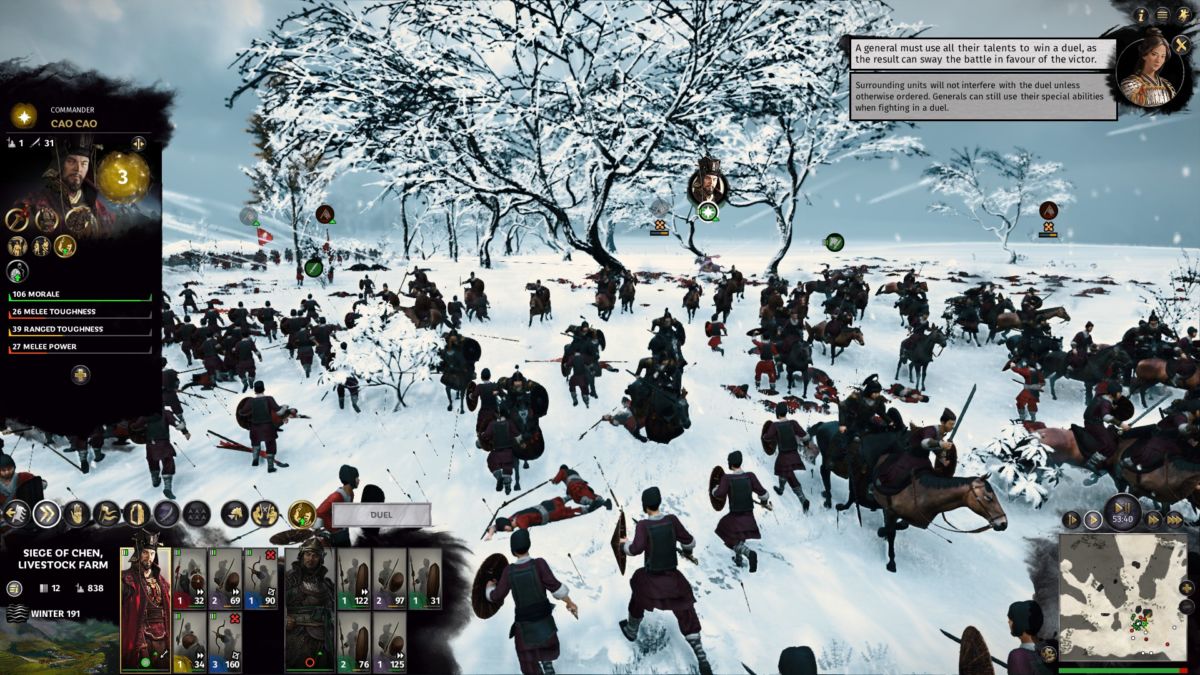 China is in turmoil, the corrupt Han dynasty has made a mess of things and now warlords, rebels and chieftains are vying to replace it. Your goal is as simple as it is daunting: unify China and create your own imperial dynasty. So far, everything looks familiar to any other Total War game. However, Creative Assembly has done extensive work under the hood of Three Kingdoms to renew and revitalize the series after many years of diminishing returns.

The epic Romance of the Three Kingdoms serves as the backdrop to this game, and it shows. People might be familiar with this ancient story from games like Dynasty Warriors, and Creative Assembly sure has done their homework. The story, as well as this game, is filled with larger than life characters such as Lu Bu, the master spearman, Cao Cao, the strategic genius, or the tyrant Dong Zhuo. 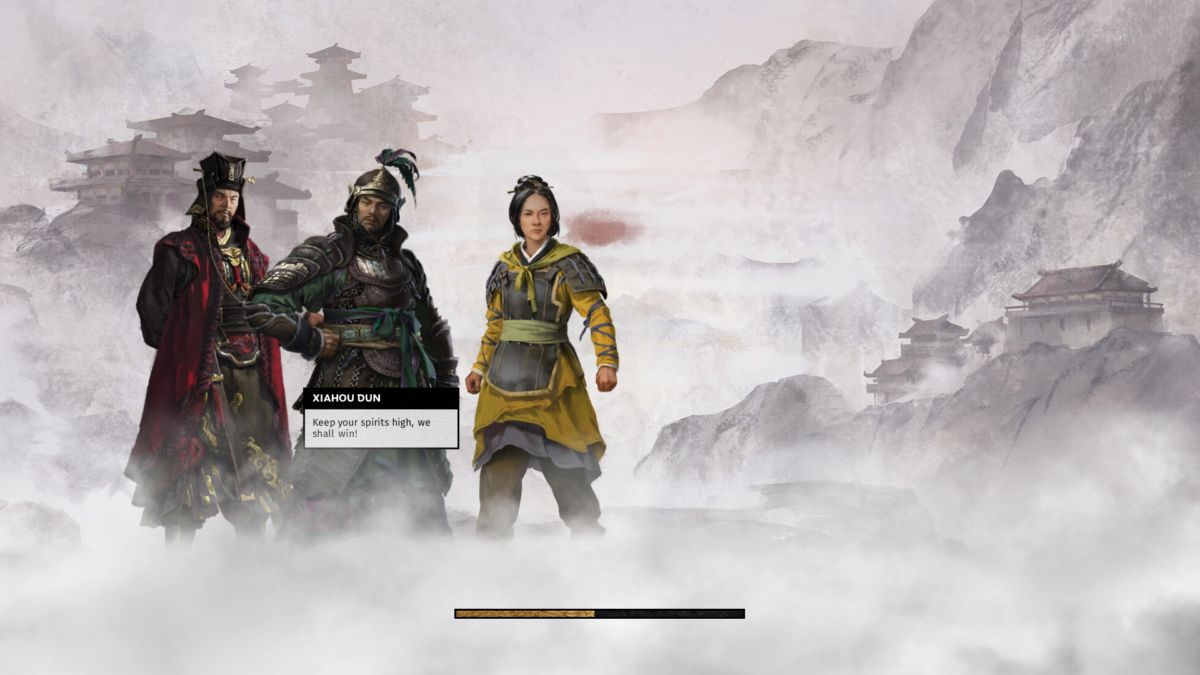 Indeed, Three Kingdoms can be played in two distinct modes, with the default Romance Mode more or less letting you retell your own Romance of the Three Kingdoms, filled with epic heroes, betrayals, and rebellions. Being able to tell your own story and depict your rise to power is nothing new for a Total War game. After all, that is what they have always been about. This is, however, the first time they have opted to use an already established epic narrative as the basis for how the campaign is played and laid out.

It works well and although the campaign doesn’t follow the book completely as you are free to shape your own story, it is littered with events taken from the book and above all it nails the overall theme of Romance of the Three Kingdoms. Though I am far from a scholar in the field, my own interpretation of Romance of The Three Kingdoms is that it is a story about people who come together for a common cause. To fight some greater evil or achieve a greater good, only to see this bond and coalition crumble in the names of ambition, greed or circumstance. 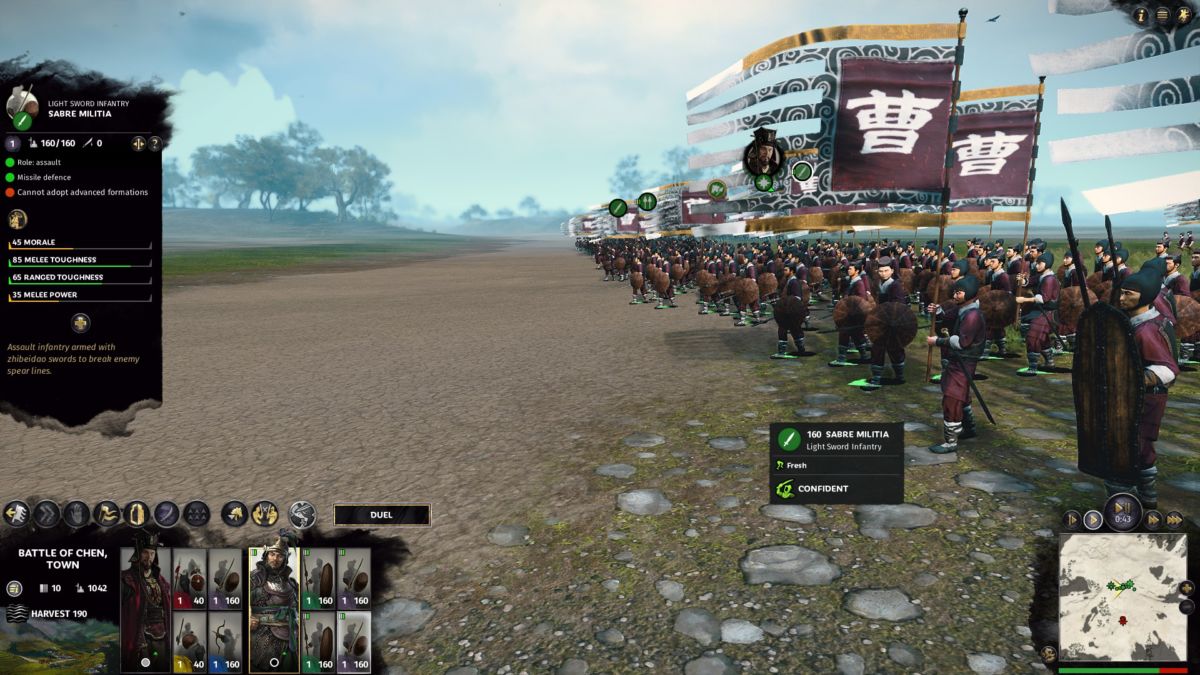 In Total War: Three Kingdoms this theme is shown in the way diplomacy and relations work. Alliances will constantly be shifting and characters will backstab each other multiple times over the course of a single campaign. I have fought both in and against coalitions and seen them turn on each other once a mutual threat seems weakened enough and personal ambition grows.

Again, at the end of a campaign, you will feel like you lived through your version of the novel. You will look back at the time you formed a coalition with the Yellow Turbans to take out Lu Bu. You will curse your general who decided you were too chummy with a perceived enemy, causing him to stab you in the back. You will lament your biggest hero getting executed by the enemy, but you’ll also remember how you formed a coalition to punish them for their crimes. Three Kingdoms is a game that leaves you with these kinds of stories after each campaign you play. 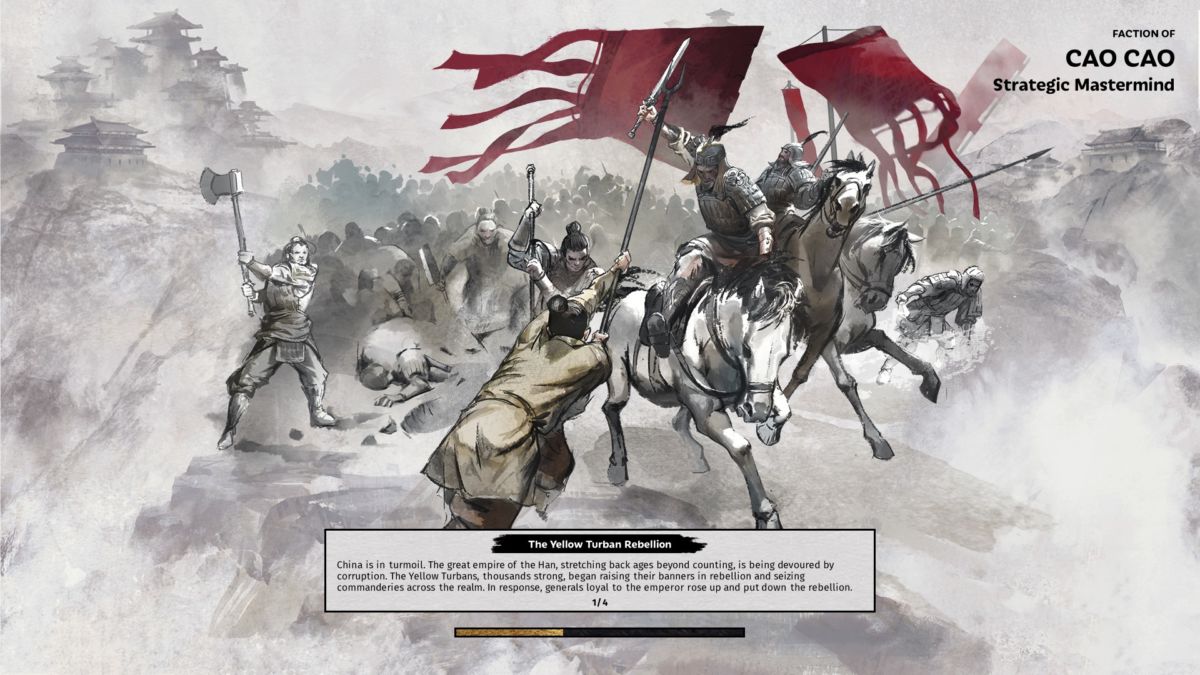 Everything in the game design seems to fill this purpose as well. Take army recruitment for instance. Total War games have always treated their armies more or less like anonymous mobs of soldiers. If one is wiped out you simply replace it. Not so in Three Kingdoms- here each unit is part of a general’s retinue. They come with him when you recruit him and will stay with him until you dismiss the unit for something else. This makes armies feel much more attached to their commanders as the only way to grow your army is to recruit more officers.

It also makes betrayals hurt doubly so since a rebellious commander will bring his retinue with him. Once more, this furthers the narrative aspects of the game. You paid for those elite cavalry units that the treacherous bastard is sending against you, after all. It gives both the fighting and the campaign a whole lot more personality. 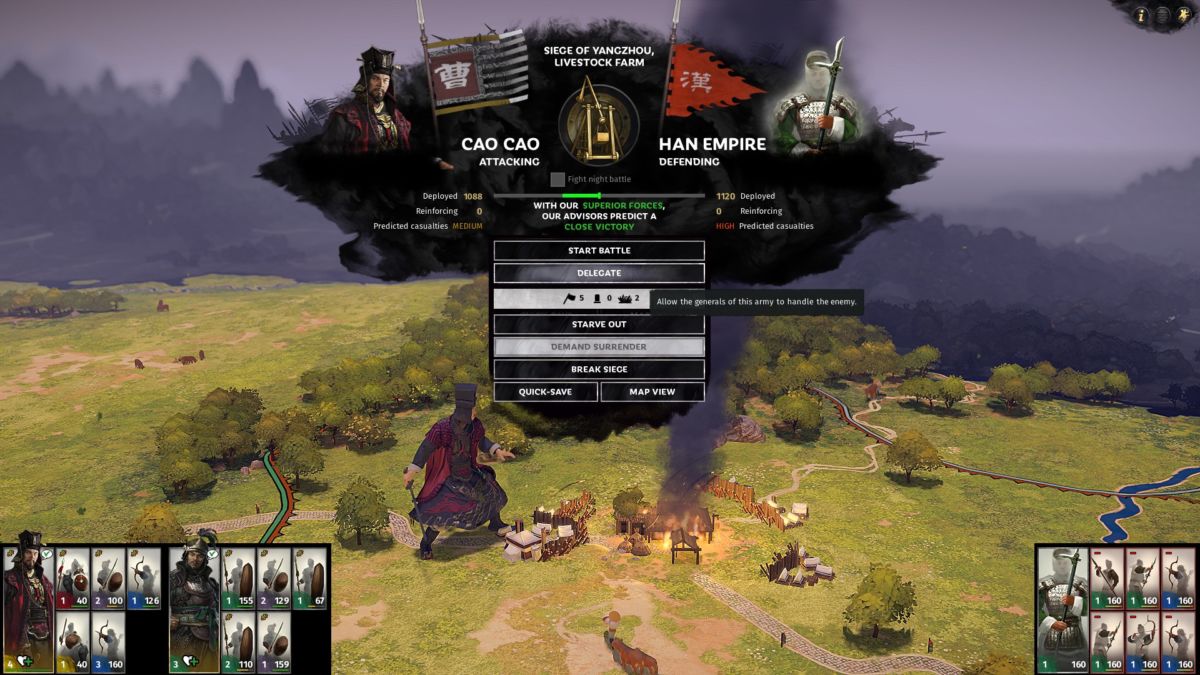 Speaking of which, a character’s personality is divided into five archetypes based on the Chinese notion of the five elements: earth, fire, water, metal, and wood. What type of character you recruit determines what sort of an army he or she is best at fielding. For instance, a character with the water personality tends to be better with ranged units and siege equipment while a fire character makes better use of swift shock cavalry.

Another new thing, for historical Total War games at least, is that each character can be equipped with weapons and gear which grants substantial bonuses to either their army or their stats. Leveling is also expanded for the generals and they learn real powerful skills as they increase in rank. Again, it all fits together neatly in making your armies feel more personal and feeds into that notion of creating your own Romance of the Three Kingdoms. 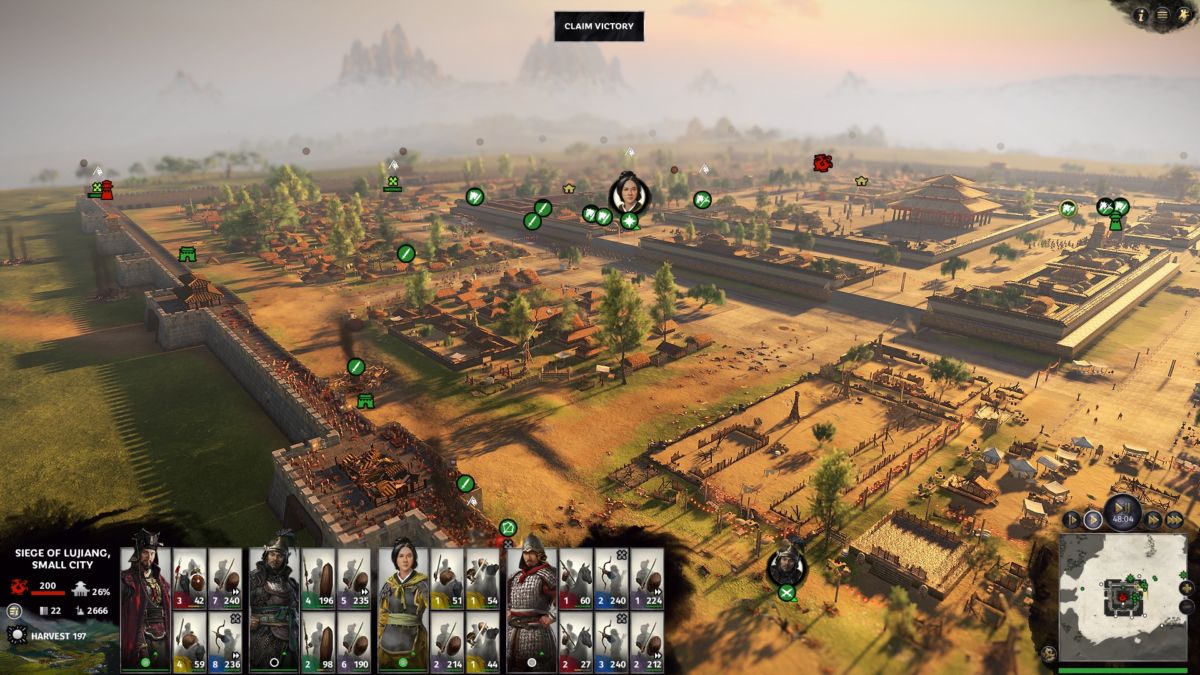 The emphasis on characters also plays heavily into relationships and diplomacy. Different types of characters have a harder or easier time of getting along. Fire and water types usually do not like each other and might actually become openly hostile towards each other. This goes for both characters in your faction and leaders of other factions, so having the patience to nurture and build relationships with your officers as well as rivals becomes vital.

For the purists though, there is always the option to go for the Records mode instead. It strips away most, if not all of the extended character mechanics and reverts Three Kingdoms back into a more old school Total War experience. In this mode, generals can’t duel and aren’t single hero units but rather have the old model of a general’s guard on the battlefield. Personally, I really liked the Romance Mode and spent most of my time playing in that mode, but it’s nice to see that there are options which, if nothing else, will extend the replayability of Three Kingdoms even further. 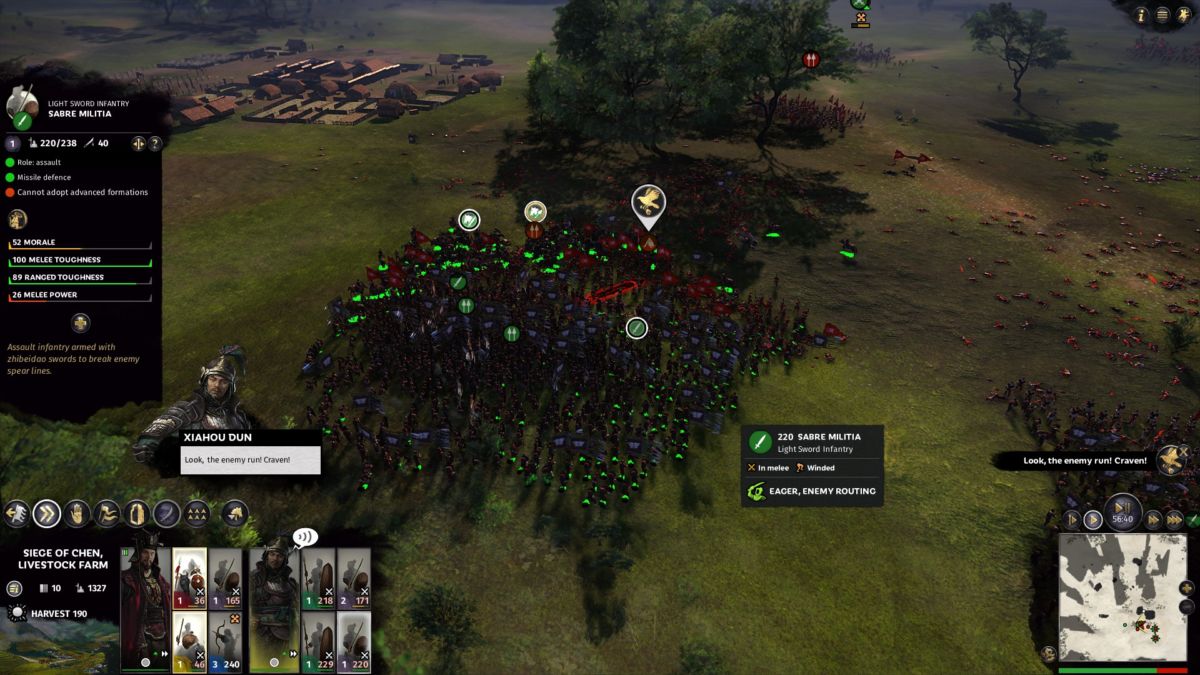 In addition to the two separate game modes available you also have the ability to play multiplayer, if you so desire. Multiplayer has never really been the greatest draw of these games as it is hard to synchronize a 20h+ campaign with someone. It doesn’t help that, at the time of this writing, there’s only a single multiplayer server available, worldwide. So there’s that.

As mentioned above, the diplomacy AI and the system has been reworked to a great degree, which has been much needed for years. Total War games have been plagued with abysmal diplomacy mechanics since its inception, with AI making deals and decisions that make little to no sense at all. For instance, it was almost impossible to form long term and stable alliances in other games. The AI was simply built to dislike you eventually, in order to force you to go to war with them. 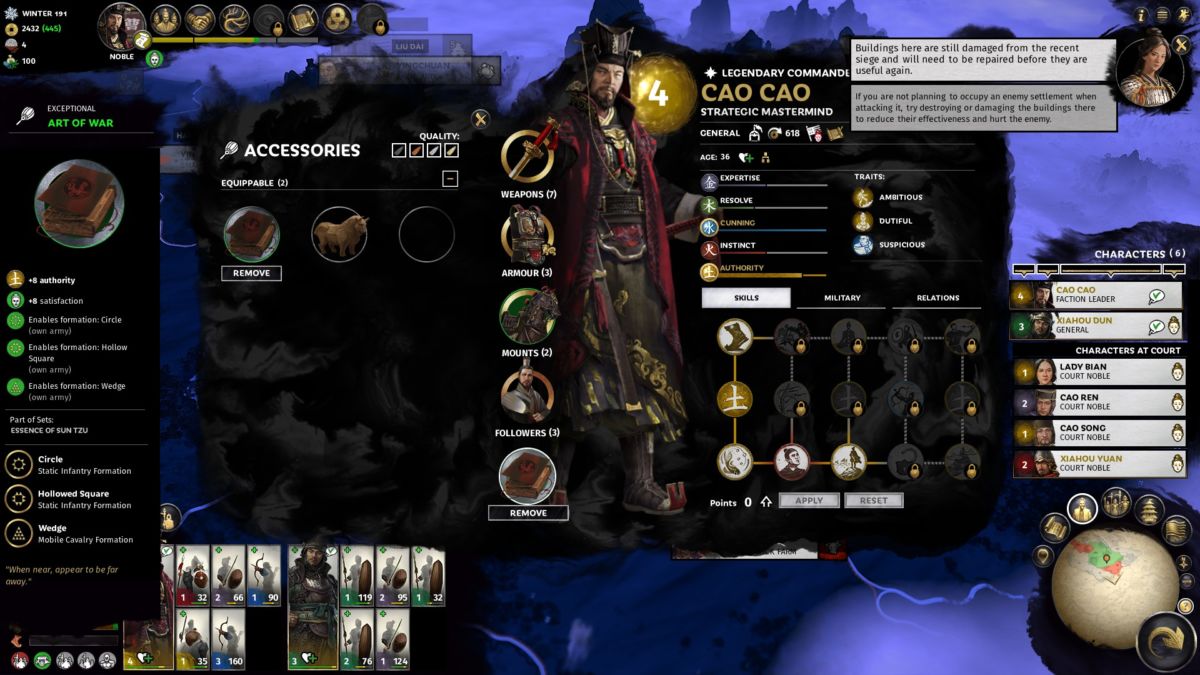 In Three Kingdoms, however, you’re able to build some really strong bonds and relationships between characters and factions. I’ve had games in which I was on good terms and peacefully trading with a neighbor for almost the entirety of my campaign; an almost impossible notion in the previous games.

Three Kingdoms is not only great fun to play, but it also runs like a dream on my 4-year-old Core i5 and a GTX 1070. In all the years of playing Total War games, I have never experienced a launch that runs this well. Load times are kept reasonable, as are turn times. It used to be that whenever a new Total War game launched you’d have to start thinking about CPU and memory upgrades, but that’s not the case here. I don’t know what sorcery Creative Assembly made use of to achieve this as it is also easily the best looking game in the series to boot. 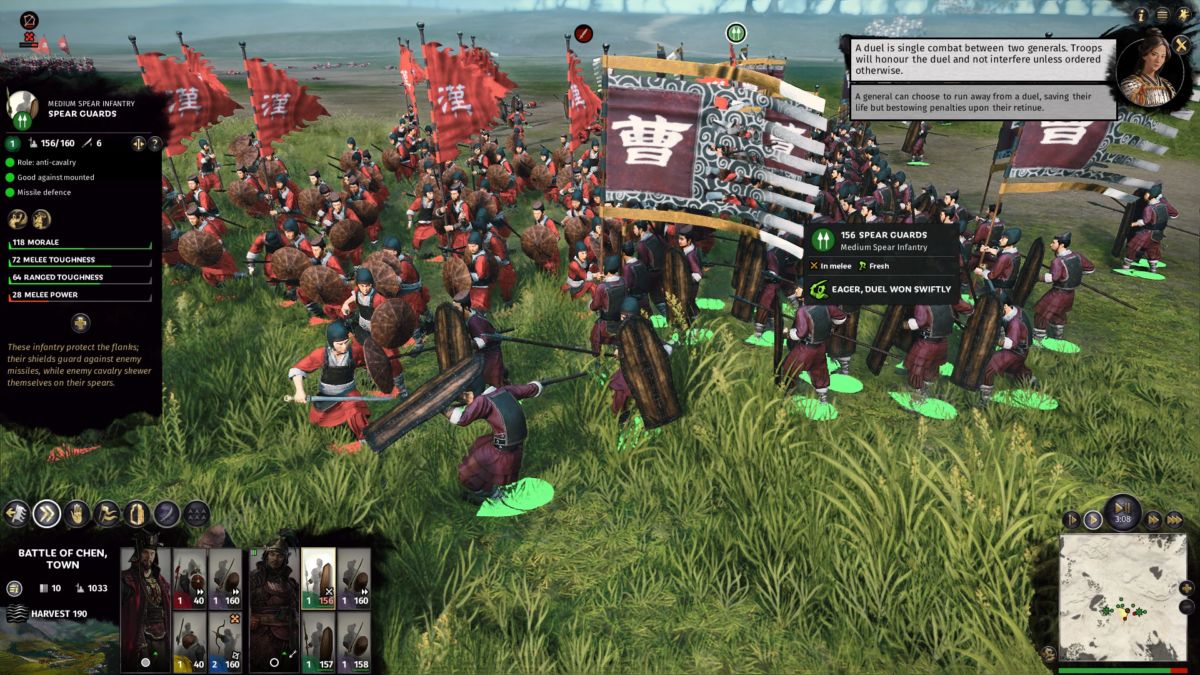 The troops on the field also behave much better than before. Units take logical routes to get to their destinations, even keeping formations along the way. Nuts, I know. Most impressive though is that they can even manage to traverse the bane of any Total War army- cities. Yes, you can actually send an army into a city without too much trouble or need to micromanage everything this time around.

The cities and maps are massive as well, giving you a lot of room to maneuver and set up ambushes. There’s a lot more variety in how the maps look which is very welcomed after Total War: Warhammer’s much more repetitive and cramped maps. This time around the maps simply feel like actual locations and battlefields. 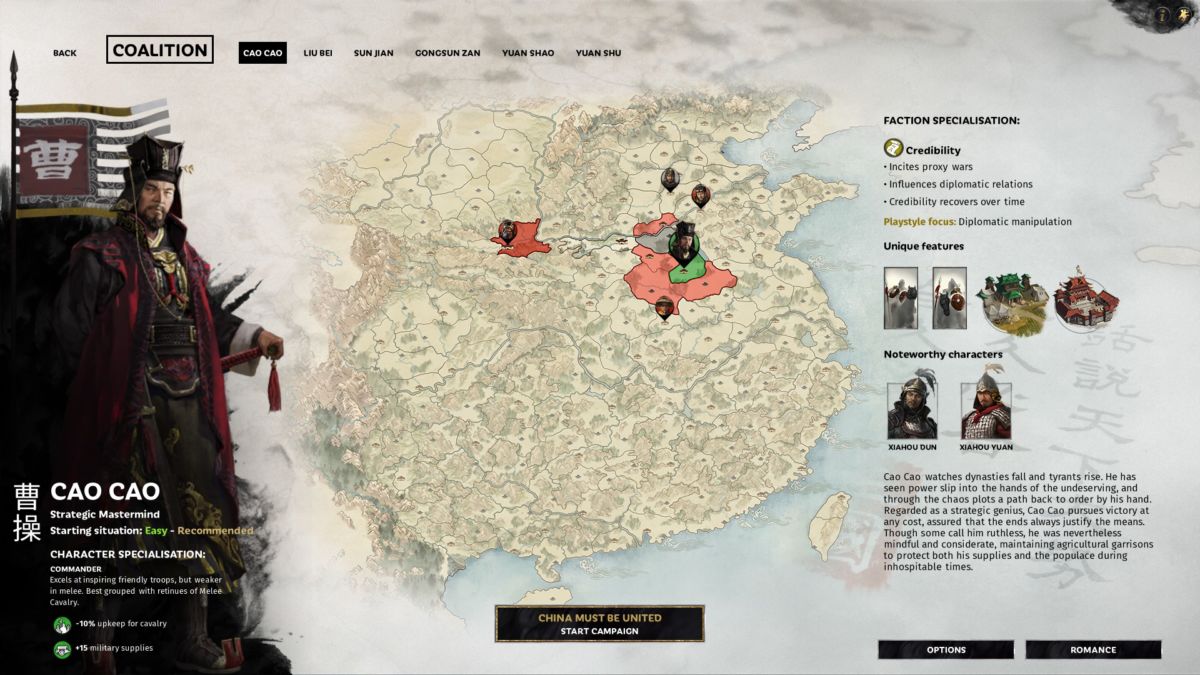 The only thing I could think that isn’t great is that the UI can sometimes be a bit busy. At times you will have several different infoboxes open at once and it can be a bit much to keep track off. It’s such a minor thing though that is dwarfed by the amount of excellence that you find in this game.

Total War: Three Kingdoms is a fantastic game. For the first time since Shogun 2, we have a Total War game that fires on all cylinders. Everything from the revamped diplomacy to the way that the campaign intertwines myth and legend into the historical backdrop feels fresh and incredibly fun to play. Three Kingdoms lets you relive and retell your own Romance story, and if that’s not a key selling point, I’m not sure what is.

Verdict
Total War: Three Kingdoms is the best the series has been in a decade. By emphasising on characters and their relationships, each campaign feels like an epic narrative of friendship and betrayal.
9