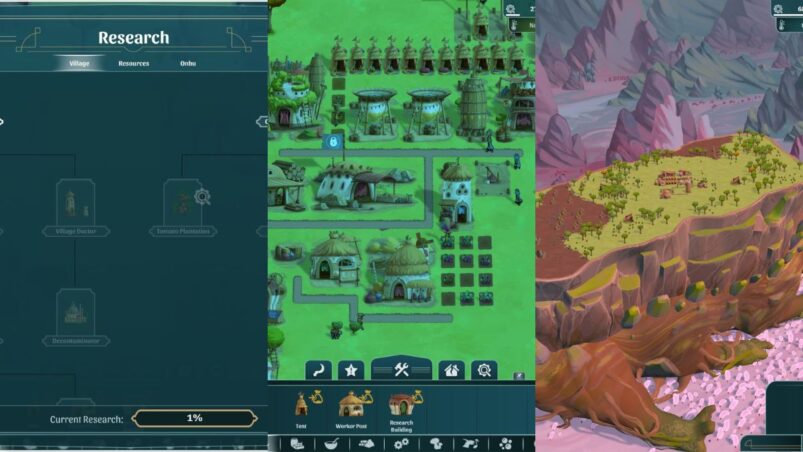 The world of The Wandering Village is filled with unknown dangers that’ll test the resilience of your people and your ability to adapt to these challenges. If you’re not ready to face these challenges, they can easily overwhelm you and bring your playthrough to a sudden and poisonous end. Here’s a collection of helpful strategy tips to get you started on your journey.

The game’s city builder component has a healthy dose of survival elements as you struggle against changing weather and shifting climate conditions, as well as the growing toxicity of the land you traverse. The more tools and abilities you have at your disposal will help make dealing with new situations easier.

Moving onto specific technologies, one of the first technologies to beeline towards is the scavenger hut, which comes after you research the kitchen. While the Onbu may have plentiful resources on its back, they alone aren’t enough to ensure your success. The scavenger hut will let you assemble scavenging teams to range out to locations on the strategic map and bring valuable resources or even trigger events and dilemmas that could lead to further useful bonuses.

Aside from the basic needs for construction materials, such as wood and stone, as well as food to keep your people going, expanding your village is perhaps the most crucial to your long-term success. The more people you have, the more buildings you can operate and the more resources you can harvest and carry to your construction sites. Pay close attention to the strategic map and steer the Onbu towards nomad parties to pick them up and augment your town with increased labor.

In terms of scavenging priorities, settlements, both standard and ruined, as well as shrines are at the top of the list. Settlements will oftentimes grant you new people to join your village, which is usually never a bad thing, while ruined settlements can also yield more workers or other valuable resources. Shrines are also important to look out for as they give you guaranteed knowledge, a resource necessary to unlock advanced technology and commands for the Onbu.

The earliest stages of the game are the most crucial in setting up a functioning village and sustainment engine that’ll keep your people productive and happy. You do start with a decent chunk of resources at the beginning of the game, but you’ll quickly need more to keep up the settlement expansion. Before you place down any buildings, it may be wise to look across the Onbu’s back and find an area to begin construction and then harvest that entire area of resources so that you have a steady supply of building materials and free space to build.

Take Care of the Onbu

Though the Onbu may have let you climb onto its back in the opening cutscene, it doesn’t immediately trust you, so giving commands to it once you have a hornblower will have little effect. Ripping out its spikes for stone and drilling into its back for resources will also hurt its trust in you. The lack of any trust between your people and the Onbu means it’ll choose a path randomly to take, which may inadvertently maneuver you into a biome with harsh weather and toxins.

Interacting in a friendly manner with the Onbu definitely has its benefits, but it’s most effective to make a concerted effort to increase the creature’s trust in you and then immediately unlock the ability to give it commands. For this task, you’ll need to research and build the hornblower, mycologist, Onbu kitchen, Onbu doctor, and feeding trebuchet structures. The Onbu doctor is the most critical piece in the puzzle as it’ll allow you to pet the Onbu to give a massive bonus in its trust of you once you’ve researched the appropriate technology.

Though nearly every building you’ll ever build in The Wandering Village has its uses, given how much climate conditions and disasters occur, you may not need every building active at all times to free up precious labor for more critical tasks. As such, it’s wise to simply deactivate buildings that have no use in the given weather, so that workers take up other tasks. This point is especially important for farms that grow different types of food that are best suited for a particular biome or temperature.

Prepare for the Future

As you wander across the land, the game will progressively throw new challenges at you and at increasing rates. The most common of these are shocks to your food and water production. To mitigate serious damage from these events, storing vital resources such as prepared food and water for farming as soon as you can is key.

On the topic of preparing for inevitable climate shifts and extreme weather, another set of high-priority items to research is new sources of food, such as cacti, corn, wheat, and even tomatoes. Each food has its own ideal climate that it prefers, so having a diverse portfolio of production chains ready to activate will ensure you approach sudden climate change flexibly and with minimal damage to your system.

Perhaps the most dangerous challenge you’ll face is the invasion of poisonous and toxic plants onto Onbu’s back. These will happen when you enter biomes with a higher rate of air toxicity or when passing through spore clouds that’ll seed dangerous growths that’ll eventually start corrupting the land, the trees, healthy plants, and even the Onbu.

While in the later stages of the tech tree you’ll gain the ability to fight back against poisonous growth with fire and specialized decontaminator workers, early on you have only one option to deal with poisonous plants and that’s to cut them down before they get out of hand. To do this, you’ll need to manually mark every single toxic plant with the harvest tool to notify your workers to go out and cut them down. The sooner you do this the greater the chances you avoid any significant damage.