The Wandering Village: How to Increase Your Population 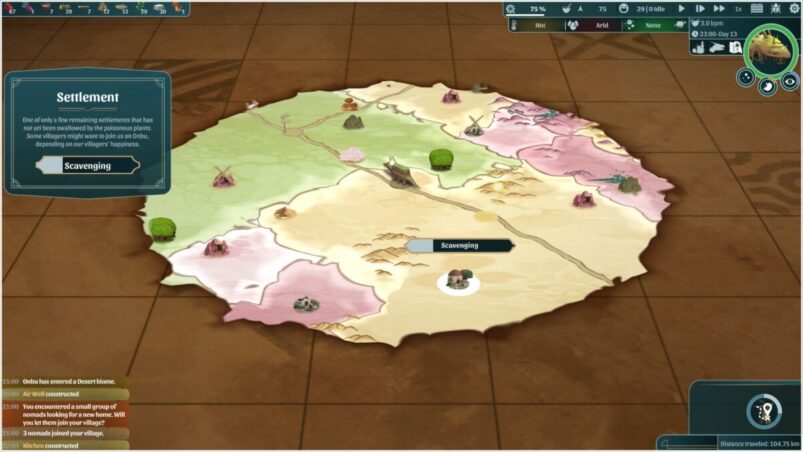 Scavenging a Settlement in The Wandering Village

Of all the resources at your disposal in The Wandering Village, population is the most important. The more people you have, the more buildings you can operate and the things you can do, including taking care of the Onbu or scavenging.

Population itself is a scarce resource in this city builder game and it’s relatively uncommon to come across sources of new people. This makes every opportunity to bring in new people into your village all the more impactful and valuable.

Your people don’t reproduce in The Wandering Village, so the only way you can bolster your ranks of workers is to rely on outside sources. The first and simplest way is when the Onbu walks onto a location where there’s a waiting party of Nomads.

A pop-up will ask you to invite the nomads to join you or send them away. Be wary, though, as you progress through the game these nomad groups can have hungry or poisoned people with them, so be ready to take care of them if you bring them on.

Until you build the Hornblower structure and make the Onbu trust you, it’ll take random paths at crossroads, so you may unwillingly avoid these precious parties of nomads. However, once you’ve partnered with the Onbu you can then use Hornblower to give directions to the creature and take you on the paths that’ll grant you the most amount of population.

Some nomad parties may be considered a roving band on the strategic map and will only join you if you cross paths with them. This is where again the Hornblower and trust from Onbu can come in handy, so that you can maneuver your wandering village to pick up these aimless stragglers.

The second method of increasing your population is to scavenge settlements and ruined settlements, with the former being the likeliest to yield a fair number of new people for your village. Ruined settlement are far more random in their rewards and, as such, are not the most reliable way to bring new people into the fold.