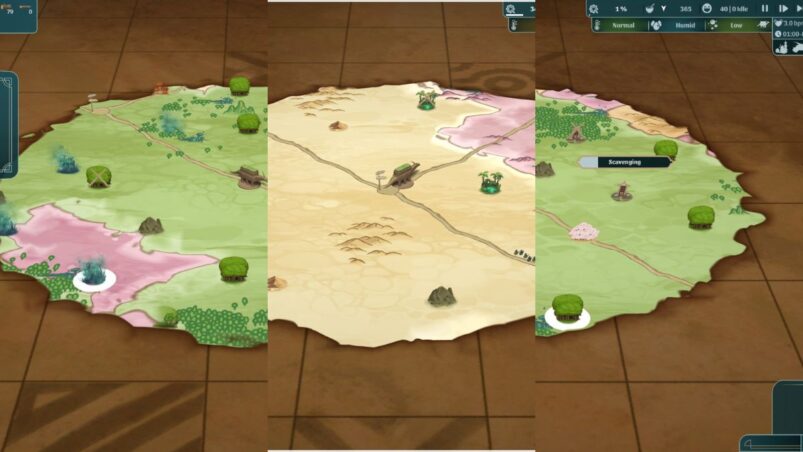 The Wandering Village tasks you with founding a prosperous settlement atop a colossal mythical creature called an Onbu, with its back so fertile and vast that it can hold an entire town. At the beginning of the game you’ll find many resources nearby that’ll help you get started. However, it’ll quickly become apparent that it’s vital to range out beyond your humble town and scavenge resources to help your village grow, develop, and face increasingly difficult challenges. Here’s everything you need to know about scavenging locations in The Wandering Village.

Each of the three biomes — lush, desert, and cold — have their own locations that you can send scavenging parties to. These locations will typically yield you some resources or present you with an event or a dilemma that may require stored resources to fulfill.

Forest locations can be found in the green-colored lush biome. The most common resources you’ll find in this location are wood and mushrooms, with the former needed for construction efforts and the latter to feed the Onbu.

Occasionally forests may trigger a special event that could net you more unique resources, so it may be worth the risk to wade deeper into the forest to find greater riches.

Unlike the forest location, quarries can appear in any biome with varying degrees of frequency. Quarries will typically yield stone, needed for construction, though occasionally you may find some iron Ore, which is useful for building advanced structures. However, they do have a much-reduced chance to trigger a special event even when compared to forests.

Mines typically appear in the cold dark pink biomes but can yield more valuable late-game resources, such as iron or even a little bit of glass. In addition, mines have a decent chance of triggering a dilemma as their tunnels and caverns can lead to all sorts of secrets.

The oasis location can only be found in the gold-yellow desert or hot biomes, as is typical for such geography. Oases meet your need for water, which is especially important in hot biomes as your air wells will be practically useless and you’ll need to find alternate sources of water.

Settlements will typically appear in decent numbers in the lush biome, though may occasionally appear in the other two. This location has a high chance of granting you additional population and also there’s a moderate chance of triggering an event that may require a resource expenditure.

Ruined settlements are the wildcard scavenging location as you have the widest range of possible resources to access. This could be survivors, construction material, food, and even events that could lead to further benefits. These areas can be found in most biomes, though usually are most common in lush biomes.

As the name implies, sand dunes can only be seen in hot biomes and they’ll net you sand as a resource. By itself, it’s quite useless, but sand is needed for the glassmaker structure, a critical structure in the later stages of a playthrough.

As you move through the strange landscapes of the world, you’ll start encountering biomes with greater levels of toxicity. As a result, some forests transform into poison forests. You can send scavengers out and they’ll bring resources back, but they’ll likely be poisoned in the process and may even trigger the spread of toxic plants across Onbu’s back, which can be catastrophic if not dealt with quickly.

Finally, the shrine. Just like the quarry, you can find the shrine in any of the three biomes. Knowledge is crucial to researching advanced technologies, so be on the lookout for shrines.

How will you integrate scavenging into your survival strategy and research path?