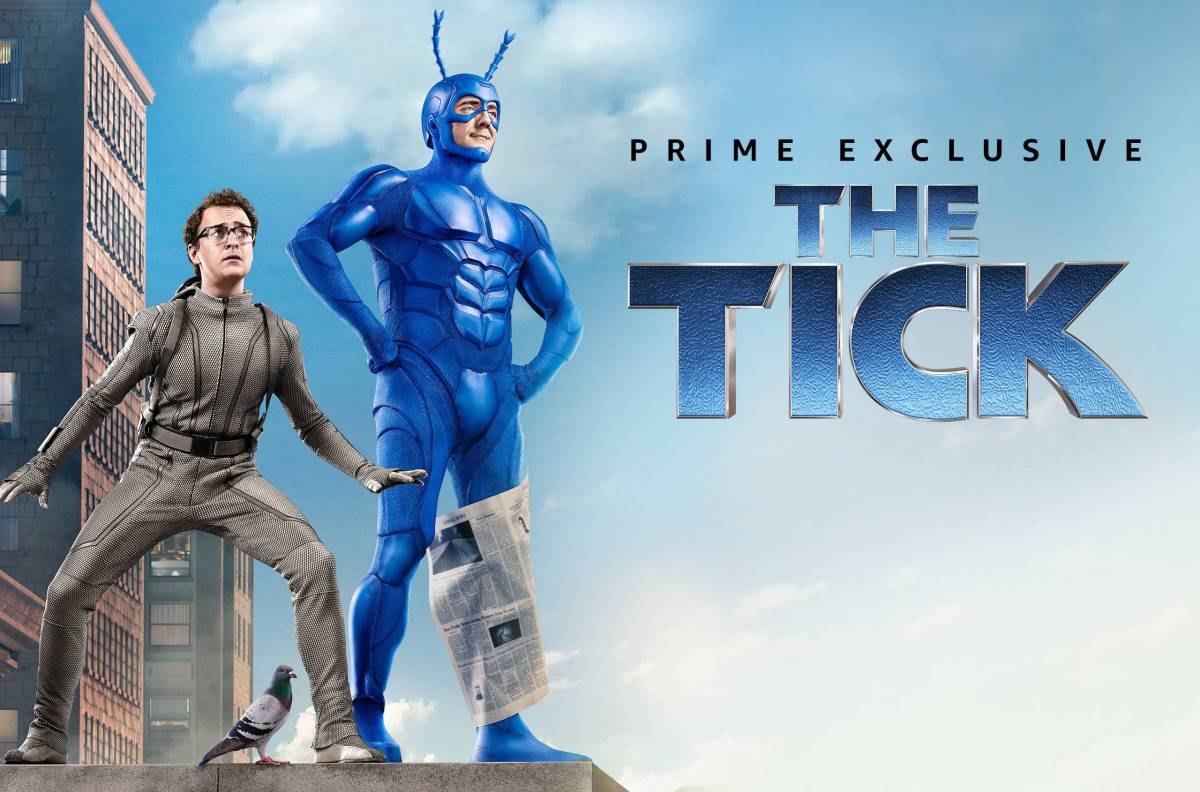 Last year, we were gifted with the pilot episode of Amazon Prime’s new, exclusive adaptation of The Tick, a show based on a 1986 comic book by Ben Edlund. The pilot proved popular with both fans and critics, enough so that Friday saw the release of the first six episodes of the first series, complete with a shiny new Tick suit, and an updated pilot which added extra scenes for fans to burrow into.

The show features Peter Serafinowicz as The Tick, Griffin Newman as his sidekick Arthur, Valorie Curry as Arthur’s sister Dot, Jackie Earle Haley as The Terror, Yara Martinez as Ms. Lint, and many, many more great actors who all help to bring the world of The Tick to life.

Fans of the pilot will be pleased to hear that the new episodes within the series follow the same sense of humour that the pilot did, though the levels of fun have been amped up to include even more silly situations and exclamations of sentences that would be catchphrases were they not so confusing. A good deal of the humour is still centered around Tick finding every new experience to be exhilarating and enthralling, whether he’s disarming a supervillain or finding a new way to eat rice. It’s incredibly endearing, especially coming from the main protagonist in the superhero genre–one we’ve come to associate with being darker and grittier than many others–and manages to make you smile without coming off as overly saccharine or forced.

The show’s two main characters–Arthur and The Tick himself–are just delights to watch on screen: their conflicting personalities play off one another perfectly, and they both have strengths and weaknesses which help them to defeat the villains and antagonists who threaten them. Arthur is deserving of multiple articles (watch this space!) about his struggles with mental illness, and how those around him react to his mental state. Whilst I don’t want to spoil anything for those of you who haven’t yet seen the series, some characters are more sympathetic to Arthur than others, and The Tick manages to be incredibly encouraging and supportive towards his new sidekick at all times, even when he’s dragging Arthur into potentially deadly situations.

The antagonists of the series continue to grow and develop too, and the story behind The Terror is one which becomes darker and more tragic–something which is only emphasised more by the fact that the hero we’re trusting to fight against evil is a confused man in a big blue suit who has an almost child-like appreciation of everyday experiences. The evil in The Tick manages to stay evil: it’s simply the characters who surround that evil that provide the humour, which is part of why the show works so well.

The thing about The Tick is that it really shouldn’t work. It’s its own strange blend of not-quite-parody comedy, where ridiculous characters are thrown into a depressingly serious and bleak world. The Tick is both a satire of the superhero genre and a world which asks you to take its insane, surreal characters seriously when they need to be serious, and it should all be too confusing and convoluted to work. And yet it does work, time and time again, from the original comics to the TV series, the animated series, the film, the follow-up comics…and now the new Amazon original series which is my favourite adaptation of The Tick to date. It’s silly, and heart-warming, and oddly uplifting, and you’ll be left yearning for more after the half-series ends. But the good news is that the next few episodes of The Tick are scheduled to be released next year, so we don’t have to wait too long for more blue heroics.

Verdict
Funny, silly and idiosyncratic as heck, The Tick is something special. If you don't have an Amazon Prime account, get it just to check out this series. Spoon!
10
Cultured Vultures is a pop culture website established in 2013 covering all things gaming, movies, and more. We eat your words.
All The News On The Biggest Games