Especially on PS5, thanks to the DualSense, 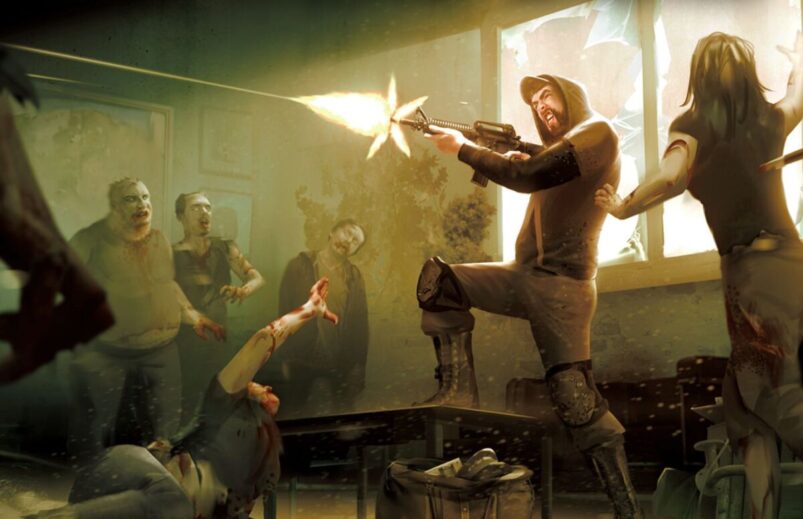 Aftermath takes place in a world where only 5% of the world survived a global catastrophe by holing up in The City, the safe place where you begin, with you being sent out to find “something” else than the hopeless spot you find yourself in. Nobody knows what it is, but it has to be “something”. The twist? You’re dying and slowly turning into the other 95% of the planet, zombies that range from the Romero shufflers to hulking beasts. Once you’re dead, it’s the next survivor’s turn to make the most of the inevitable.

What this means in terms of gameplay is a constant race against the clock to explore and uncover as much as you can while your maximum health constantly drains, replaced with new powers from the infection. As your health bars bleed out, you will instead be able to deal more damage, slam into enemies, and much more as the virus begins to take a hold of your body. However, the enemies get bigger and badder as you venture further and deeper into the wasteland too, so while you’re more powerful than ever, you’re also weaker with you dying in fewer hits.

It’s a really fascinating mechanic and clever bit of design that makes each run unique and a constant balancing act, though you’re also able to acquire Antiviral that will slow down its progress. You’ll constantly be scavenging for the Antiviral in-between also scavenging for ammo and supplies, with The Last Stand: Aftermath also having a crafting system that asks you to experiment with random items to see what works. There’s even a permanent upgrade system where you use Knowledge to unlock skills and upgrades that subsequent survivors can use.

Surviving isn’t easy, though. Resources are finite, with you having to scour every inch of every house in every location on the road to have any chance of lasting long. Even finding fuel for your car often results in battling through loads of zombies, who aren’t too challenging on their own but can cause real logistical headaches when they group up. Melee weapons break easily, so you will constantly be doing your best Joe Baker impression, punching away at creeps, but there comes a point when you just have to start blasting.

The gunplay is also surprisingly snappy and tense for an isometric game, with the DualSense’s features really ratcheting up the drama. You know you have to conserve every bit of ammo you can, so the tension when pulling on the trigger with R2 gives you a second to pause and question whether you really need to spend the bullet. Likewise, getting surprised by an enemy and having to hammer down R2 may mean you spend more ammo than you can really afford. It’s not as flashy as Ratchet or as inventive as Astro, but The Last Stand: Aftermath has still provided some of my favourite uses of the DualSense so far.

However, while The Last Stand: Aftermath has a bigger budget than its predecessors, it still doesn’t have a big budget. There’s no voiceover for dialogue and the story takes a major backseat to the addictive gameplay loop, and there’s just lots and lots of bugs throughout. Zombies always get stuck on the environment, hitboxes are inconsistent at best, and the game has loading screens for <1 second and then just goes to a black screen on PS5, for whatever reason.

There are also some design choices that leave me scratching my head in The Last Stand: Aftermath. You can barely carry a thing without needing to upgrade, so you’ll spend forever and a day moving stuff around in your backpack that you apparently stole from a child. Elsewhere, you can only shoot on an absolutely straight line, so if a zombie is on even the slightest of inclines, you’ll completely miss them. And while it’s good to have options, there are some upgrades that feel beyond situational — nothing quite like Cyberpunk’s infamous water takedowns, but still not great.

Even though frustrations with The Last Stand: Aftermath keep piling up the more I play, I can’t help but be drawn to its loop. It is so close to being the perfect zombie game in a lot of ways, a tense and fulfilling roguelite with a surprising amount of depth that really focuses on survival and isolation better than most of its kind. If you’re looking for the rough but ready lovechild of Hades, State of Decay, and Project Zomboid, you might have found it here.

A PS5 key was provided by PR for this coverage.

READ NEXT: The Last Stand: Aftermath: How To Increase Max Stamina