The Jurassic League #1 Capitalizes On Dinosaur Fever With Campy Fun 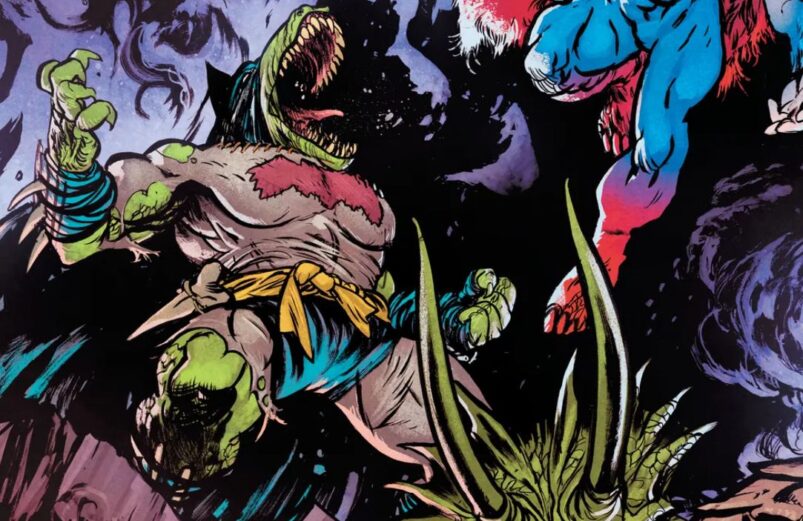 What if someone took the Justice League members and reimagined them as dinosaurs? While the premise sounds ridiculous, the execution somehow works in the new DC Comics issue, The Jurassic League #1.

Justice League members Batman, Superman, Wonder Woman, and Aquaman receive a dino-makeover in the first issue of the 6-issue comic miniseries from writer Juan Daniel Warren Johnson, co-writer and artist Juan Gedeon, colorist Mike Spicer, and letterer Ferran Delgado. Whether intentional or not, the publication of The Jurassic League comes at an apt time, only weeks before the upcoming Jurassic World Dominion film.

Inherently, dinosaurs should be viewed as fearsome creatures to be revered. Yet, we are so far removed from even comprehending their co-existence on Earth, that they’re a fun novelty as far as entertainment is concerned. The Jurassic Park franchise centres on dinosaurs in thought-provoking films full of camp. Also, superheroes became popular for many similar reasons. Comic superhero stories have always sprinkled profundity within their central conceit revolving around campy heroic antics, so mashing up the campy goofiness found in both idealistic dinosaur and superhero tales seems an appropriate route for a modern comic.

It should be noted that there are so many ways this comic could have exploded as a meteoric disaster. However, in the hands of this acclaimed comic creator team, The Jurassic League #1 proves itself a scintillating force of nature in the comics sphere.

The first installment in this roaringly great series leans into self-aware humour when introducing our dinosaur protagonists in the B.C.E. era in Earth’s history, as notable DC superheroes adopt Jurassic counterparts. Here, prehistoric T-rex Bat Walker hunts for the murderous Jokerzard in the dark outskirts of Growltham City. Blackmantasaurus threatens the dino-Aquaman savior of the waves in a battle beneath the sea. In Trymyscira, Princess Diana’s analog Wonderdon dreams of forging a team of superheroes together, envisioning a safe future for her fellow Triceratops. And rounding out our final introduction to this saurian-themed universe is the alien brontosaurus Supersaur, who aids and protects the homo sapiens in Metraaaghpolis.

The comic plays to the familiar characterizations and backstories of the characters through four short segments spotlighting each of our four heroes. Their names are revealed through large fonts exploding on the page, calling back to the nostalgic camp inside old Gold/Silver Age comics. Throughout, the comic embraces this nostalgic atmosphere; this old-school style where the sincere and the absurd fuse into a blender bottle of whole-hearted fun.

Media such as Jurassic Park, Night at the Museum, the ridiculously funny “Dinosaurs” television show, portrays dinosaurs as both formidable and amusing creatures. In Jurassic League, readers are treated to a perfect blend of cartoonish comedy and gory ferocity coming from this soon-to-be league of powered dinos.

On the darker side, the carnivorous Bat Walker engages in a bloody battle with his sworn enemy, Jokerzard. The gruesome violence mixed with heart-wrenching flashbacks reinventing Batman’s iconic origins will surprise readers. Like the Jurassic Park or Jurassic World films, the comic doesn’t shy away from presenting the ruthless side of these beasts. But on the opposite end of the spectrum, there’s no shortage of light-hearted moral goodness when it comes to Supersaur. The Jurassic League #1 dissects the distinct personalities of its diametrically different group of heroes in a way that understands its characters.

Artistically, the comic captures the dynamic movement of its fast-moving predators and prey. Close-frame panels enhance the grandiose nature of the space these dinosaurs occupy. The aesthetics at play here are soothing, energetic, and attuned to the divergent emotional tones underpinning each character’s specific stories.

Aside from the brilliant superhero-as-dinosaur redesigns, some of the most impressive art lies in the settings. Colorist Mike Spicer splashes twilight hues of the sunset when Bat Walker stealthily hunts for his enemy. Vivid, bold colors make a splash in the detailed underwater panels with Blackmantasauras and the Aquaman dino counterpart. And in Trymyscira, the all-female island adopts the recognizable elements from Wonder Woman comics and transforms them into Stone Age-appropriate items. It’s the small details and gorgeous color palette that amplify the cinematic quality of the comic.

The Jurassic League #1 expresses the creators’ passion for the material. They go all-in on the dinosaur aesthetic and pour love into every minutia of detail, so evident through the interplay of sparse dialogue and storytelling artistry in the comics medium. These are popular superheroes whose stories have been told and retold time and time again in comics and film. Inside this comic, you’ll enjoy the familiarity of the character designs and storylines while reveling in the surprising twists that subvert the familiar. It’s a labour of love to reinvent the wheel without completely deviating from the source material influencing these ideas.

Jurassic World Dominion is bringing back its original core members from the first film that began the franchise. In the same vein, The Jurassic League reminisces on the old, campy comic days where superheroes shouted their names in Earth-shattering SFX. Travel back in time to the old-school days of comics where camp and heart are on display in equal measure — The Jurassic League #1 is sure to bedrock your world.