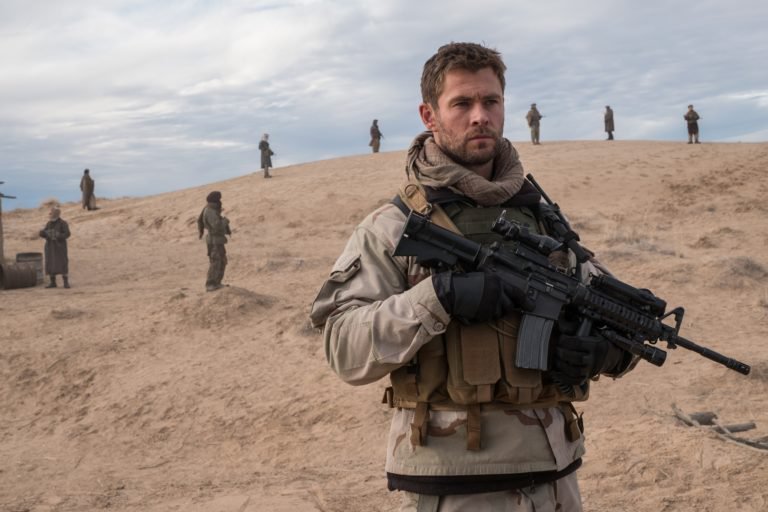 12 Strong may be an action movie that takes place in the Middle East, but make no mistake, it’s basically an old-school Western. There are clear cut good guys and irredeemably evil (yes, evil not bad) guys, with the good guys literally riding in on horses and triumphing over the odds to save not only the day, but a whole country.

It’s a damn good Western though, even as it comes perilously close to a propaganda war movie on the level of 300. Much like that offering, 12 Strong is based on real events, albeit far more recent ones, in 2001. It begins on 9/11, and we get a quick reminder on how quickly our priorities and mindset changed, especially for a team of Special Forces who were immediately deployed to Afghanistan to help take down the Taliban.

The movie knows why we’re here, and after briefly mentioning the group’s combat experience and team leader Captain Mitch Nelson’s (Chris Hemsworth) lack thereof, a few members get the usual kind of thin characterization that establishes them as family men and all-around good guys. Hemsworth is the kind of leader who seems to spring fully formed and prepared to take on impossible tasks, but an actor who spends his time playing Thor is the perfect guy to sell this, and he does it almost flawlessly, with the native Australian ditching his Asgardian accent for an all-American one that mostly works.

He certainly needs all his charm and knowledge for a mission that is a whole lot more complex than it sounds. They’re working with the Northern Alliance, a group of opposed to the Taliban, and sometimes just as opposed to each other. This means Nelson often not only has to be a soldier, but a diplomat who must persuade these people to work together against a common foe.

The warlord they’ve been assigned to work with, General Dostum (Navid Negahban), is quickly revealed to be the kind of wild card they fear will sell them out to their enemies. And Dostum has many reasons to distrust American commitment in a place we are constantly reminded is the “Graveyard of Empires” about as frequently as we are shown no reason to doubt America will be the ones to conquer it…with democracy, of course.

American might is on full display here, with the team calling in bomb drops which sometimes miss the target, but never hit civilians. Dostum and Nelson of course slowly but surely bond, with both sides gradually building the kind of trust that comes with fighting together on horseback against foes armed with some very frightening modern weaponry of their own. 12 Strong makes the most of its shooting location in New Mexico, capturing that feeling of isolation and harshness, with the kind of unforgiving landscape that can shelter enemies, and natural forces that can stop the greatest armies in their tracks.

Granted, Dostum’s development is as thin as that of his American counterparts, but he still gets far more attention, sympathy, and focus than many Middle Eastern people do in movies (not saying much, but still). And if the location is shot well, the fights are incredible, especially the final battle. The problem is that it’s preceded with the usual clichés, like a completely unnecessary scene of the Taliban shooting a woman for the sin of teaching little girls how to read. We hardly need more motivation to despise these people, so such an inclusion feels especially shameless. It also follows a larger pattern of the women in the film, who are depicted as either dutiful wives or victims.

The film’s ultimate triumph at the end also feels like an attempt to silence naysayers who doubt American greatness. A far more complex picture, such as that of Afghan civilians being forced into the Taliban, are mentioned but not explored. Not to mention that what we’ve actually accomplished in the region is a matter of debate. But luckily for the movie, what these men accomplished outshines all the flaws in how it’s depicted. They actually did work with Dostum, who went on to become the Vice President of Afghanistan, and defeated the Taliban in a matter of weeks. They actually did ride in on horseback. And they did all of this to no fanfare, since their mission was only recently declassified. And when you have a cast with the likes of not only Hemsworth, but a few great Michaels (Peña, and Shannon), as well as Rob Riggle, and Moonlight’s Trevante Rhodes, that goes a long way too.

I have also seldom seen an audience so touched by a movie. The woman next to me was in tears, and practically everyone in the theater cheered and clapped when the bad guy finally met his end. 12 Strong may not exactly be what we need, but it does seem to be what audiences desperately want. I just wish 12 Strong was brave enough to take a cue from the real-life heroes they’re honoring and give us something better.

Verdict
A potentially great film about real-life heroes is hobbled by clichés and thinly developed characters.
6
Cultured Vultures is a pop culture website established in 2013 covering all things gaming, movies, and more. We eat your words.
All The News On The Biggest Games