A show about cleaning up crime scenes turns out to be funny - and quite charming with it. 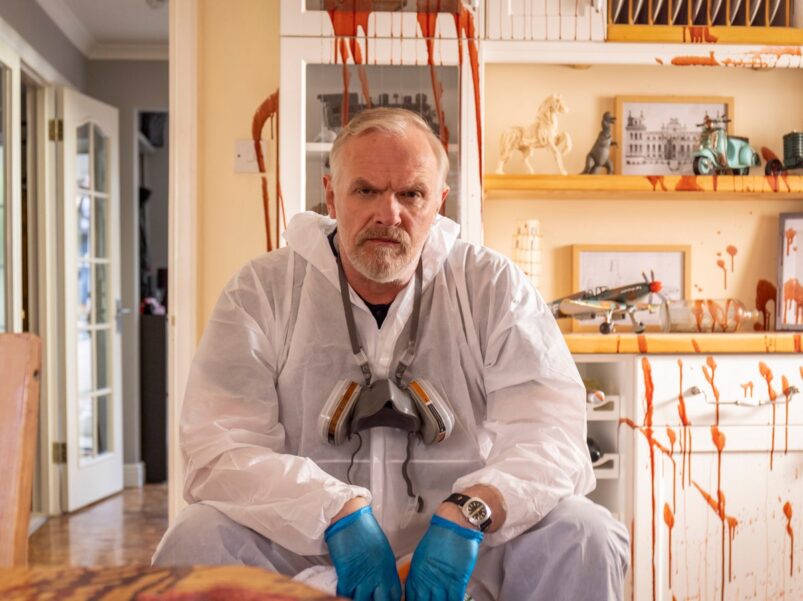 A sparse title like ‘The Cleaner’ might suggest a steel-hard crime show about a tough, tough guy making bodies disappear – especially when you learn that the main character’s literally a crime scene cleaner. Instead, it’s a fairly gentle comedy.

Many of our most treasured comedy setups – a man walking into a bar, a ding-ding-can-I-help you shop sketch – are essentially vehicles to have two strangers meet. Having a crime scene cleaner going into a stranger’s house is just another iteration of this formula, but it’s one that’s got a bit more bite to it, and, dare I say, tends to turn up the ‘strange’ factor of ‘stranger’.

Being about seven feet tall, Greg Davies is something very far from an everyman. And as a fairly intimidating former teacher, he reached what seemed like an apogee role in The Inbetweeners as a fairly intimidating teacher. So, even having written the thing himself, he might not seem like the first choice for the lead in The Cleaner, a put-upon working bloke who is at times almost aggressively ordinary.

The thing is, of course, it’s not just him. The Cleaner is essentially a string of two-handers, so it’s not simply Davies alone, it’s Davies opposite someone. While they’re not all A-listers, it has pulled off one particularly big bag in Helena Bonham Carter – who it’s fairly surprising simply to see on television, let alone on the toilet.

By nature, two-handers like this fly or fall based on the people involved. And frankly, Davies is a man for all seasons here. It starts with him having to work around – to various degrees of awkwardness – this week’s guest, but they invariably end up, if not getting along, then at least engaging enough to riff off each other in a vaguely good-natured manner.

As Davies’s various opposites go, David Mitchell is particularly strong here as a bookish prick, hitting exactly the kind of notes his character in the disappointing Back really should have. The standout, though, has to be Ruth Madeley, who presents Davies a straight-out foil in a way none of his other seconds quite manage, matching him for every beat.

The one duff note is Layton Williams as – sigh – a millennial influencer. As he wails and whimpers and livestreams in his too-nice house, you start to wonder if it wasn’t the wrong person who died. Or, indeed, why Davies doesn’t simply let loose the bad teacher again, slap him round the chops, and tell him to get a bloody grip.

Davies’s character, Wicky, does of course pour scorn on the whole concept of the influencer (as well anyone might), but this cannot help but seem like the show fighting itself. Having included a character it’s obviously contemptuous of, to cry havoc and give them both barrels would be too mean for a show like this, even if they clearly yearn to do so.

But that’s one flawed episode out of six. The only other criticisms I have are at the level of minutiae. A (brief) flashback that wasn’t really necessary, the ostentatious introduction of a priceless Ming vase which doesn’t then get smashed by Chekov’s gun – oh, and a few pixels of a boom mike dipping into shot at one point in the final episode. Nothing, bluntly, that’s going to spoil the experience for anyone.

There’s inevitably a stream of melancholy to The Cleaner, and not simply because the backstory is always ‘someone’s died’ – though that does help. With the anthology-ish format and this darker tint, it often seems a lot like a lighter episode of Inside No. 9 (which also saw an appearance from the magisterial Stephanie Cole, though unlike The Cleaner they didn’t let her go full-on Queen Victoria addressing her subjects).

But it handles the weight of its many corpses well. There’s almost never a dead body actually on screen, only some grisly side-effects. More to the point, the show only gets sentimental when it has cause to – and never goes mad with it, either. And, crucially, doesn’t let this more grounded side of things bring the comedy to a horrible clunking stop. For Wicky, of course, blood-splatters and bone fragments are just another day at the office.

More than once, Wicky faces a genuine moral dilemma – typically when the circumstances of that week’s corpse aren’t as fully explained as the police think. And invariably, whatever temptation there might be, he shows himself to have a solid moral core. This is hardly a necessity for comedy, and especially not for British comedy, with its long tradition of Blackadderish schemers. But here, it doesn’t simply work, it services everything else that’s going on.

If a stranger came into your home, and you ended up relating on an emotional level, you’d want to know that they are fundamentally a good person. Here we do, and so can relax slightly. And it also pays dividends whenever we end up delving into Wicky’s own life – we are not in danger of regarding his own tribulations and simply thinking ‘so what?’.

There is also, of course, a long tradition of memento mori in British comedy. Very often this takes the form of an intimate awareness that the characters themselves have not long for this world, like One Foot In The Grave, or the Peter Cook and Chris Morris two-hander Why Bother? (which was broadcast barely a year before Cook’s actual death). The Cleaner keeps death slightly more at arm’s length – though only slightly.

Here is The Cleaner’s real charm: for any absurd touch or moment of heightened reality it might give us, it all remains relatable. That’s an overused word, but here I mean it on a real gut level. When Wicky is exasperated by Mitchell’s pedantic author, you would be too – and when people are rendered slightly queasy by the leftover mess of a human life, you would be too.

Nobody ever put humanity’s torrid relationship with death much better than Dylan Thomas’s ‘Do Not Go Gentle Into That Good Night’, screaming in the face of eternity. Sure enough, a signed first edition of Thomas turns up in The Cleaner – then gets irreparably damaged, which, in pure farce tradition, Wicky has to hide from the owner. It’s only properly funny when the stakes are real.

READ MORE: 15 Best Comedy Movies on Netflix You Should Watch 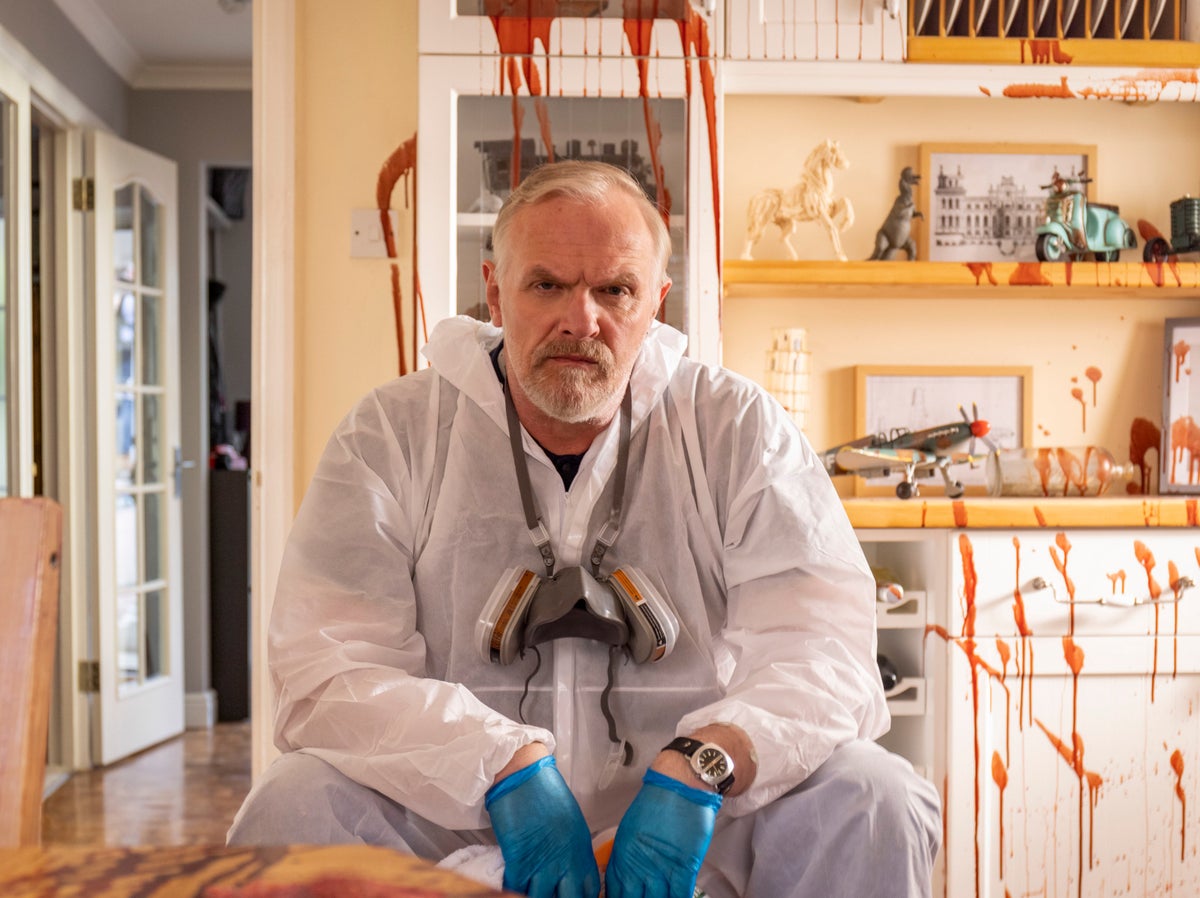 Verdict
The Cleaner is a gentle affair, but never loses its nerve and treats its subject matter with kid gloves. This, perversely, makes it a lot funnier.
8
Cultured Vultures is a pop culture website established in 2013 covering all things gaming, movies, and more. We eat your words.
All The News On Your Favourite Games