Not a fine addition to my collection. 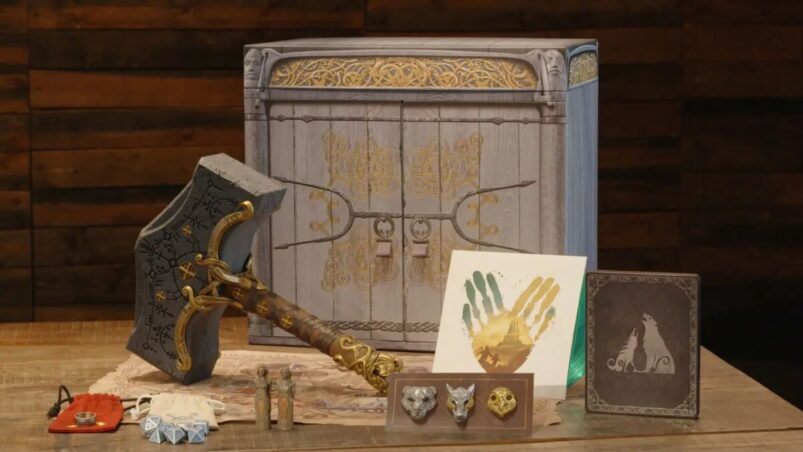 Since the launch of the PS5, Sony has settled into a bit of a ridiculous tradition where they sell special and collector’s editions of their biggest games, but instead of bundling them with a disc for the actual game, you get a voucher instead. Horizon Forbidden West was originally the most notable example, but Sony are set to repeat this weird new trend with God of War Ragnarok.

The idea of selling an enhanced physical edition of a game without including the actual game as part of the package seems to defeat the entire purpose of selling a collector’s edition in the first place. Hell, the God of War Ragnarok Collector’s and Jotnar Editions of the game come with a special steelbook that’d probably look really nice next to your other physical games, but with no disc to actually put inside it, it just seems a bit pointless. Sure, collector’s editions aren’t the most necessary items in the world, but getting rid of the disc from the overall package really weakens the whole experience and makes the Collector’s Editions feel like just merch in a box.

Some might argue that these collector’s editions actually come with a copy of the game at least, unlike some that have been released over the years. Mass Effect: Andromeda’s Collector’s Edition springs to mind, while Sonic Mania’s opted for a code in a box with some cheap manufacturing too, though there have been countless other examples over the years, and while it’s true that offering a voucher is better than offering no game at all, offering only a voucher still feels somewhat insulting to the consumer. Besides, let’s not celebrate Sony for doing the bare minimum, eh?

There’s also a value aspect to consider here too. Offering just a code in a box diminishes the value of the entire collector’s cdition once that code has been redeemed. Not to encourage scalper culture or the artificially inflated reselling market, but removing discs from these special editions of games is going to gut the long term interest in them. It’s likely that Sony, and perhaps other physical publishers too, have moved in this direction because of how the PS5 has been split between the All-Digital PS5 and full fat version. As the name implies, the All-Digital version of the PS5 doesn’t come with a disc tray, which means that players looking to buy the Collector’s Editions of Sony games would traditionally not be able to if they were disc only. They’d be buying games they couldn’t actually play, which obviously wouldn’t make sense for those consumers, so a voucher code for them is ideal.

Those All-Digital PS5 owners shouldn’t be denied a chance to purchase a collector’s edition that offer games they won’t be able to play, but there should also be an option for players who’d rather buy the big physical editions of God of War and other games and still own the game on disc, rather than a voucher. Players are allowed to have a choice when it comes to what kind of console they want to own, so why are they being denied that same choice when it comes to how their games are distributed?

Considering that Sony are creating console bundles with just voucher codes for games instead of discs, it’s clear where their intentions lie regarding digital versus physical, but it certainly seems quite egregious to expect consumers to pay more when there’s not even a disc. There’s less to produce, less long-term value in the product, and Sony games in particular have become the most expensive in the whole industry. With all that combined, it’s hard to see why people should care about their new shiny special editions.

Admittedly, this isn’t the biggest issue in the whole of the gaming industry, not by a wide margin. However, it is indicative of an ongoing shift towards the growth in digital media, to the point where even physical products have begun to fully support digital-only content. Sometime soon, a line in the sand needs to be drawn before most mainstream physical media simply turns into vouchers in expensive boxes.