After all the action, the gang have earned themselves a break, but the forces of evil have other ideas…. 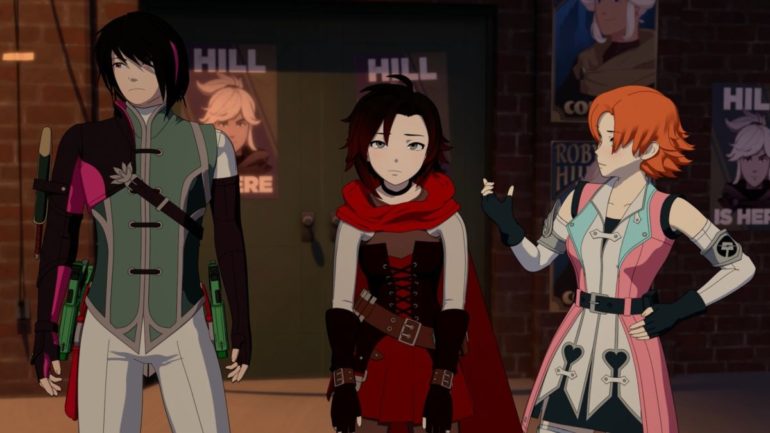 While the past few episodes have been setting the chessboard between the protagonists and antagonists, ‘A Night Off’ shows the villains making a devastating move, though the episode still has time to have a few nice fluffy moments before finishing on a shocking climax.

Obviously, spoilers ahead for RWBY.

‘A Night Off’ opens up with the riots that started in the previous episode being quelled. This is a little disappointing that the audience missed all the action, only being told through a news interview with Robyn Hill about what happened, as most of the rioters were her supporters. This is a classic example of a story telling rather than showing, and hurts the episode a little.

The episode goes back to team RWBY training amongst themselves, with their semblances growing stronger and working better in battle. As their training session finishes up, they are visited by Ironwood and Clover. Here, the audience first sees a projection of the live results of the voting poll between Robyn Hill and Jacques Schnee, which acts as a tense countdown throughout ‘A Night Off’.

Though the projection first starts with Robyn clearly ahead of the race with 70% of the votes, Jacques catches up with her bit by bit. Either way, it’s a scenario which has Ironwood concerned. Though the gang mentions the idea of working Robyn and Ironwood working together to better the kingdom of Atlas, he almost brushes off their suggestions and orders the team to take the night off, considering they don’t know what the next day will bring and he’ll need them “rested and ready for whatever that may bring.”

The gang prepare to unwind for the night: Blake and Yang get ready to go to a dance club with team FNKI, Weiss, Jaune and Oscar go to the movies, while Ruby heads off to Robyn’s victory election party with Nora and Ren. While the rest of the episode follows Ruby, it is cute to see Blake and Yang all affectionate with each other. The same can’t be said for Ren and Nora who at first seem to be tense and butting heads with each other, leaving Ruby awkwardly seeking company elsewhere at the party. During this dialogue, Nora brings up an interesting perspective about Jinn’s prediction to Ozpin about Salem: even though Oz heard that he couldn’t destroy her, maybe there is someone else who could. As she says that, the camera focuses on Ruby. Will she be the one to defeat Salem?

At the party, the projection of Robyn and Jacques’ votes is put up on the far end of the room, continuing to provide tension throughout the episode, hanging over the heroes like a guillotine. Ruby spends the rest of the night with Penny while Nora and Ren continue to argue, with Ren first bringing up that he is glad Yang and Blake are back to being friends, while Nora sarcastically points out “Two people who’ve gone through that much? I don’t think so,” clearly commenting on their own relationship. While they bicker, Ruby and Penny go backstage to speak to Robyn and Marrow, who is acting as security detail for the party. It is still funny to see Penny act all naïve despite being a badass cyborg, jokingly injuring Ruby’s hand when the redhead offers her a fist bump.

However, Robyn and her followers butt heads with Marrow and Ruby, further cementing the tension between Ironwood’s military and Robyn’s followers. Marrow also comments on how Robyn may have done things for Mantle outside of the law’s jurisdiction…look, RWBY does base its characters off of existing fairy tales and legends, and Robyn Hill is a rogue who works for the people and has a crossbow for a weapon. We get it, Robyn Hill is based off of Robin Hood. However, the audience learns that Robyn is an effective diplomat, making the comment that “if I get elected tonight, we’ll all have to learn how to get along.” Hopefully, this will prove a useful personality trait in the future and perhaps Robyn will become an ally to Ironwood, and team RWBY as well.

One of Robyn’s followers and fellow huntresses Fiona Thyme goes on stage to welcome everyone to the party and encourages Robyn to share a few words. Before going into her speech, Fiona and Robyn share a few private words, and Fiona sheds a few tears before giving the microphone to Robyn. Are they just close friends or something more? Additionally, while Robyn showed off her intimidating presence when she confronted the supply run in the previous episode, she comes off charismatic and friendly during her speech, developing her character more. At the end of her speech, Ren and Nora’s tensions finally come to a head, with Nora announcing, “Screw talking!”, pulling Ren for a kiss. Cue all the fans’ hearts bursting.

However, it doesn’t seem all is well: Watts surveys the party from an unknown location while Tyrion hides in at the party. Ruby notices Tyrion’s scorpion tail in the crowd but is too late to react, as Watts cuts off the power in the warehouse and Tyrion strikes, killing multiple partygoers. In all the confusion, Tyrion arranges it so that Penny – who notices him in the crowd and tries to defend Robyn from being attacked – is actually framed for the attack as soon as the lights come back on. Among the injured and dead, Fiona is struck by Tyrion. Considering what kind of Faunus she is, I guess you could call her a sacrificial lamb.

With Penny framed for the attack, Ruby and Marrow are sure to quickly escape the scene, looking like they planned a hit on Robyn. The episode concludes with a broadcast of Jacques celebrating his political victory while the gang flee into a nearby alley, only to hear alarms going off, signalling Grimm attacking the city. Though the ending is shocking, Penny is a robot and at times, the audience sees the events unfold through Penny’s eyes. Hopefully, there is some recorded footage linked to Penny that will help redeem the sweet cyborg.

‘A Night Off’ develops like a snowball: what starts off as small keeps building and building until the final moments of the episode, which will leave fans shocked and wanting more. Though the start of the episode may have been a little weak, the last five minutes of the episode effectively slaps the audience in the face with a twist ending, easily making this the best episode of the volume so far.

RWBY Reviews will be returning in 2020. 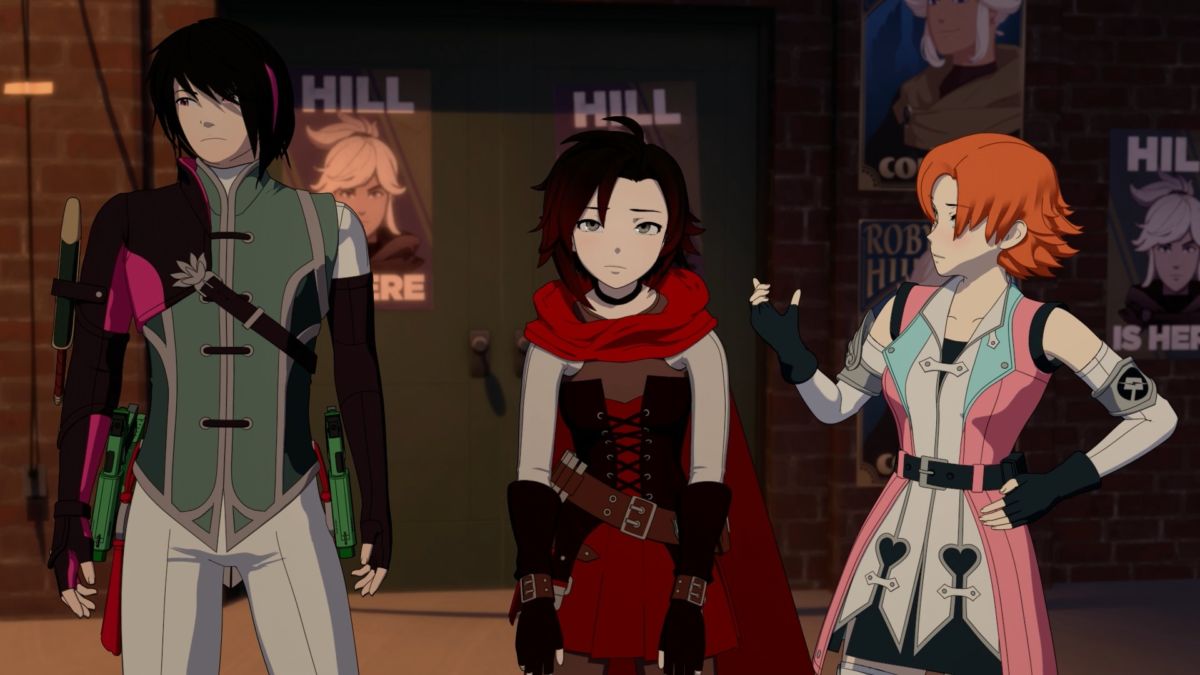 Verdict
A Night Off has a little something for everyone: cute romantic moments for the fans, perfectly built tension, action and a shocking ending that will leave you wanting more.
8.5
Cultured Vultures is a pop culture website established in 2013 covering all things gaming, movies, and more. We eat your words.
All The News On The Biggest Games