River City Girls is a brawler and RPG spliced together to create an amazing and silly adventure that provides a ton of fun. 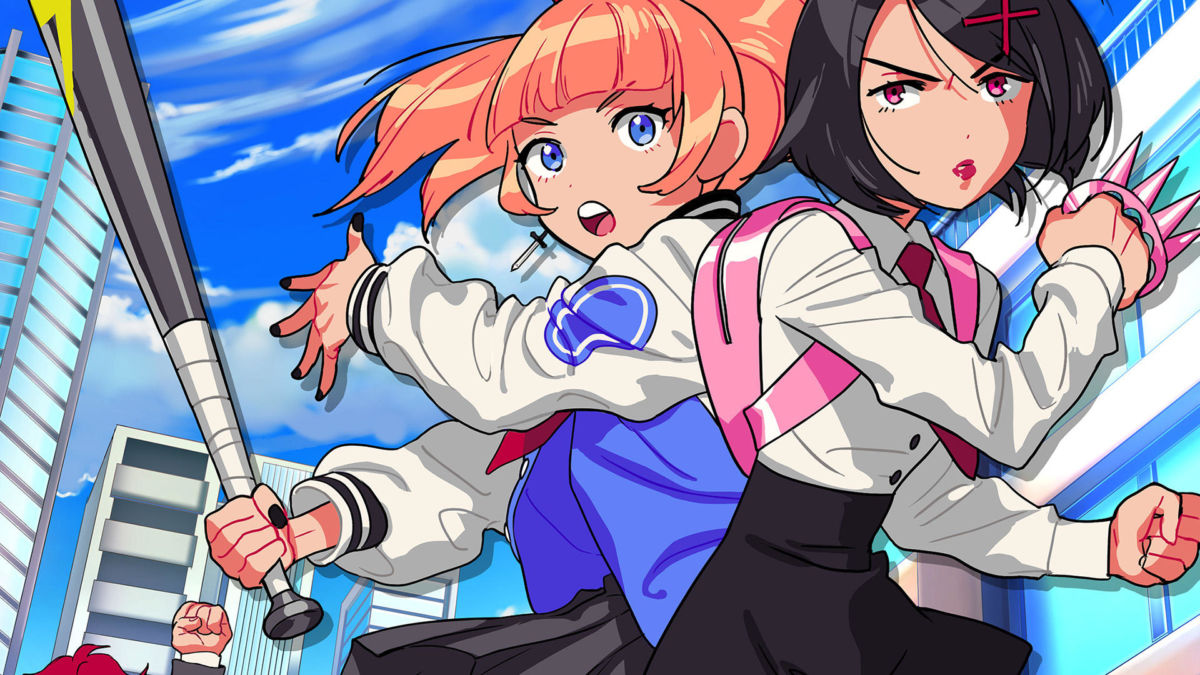 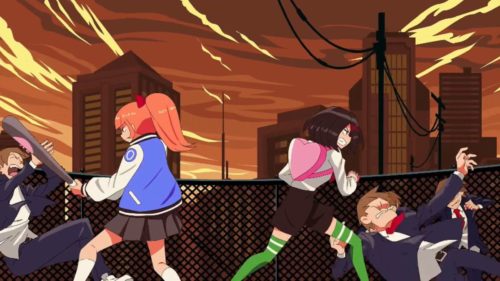 My wife can rescue me anytime she wants to if it turns out this badass. Hearing how she went through an entire city of trained fighters just to get me back would make for a great party story. River City Girls lets me play as two fierce women who are doing just that — the only goal is to rescue their boyfriends, find out who was behind it, and beat the hell out of anyone standing in their way.

Many may not be familiar with the River City/Kunio-kun series, but I assure you it comes with a certain pedigree in the genre. I’m a fan of classic or retro styled beat ‘em ups. Upon hearing that the game was in development I was intrigued, but the trailer had me wanting the game right then. Everything was so vibrant and forceful, demanding my attention, with a story that comes across simply while being so fun. 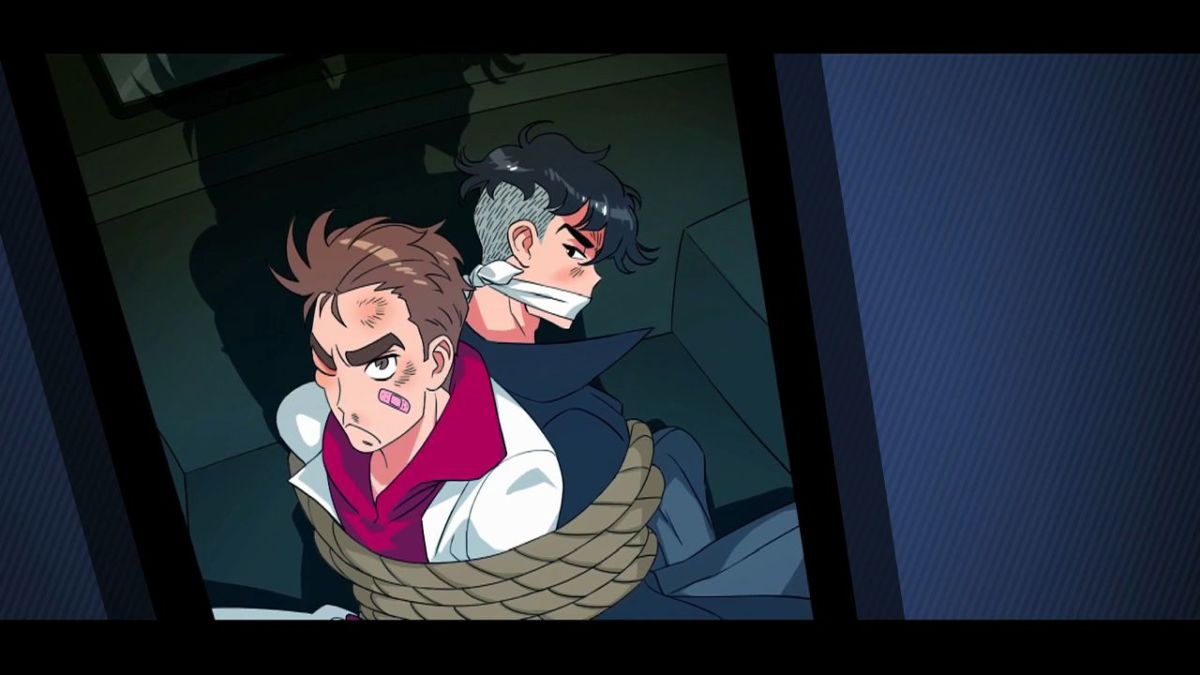 Misako and Kyoko are in detention (not surprisingly, once we get to know them) when they receive a text that their boyfriends, Kunio and Riki, have been kidnapped. Messing with those two boys is tough enough, but now someone has really messed up and angered their slightly possessive girlfriends. The only reasonable course of action is to break out of school, travel across River City to find answers, and lay a beat down where needed until the problem is fixed. It’s the kind of setup that will sound typical, but deserves the chef’s kiss for its directness.

While the narrative may have a few issues toward the end, the game’s presentation does not. The style of the game may feel a bit old for some, but the framework that creates the gameplay is strong, and all of the paint is fresh and stylish. River City seems to still embrace the 80s with its colors and tones, meaning everything is poppin’. All of the backgrounds are visually stimulating while holding a good bit of detail. Character models and animations are well-crafted and the models react with tons of charisma and motion. Both elements combine together to make an aesthetic that looks fluid and engaging. The Japanese manga style, beautiful cutscenes, and realized style are just super kawaii. 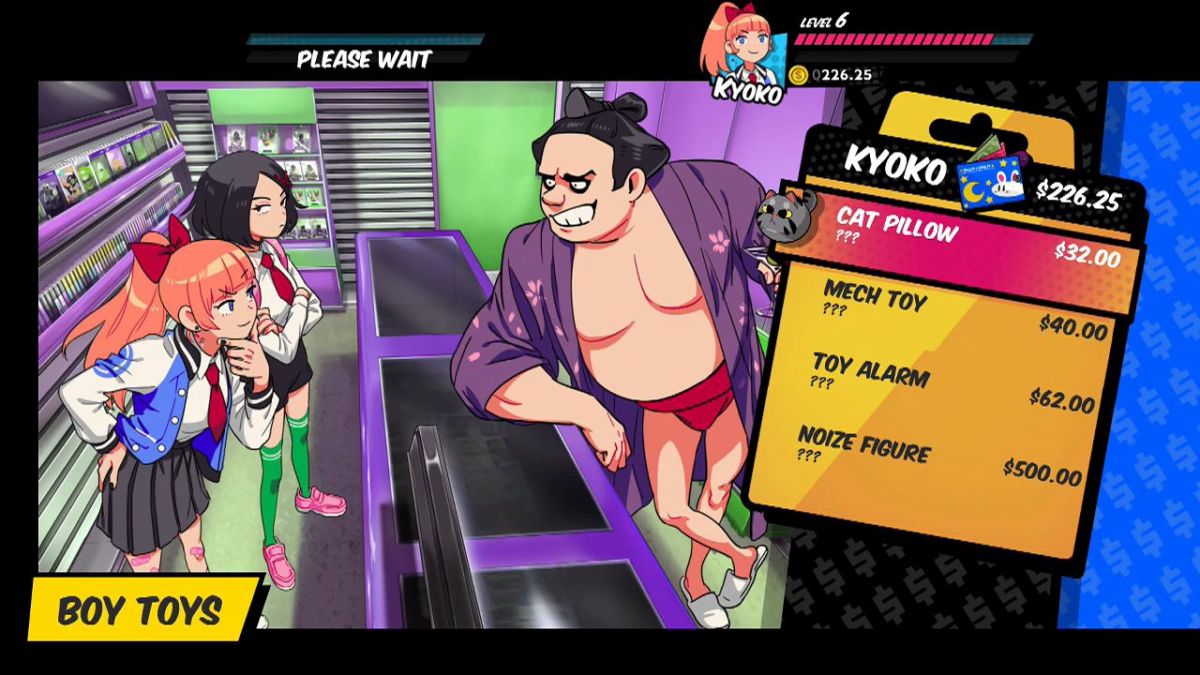 Mix this with a phenomenal soundtrack and it makes the experience feel so lively. River City Girls doesn’t just boast some superb background tunes, but full tracks with lyrics that play in certain sections that feel like the theme songs for these rebellious high-schoolers. Megan McDuffee, Chipzel, Cristina Vee, and NateWantsToBattle all contributed to elevating the audio side above and beyond what I was expecting. These tracks will get stuck in players’ heads, just like the title theme did in mine. This is a soundtrack I’ll be listening to for quite some time.

I have to point out the humor too, as I was caught laughing out loud with some of the cutscenes and lead-ups to boss fights. River City Girls possess a certain lewd humor that isn’t too blunt and lets a joke sit when it needs to while allowing the main characters to still be forward and play up to their archetypes. None of the interactions ever feel too stale and everything is entertaining. There is some great inflection from several of the voice actors, and attentive ears may pick up on a few popular YouTubers and other personalities filling those roles. 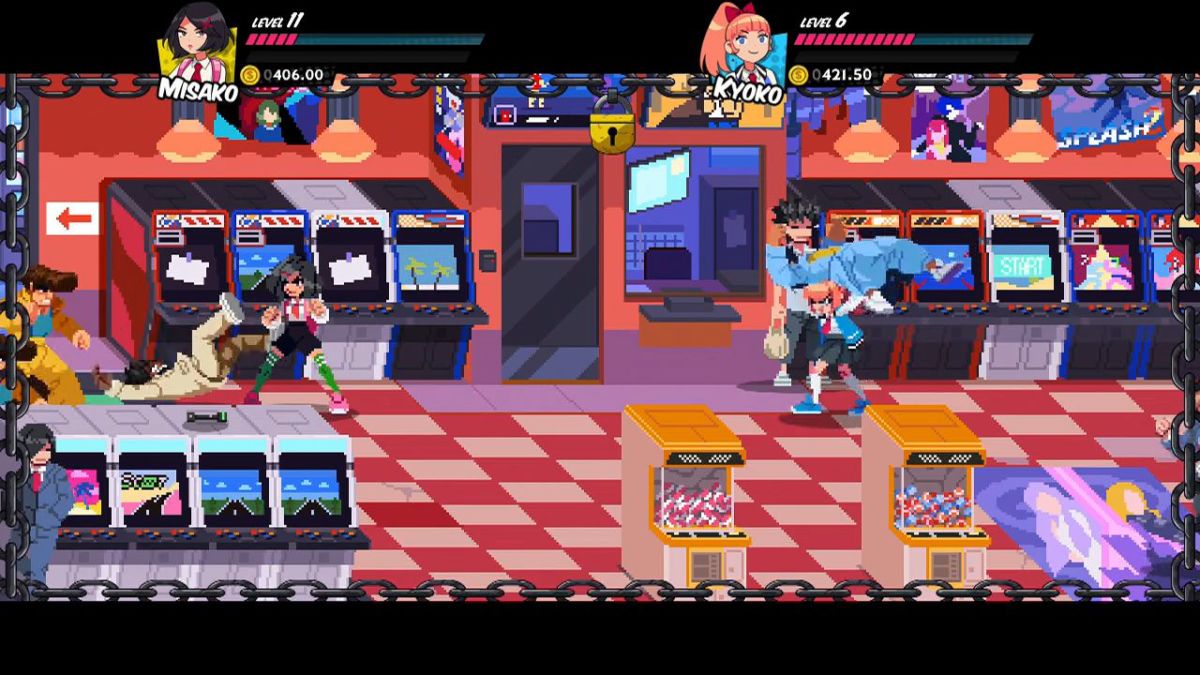 Combat in River City Girls is easy and fun. There won’t be much to learn at first, as the characters may feel a bit limited before upgrades, but downing enemies is satisfying for sure. New moves are unlocked along the way as the character levels and others can be bought at the dojo. A few maneuvers do seem like they should flow together better, but after a bit I barely noticed and learned what to use per the situation. The jump attacks don’t feel quite as useful at first and there is a block/parry mechanic that I should have paid a lot more attention to, but learning certain new attacks just showed that I was right in being the aggressor.

There are some small bits of action platforming to grumble at, but nothing as bad as Double Dragon II. Enemies can be a bit cheap at times and players will often get swarmed, but the game never felt too difficult. I had a little trouble with bosses, but they felt rewarding after learning their patterns, realizing when to attack and the proper times to back off. The girls have to battle through the city and level up to become more powerful. The key is to pick up all of the money fallen henchmen turn into and spend that on food, items that offer advantages, and new moves. Players will have to use the map and backtrack through the six regions repeatedly, re-fighting enemies in each area, but that is more cash and XP. Death will eventually come, but the game is incredibly generous with saving and there are infinite continues, though dying does cost some of that hard earned currency. 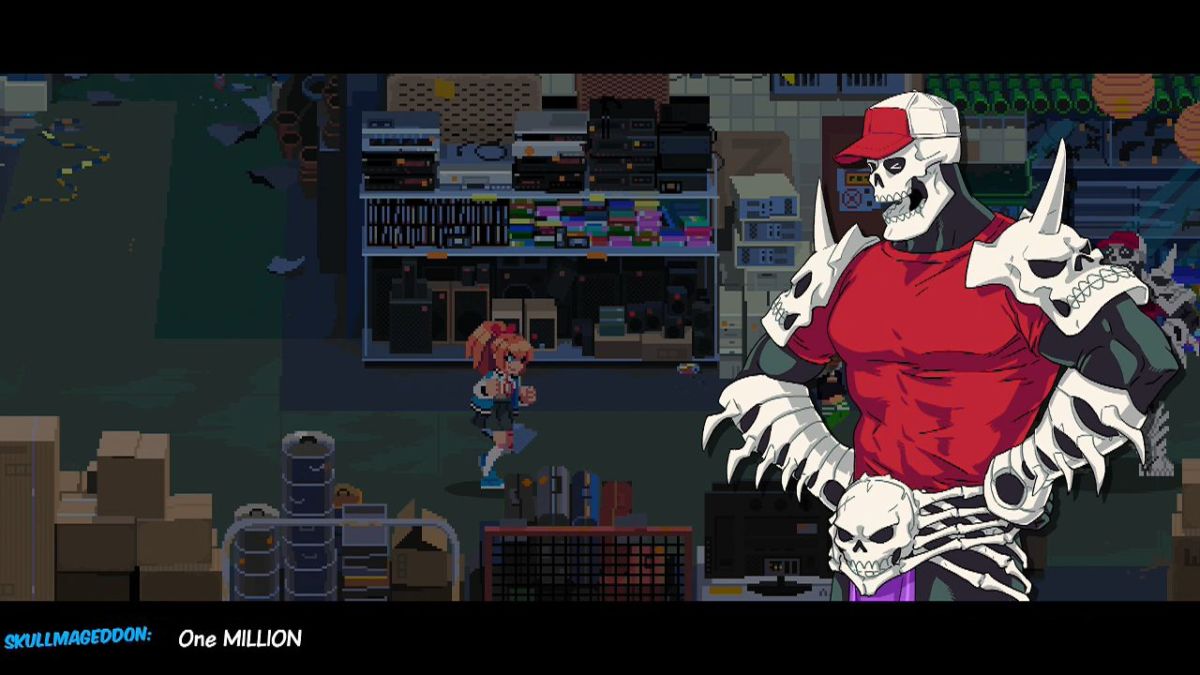 Misako and Kyoko have different personalities and unique attacks to match that as well. They also don’t level together, so single-player completionists will be running through this story at least twice. I prefer the co-op gameplay, especially of the couch variety. In fact, it looks like River City Girls only offers local play, but I have been asking for more games like this to let me play with a friend. The cooperative bare knuckle action made the game even more enjoyable and guarantees that (along with that new game plus mode) I’ll be revisiting River City soon.

The few things I don’t like are simple. There is a recruitment mechanic where the girls can show mercy and get the help of defeated foes (and there is a collection aspect to it as well), but using them as a weak assist never seemed enjoyable and I almost forgot about it at a couple of points. There were a few small glitches with enemies getting stuck or certain sound effects not registering, but it only hard crashed on me once. 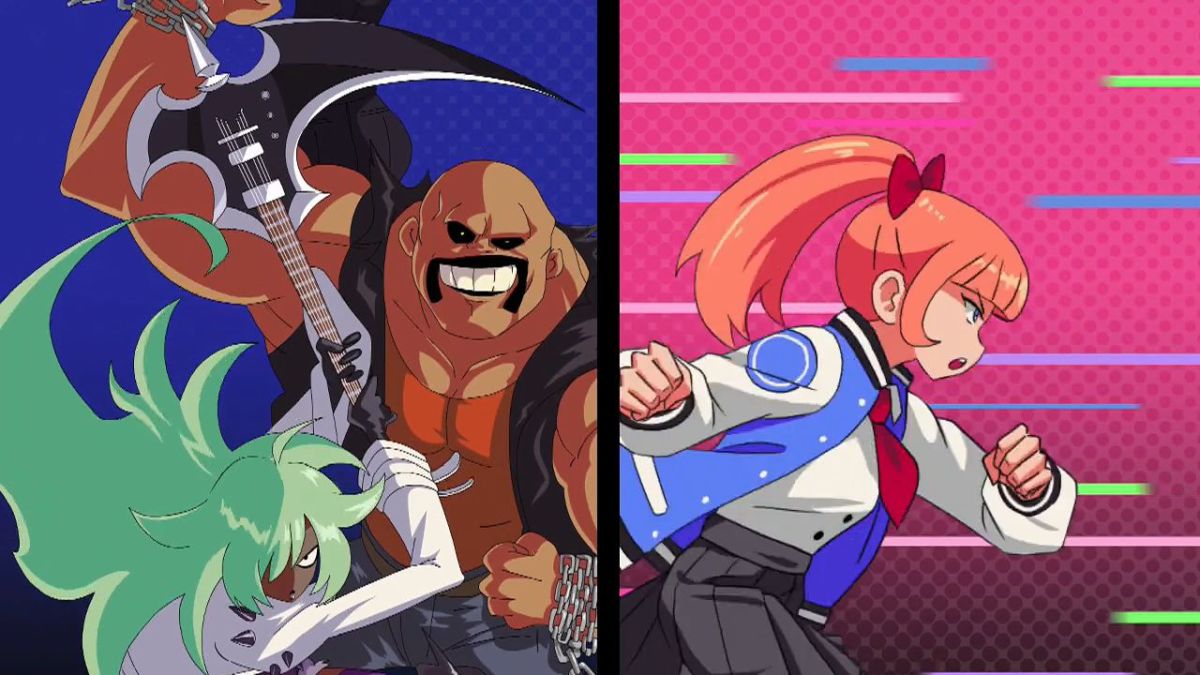 The most annoying thing is that certain buttons are mapped to multiple functions. Square is not only the main attack but also what takes a player to the next area, so often times I’d load in and want to get a jump on my enemies or pick up a weapon, only to be thrown back to the previous area. In multiplayer, the button that performs a ground attack is also needed to resurrect a downed ally, which causes problems if they are too close together. Splitting these actions up would have been immensely helpful.

I always say we need more new modern beat ‘em ups. I find something like River City Girls so refreshing and it reminds me of playing the Scott Pilgrim game, which had taken a lot of its influence from River City Ransom. Now that we can’t buy that adaptation anymore, I’m even more glad that River City Girls has come to save us. The game is a part of a rich franchise, with plenty of references in there to remind fans of that, but it feels like more than just an updated brawler. Though River City Girls may be called a side story in this universe, it has become one of my favorite experiences of the year.

*A complimentary code was provided by WayForward PR for the purposes of this review.

Verdict
One of the original beat ‘em up franchises is back and it hasn’t felt this good to knuckle up in quite a while. As with the games that came before it, River City Girls is a brawler and RPG spliced together to create an amazing and silly adventure that provides a ton of fun.
9