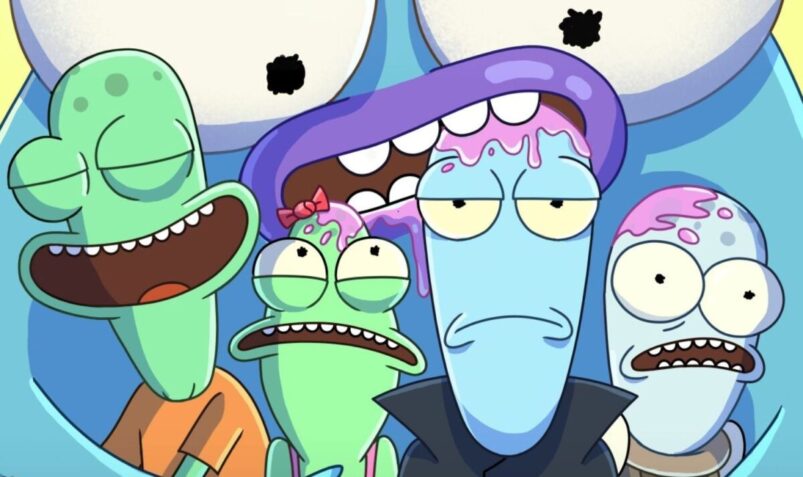 The first season of Justin Roiland’s domestic sci-fi animation Solar Opposites was always going to live somewhat in the shadow of Rick and Morty. Dan Harmon may not be around to lend his guiding hand to the adventures of Korvo and his clan of misfit alien humanoids, but initially it was hard to talk about Hulu’s animated follow-up project without making reference to the Adult Swim megahit that helped spawn it.

This is perhaps an issue that has diminished somewhat as Solar Opposites moves purposefully into its third season. 2021’s sophomore affair felt like a vast improvement on its debut showing, expanding the lore of the mismatched Shlorpian humanoids while also digging deeper into the workings of ‘The Wall,’ the show’s engrossing ‘B’ plotline. If the first season was forever living in the shadow of Rick and Morty, the danger of the third is that it struggles to build on the momentum generated by its second.

This is both a blessing and a curse for Season 3, a mixed bag of great ideas, conflicting expectations and irritating intra-show memes that this third round hasn’t managed to shake off. Back are the evolving family dynamics, a strong suit of Season 2, as are the mind-bending sci-fi adventures and internal machinations rumbling away courtesy of the residents trapped inside Yumlulak’s bedroom wall.

Back, too, are some of the things you’d rather hoped could have been discarded when the chance arose: the overreliance on misplaced ultraviolence, the use of swearing as a joke in and of itself, and endless cultural references that tread the line between irony and sincerity but don’t result in many laughs however you choose to digest them.

It’s a shame that some of Solar Opposites’ most glaring issues simply haven’t been addressed in the gap between Season 2 and Season 3. The incredibly confused tonal style still looms large, so much so that it often feels as though it was birthed by multiple writers and directors all working from different rooms and occasionally speaking entirely different languages.

Solar Opposites dresses itself with the polka-dot and bow combo of the family’s middle daughter Jessie, appearing as colourful and innocent as the banalest offering on Cartoon Network, only to occasionally thrust gratuitous instances of gore and splatter onto the screen at random intervals. The effect can be as jarring as seeing a series of grisly murders perpetrated on Sesame Street.

This dissonance between aesthetics and actual content is one I can excuse. After all, South Park made a name for itself by combing juvenile aesthetics with over-the-top violence years ago. The real issue is when the dissonance plagues Solar Opposites’ actual writing, to the extent that it feels as though a constant duality exists within the mind of its creator and its writers. At points, it strains for the “take me seriously” nihilism of its bigger animated brother, only to undercut itself when Terry, the family’s resident fountain of pop cultural references, fires off an incongruous remark about TikTok or Bad Bunny and we’re left wondering exactly who this is all aimed at.

It’s an issue that smacks you in the face from the very first episode. As Korvo becomes ill thanks to the rest of his companions not pulling their collective weight, Terry complains that “We can’t do our jobs here, not with all the trap queens that need hyping,” a remark squarely aimed either at the under-15 crowd – or else cynical 35-year-olds who understand the statement’s banality and can scoff accordingly.

The problem is that Terry makes such frequent references to contemporary pop culture (to an extent, yes, that is part of the joke) that we’re left to wonder once again where referential irony starts and pandering Gen Z indulgence begins. Kardashian jokes immediately followed by references to 90’s movie Robin Hood: Prince of Thieves don’t exactly sit well together.

Yet sometimes Solar Opposites is so brazenly on the nose that it’s impossible not to be sucker-punched by the aggressive vulgarity of some of its gags. A convalescent Korvo being offered “root beer, Sunny D and piss” and then moodily asking “Is the piss hot? I want hot piss” elicits a surprise laugh because it’s so unashamedly repulsive and stupid, not to mention childish and out of character for the misanthropic patriarch. It’s got all the subtlety of a knob gag riding on the back of a huge fart cloud and will quite understandably turn some viewers off immediately, but those are the instances where I felt strangely won over by Solar Opposites’ peculiar brand of shtick.

Some of this season’s storylines are genuinely terrific, but I’d rather make that assessment on my own rather than have the writers use their characters as mouthpieces for their own satisfaction. I don’t need Tiffany Haddish’s sassy supercomputer Aisha to proclaim “that’s a lot of emotional growth” when Korvo sacrifices his own happiness for the sake of his family. Self-consciously ironic or not, whatever happened to ‘show, don’t tell’?

Events in Solar Opposites do have some semblance of consequence (outside of The Wall’s serialised narrative), but it remains broadly episodic, meaning that our core cast of characters aren’t much different from those that debuted back in 2020, even if they do feel more like a cohesive family unit. That initially feels like a missed opportunity, but it does prevent things from ever becoming too tethered to their own history or lore, allowing narratives to zip around in all directions more freely. Considering that Solar Opposites was always intended to be a more flippant, throwaway companion show, it’s a decision that makes some sense.

The irony, then, is that for a show trying to distance itself from its bigger, more successful sibling, Solar Opposites is at its best when it’s truly reaching for the stars. Quite a few episodes feel like needless filler, especially early on, so it’s by far at its most fun when the training wheels come off and things go supersonic. The exceptional ‘99 Ships’ expands Schlorpian lore by exploring what happened to the rest of Korvo’s race when the asteroid hit, whereas ‘Hululand’ (which has almost nothing to do with the network’s take on a Disneyland-inspired theme park), serves as one of the most delightfully surreal Wall outings thus far.

Solar Opposites continues to be a confused, frustrating and tonally dissonant vision, a mishmash of cluttered ideas, clashing voices and differing sensibilities that often can’t quite establish what it is or who it wants to appeal to. This may simply be due to a lack of consistently strong writing, or it could be that Roiland and co. have deliberately included as much gore, sputum and references to the latest Instagram trends in order to satisfy the Rick and Morty acolytes transferring over to Hulu’s shores. To give the show some credit, I think the answer’s probably closer to the latter.

READ MORE: Did Final Space Really Deserve To Be Cancelled? 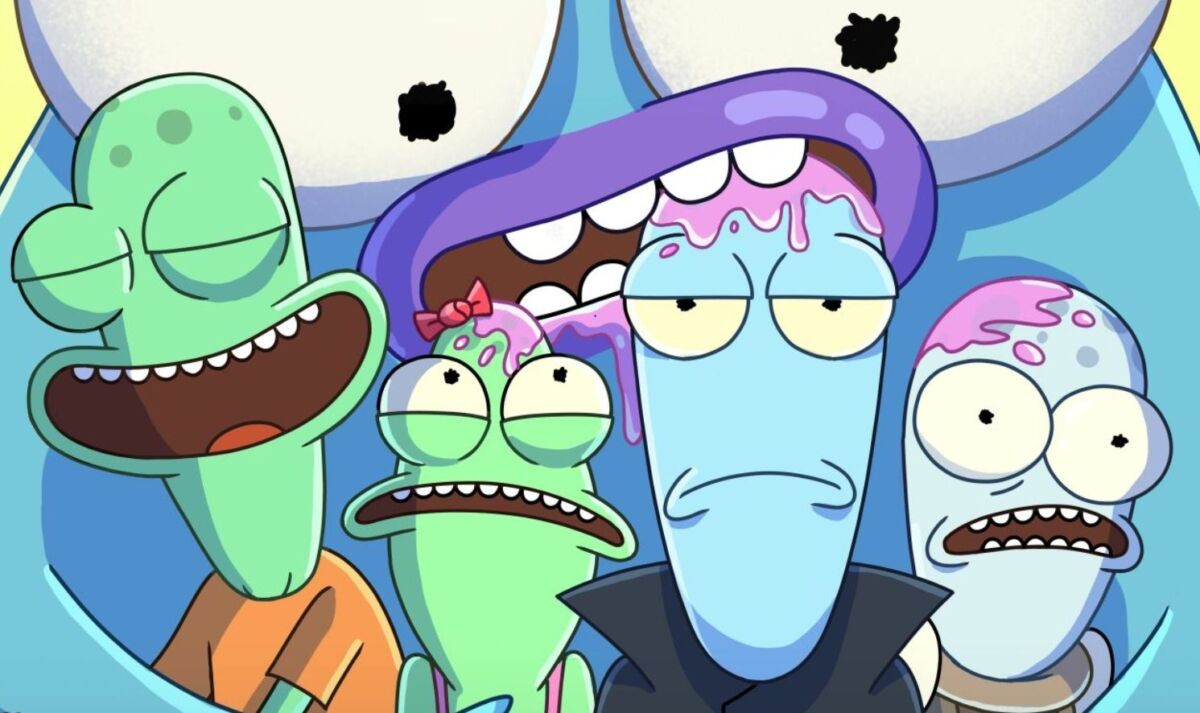 Verdict
Confusing and muddled at its worst but exhilarating and wonder-filled at its best, Solar Opposites truly lives up to its name as a show full of contradictions.
6.5
Cultured Vultures is a pop culture website established in 2013 covering all things gaming, movies, and more. We eat your words.
All The News On The Biggest Games