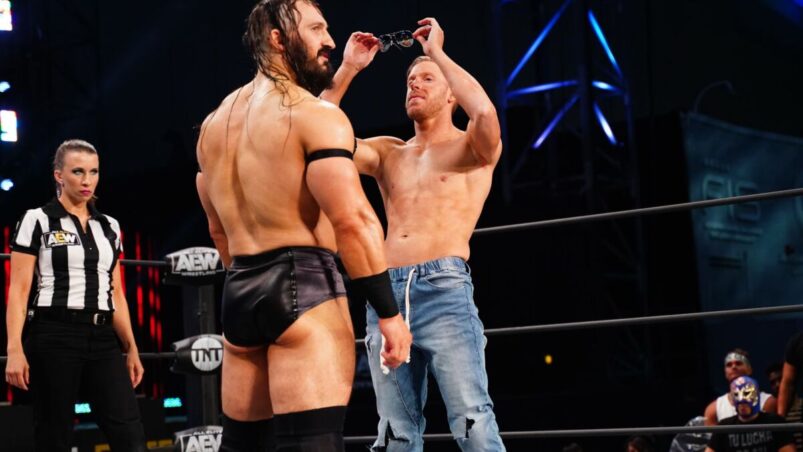 Hulk Hogan and Randy Savage. Steve Austin and The Rock. John Cena and Randy Orton. Vince McMahon and basic human decency. Pro wrestling as a medium thrives on building big-money rivalries, the kind of titanic clash between opposing forces that you simply have to buy the pay per view to see who comes out on top. Among all of the pro wrestling going on today, amidst all of the white hot feuds in every major wrestling company, one pairing has stood out in recent years: AEW’s ongoing rivalry between the lazy layabout slacker Orange Cassidy, and the brooding brutal tryhard PAC. From their iconic clash at Revolution 2020, to their triple threat match for the AEW World Championship against Kenny Omega, to their All-Atlantic Title match at Grand Slam this very week, these two have proven in no time to be a chocolate-and-peanut butter matchup.

First, we have the so-called King of Sloth Style, Orange Cassidy. Clad in faded jeans and a faded denim jacket, with a signature pair of aviator shades blocking his eyes, Orange Cassidy is an oddity at first sight: a pro wrestler who doesn’t seem to care about pro wrestling. It’s not that he hates his job – Orange Cassidy doesn’t really seem to care about anything. He’s billed as hailing from “Wherever,” and weighing in at “whatever.” His theme music used to be “Where Is My Mind” by the Pixies, highlighting his too-cool-for-school, over-it attitude. Now, he comes to the ring to “Jane” by Jefferson Starship, aka the song from Wet Hot American Summer. His signature pose is a half-assed thumbs up. On the indies, Orange Cassidy’s sunglasses were used to signify that he was wrestling while hungover and trying to keep it together. Over time, this gimmick shifted from being wrung-out to being more generally slothful.

In the ring, Cassidy is lazy like a fox – his minimal effort appearance and his disrespectful pose, hands defiantly shoved in his pockets, lulls his opponents into a false sense of security, as is his signature move of delivering a flurry of slow, small, goofy kicks to his enemy’s shins (which the crowd, of course, treats like witnessing a live execution). Cassidy, more than maybe any other wrestler working today, builds his moveset on counters. Whereas other wrestlers open strong and focus on maintaining control in matches, Cassidy plays possum and waits for his opponents to leave themselves exposed. Cassidy wins with his reactions, snap dodges and nimble redirections of his enemies’ offense. For Orange Cassidy, the way to win is to let your enemies do all the hard work and hit them when they slip up.

PAC, on the other hand, is all aggression. The former Neville left WWE on bad terms, after feeling disrespected as Cruiserweight Champion. When he showed up back on the indies and eventually in AEW, the rechristened PAC was billed as a “Bastard” and took great pains to convince us this moniker was earned. His violence and disdain for his competitors was a sight to behold – PAC didn’t want to win his matches, he wanted to end his competitors.

He beat Kenny Omega at All Out in 2019, a shocking turn of events for someone who seemed to be a favorite son for the young-at-the-time promotion. PAC was on a mission in AEW, and that mission was brutality and pain. He joined with fellow high-flyers Fenix and Pentagon Jr. to form Death Triangle, and while he had to disappear from TV for a while due to the COVID-19 pandemic, PAC’s return continued his momentum and his clear desire to not just be respected, but feared.

In the intro of this article I called PAC a tryhard – that’s not an insult. He’s not so showy that he bends credulity like some other wrestlers who might be named Will Ospreay, but everything PAC does in the ring is dripping in effort. His flips have gravity to them, like you can see every muscle straining to propel him forward. His submission hold, the Brutalizer, lives up to its name – and PAC’s perpetual scowl helps sell the damage being done too. PAC is a tryhard in how everything he does, he does with maximum effort, not to show off, but to get the job done.

PAC and Orange Cassidy’s first showdown in AEW was at Revolution 2020, with no titles on the line. PAC simply took umbrage to Orange Cassidy’s shenanigans and those of his teammates Chuck Taylor and Trent Beretta (called the Best Friends, because they are the best of friends). In the build up to the match, Chuck triumphantly crows about how sorely PAC has misstepped in challenging Orange Cassidy. Chuck claims that “this time…[Orange Cassidy] is going to try!” It’s an offhand line that speaks volumes about Orange Cassidy as a character – it’s not that he can’t go hell for leather like his competitors, it’s just that he doesn’t want to. If he can succeed and win matches with his current level investment, why bother doing more?

In the match itself, the emergent story becomes one of PAC’s relentless offense pushing Orange Cassidy to dig deep and actually try, while simultaneously Cassidy’s unbroken focus and unpredictable rhythm progressively getting deeper under PAC’s skin. As the match goes on, PAC gets nailed with several quality counter-attacks by Orange Cassidy, and even though PAC eventually gets the pin, the crowd reaction and vocal support for Cassidy makes it clear that there were no actual losers in this match.

Not long after Revolution, the pandemic began. While PAC is stuck stewing across the ocean, Orange Cassidy feuds with Chris Jericho and comes out on top, his star undeniably on the rise within AEW. The next time the two men meet in a ring, they aren’t alone – they’re both challenging AEW World Champion Kenny Omega, now himself a dastardly heel who deploys the Young Bucks and Don Callis as his underlings every chance he gets.

The match feels like a bit of a foregone conclusion at the time – it’s too early for Final Boss Kenny Omega to drop his title – but still, from bell to bell, all three men make it feel like anything could happen. Cassidy’s opportunistic style excels in a triple threat, where he can capitalize on the other two men’s offense and minimize his own risk. He and PAC have brief moments of synergy, working together against Omega before inevitably turning on each other again. While Omega lives to fight another day as champion, both PAC and Cassidy leave this match having proven to the world that while they aren’t world champion yet, both men easily have the guts and grit to hold the big belt one day.

This brings us to this week’s Dynamite, where Orange Cassidy challenged PAC for the All-Atlantic Championship. PAC is the inaugural holder of this championship, while also being currently one of the Trios Tag Champions with his pals in Death Triangle. 2022 has been kind to the bastard. Yet again, they clash, and yet again, PAC comes out on top, but something is definitely different in this bout. Familiarity between these two men means they know each other’s tricks – the result is the shortest match of the three listed here, and the one wherein both men are most dependent on countering each other. PAC still can’t bring himself to accept whenever Cassidy gets a hit in, and Orange still struggles to survive the unending brute force slamming against him. For now, PAC remains victorious, but multiple close calls remind him of the danger of underestimating his opponent. The next time they meet, Cassidy might finally have PAC’s number.

Despite having only met in the squared circle a handful of times, PAC and Orange Cassidy clearly have the secret sauce of an all-time rivalry. The enmity between them goes beyond disliking each other, beyond scathing promos and verbal throwdowns. These two men are diametrically opposed in every fabric of their being – their ring attire, in-ring style, even the attitudes they have with their allies (Best Friends as opposed to Death Triangle, the analysis isn’t hard to parse).

Orange Cassidy represents both a work smarter, not harder mentality and a modern frustration with having to apply ourselves day in and day out. Who among us hasn’t wanted to throw some shades on and nap in broad daylight at our day jobs? PAC, on the other hand, is the untameable power of human will, a mad animal who refuses to be tamed. Sly rebellion vs. overt hostility. Every time they’ve met in the ring, they’ve made magic, and hopefully they’ll keep the fires burning for each other for years to come.