On the Road: Berlin – History 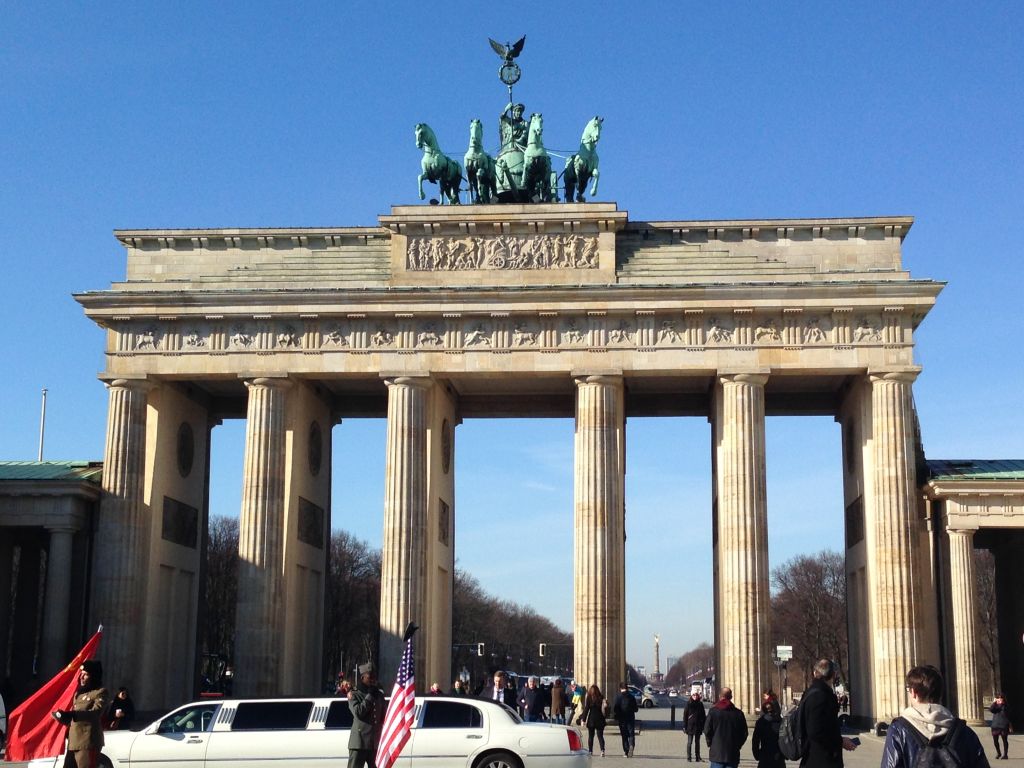 Alex McInnes takes a walk through the history of Berlin for the On the Road series.

As I mentioned, a big draw to Berlin for me was the history. Monday was spent monument and museum hopping. I first made my way in to the centre of the city, to the iconic Brandenburg Gate, which is important for all manner of reasons but probably most widely depicted in 1989’s bringing down of the Berlin Wall, a wall that divided a city and an entire country for 28 years.

My main historical interest as long as I can remember has been the Nazi persecution of  groups such as Jews, Gypsies, Homosexuals and the Disabled, of which millions died in the Nazi’s ‘final solution to the Jewish question’. I visited The Memorial to the Murdered Jews of Europe, which is an impressive sprawling sculpture of rectangular cement blocks that vary in height, added to the sloping floor the further you walk in – its aim is to disorientate and confuse you, just as the many victims were. It works. What blew my mind the most about that was the amount of tourists laying  and climbing all over the memorial, whilst taking ‘selfies’. The thing that topped it off for me was seeing a discarded Starbucks cup in the middle of it all, that stood out to me quite a bit.

I  then found my way, getting very lost, to the Topographie des Terrors, which is located on the former Gestapo and SS HQ, detailing all of their atrocities. So far that all sounds pretty gloomy but the afternoon took an upward turn. Whilst having lunch I received a phone call inviting me for a job interview on my return which put me in a pretty fantastic mood. I’m currently trying to start a new chapter in my life so that’s definitely a positive. The day got even better when a very pretty Russian girl started talking to me on the U-Bahn, she was intrigued by me, which really is a rarity, and she asked me to put my name in her phone, I obliged. By doing so I missed my stop but I didn’t care so much seeing as I was on such a high. Carrying on from my day highs I made my way to the Kilkenny’s, the Irish bar at Hackescher Markt and spent the evening necking glorious German beer and talking to locals. Wunderbar.

Being the cheapskate that I am, Tuesday’s breakfast consisted of TUC crackers and a bag of McDonald’s sliced apple…the two actually make for a surprisingly nice combination! I then got my sorry ass out of bed and headed for the Zoologischer Garten station from where I was to meet a tour group and take part in a 4 hour historical walking tour through Berlin. It was interesting but not as good as I thought it would be. The tour guide was a knowledgeable guy but he was a late 20 something hipster from New York who was very opinionated, which is fine, but he was generally very cynical on most of the things he discussed and by the end I was rather glad to slope off on my own.

Another thing of mine whilst abroad is trying to not look too much like an obvious tourist so I tried picking up a little German (language not a minor). My German was pretty much  next to nothing, just yes, no, please, thank you, hello, goodbye etc. I tried to be as German as I could but my lack of language probably just rendered me a very abrupt fake German. I tried. My next port of call was the Deutsches Historisches Museum, which is a goliath of a building. It details German history from the very earliest recollections right through to the fall of the Berlin Wall. Again it was really interesting for the most part but call me ignorant, the history of the 1600-1800 period does not appeal to me one iota, it’s just a load of silly incestual men or boy kings with massive Brian May hair… not my bag. I spent the rest of the remaining daylight sitting by the Spree River reading ‘The Book Thief’ and watching local Art students sketching some of the stunning architecture of nearby museums.

6.48 am on Wednesday. I awoke with a sharp pain towards the top half of my back. I had somehow pulled something whilst sleeping, obviously having a very physical dream, say no more… I didn’t leave my hotel until midday or so, I spent the majority of the morning feeling sorry for myself, eating TUC & Apple and reading an NME special edition on the early years of Nirvana. When I finally sorted my shit out, I was heading to Potsdamer Platz, another main centre to the city. There’s actually a few different centres, Berlin is a behemoth of a city, much bigger than I’d ever imagined. It took some walking and getting lost but I finally found the Gedenkstaette Deutscher Museum, the Museum of German Resistance.

This was well hidden away so it was quiet and it was a truly classy exhibition detailing the opposition to the Nazi regime within Germany at the time, a lot of which I was unaware of, it gets papered over a lot. From there I had no real plans for the rest of the day so just walked around Potsdamer Platz and grabbed a Pretzel and a can of Krombacher and continued my ramblings in the fading sun and before I knew it I was at the Reichstag building but by then my brain was melting from all the history so I did what any Brit in Berlin would do, headed back to the Irish bar where I ended up drinking the evening away with a Scotsman, two Irishmen and a fellow Englishman…it may sound like the start to a joke but that was seriously how I spent the night.