It's October and it's getting dark sooner. 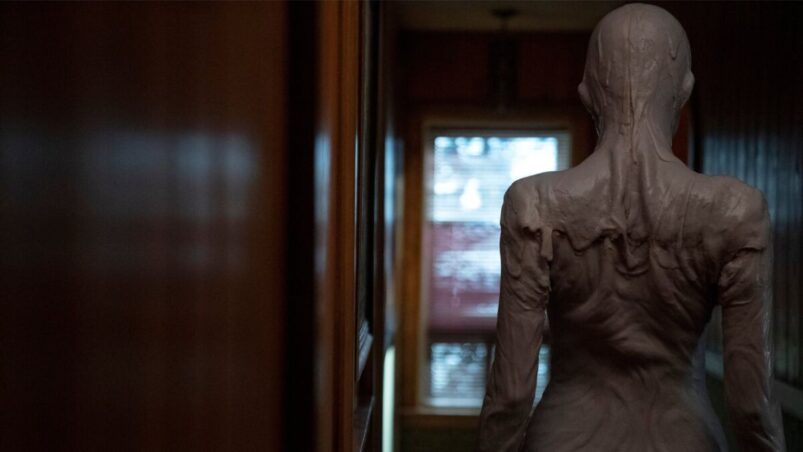 Despite my natural aversion to desperately twee phrases like ‘spooky season’ and ‘spooktober’, this October is, unsurprisingly, replete with content that’s on the spookier side. Most of the all-time classics of horror (eg the actual film Halloween) came out at about this time of year. Granted, the original Friday The 13th was inexplicably a May release, but it did at least come out on a Friday.

Here are the biggest new TV shows of October 2022.

AMC have apparently secured the rights to fully eighteen of Anne Rice’s many, many books about vampires, so, you know, no pressure for this one to do well. Interview is the famous one, though – previously adapted as a film in 1994, with Brad Pitt and Tom Cruise, before Twilight tarred the whole vampire genre by association. Here Pitt and Cruise have given way to Sam Reid and Jacob Anderson.

Never mind Twilight, though – if Rice’s decadent, bisexual vampires are trying to knock anyone off their perch these days, it’s What We Do In The Shadows. These ones might take themselves more seriously, but are no less campy for it. The story’s based around an actual interview, a celebrity-style tell-all expose of all the jolly hijinks they got up to in New Orleans back in the day.

Your child being kidnapped is probably the best example of what is called an ‘adult fear’ – easily beating death and taxes, since those, at least, are only happening to you. A Friend Of The Family is based on a true story when an ordinary suburban family had their daughter (played by Mckenna Grace) kidnapped, repeatedly, by a family friend (Jake Lacy).

Many synopses and elevator pitches seem purpose-designed to beg questions, to make you want to know more, and this one’s a doozy – the first question, of course, being ‘why didn’t they call the police after the first time it happened?’. Though since it’s based on real events, it would probably be insensitive to misquote Oscar Wilde and say that to have your daughter kidnapped once is a misfortune, but to have your daughter kidnapped twice, or more, starts to seem like carelessness.

In a way this seems a little like bolting one spooky concept onto the side of another. We all know the old tradition of staying up late telling scary stories around the campfire – but what if it wasn’t a campfire, what if it was a hospice, because you’ve got a terminal illness?

For the unlucky kids actually telling these tales, that probably raises the bar (“oh, the witch always kills them on their 30th birthday? Yeah, let’s see her try that on me”), but for the audience it’s starting out from already spooky ground before knocking things into fifth gear.

The Midnight Club is created by Mike Flanagan, he of The Haunting Of Hill House – in essence, Netflix’s go-to guy for the Halloween season. Our sick kids are played by Adia, Igby Rigney, Ruth Codd, William Chris Sumpter, Aya Furukawa, Annarah Shephard, and Sauriyan Sapkota, with Heather Langenkamp (Nightmare On Elm Street’s original final girl) as the enigmatic doctor who runs the hospice and is surely up to something.

Escapism is the name of the game in the media. People flock in their droves to convincing fantasy worlds, even the kinds with no electricity and no civil rights, since it certainly beats this. So it’s perfectly understandable to have Chloë Grace Moretz’s character casting desperately about for any alternative to her fairly bleak life.

And what an alternative it is! An experimental new virtual reality device – not like Oculus Rift, completely different from Oculus Rift – that can take you away into whatever setting or backdrop you’d like. Unfortunately, as in so many classic episodes of Star Trek, there’s the distinct suggestion that the simulations are becoming real, and probably hunger for human flesh.

The Peripheral is produced by Lisa Joy and Jonathan Nolan, the people behind Westworld, which was once a badge of honour until that show disappeared completely up its own backside. However, The Peripheral is adapted from a novel by William Gibson, the father of cyberpunk, who hopefully will be able to keep a firm hand on the tiller from beyond the grave.

Originally titled 10 After Midnight, if you had to pick a face who could take on an Alfred Hitchcock Presents style-anthology like this one, Big G’s the very chap. Of the stories on offer, two are by Del Toro himself, and two are adapted from the works of cosmic horror master and famous racist H.P. Lovecraft, a giant of the genre who Del Toro’s always been drawing on a little bit.

While the various streaming services of the world are in a weird, uncertain stage with how they should release TV shows (the acrimonious split between the binge camp and the weekly camp), Guillermo Del Toro’s Cabinet of Curiosities is releasing two episodes a day in the week leading up to Halloween. This isn’t strictly what is usually meant by ‘event television’, but those after a scare in this special time of the year shouldn’t be disappointed.