The Haunting Of Hill House’s Funeral Episode Is Phenomenal 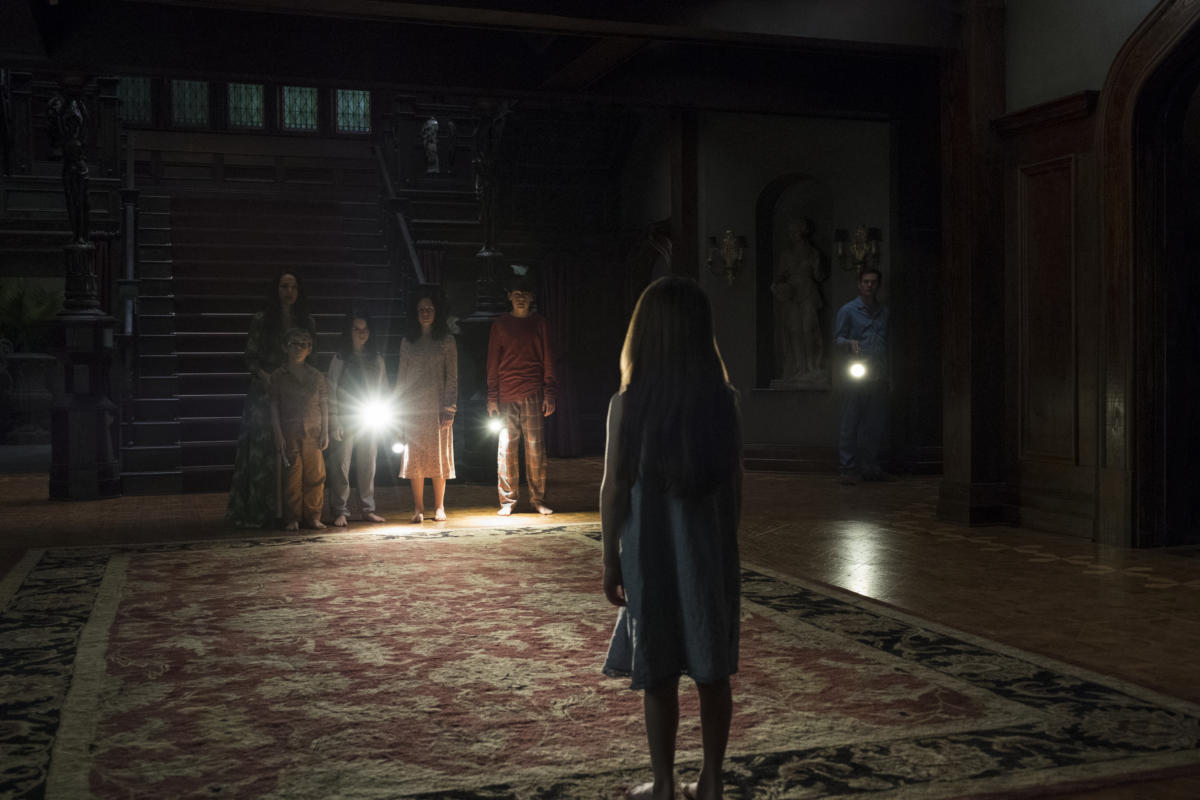 The below does not discuss whose funeral it is even if it is quite literally in the official synopsis for the show, but here’s the spoiler cat anyway.

I have all the time in the world for bottle episodes. Breaking Bad’s “Fly” remains the best hour of character development and writing that I’ve ever seen on television while Mad Men’s “The Suitcase” only lags slightly behind. Even if it isn’t quite as contained as those already mentioned or not even really a conventional bottle episode, the sixth episode of The Haunting of Hill House deserves to be in the same conversation.

Recently released on Netflix, Mike Flanagan’s ten-episode adaptation of Shirley Jackson’s novel splits the focus between the past and present lives of the Crain family, showing their lives while living in the titular Hill House and when they are also well shot of it — or so they think. The sixth episode continues that same principle, though with some of the most astounding cinematography you’re ever likely to see on the small screen.

For the first time in a long time, the Crain family are all together in one location: a funeral parlour. Utilising the one-shot to almost impossible precision, Flanagan and co. make the twenty minute scene that opens the episode feel like two. Long tracking shots follow the Crains around, watching intently as the inevitable drama unfolds and the butting of heads begins.

An early moment is one of the standout scenes of the season in which the absent patriarch walks through the door to awkward silence. All in one shot, the camera pans around him to see his children as their younger selves before spinning back around to show them as they are now. It’s a wonderful technical achievement that’s no doubt the result of plenty of scarpering from the actors, but it illustrates the father’s mindset perfectly. He’s not always there, but he has always loved them.

The opening sequence eventually gives way to a different location, but not before a sumptuous transition. The camera again focuses on the father as he makes his way to the bathroom before he turns a corner and finds himself back in Hill House. It’s a seamless switch, which then kicks off another one-shot sequence that is smartly introduced with a simple cut. I often find that ending a one-shot can feel abrupt, but not here.

From there, we’re taken to the past in Hill House during a stormy night. The adults and children converge in the lobby after a chandelier is falls from the ceiling and we’re again tracking different members of the family as they try to remain calm. This sequence is even more remarkable than the last in that there are five child actors who are always swapping places and have some tough lines to remember.

The rest of the episode follows this pattern and never really lets up, even if Steve (Michiel Huisman) comes dangerously close to flubbing his lines on a couple of occasions, as well as a fall from Theodora (Kate Siegel) not really looking all that convincing. Crucially, the sixth episode of The Haunting of Hill House isn’t just an excuse for Flanagan to show off — it also builds the characters and is damn scary to boot.

The long panning shots offer ample opportunity for scares with the use of nothing but diegetic sound meaning that they are organically earned rather than cheated out of the viewer. Lightning strikes illuminate the Bent-Neck Lady in the background at some points, but even a simple pan where she comes closer each time Steven looks behind him is hugely effective. The episode constantly has you on edge that builds and builds but wisely fizzles out — a sudden jumpscare factory would greatly diminish the character development on show.

While I may not have fallen utterly in love with the way The Haunting Of Hill House wrapped things up, everything up to and including its superb sixth episode was the best horror I’ve ever seen in a TV show. Compared to American Horror Story, which uses the term horror loosely to just be a bit kooky, The Haunting of Hill House is a meditative and slower affair that rewards patience, much in the same way that its sixth episode must have asked the most of everyone involved to deliver what is a masterpiece in television.