You're coming with me. Please? 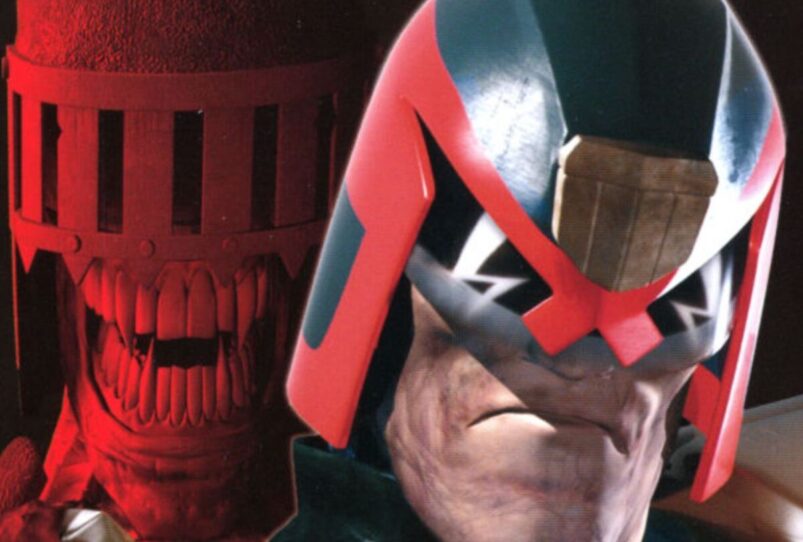 While there’s always cries for new Jak & Daxter, Syphon Filter, and Ape Escape games to name just a few, it’s recently come to my attention that a certain powerful chin hasn’t had a video game adaptation since 2003. Despite being one of the gamiest characters ever made, what with the gun that’s straight out of Mothergunship and general badassery of someone like the DOOM Slayer, Judge Dredd hasn’t graced a video game console in almost two decades.

Judge Dredd: Dredd Vs. Death was the last proper release way back near the start of the century, a game I have all the time in the world for, even if critics at the time didn’t. Reviews were unkind to Dredd Vs. Death, a relatively straightforward FPS in which Dredd takes on Death (you’d never have guessed it) across Mega City One, perhaps due to the year it released. I mean, 2003 also saw the release of The Simpsons: Hit and Run, Enter The Matrix and Need for Speed: Underground, so the reviewers must have been spoilt.

For me, though, as a wee boy whose eyes had been opened to bloody, glorious violence thanks to Metal Gear Solid 2, Judge Dredd: Dredd Vs. Death was an absolute whale of a time on my PS2 some seventeen years ago, especially when you could arrest anyone for the crime of existing and there was a special button just for saying Dreddisms. Was it objectively incredible, transcendent, and everything you’d want from a video game? No, but it didn’t need to be — in many ways, Judge Dredd: Dredd Vs. Death was the perfect rental game, the kind of lazy afternoon experience that doesn’t seem all that common in the mainstream these days.

It was actually one of the first games I bought when my eyes were opened to the wonders of Steam (“What’s that, the seminal and largely forgotten GUN is on here for just a couple of quid? Well, this changes everything”), many years after I first bought it from a GAME where the employees had clearly stopped caring. Despite it sitting in my library for so long, I only just got around to playing it and while it obviously holds up about as well as Steve Buscemi trying to keep a caravan aloft graphically, I had an absolute blast while blasting zombies away and arresting perps.

The great thing about Judge Dredd: Dredd Vs. Death is how authentic it feels to the Dredd experience, even if it does boil the wider universe’s many layers down to “go here, shoot there”. The Lawgiver is a fantastically fun weapon with you able to switch its modes on the fly, including one that puts your enemies on fire, them withering away into a skeleton in a surprising level of detail for an almost twenty year old game.

That’s not where the game’s surprisingly decent fidelity ends, though. I really tried to not word this in a weird way, but it’s impossible: there’s an obese female character who keeps popping up with “jiggle physics” that wouldn’t look out of place today. I was compelled to watch her trundle along, but not in that way — get your mind out of the gutter. Dredd Vs. Death isn’t a revolution, but thanks to its daft but fun arresting mechanic, great physics, and random energy drink adverts, it’s a lot more ahead of its time than people give it credit for.

A new Judge Dredd game would, without doubt, be quite the spectacle in more ways than one, but it just doesn’t look like it’s on Rebellion’s agenda.

Since Judge Dredd: Dredd Vs. Death’s release in 2003, all we’ve had is mobile games, which feels wasteful at best. Judge Dredd is custom-made for an open world romp, especially in the absence of games like True Crime and Sleeping Dogs where you play as the law, as well as the ongoing absence of many urban-based open worlds in general. As much as I love being one with nature in a lot of contemporary open worlds, there’s something to be said for mingling among the muck in a city — and then cleaning it up as Dredd.

I’d stop short of saying a new Judge Dredd game should be a “GTA clone”, though another Rockstar property might point the way forward: LA Noire. Being able to investigate crimes and interrogate criminals as Dredd would make almost too much sense, and perhaps it could even be the Prey 2 we never got, with you having to hunt down bad guys in a futuristic setting. I’d also be more than down for just another game like Dredd Vs. Death though, a straightforward shooter that lets me put that big helmet on for an afternoon.

The lack of Judge Dredd only gets more puzzling when you realise that Rebellion, the minds behind Sniper Elite and Zombie Army, hold the license, as well as the whole of the 2000AD catalogue. Maybe a Dredd adaptation is a trump card they’re holding onto, their biggest ever game that they want to make sure they get absolutely right? Rebellion could’ve also been made wary by the 2012 movie’s relatively underwhelming financial performance, but with the Mega City One TV show on the way, it might be time to open the Dreddiverse up once again.

READ NEXT: Warhammer 40,000: Silly With A Serious Face